Credibility and experience, especially in the world of racing, can take years to develop. In the case of SARD Co., Ltd., this heritage began in 1972, when it was known as Sigma Automotive Company. Within a year, Sigma Automotive began competing on an international level, becoming the first Japanese team to campaign a Japanese car in the 1973 24 Hours of Le Mans with its Sigma MC73 racecar (though it was forced out after 79 laps). Sigma Automotive went on to compete in the 1974 event with its Sigma MC74 which completed the race but failed to cover at least 70 percent of the winner’s laps. Regardless, a great impression was made by the Japanese team. 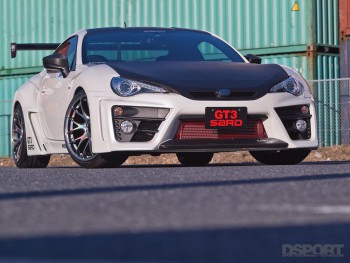 In 1985, the company changed its name to Sigma’s Advanced Research and Development Company, Limited (SARD). Since then, SARD has allied itself with Toyota on several occasions and has participated in a variety of racing endeavors, from Group-A and Group-C competition to the All-Japan Grand Touring Car Championship (renamed Super GT in 2005). For its efforts, SARD has collected a broad variety of accolades throughout the years.

While its racing heritage is impressive, the primary focus for SARD lies in its products and product development efforts. SARD offers a wide range of both application specific and universal solutions, from engine components to aerodynamics. When Toyota released the 86 in Japan in 2012, SARD’s development team was quick to acquire and analyze the new platform, resulting in the creation of numerous new products for the ZN6/ZC6 chassis and the FA20 engine. 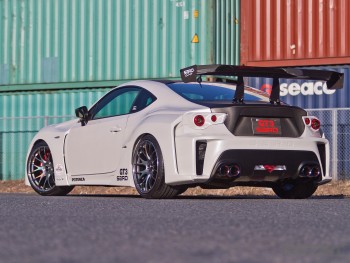 Nothing creates a greater sense of urgency than an event invitation, and the “Options Magazine 86 & BRZ World” exhibit, scheduled for the 2014 Tokyo Auto Salon, proved a great motivator for the SARD development team. We spoke to the division manager of Lexus Team SARD, Takafumi Kondou, to get insight about the build. “To create the greatest impact, the original plans involved a V8 engine swap to go with the more aggressive aerodynamics and aesthetic enhancements,” he said. “However, given the limited amount of time before the show, we decided to shelf the V8 idea and work with the FA20 engine that comes with the car. But in order for the engine bay to be remotely impressive, we needed to increase the FA20’s output with some sort of forced induction.”

Since just about any performance increase results in increased engine temperatures, measures were taken to preempt overheating issues in the engine bay. A SARD custom radiator increased the capacity of the cooling system, while a SARD oil cooler helps extract heat from the oil in the crankcase.