Over 20 years ago, I was promised the world. Send me your Talon’s center differential and I’ll cryo treat it and it won’t break anymore. The factory two-spider gear center differential is a known weak link once the transfer case and axles are upgraded on the 1G DSM. Guess what? The cryo-treated gears in the front differential broke just as quickly as the non-treated gears. Since the cryo treatment of the gears didn’t help in this instance, I ended up getting an aftermarket Cusco center differential (with four spider gears) and never had an issue. My first experience with the cryo treatment of a part was a bust and I became a skeptic. Fast forward to today, and cryo treatment is prevalent in firearms, cutting tools and even some automotive parts like brake rotors. Based on first-hand accounts and numerous white papers, there are definite instances where cryo treatment delivers benefits. It’s equally important to understand that not all cryo treatments are created equal and that not all materials will benefit from the process. To get you up to speed on the ins and outs of cryogenic treatment of materials, we’ve put together our Cryo 101 series. In part one, we will take a brief look at the history of cryo treatment, how it works and what benefits can be realized. We will also be launching our own long-term testing of cryo-treated brake rotors. 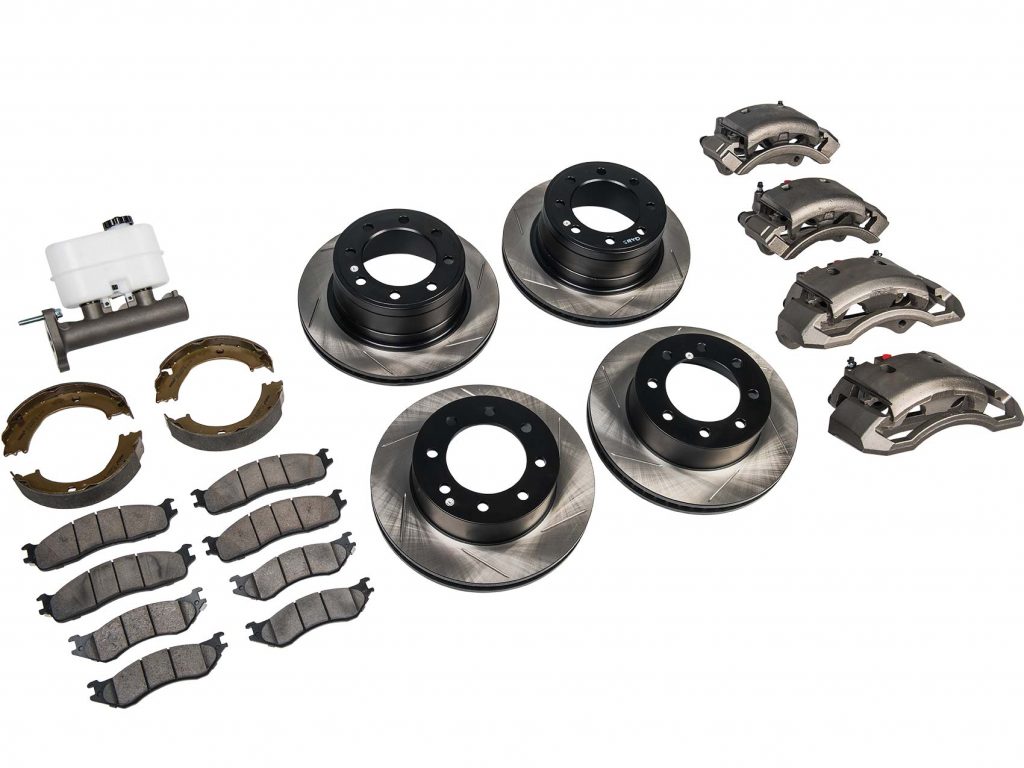 When James Dewar, inventor of the dewar, figured out how to build an insulated container that could keep gasses in liquid form in 1892, the science of cryogenics was underway. Ever since engineers and scientists have had access to liquified gases at ultra-temperatures to perform experiments. During World War II, experiments found that high-speed steel cutting tools would exhibit a dramatically increased service life with a cryo treatment. The tools would be immersed in liquid nitrogen for a brief period of time, and then allowed to warm up to room temp. Some tools would crack from the thermal shock of the rapid temperature change and others would become brittle from this crude procedure. However, the tools that survived would stay sharp longer and deliver a better finish. 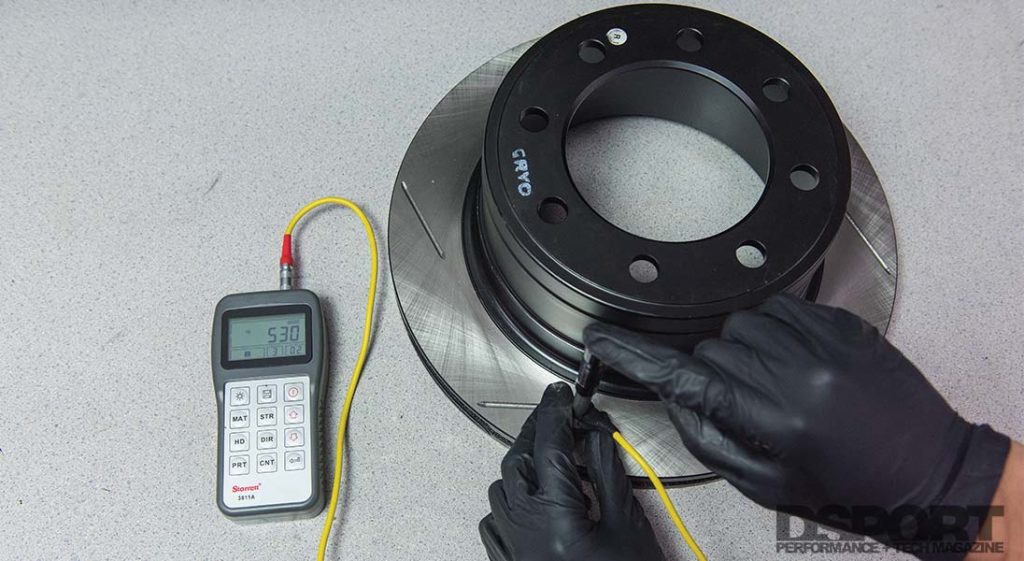 Using our Starrett 3811A compact hardness tester, we measured the hardness of both the cryo- and non-cryo-treated brake rotors before putting them into service. We will be taking measurements at regular service intervals to see if the hardness changes over time.

If you watched an episode or two of the History Channel’s Forged in Fire, then you probably have a basic idea of how heat treatment of steels works. The smiths work the metal to shape at elevated temps. At some point, they quench the blade by dipping it into room-temperature oil that hardens the material. This process hardens the metal but also traps-in a significant amount of stress that sometimes shows as a warp to the blade or a crack. From a scientific standpoint, there are many different phases that a ferrous alloy can be arranged including austentite, allotriomorphic ferrite, idiomorphic ferrite, pearlite, widmanstatten ferrite, upper bainite, lower bainite, acicular ferrite, martensite and cementite. Some of these can only exist at certain temperatures and some form based on the rate of cooling from the austentite state. Bottom line is that the elevated temperatures and cooling rates used in the heat treatment of ferrous metals establishes the mechanical properties of the material in terms of hardness, strength and toughness. 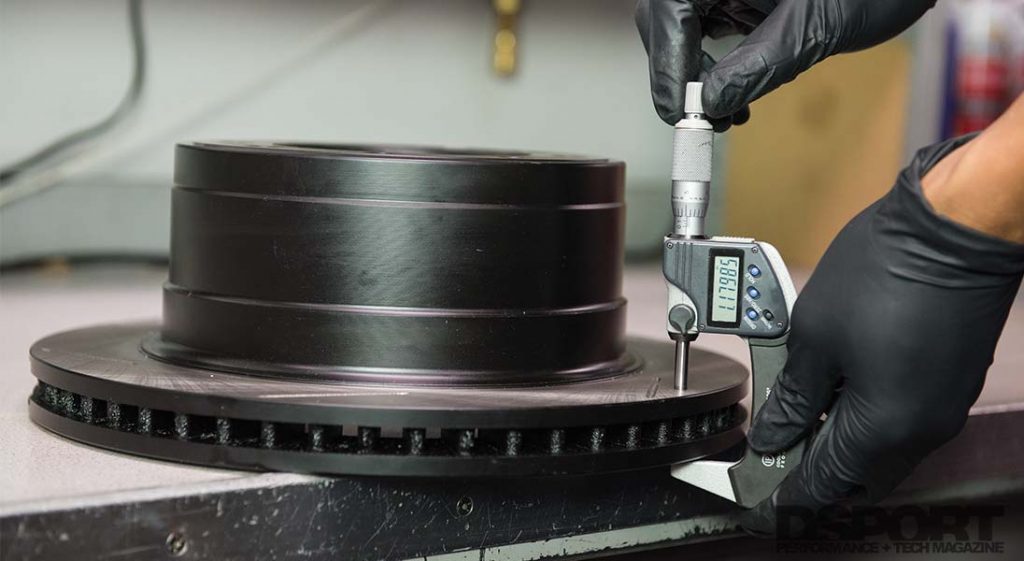 We also measured the thickness of the rotors before putting them into service. At regular intervals, we will measure again and see if the rotor wear is changed due to the cryo treatment.

Just as the heat treatment of metals accomplished through heating and cooling, cooling metals down close to absolute zero (deep cryo is at least -190C) can also change the performance of the metal. When austenitic steels are subjected to proper deep cryogenic temperatures, the material also responds with a change of retained austentite into martensite. This is the same phase change that occurs when a steel is quenched. Hardness and strength are increased. At the same time, fine carbides (eta carbides) are also formed. These hard carbides are very resistant to wear. In addition, residual stresses are reduced. With tungsten carbide, the cyrogenic treatment transforms the softer phase structures to a harder phase structure to increase hardness. With materials like cast iron, marked performance increases can result although the exact mechanism for how it happens isn’t completely understood (cast iron is pearlite and doesn’t have the conversion of austentite to martensite taking place).

In case you missed it, the point being made is that there is probably more unknown than known about how the cryogenic process improves material performance. As a result, a cryogenics treatment database organization exists online where researchers share findings on the processing of different materials and parts. Some of the data is purely informational while other articles are more scientific. 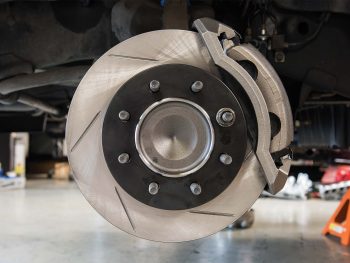 Because the cryogenic process is still relatively new, there aren’t established processes and procedures in many cases. The quality of the process is heavily dependent upon the company selected. With my first experience, I don’t know if the cryo treatment done was a dipping of my part into liquid nitrogen or if there was actually a controlled process followed. In the end, it didn’t help. The reality is that some materials and/or some parts will show greater improvements than others.

In terms of automotive parts, brake rotors seem to have some of the best reported results from the cryo treatment process. Race teams and fleets tell stories of cryo-treated rotors lasting two to five times longer than untreated rotors. Our plan is to conduct our own testing on both brake rotors and some cast-iron engine blocks.

Our 2005 RAM 3500 pickup has served us admirable for the past 15 years as we’ve put close to 200,000 miles on the Cummins 5.9L engine. While the engine has performed flawlessly, the braking system on the vehicle has been plagued with extremely short service life for rotors. We could think of no better candidate for a rotor life test bed. 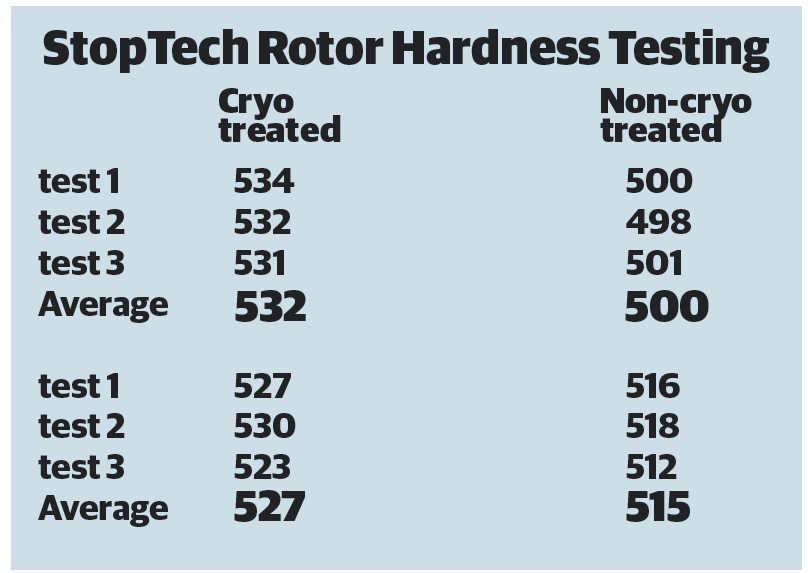 To eliminate any possible sources of error, the entire brake system was refreshed with StopTech and Centric components. A new master cylinder, new calipers, new brake hardware, new hydraulic hoses joined new rotors and pads. One of the front rotors was cryo-treated and the other was not. One of the rear rotors was cryo-treated and the other was not. We also rebuilt the front suspension, installed new front hubs and put on a set on new dampers to ensure the truck would behave as it should for the test. We tested the hardness of the rotors and measured the exact thickness of the rotors. We will be taking measurements during the life cycle of these pads and rotors to see how much (if any) the cryo treatment helps this problem child of a rotor killer.

Even before the test started, we did see higher hardness values from the cryo-treated rotors. In theory, that should translate into lower wear rates. How much? We will just have to wait and see.