You are at:Home»The Tech»Education»How LED Technology has Modernized Automotive Lighting | All of the Lights

How LED Technology has Modernized Automotive Lighting | All of the Lights

What do ultra-thin televisions, energy-saving light bulbs and your buddy’s new tactical flashlight have in common? They’re all likely powered by LEDs. LEDs, or light-emitting diodes, have been around for many years now. Originally used in infrared applications and as indicator lights in electronic devices, early LEDs suffered from low intensity and color limitations. However, modern LEDs now combine the energy efficiency, small footprint and fast switching common to LEDs with a wide range of colors, increased brightness and a wide variety of automotive applications. Ranging from LED drop-in bulbs to full headlight and taillight replacements, both OEMs and the aftermarket offer various options to update the look of your ride.

Before trying to understand the science behind LED bulbs, it’s important to understand how traditional incandescent bulbs work. An incandescent bulb utilizes a glass outer structure with a thin, coiled tungsten filament placed inside. To create light, electricity is passed through a conductor and the tungsten is heated to a point at which it gives off light. Unfortunately, much of the energy used is given off as heat, and only about 10-percent of the energy is used to create light. This is why light bulbs get very hot to the touch.

On the contrary, while an LED may be referred to as a “bulb,” an LED is actually a diode. Put simply, a diode is a device composed of two conductive materials placed in contact with one another, allowing current to only flow in one direction. This is why LEDs are polarity-specific and only work when plugged in one way. When electricity passes through the diode, the atoms in the first material are overloaded with energy. This energy needs to be passed to the other material in the diode, a process that produces light as a byproduct. Since this process doesn’t require heating an element or any large housing, LEDs can get by with much lower voltage, current and space requirements than your typical incandescent equivalents. 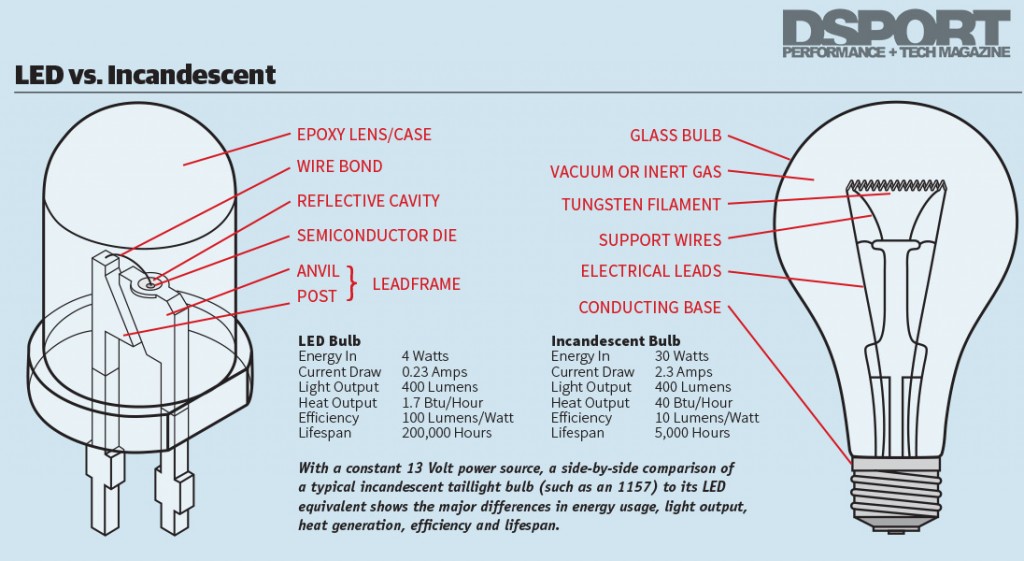 Unlike incandescent bulbs that can flood light in all directions, a single LED will only emit light in one direction. LEDs are directional and require multiple LEDs facing in different directions to create a “flood effect.” This shortcoming pushed manufacturers of plug-and-play LED bulbs to develop creative solutions for proper light diffusion and illumination. Since the bulb housings and reflectors of most vehicles are designed
for use with incandescent bulbs, many plug-and-play LEDs can deliver less-than- desirable light output.

One early solution to address the directional nature of LEDs was to cram hundreds of small LEDs onto one tower bulb and claim its performance by the sheer number of LEDs. However, these bulbs usually performed poorly due to the dim, low-quality LEDs used. In direct sunlight, many of these tower-type bulbs fail to illuminate anything. We recommend staying away from these types of LEDs as they’re usually a downgrade from the original bulbs in terms of quality, light output and illumination. 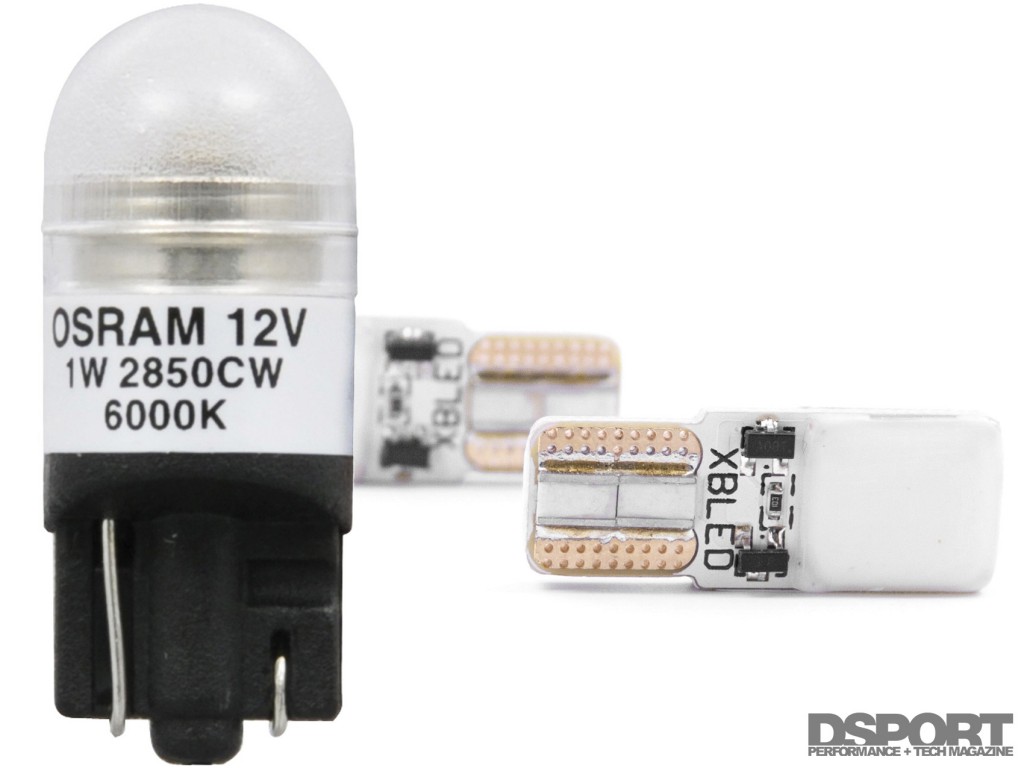 Both of these bulbs are designed to fit the common 194/T10 wedge socket, but they are two entirely different designs. The OSRAM unit (left) sports a single LED and diffuser for an illumination pattern similar to an incandescent bulb, whereas the Morimoto XB LED (above) features two high- powered COB leds for side-to-side illumination. Ultimately, size limitations and reflector type will dictate the best bulb for any specific application.

The Benefits of LEDs

With plenty of LED options available on the market, large OE lighting suppliers such as OSRAM and Philips also offer a line of aftermarket LED products. In addition, companies like The Retrofit Source that specialize in aftermarket lighting solutions have developed plug-and-play LED bulbs that outperform many other LEDs currently on the market. Not only do these bulbs utilize some of the highest quality CREE and COB (circuit-on-board) LEDs currently on the market, they also incorporate proprietary diffusers and designs specifically made to suit automotive applications.

Most import vehicles use a combination of bulb types so it’s important to check compatibility before purchasing bulbs. Sylvania has a great online database of the various bulbs required for almost any vehicle. Search: “Sylvania Automotive Bulb Guide.” 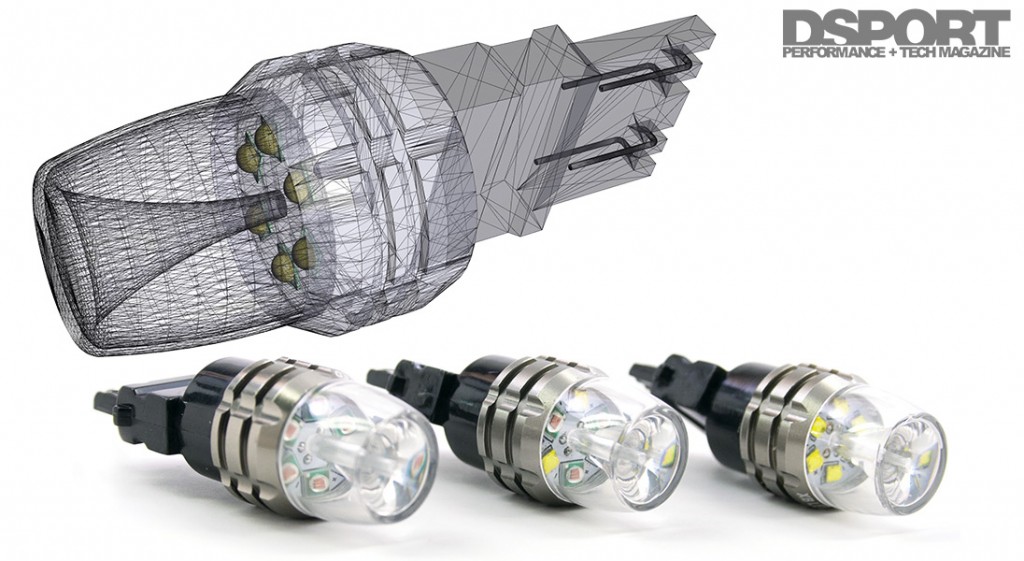 These Morimoto XB LEDs feature a proprietary lens optic to distribute bright light evenly and properly over the surface of signal’s reflector. From left to right, the bulbs are available in white, switchback and amber models.