How do you gather over thirty of the fastest time attack cars in one place? Offer thousands of dollars in cash prizes to the quickest around the track. The Speed Ring Powered by HKS brought cars and drivers from across the country to Auto Club Speedway in Fontana for their chance to prove their speed. Headlined by the Unlimited GT-R class, the Speed Ring set out to find the fastest time attack GT-R in the world. What better way to make this a real challenge than for HKS to fly its top driver, a 1,000+ horsepower GT-R and a briefcase full of cash from Japan to the states with a simple challenge: win the Unlimited GT-R class and take home $20,000. Text by Stanley Yee // Photos by Stanley Yee and Cameron Parsons 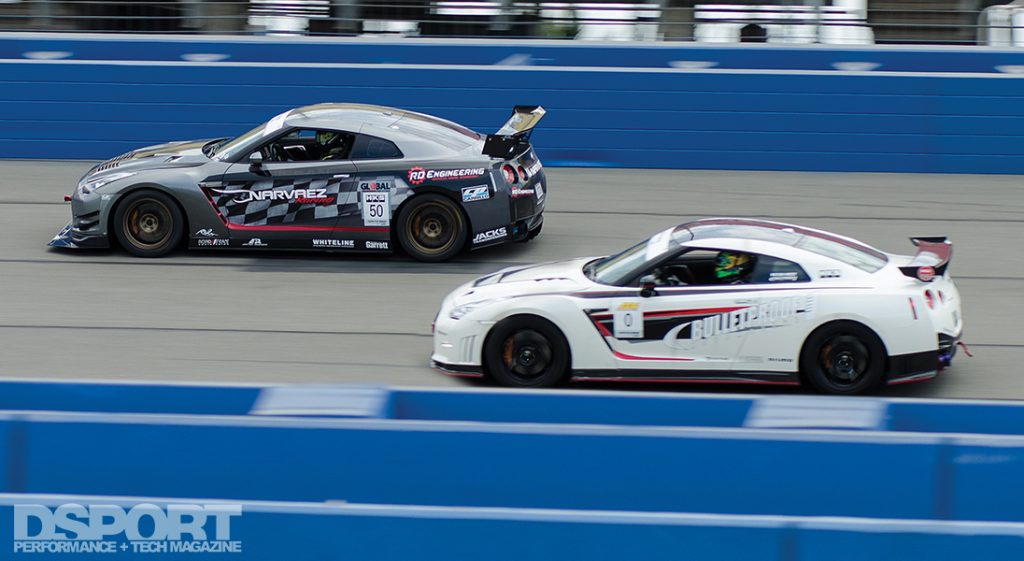 With dozens of competitors spread across 10 different time attack classes, the Speed Ring saw a mix of challengers ranging from daily driven streetcars to dedicated racecars showing up in semi haulers. The quickest car in each class would receive $1,000, giving every driver a serious incentive to push their car to the limit. The pinnacle of the event was the Unlimited R35 GT-R Class. The HKS team stated its intention to top the charts by the end of the event. The Unlimited GT-R class offered a prize purse of $20k to any team capable of beating the HKS GT-R, which caught the attention of some serious competition. 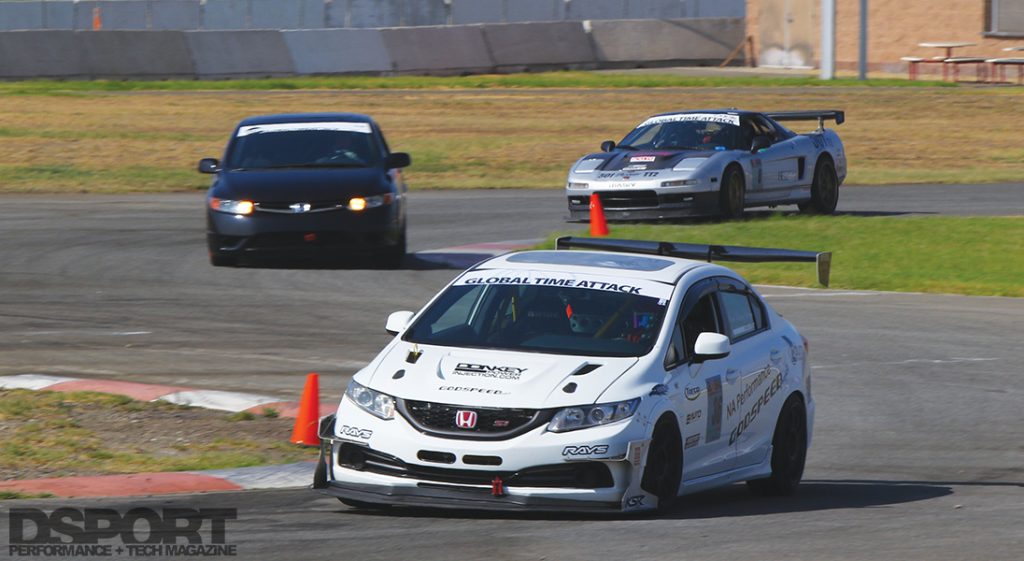 In between the bustling pit garages at Auto Club Speedway, the Speed Ring presented numerous attractions to entertain spectators. Rows of vendors showcased their latest products, while a car show further populated the space. A vantage point above the pit lane suites gave race fans an elevated view of nearly the whole race course, from the banked oval where some cars topped out at over 200 MPH, all the way through the tight infield section. Between track sessions, fans lined up for autographs and the chance to meet Nobuteru “NOB” Taniguchi, driver of the HKS GT-R. 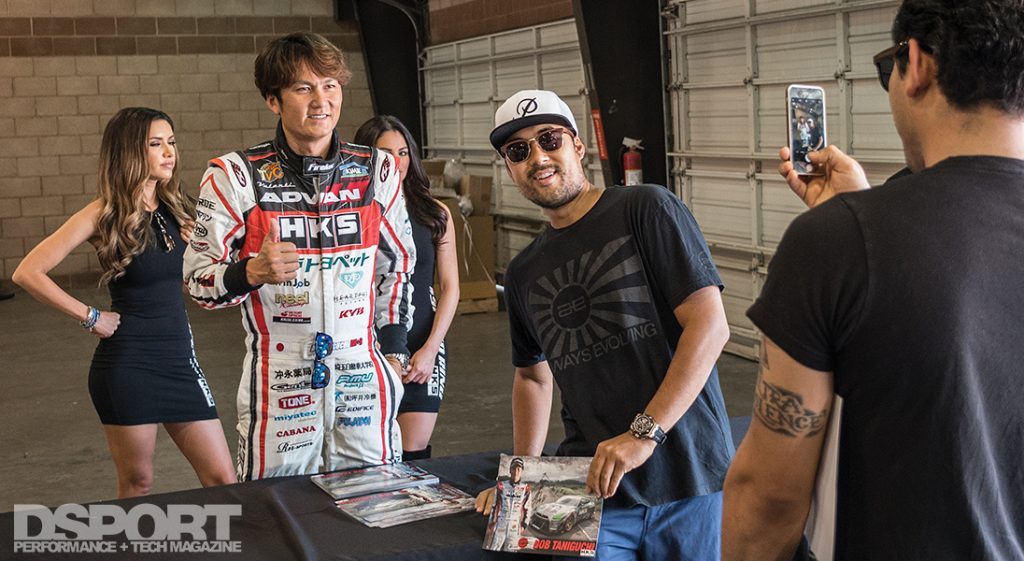 Built for the World Time Attack Challenge (WTAC), the HKS R35 GT1000+ GT-R held the center of attention for the event. With tens of thousands of dollars in prize money on the line, HKS spared no expense in prepping the GT1000+ for its time on track. With Taniguchi at the wheel, the GT-R’s goal was to lay down record-breaking lap times around the 2.8-mile track. An ongoing development platform, the HKS GT-R carried with it years of testing at some of the world’s most prestigious racetracks. With quadruple-digit horsepower and countless track development hours, the HKS GT-R was a force to be reckoned with. 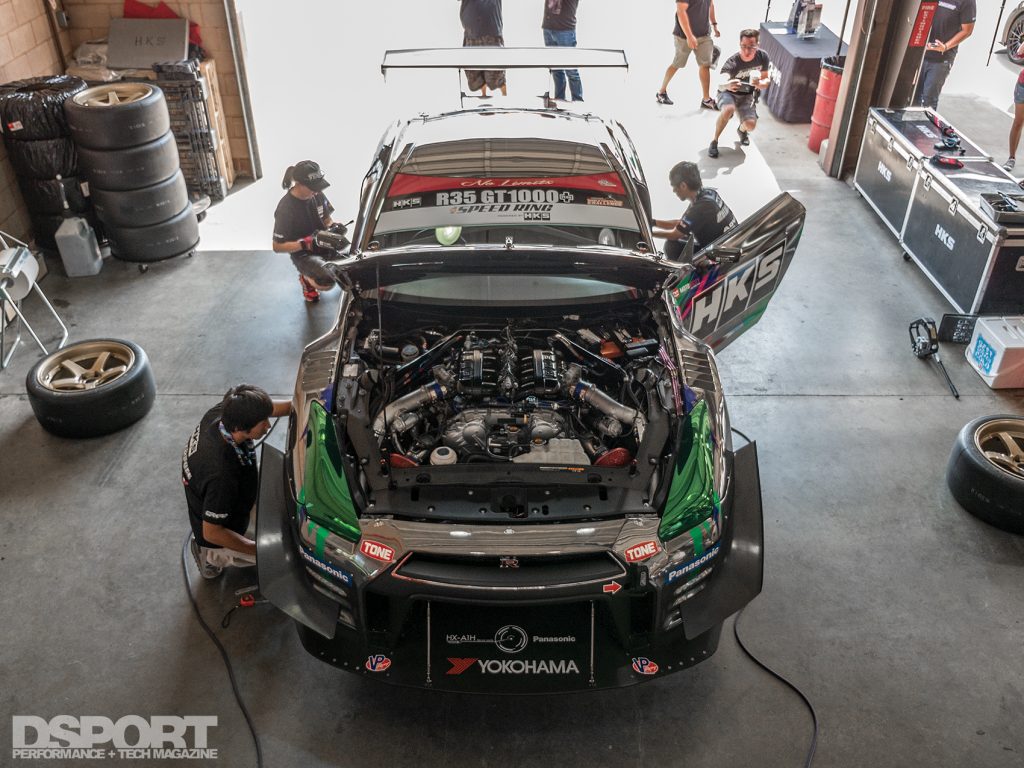 Set up just behind the HKS garage, competitor LYFE Motorsport brought its whole team to compete with Taniguchi and HKS. The Utah-based entrant brought its carbon-fiber bodied WTAC GT-R to challenge the GT1000+, along with valuable knowledge gained from competing across the world at events like the Pikes Peak Hill Climb and World Time Attack in Australia. Looking at lap times from track sessions, it was clear that the LYFE GT-R posed the biggest threat to HKS. 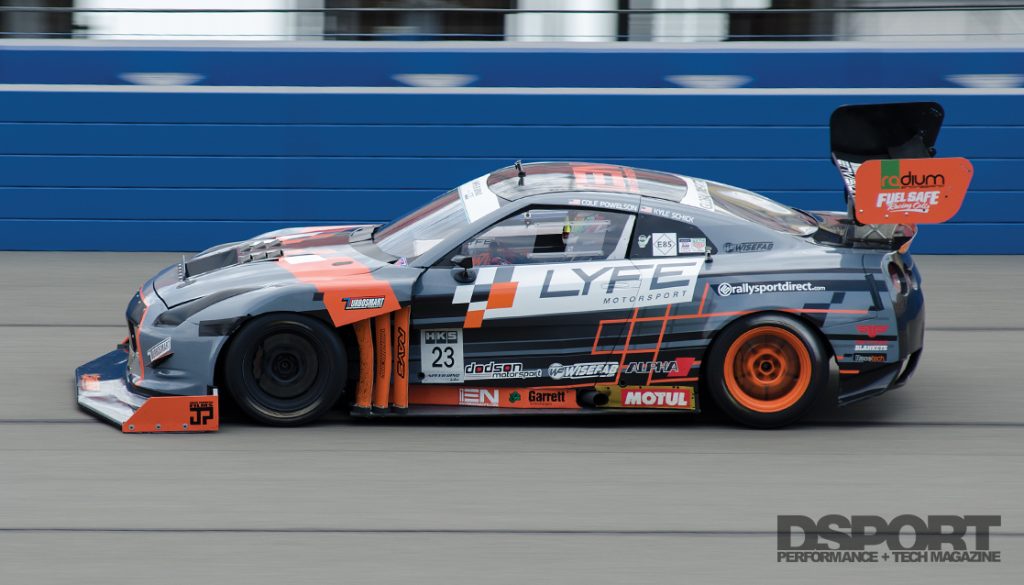 HKS and LYFE Motorsport posted competitive times in the early morning track sessions, before a stroke of bad luck struck the LYFE team. After running deep into a corner and going off track, the LYFE car (piloted by LYFE founder Cole Powelson) blew a tire and was without a replacement. Sitting behind Taniguchi’s HKS GT-R on the time sheets, it looked as though LYFE would have to throw in the towel. In the spirit of competition, Michael Essa, competing in a different class, quickly sourced a tire from his Anaheim-based shop to put the LYFE team back on track and in the competition. 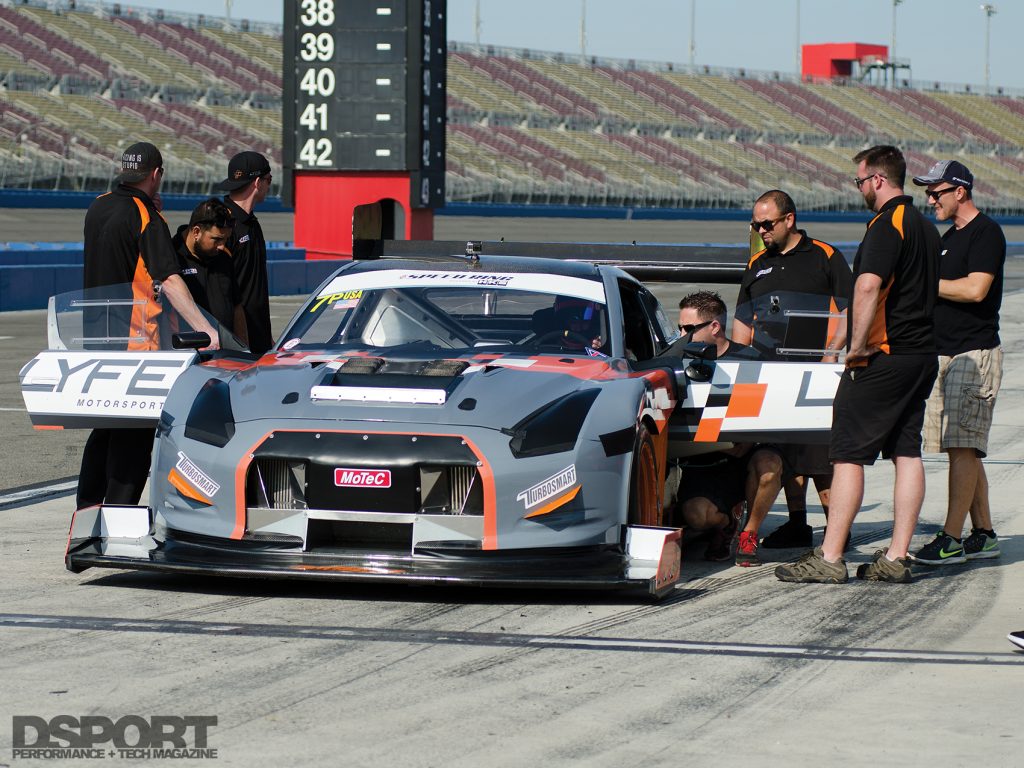 Down to the Wire

LYFE and HKS traded quick times throughout the three time attack sessions, and by early afternoon it was time to see who was the fastest. It all came down to the final 15-minute Shootout stage, where the teams dialed up the boost and gave it their all. Taniguchi set the time to beat, lapping the track with a time of 1’33.386”. LYFE Motorsport, unsure about the new tire but unwilling to give up, gave the car everything it had with just a few minutes left in the session. Knowing that he had to improve on his time, Powelson wheeled the car around the track and squeezed past Taniguchi with a time of 1’32.534”, beating the Japanese driver by just 0.852 of a second to claim the overall victory. 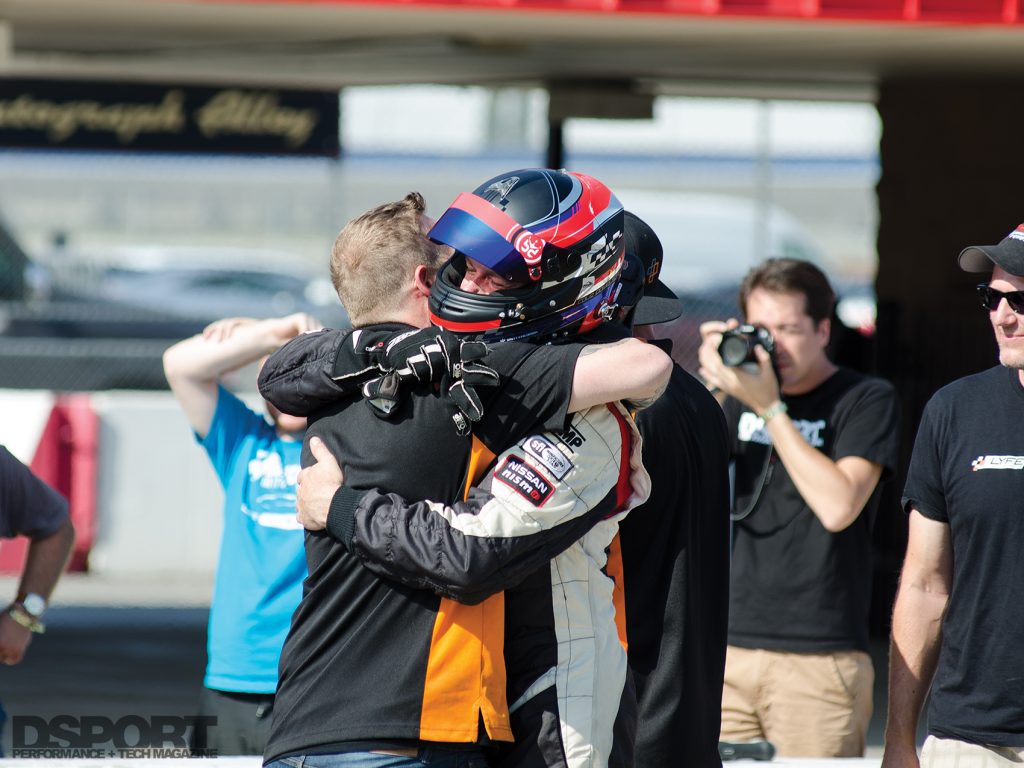 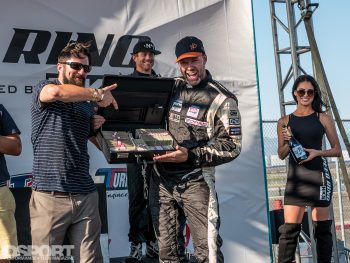 After pulling the LYFE GT-R back into pit lane and sharing a quick celebration with his team, Powelson and the LYFE crew graciously applauded HKS for their effort and closely fought competition. During the podium ceremony that followed, Powelson and other class winners were greeted by the briefcase filled with over $30k in cash prize money, which had been handcuffed to important executives throughout the day. As the ceremonies wound down and the day came to a close, competitors and spectators were already hyping up the thought of a second event next year. Time will tell, but we hope the Speed Ring returns to offer the same action and excitement, and the chance for drivers to compete with Taniguchi for the top step of the podium. 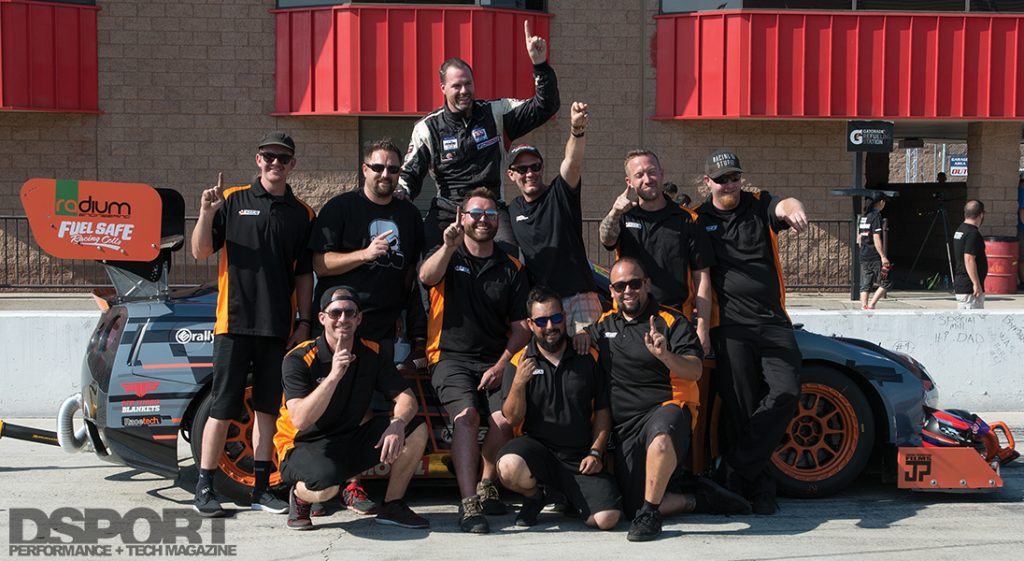