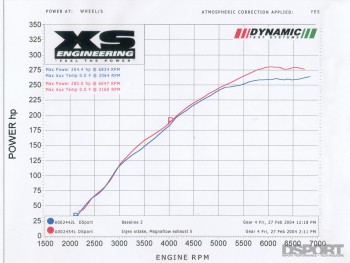 Last time we left off generating 280 horsepower at the wheels hitting a peak boost pressure of 17 psi. 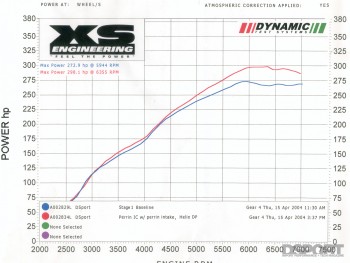 Power was increased in all points in the graph and significant gains began to appear at about 4,500rpm until redline. Gains were as high as 34 horsepower and peak horsepower jumped by over 18 horsepower. 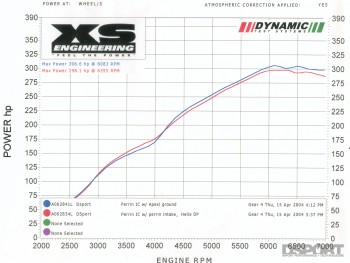 The A’PEX Integration Super Grounding System (SGS) also delivered gains from 4200 rpm until redline. Gains were as high as 13 horsepower with the peak horsepower being pushed up by 8.5 additional horsepower.

Last time we left off generating 280 horsepower at the wheels hitting a peak boost pressure of 17psi. With the PERRIN front-mount intercooler in place, a substantial amount of additional cooling was provided. When you cool the charge air more, you also experience a pressure reduction. The PERRIN intercooler was doing a good enough job to reduce our boost pressure at the manifold by roughly two psi. For this pull on the dyno, peak boost was down to 15 psi with power checking in at 273 horsepower. A fair assessment of the PERRIN front-mount intercooler’s performance potential could have been obtained at this point if we would have been able to correct the boost pressure back up to the 17psi mark we previously encountered. Doing the math, this should have put horsepower at the 291 pony mark. Unfortunately, our STi is not yet equipped with a boost controller, so we didn’t have that option. 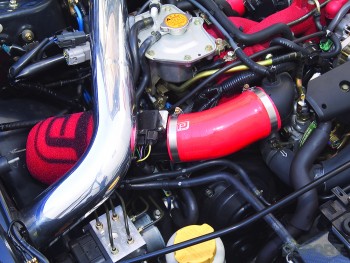 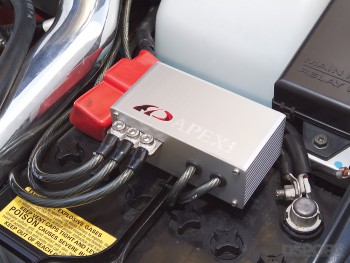 With our previous experience with performance-oriented engine grounding systems, we’ve seen the biggest gains on older vehicles and Mazdas. It was our theory that as the factory grounding systems became less efficient, the addition of a grounding system restored the lost link in the electrical system. As for Mazdas, the electric system from the factory just seemed to benefit from the addition of a grounding system in every case we’ve seen. As for the A’PEX Integration SGS, the configuration was a bit different in that a connection was made at both the positive and negative at the battery. In a matter of minutes, it was time to see if we found those two horsepower that we needed for the magic 300. On the dyno, the A’PEX Integration SGS didn’t only deliver the two horsepower we hoped, but it delivered a total peak increase of 8.5 horsepower. It was a completed unexpected but welcomed performance gain. One of these days, we’ll figure out why it worked so well. For now, we’ll just enjoy the power it delivered.