There are two questions you should ask yourself before starting any build: how much horsepower do you want, and how long do you want it to last? Although Subaru’s famous EJ-powered WRX STI models exploded into popularity out of rally racing and other motorsports, the flat-four power plant is infamous for self-destructing when squeezed for more power. Skim through the Subaru forums and you’ll find the question on so many STI owners’ minds, “how much horsepower can my EJ257 handle?” The answer is different for everyone, but the general consensus is that the 400-450whp range is when you might want to clear out the garage and get ready to pull a motor. Our previous Test and Tune with the D’Garage 2017 STI brought the car up to 349whp and 397 lb-ft of torque with fuel and exhaust upgrades, but car owner Al Rhee didn’t want to stop there. With potential remaining for more power on this daily driver, Al set out to push this STI even harder and even closer to the EJ257’s full potential with factory internals. 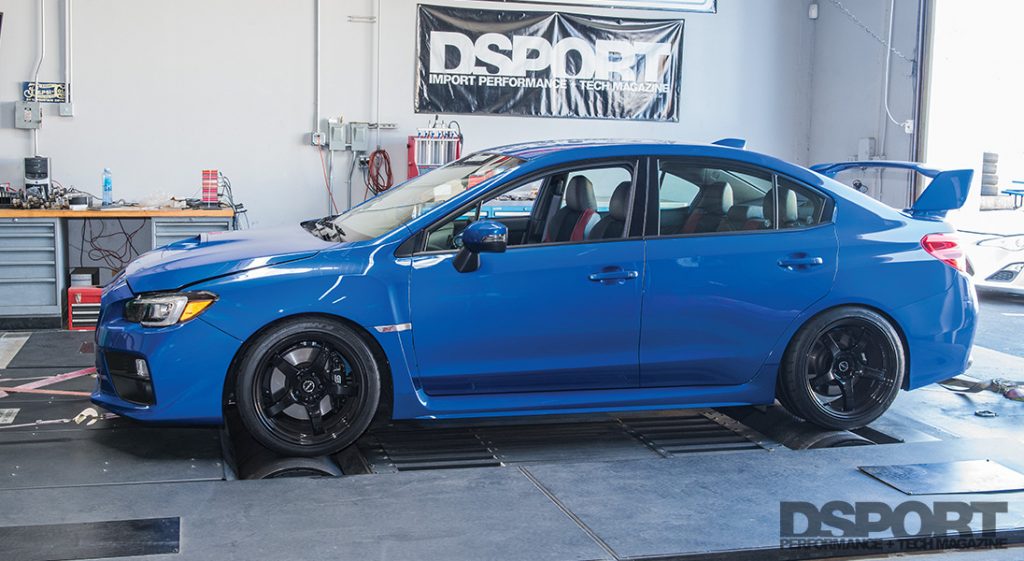 In Part 2 of this Test and Tune series, found in DSPORT Issue #182, the STI took to a balance of both power and handling upgrades to make it more track-worthy and more engaging on the street. The combination of the Cobb Tuning 3-inch downpipe, DeatschWerks 1,500cc injectors, DW300C fuel pump, and Delicious Tuning Flex Fuel Kit running E85 made 349.68whp at 5,150 RPM and 397.29 lb-ft of torque at 3,800 RPM under 21psi of boost. This proved an increase of approximately 66whp and nearly 100 lb-ft of torque. In order to take full advantage of the higher power figures, a set of 18×9.5-inch +38 offset Gram Lights 57CR wheels added an extra inch of width over the factory wheels. This allowed for four Nitto NT05 tires sized 265/35R18 to glue the car to the ground. The stickier rubber would put a greater load on the STI’s factory suspension components, so Bilstein’s B16 adjustable monotube dampers filled in to provide better track performance without sacrificing road-going comfort. This set the stage for Part 3 of this STI’s Test and Tune series.

The functions of a turbocharger cause it to produce heat, which plagues the intake side of the engine with hot, less dense air. The Subaru WRX and STI models equip an intercooler under the hood scoop to help cool the charge air from the turbocharger, and thus produce denser air for better combustion and more power. In order to improve upon the effects of an intercooler, we elected an ETS Front Mount Intercooler and ETS Intake Kit. ETS offers the kit with options for factory or aftermarket turbo configurations, core thicknesses, and other customized items to make for the best fit and finish. Since the STI will continue with the stock turbo for the time being, we chose the kit designed for the factory turbo configuration with a 3.5-inch core, stock BOV flange, wrinkle black coating, and a speed density bung. We chose to pair the ETS Intake Kit without MAF for this setup, in order to create less air restriction as we prepare for more airflow down the road with a bigger turbo. With the goal of increasing airflow further, we turned to TOMEI Powered for its Silicone Turbo Inlet Hose. This larger hose offers a larger diameter opening than the factory equipment, plus it features a smoother interior opening as opposed to the factory ribbed hose. 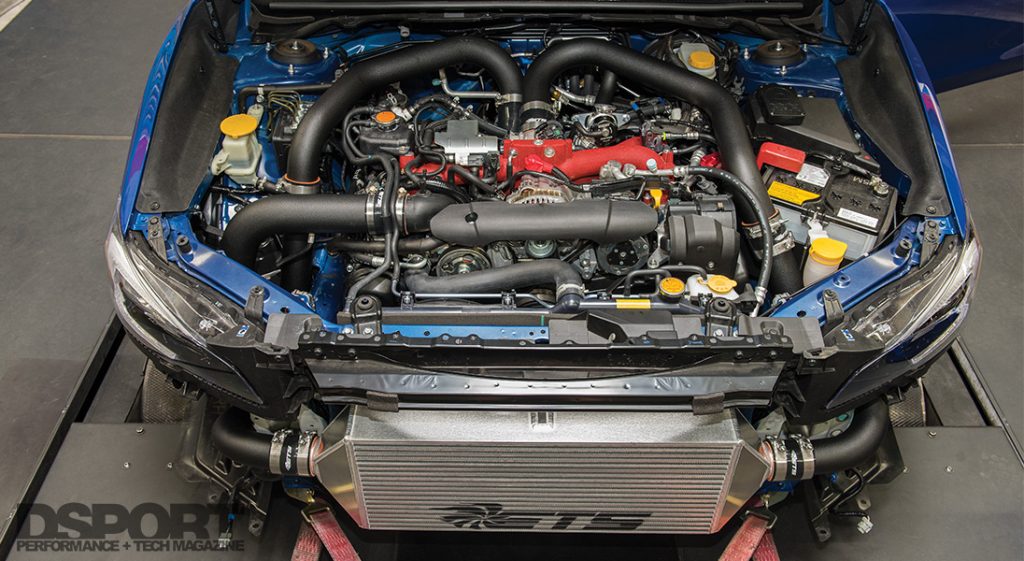 With these changes made to the intake, Visconti Tuning’s WRX/STI Speed Density Kit moves the intake air temperature sensor from the factory MAF location to the intercooler exit pipe. As a result, this plug-and-play harness allows for more accurate tuning. Continuing in line of preparing the car for bigger upgrades in the future, we also equipped the STI with Turbosmart’s Dual Port Blow Off Valve. This blow off valve is unique in that it can be configured to vent to the atmosphere, back into the air intake, or both. This flexibility will come in handy as the car goes through changes down the road and we change the configuration of the Dual Port Blow Off Valve accordingly, without having to replace it with a different one. 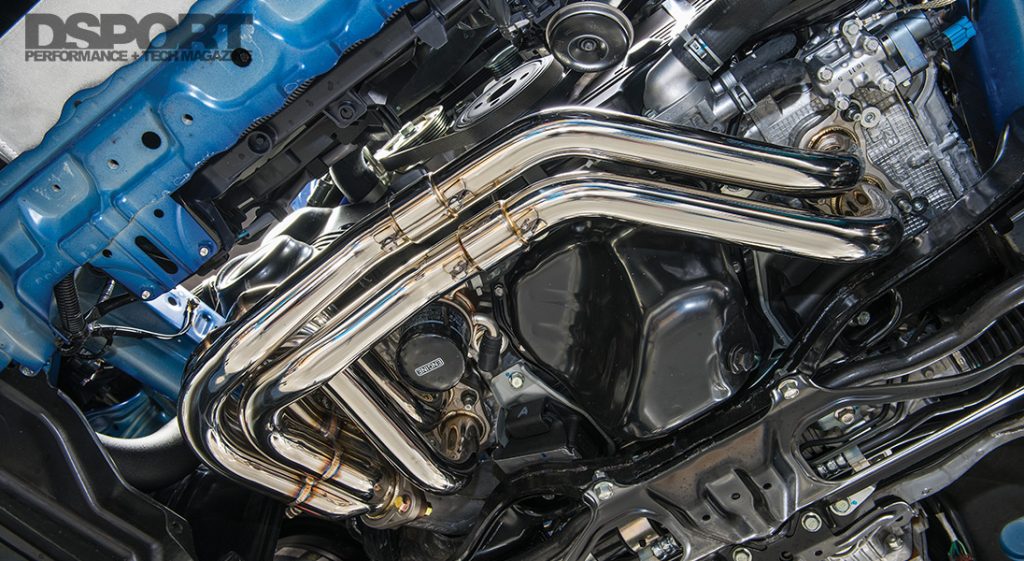 After opening up exhaust restrictions in the previous Test and Tune with the Cobb tuning 3-inch downpipe, we’d aim to open it up further at the exhaust manifold. To this end, we turned to Gruppe-S Engineering for its popular unequal-length manifold. This 4-to-1 manifold is designed to maintain the classic Subaru boxer rumble in the form of T304 stainless steel piping, made with precise mandrel bends and CNC-cut flanges. The resulting power increases from all of this hardware led to significant clutch slipping during our dyno tests. The cure for this was South Bend Clutch’s Stage 2 Endurance Clutch Kit. This clutch is unique in that the disc is made with the company’s “Dual Damped” design, implementing a full face Feramic (Sintered Iron) lining on the flywheel side and a high metal content organic lining on the pressure plate side. This design aims to ensure a positive engagement without feeling too aggressive. Given its design emphasis on rally and endurance racing, with a 565 lb-ft capacity, the clutch was well up to the task of our Test and Tune.

Our first test focused on the ETS Front Mount Intercooler with the ETS Intake Kit, benefitted by Turbosmart’s Dual Port Blow Off Valve and Visconti Tuning’s Speed Density Adapter Kit. This intake change and Speed Density Adapter Kit did away with the factory MAF and enabled air temperature readings to come from after the intercooler. This provided for more accurate tuning to wring the most out of the new hardware.

The raised torque and power numbers from Test 1 dramatically improved the car’s drivability and fun factor on the street. However, it also revealed the need for a stronger clutch. With South Bend Clutch’s Stage 2 Endurance Clutch Kit installed, the STI took to a Gruppe-S Unequal Length Header and TOMEI Powered Turbo Inlet Hose for less restrictive airflow and thus more power. On the dyno, these upgrades proved a slight increase of just 3.54whp, but more notable gains on the torque side at 17.62 lb-ft. It’s also interesting to note that the horsepower and torque increases occurred only between 3,300 RPM and 5,100 RPM. Outside of this range, we actually witnessed a small reduction in power and torque. According to Delicious Tuning’s Bill Knose, who was tuning the car, the data logs made it apparent that the Gruppe-S exhaust header piping is slightly larger in diameter than the factory header. This design actually slows the exhaust gases and thus causes a reduced low-end turbo spool. Since the exhaust gases are able to flow easier out of the exhaust ports with the new header, the factory turbo also struggles to keep up at the top-end. As a result, the car now favors a lower shift point than before but still with a broad enough power band to handle the track without losing the convenience of easy driving on the street. 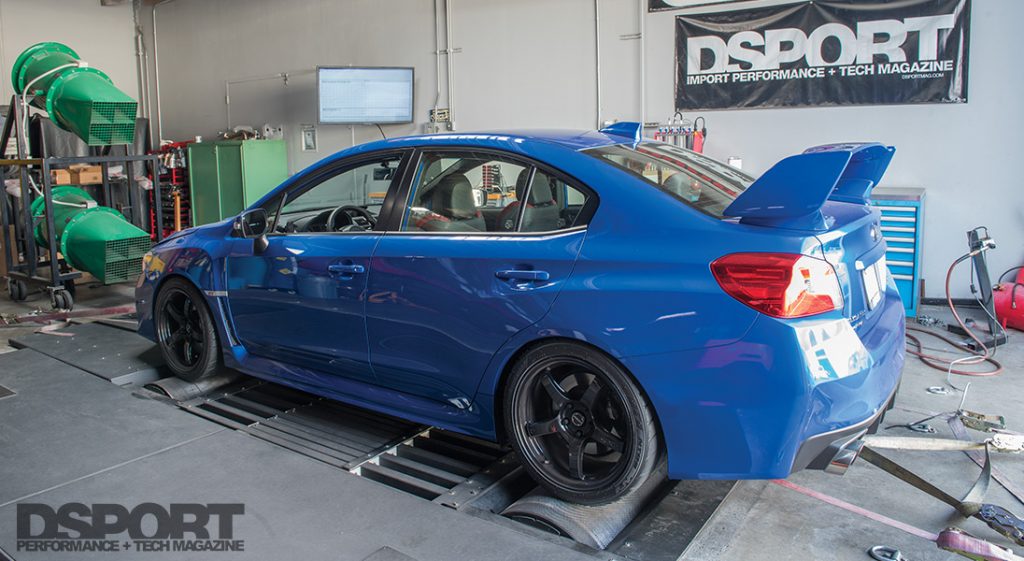 The tested components paid off in the form of an additional 19.98whp and 33.36 lb-ft of torque, raising the final peak figures to 369.66whp and 430.65 lb-ft of torque. This showed a horsepower improvement of 5.71 percent and a torque gain of 8.4 percent. Although we found some notable power increases with the new parts, the factory turbocharger has become the new weakest link. Next time, an uprated turbocharger will take full advantage of the higher-flowing intake and exhaust components, feeding the EJ257 with the air that it’s begging for. In the meantime, Al feels that the STI’s new power numbers will suffice for a while, as going much higher will place worrying thoughts of a grenaded engine in the back of his mind. The rest of us at the DSPORT office, however, want to find the true limits of the latest production EJ257 engines in the VA generation STI. We’ll keep prodding Al to take his car to the next level, and we encourage you to write to us at inbox@hardmediainc.com and do the same.