The last time I raced on Mazda Raceway Laguna Seca was also the first time I ever crashed there. In October 2015, Mazda loaned us a Touring Car B-Spec (TCB) Mazda2 to take to the Pirelli World Challenge season finale for the full pro racing experience. I’ve raced cars far faster and I must have had more than 500 laps around Mazda Raceway by then, yet I still found myself overwhelmed by the scale of the series and the close competition. If you check www.dsportmag.com or Issue #161, you’ll find the story of how I jumped into the driver’s seat cold, trimmed down my lap times, and fought my way into the top ten, only to lose control of the car at 75 MPH and hit a tire barrier head-on. The people at Mazda are either crazy or just irrationally supportive, as they’ve offered a chance for redemption. Now, two years later, they provided us at DSPORT the latest generation Global MX-5 Cup race car to test, race, and have a second go at the Pirelli World Challenge season finale again at Mazda Raceway Laguna Seca. Before we begin testing the Global MX-5 Cup car, we’ll first explore the ins and outs of what makes this car different from the street models, and why road racers are making such a big deal about it. 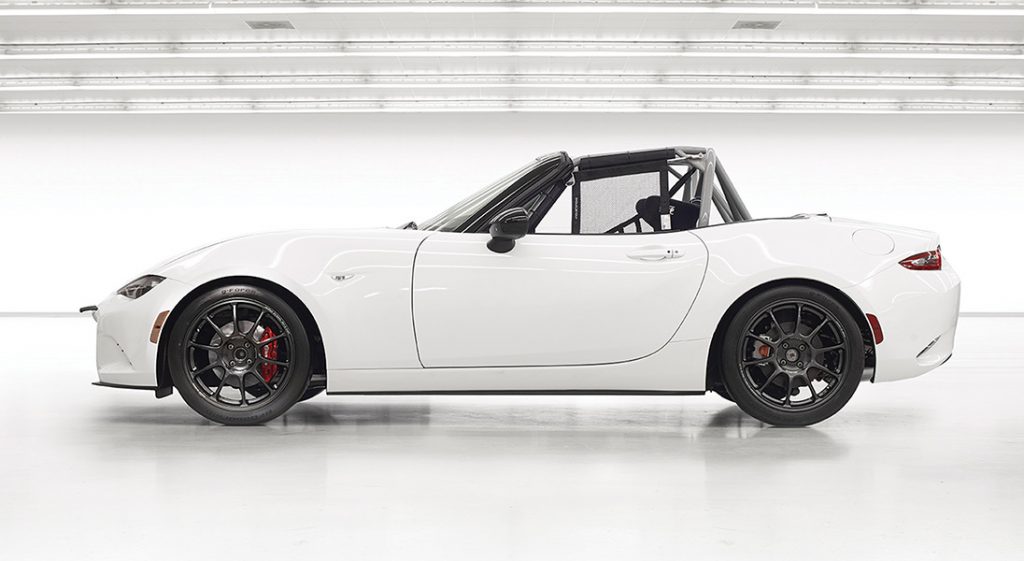 Building a race car isn’t easy. Unless you’re well versed in interpreting rules, building roll cages, fabricating custom components, and are skilled in a multitude of other specialized jobs, you’re not handling the entire build yourself. Beyond the tasks of stripping a car and putting it back together, you must also plan out what class the car will race in. I can tell you firsthand that the process of getting your car approved, or homologated, to become legal for a race class is exhausting. Plus, when you go against other home builds, who knows where the competition outspent or out-cheated you. While the latter might be part of the fun in drag racing, many road racers want to skip the headaches of the build process. This frees them up to focus more on close wheel-to-wheel racing where a smart setup, skilled driving, and effective strategy determine the winner. 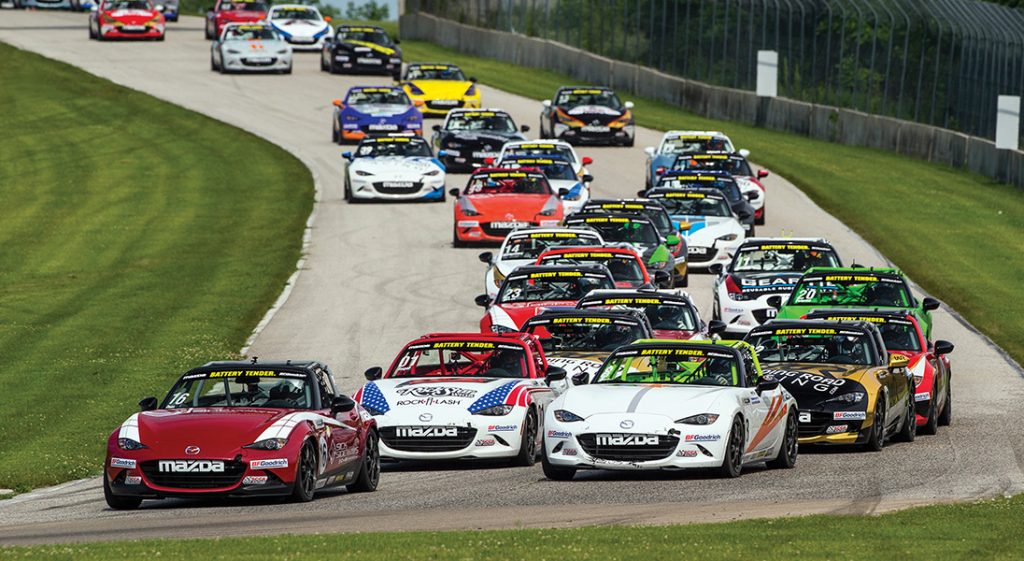 In order to keep the competition close and prevent drivers from spending their way to the top, every component of the cars is spec and even the engines are sealed. This means that when cars go side by side into a corner, both drivers play a game of chicken of who’s willing to brake later with the exact same equipment stopping them. Since the cars are evenly matched, the top 20 fastest entries at a Global MX-5 Cup race regularly turn lap times within just two seconds of each other. This goes to show that Mazda’s spec, turn-key race car design offers some of the lowest cost pro racing you can find, along with some of the closest competition races in the world.

From Street to Track

Every MX-5 Cup car in the United States is prepared by Statesville, North Carolina shop Long Road Racing. The shop takes in white, Club trim street MX-5s from Mazda to perform the build. This way, every race car is truly built from an actual street car with VIN and all. This includes removal of the factory wheels, seats, soft top, sound deadening materials, and every other little piece until only a bare tub remains. Once the car is fully stripped down, the Long Road Racing engineers rebuild the car with a blend of factory and aftermarket components for racing. 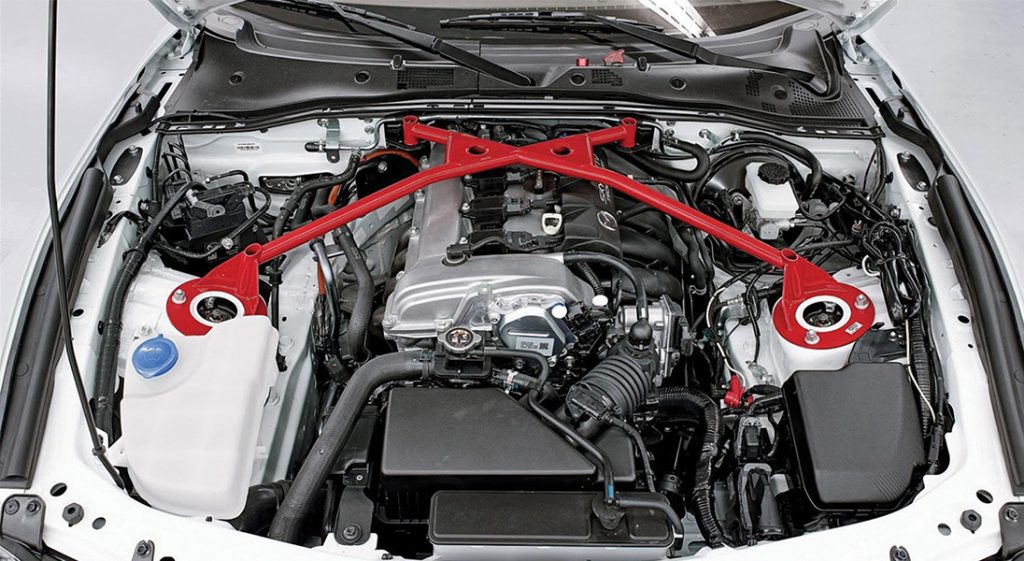 Under the hood of the Global MX-5 Cup race car, you’ll find the same 2.0-liter SKYACTIV-G power plant as the street models. The engine internals remain stock, so that the exact same engine that racers push for hours on end is the same as what street MX-5 customers use in their cars. The street model’s factory intake feeds air into the cylinders, which then spit exhaust out through a Kooks Racing Headers exhaust system. The exhaust system utilizes a long tube header design, a straight mid pipe, and a muffler at the back. In place of the factory ECU, a GEMS (General Engine Management Systems) ECU controls the engine parameters with a spec tune for the racing series. In an effort to better balance the car and save on weight, the battery location was moved from the engine bay to the trunk, now employing a Battery Tender Lithium Ion battery.

Given that the car is designed to race in any weather condition and for both sprint and endurance events, effective cooling is a must. At the front end, an oversized C&R Racing aluminum radiator replaces the old plastic end tank unit. On the underside of the car at the rear, you’ll find Setrab engine oil, transmission and differential oil coolers with switchable electric fans. With proper cooling solutions in place on a near-stock powertrain, the MX-5 Cup readily endures through extended lapping sessions without error (the car we received from Mazda already successfully completed the famous 25 Hours of Thunderhill race).

Like the engine, the six-speed H-pattern gearbox is also sealed to level the playing field. However, the gearbox recently took to a few updates to ensure better longevity before demanding a rebuild. Rather than the completely stock hardware that the cars debuted with in 2016, the MX-5 Cup now utilizes a motorsports-specific transmission. Mazda has stated that the new gearbox still utilizes mostly factory components, only with the exception of a few beefed up internal parts to better handle a racing environment. Aft of the transmission, power is sent through the Club trim MX-5’s sealed limited-slip differential with pump and thermal controller. While racers aren’t given the ability to dig into the engine, transmission, and differential internals, they do have full reign to tune the MX-5 Cup’s handling components.

The ND MX-5 street cars come equipped with a lightweight platform, multilink suspension, and a near unbeatable handling capability. The MX-5 Cup enhanced the car’s strengths in these areas further, starting with Dynamic DSSV (Dynamic Suspensions Spool Valve) two-way adjustable dampers wrapped in 500psi springs in the front and 300psi springs in the rear. The Dynamic DSSV design does away with the commonly used shims on the piston inside the cylinder, and replaces them with spring-loaded spool valves to control oil flow. This configuration offers much more precise oil flow characteristics and more accurate tuning.

The Global MX-5 Cup utilizes the Club trim’s stock Brembo four-piston front brake calipers, which offers plenty of capability seeing that the MX-5 Cup weighs in at about 2,400 pounds with a driver. A set of Pagid racing brake pads fill in the calipers and clamp down on grooved rotors. Again with endurance in mind, Long Road Racing engineered brake cooling ducts that route from the bumper fog light locations to the front brake calipers. 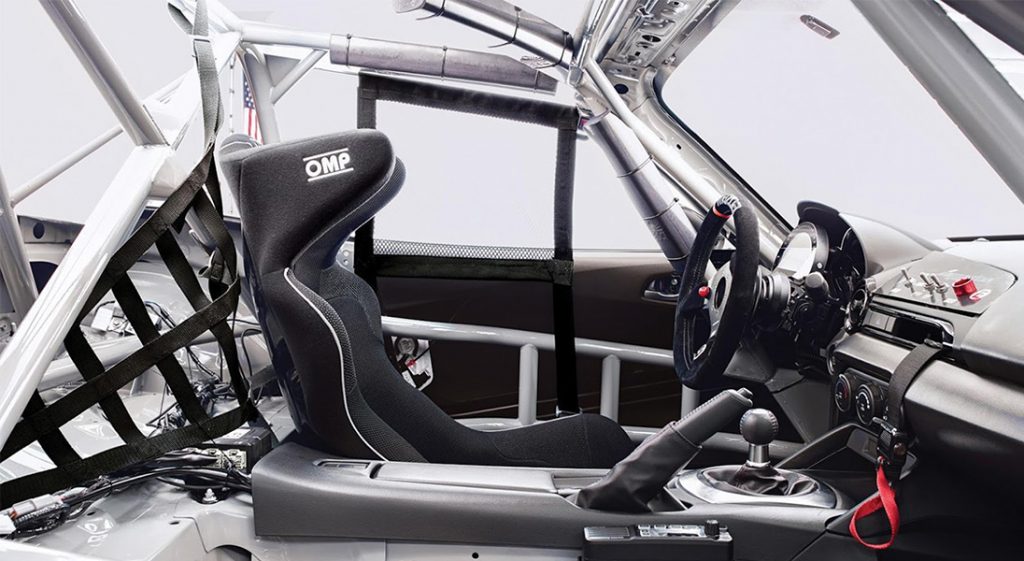 The Global MX-5 Cup car is used in some of today’s most competitive racing series, which stresses a high priority on safety. Long Road Racing designed and assembled the laser-cut, symmetric roll cage to be universal to both left-hand and right-hand-drive cars. Although the cage height makes the cockpit look like a tight fit, the rollover protection allows for drivers up to six feet and four inches in height. As for protection from side impacts, the insides of the doors are cut out to make room for NASCAR-style, thick door bars.

Owners are free to install whatever race-legal seat they wish. Our car houses an OMP HTE-R racing seat with a six-point harness and both left and right window nets. An NRG quick-release hub and steering wheel sit at the driver’s hands, with an AiM MXL2 dash logger sitting front and center to display lap times and engine vitals. In order to meet safety regulations, the car is equipped with interior and exterior-accessible power cutoff switches and buttons to activate the FIA-approved fire suppression system. 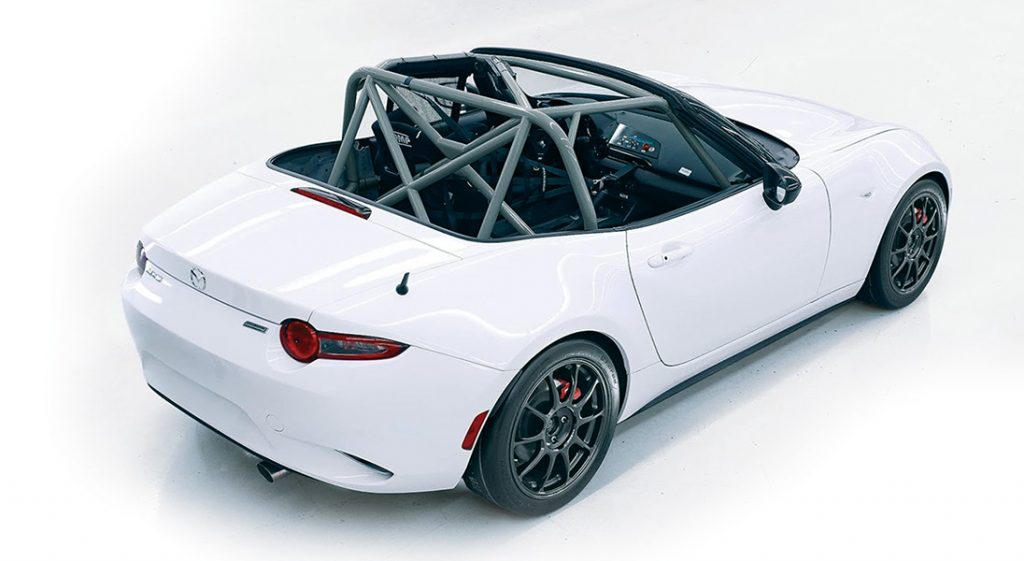 The MX-5 Cup race car comes equipped with nearly all the required safety items including the roll cage, so that it is legal to race nearly anywhere you take it.

Like the previous generation MX-5 Cup race cars, the current ND model competes with an open top. Although this is acceptable for some racing series, others require cars to run with an enclosed cockpit. In the interest of making the Global MX-5 Cup as widely rules-compliant as possible, Mazda made the racing hardtop available as of April 2017. Unlike the majority of aftermarket hardtops currently available, Mazda’s offering fits around the roll cage. Mazda has stated, though, that this hardtop is only available for MX-5 Cup owners and is not intended for street cars. If you must have a street model ND MX-5 with a hardtop, your options are to either pick up the RF model or look into aftermarket offerings like DG Motorsports’ carbon fiber top.

When the ND platform Global MX-5 Cup’s price of $53,000 (now $58,000) was first announced, the number was met with a very divided audience. Half considered this price a steal for a pre-built race car, while half couldn’t believe that a Miata could cost so much. The near-$60,000 price tag feels a little more justified when you take into consideration the time and labor involved with completely stripping down a car, caging it, and rebuilding it from the ground up. Add in components like the racing-grade dampers, data system, safety equipment, custom exhaust, and more, and the price quickly starts to make sense. 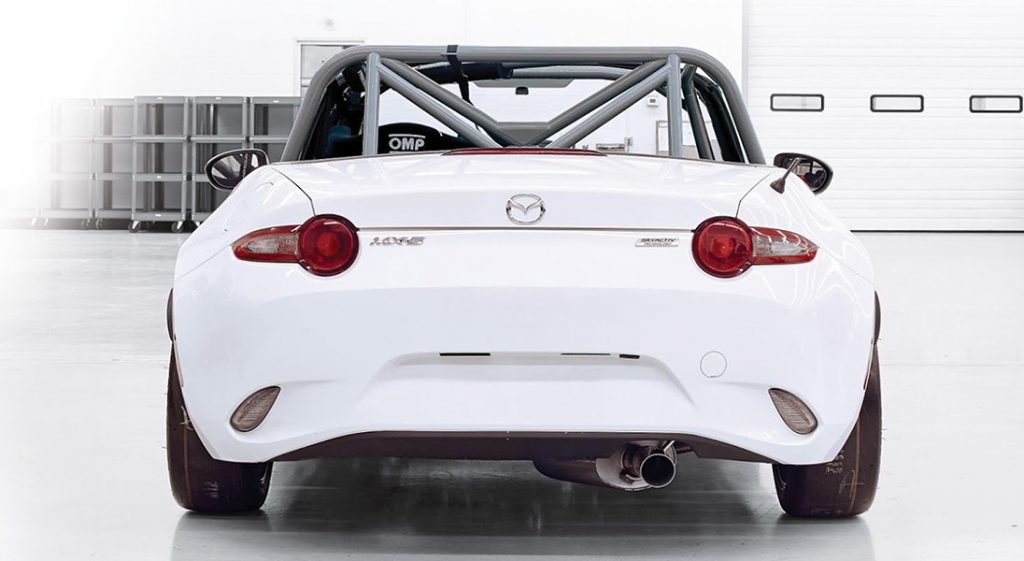 The most important point to factor in is that this car can be shipped race-ready and legal to compete in the Global MX-5 Cup series, SCCA and NASA club events, and the Pirelli World Challenge series (with the hardtop). Very few platforms are eligible for competition in so many different facets of racing without the need for modification. So is the price tag worth it? For the audience that wants a track toy that kicks them into their seats at every touch of the throttle, it should be obvious that a 155 horsepower Miata isn’t for them. For those that want to go racing with a ton of options for series and venues, especially with low ongoing running costs, the MX-5 Cup is absolutely a deal. 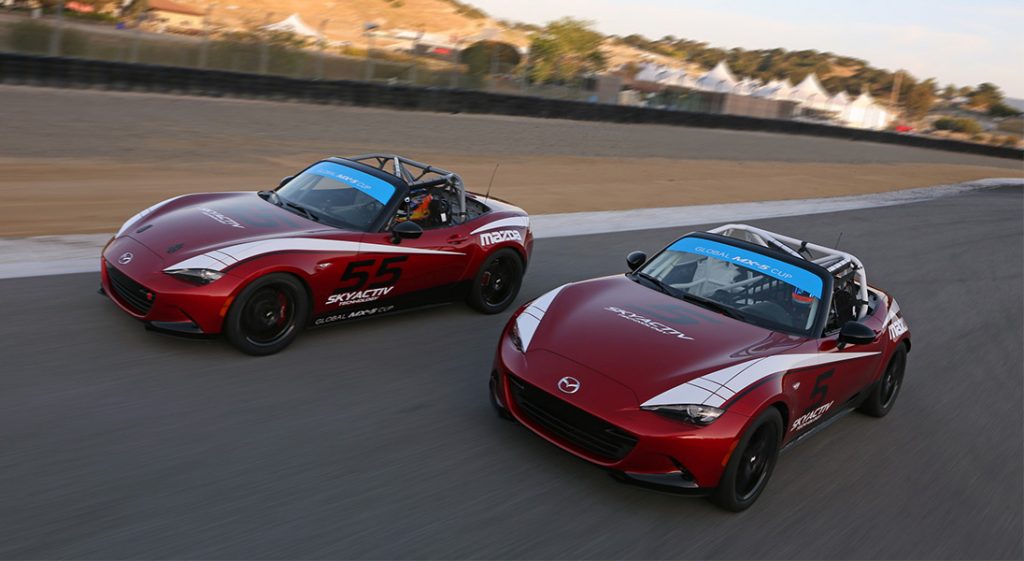 Back in Issue #160, I had the chance to drive the NA and NB model Spec Miatas and NC and ND MX-5 Cup race cars back to back. Now that Mazda has loaned us the ND model Global MX-5 Cup race car for the next few months, we’ll get to really test the car’s capabilities, how it measures up on the track, and what it’s like to battle wheel to wheel with others. I have unfinished business at Mazda Raceway Laguna Seca with the Pirelli World Challenge series. Last time, I raced with some of the best B-Spec drivers in the country. Now, I’ll be bumped up a class to the Touring Car A (TCA) category, put up against cars like the Honda Civic Si, Scion FR-S, and a wealth of other MX-5 Cup race cars. Before jumping straight to the top again, we’ll spend the oncoming months testing the car and tuning its setup, and getting practice laps in at test days and local club races. We’ll be more prepared than we were last time, but the competition will be greater than before.