The import performance movement has always featured an ever-changing marketplace. During the ‘80s, the predominant weapons of choice were Mazdas, Datsuns or Toyotas. These lightweight RWD platforms made for perfect pocket rockets. In the ‘90s, the FWD import movement was spurred by turbocharged Honda Civics and Acura Integras tearing up the dragstrip. As the century turned, RWD and AWD vehicles from Nissan, Subaru and Mitsubishi took over the import scene. Now as we near the end of the decade, Mazda is making its charge to be at the front of the pack. Today, the MAZDASPEED3 stands alone as a factory-offered turbocharged FWD platform. Arguably, it represents the most turn-key fun you can have in a FWD today.

The MAZDASPEED3 features the same MZR 2.3-liter turbocharged engine used in the MAZDASPEED6. However, the engine is retuned to produce 263 horsepower and 280 lb-ft of torque at the flywheel. The MZR engine features a relatively-high compression ratio (9.5-to-1) for a turbocharged engine. It also features direct-injection technology. The internal cooling effects of direct injection help reduce engine knocking tendencies often associated with turbocharged powerplants. Unfortunately the drawback of direct-injection technology is the absence of aftermarket resources to upgrade these fuel systems when significant power gains are intended. 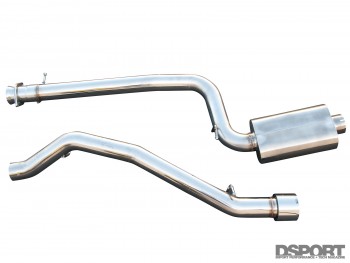 Maximizing the performance out of any gasoline engine is simple. Improve the airflow through the engine, add the proper amount of additional fuel and more power is realized. To achieve this end, we started with improving the exhaust. A CP-E 3-inch stainless-steel catalytic-back exhaust system was selected to reduce exhaust backpressure and allow an increase in performance. By reducing turbo backpressure, turbo boost response is improved. CP-E’s two-piece exhaust system has been designed to install using simple hand tools. The straight-through exhaust system helps improves exhaust flow from the catalytic to the tailpipe. 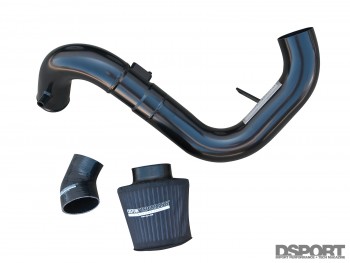 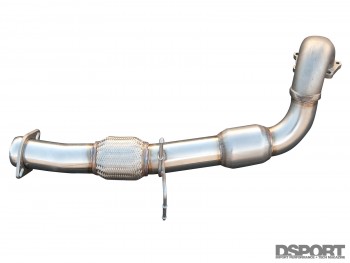 To let the cat out of the bag, we looked for a downpipe that would eliminate the power-robbing factory cats. The CP-E performance downpipe replaces the restrictive factory downpipe and its two catalytic converters with a high-flow 3-inch mandrel-bent stainless-steel downpipe. Installed in-line of the downpipe is a high-flow metallic honeycomb-design converter that helps reduce harmful emissions without severely restricting exhaust flow. The downpipe is a bolt-on replacement for the factory downpipe. While it contains a cat, the CP-E downpipe is likely to not be “street legal” in many states. Check your local laws.
Pages: 1 2 3
On July 14, 2015