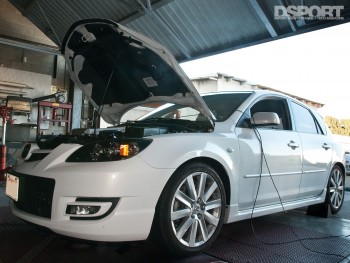 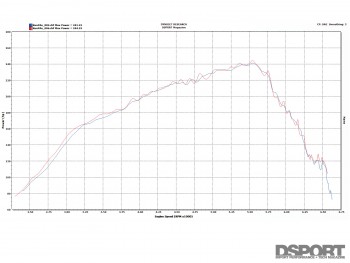 The CP-E 3-inch exhaust system reduced exhaust back pressure, allowing the turbo to reach full boost much quicker. On the dyno, gains as high as six horsepower can be seen on the graph. We were surprised to not see more horsepower from the larger diameter system. However, according to CP-E, the power gains we saw on our MAZDASPEED3 were right in line of their testing.

Installing the intake required removing the driver side front wheel and fenderliner to gain access behind the bumper. This is where the new air filter resides. The factory airbox is held in place by a couple of 10mm bolts and must be removed to install the CP-E intake system. When installing the CP-E intake pipe, be sure to take notice of the shifter mechanism’s relation- ship to the intake pipe. Make sure that the shifter is able to go through all the gears without hitting the pipe before tightening down all the nuts and bolts. On the dyno the MAZDASPEED3 roared to life for 253.97 horsepower and 290.15 lb-ft of torque. Peak horsepower increased by 9.8 ponies while increases as high as 20 horsepower were seen at 4,250 RPM. 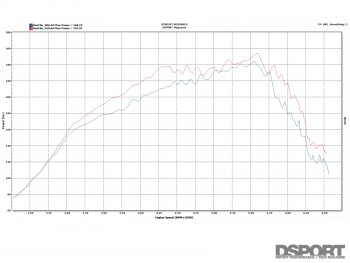 Intake air restriction on a turbocharged powerplant can dramatically affect overall performance. By improving airflow into the turbocharger, boost response and power increase can be realized. The CP-E intake dramatically improved power output of the Mazda throughout the powerband. The largest power gain was witnessed at 6,000 RPM with a gain of 20 horsepower over the stock intake box. Peak horsepower increased by 9.8.

Installing the CP-E downpipe is no easy task. Removing the factory downpipe requires removal of the intercooler, several heat shields, two oxygen sensors, a number of mounting brackets and several nuts and bolts that are tucked in next to the firewall. Even after letting the engine cool for 10 minutes and having a huge dyno fan blow on the downpipe, we still ended up searing some skin off our arms. Once the factory downpipe was off, it took us half the time to install the CP-E downpipe. Fortunately, the hard work paid off. With the CP-E downpipe in place, the Mazda rocked the rollers to the tune of 273.32 horsepower and 294.11 lb-ft of torque. Peak horsepower increased by 19.75 while a 36 horsepower gain was seen at 5,100 RPM. 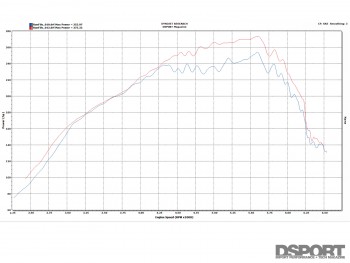 To further increase the exhaust flow, a CP-E 3-inch downpipe was used. Installation is somewhat difficult due to the tight work space. The hard work does pay off big though. The expedited exhaust flow resulted in a gain of 19.35 peak horsepower over the stock downpipe. The largest power increase came at 5,100 RPM with a gain of 36 horsepower to the wheels.