Accelerating a 3,800 lbs. vehicle down a 1,320-foot drag strip in less than eight seconds is no easy feat. Doing so with off-the-shelf parts might seem even more daunting. Using a reflashed factory ECU and an essentially stock suspension? Mind-blowing. But this is what Extreme Turbo Systems (ETS) accomplished in early 2014 with its R35 GT-R (DSPORT Issue #143, July 2014).
Photos by Dianne Boyce (DB Photos) and Jesse Childress 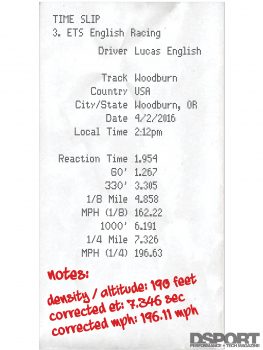 The ETS GT-R rose to prominence quickly, jockeying for the world record in the quarter mile and top speed in the half-mile. Most recently, it held the quarter mile World Record in March 2015. Since then, a number of contenders have raised the bar. Nonetheless, with tuner and driver, Lucas English, at the wheel, the ETS GT-R achieved a new best time of 7.326 seconds at 196.63 MPH on April 2, 2016. This performance captured the U.S. GT-R quarter mile record, and as of April 22, ranking third in the world for the quarter mile. 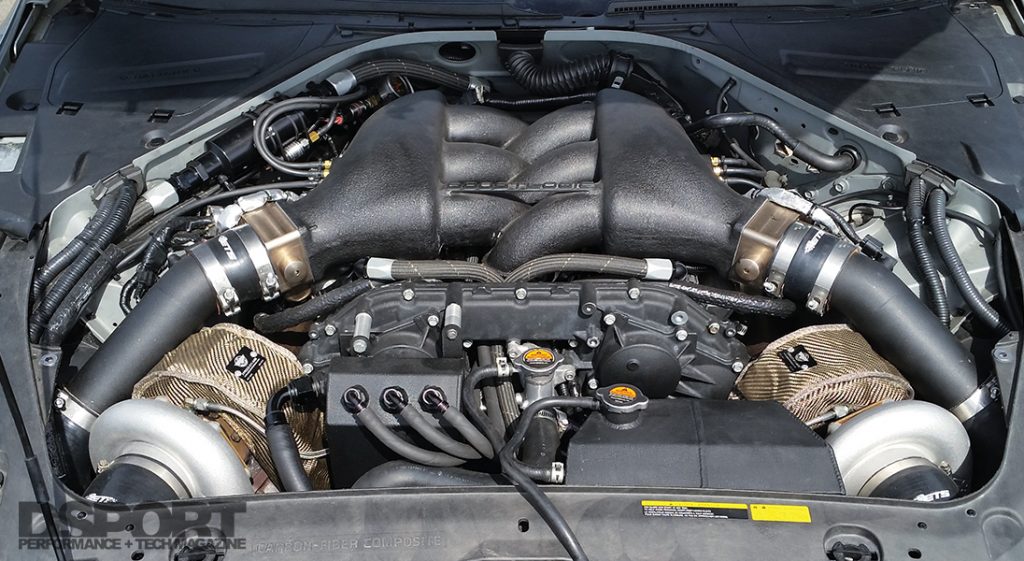 Updates to Stay in the Battle

In order to go from 1,800 horsepower (April 2014) to an estimated 2,350 horsepower in 2016, ETS made several significant upgrades to its GT-R. The most noteworthy change under the hood started with a new Willall WR35BB billet aluminum V6 block. This new mill is a VR38 clone that shares the same displacement but features ETS ductile iron sleeves and a complete ETS-spec rotating assembly. A billet aluminum cradle further strengthens the block, which the manufacturer claims will lend to the WR35BB’s Ultimate Tensile Strength (UTS), a measurement of the maximum stress that the block can withstand before breaking. Compared to the stock VR38DETT engine’s UTS of 210Mpa, the 6061-T billet WR35BB block is said to offer a higher UTS measuring in excess of 350Mpa. Another important engine upgrade involves the lubrication system. To keep the rotating assembly lubricated under the extreme forces of a drag launch, a Magnus Motorsports dry sump oiling system replaced the factory wet sump system. 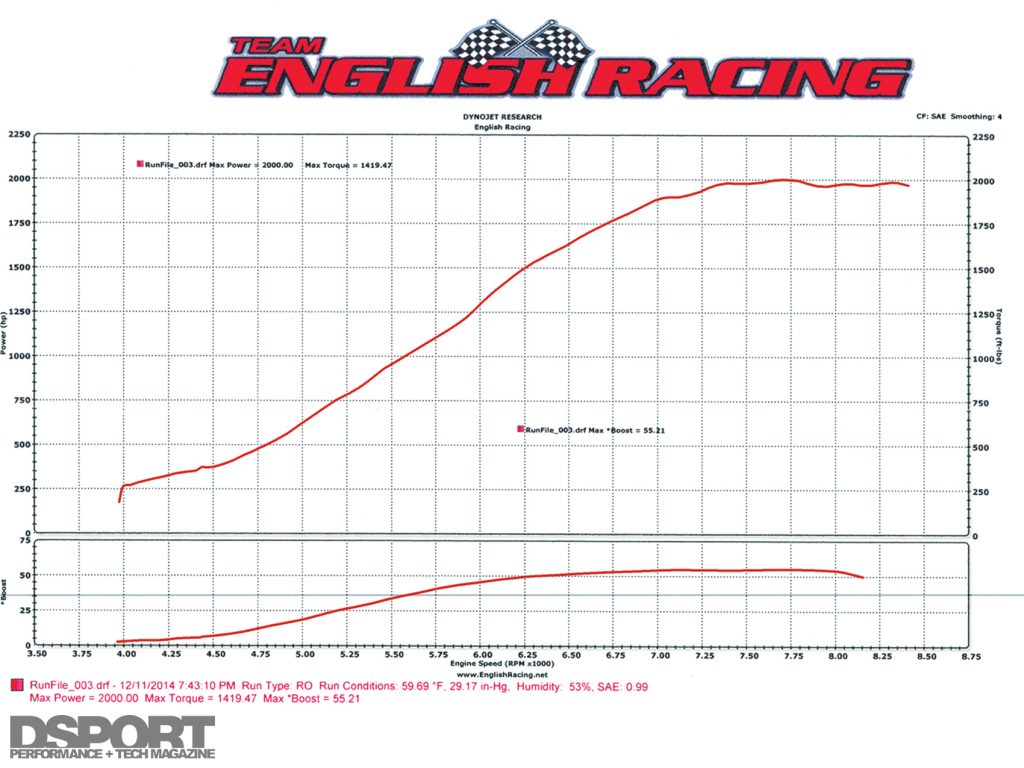 To pressurize the cylinders of the Willall block, ETS titanium top-mount race manifolds position a pair of Precision Turbo & Engine PT7675 Gen2 turbochargers behind each headlight. The turbochargers send compressed air through an ETS Super Race front-mount intercooler before it is distributed to the combustion chambers by way of Boost Logic intake manifolds. A higher flowing ETS mechanical fuel pump draws fuel from an ETS surge tank and a modified factory fuel tank to ensure that the injectors have plenty of E98 to spray into the cylinders. To regulate critical engine functions, a Syvecs engine management system replaced the reflashed factory ECU. Wayne Potts at ISC Tuning helped to familiarize English with the Syvecs’ software and capabilities. 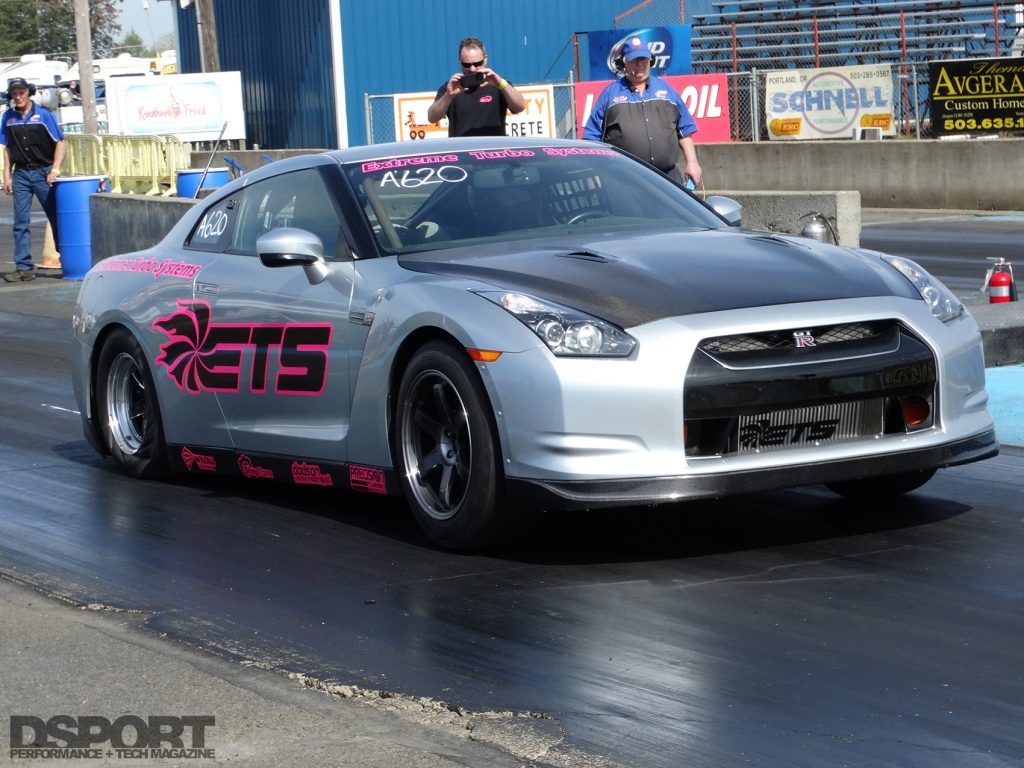 Squat at the Line 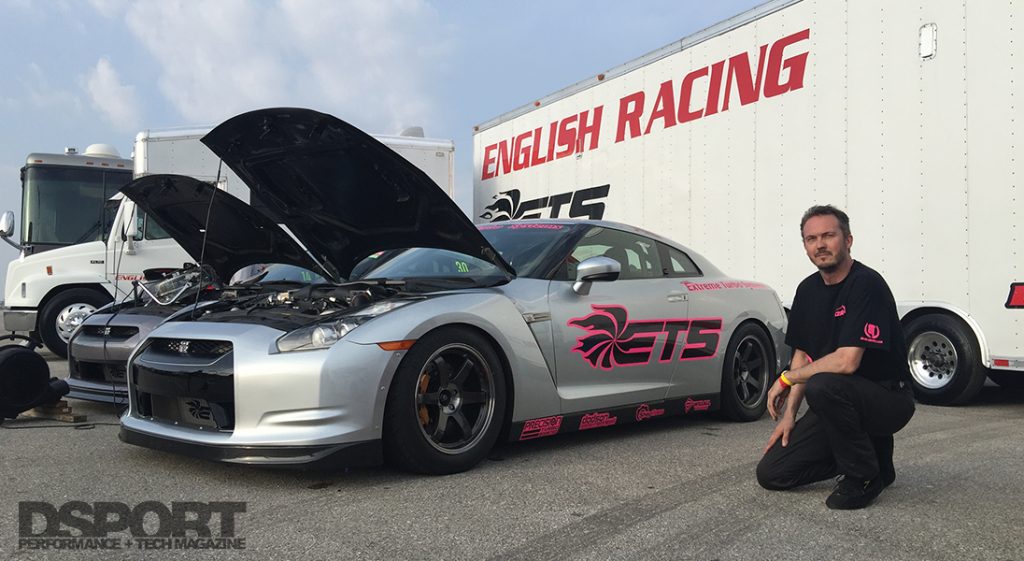 Inside a Racer’s Mind

So, what does a record setting pass feel like? English shared some thoughts about his most recent trip down the drag strip, “I’m generally a pretty calm driver and notice what’s going on around me. When I made the USA record setting pass, I got tunnel vision. It feels pretty crazy at the next level, when all I can think about is keeping the car pointed straight. When I got a little sideways, I knew I was on a good launch and at the start of a quick pass. We had added more boost and timing for that run and I could feel that it had the potential to be quicker. I stayed on it even though it was becoming a little unnerving and reset the record.” 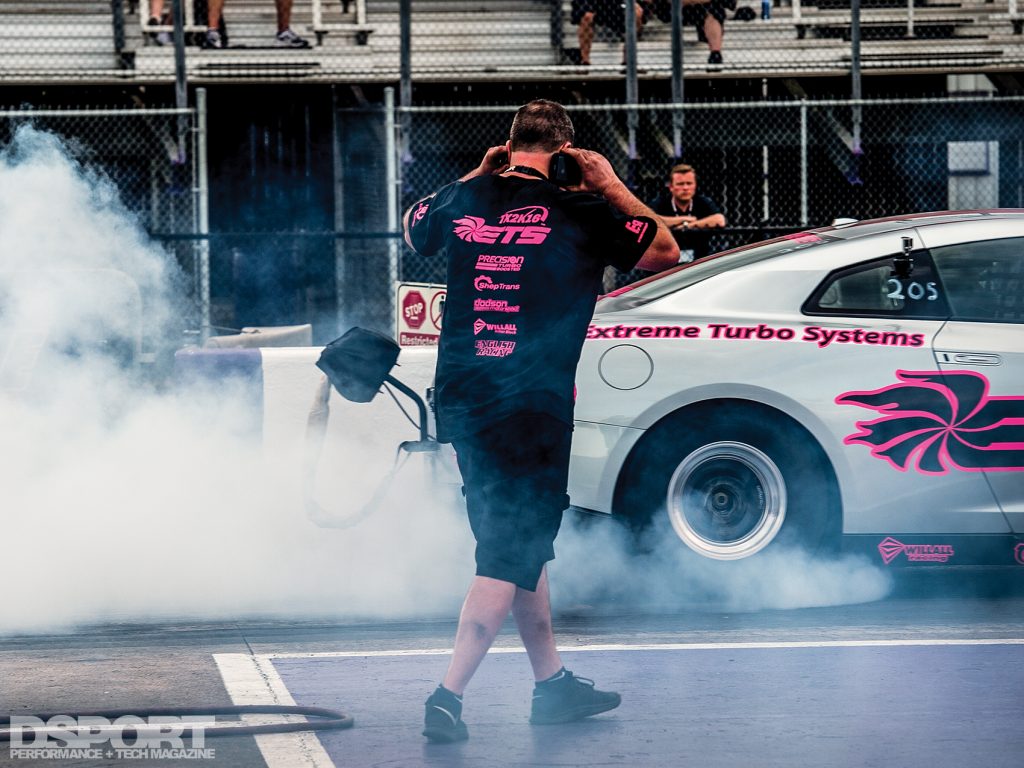 What’s To Come for ETS

Unfortunately, the heads lifted during that record pass. At 57 psi boost pressure, ETS has pushed the E98 fuel to its limit with aggressive ignition timing and air/fuel ratios. After refreshing the engine, the next step would be to switch to methanol fuel, which requires upgrading to a dual injector setup. ETS is considering a switch to a through-the-hood exhaust system, which would be lighter and less noisy to the driver compared to down pipes but would take away from the street appearance of the build. After all, retaining streetcar features like factory glass, power windows and a full interior makes this the heaviest GT-R among the top Seven GT-Rs, yet it currently ranks third in the world for the quarter mile. 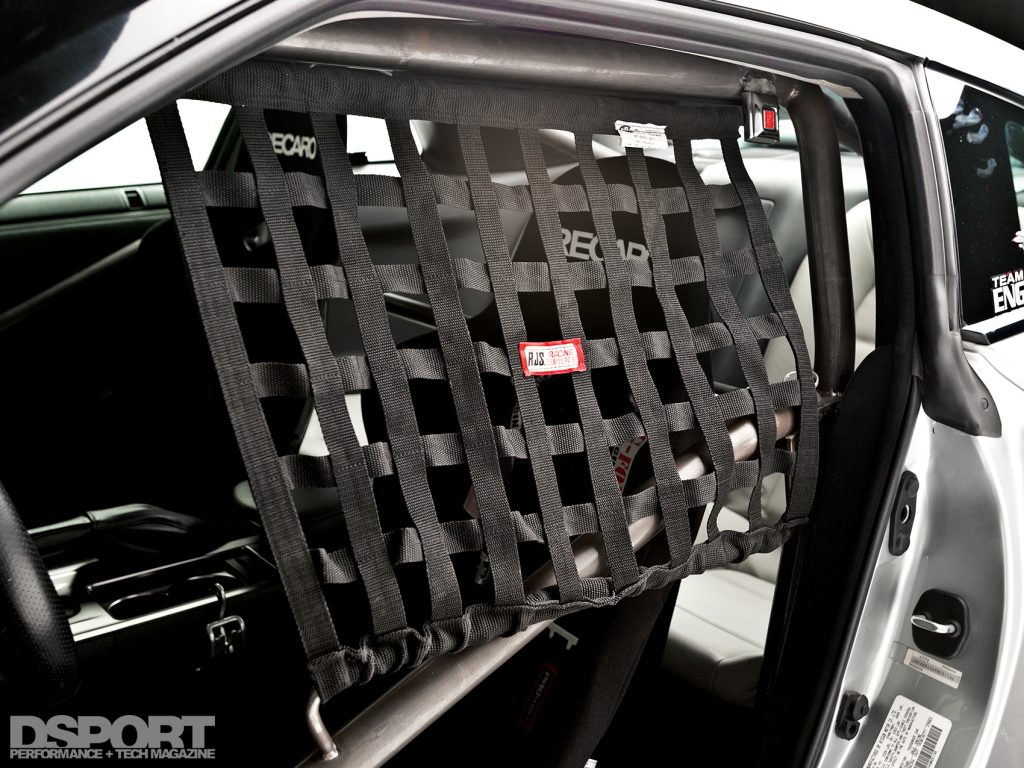 According to English, the team’s next goal is to break into the six-second realm. Feeling international pressure to break into the sixes first is both exhilarating and nerve wracking. He explained, “I love to race and it’s a rush to be on the bleeding edge of technology and vehicle capabilities. However, the constant pressure to improve just for the sake of keeping up with everyone else has taken some of the fun out of racing. The fact is, running at this level is scary. At this horsepower level, without the right track conditions and preparation, it can be very dangerous, especially when forging into uncharted territory.” As ETS and English make additional improvements to its GT-R, weight saving measures could make the difference in the race to the sixes.