Hot out the gates would be a good way to describe F Performance Garage. Founded in 2013 by Salem and Talub, this young shop located in Dubai, UAE, produced the first seven-second GT-R in Dubai and currently has the second quickest GT-R in the world. Placing emphasis on high-end, high-performance vehicle builds, the shop focuses on producing bulletproof street and racecars while keeping a meticulous eye on the details. Photos Courtesy of F Performance Garage 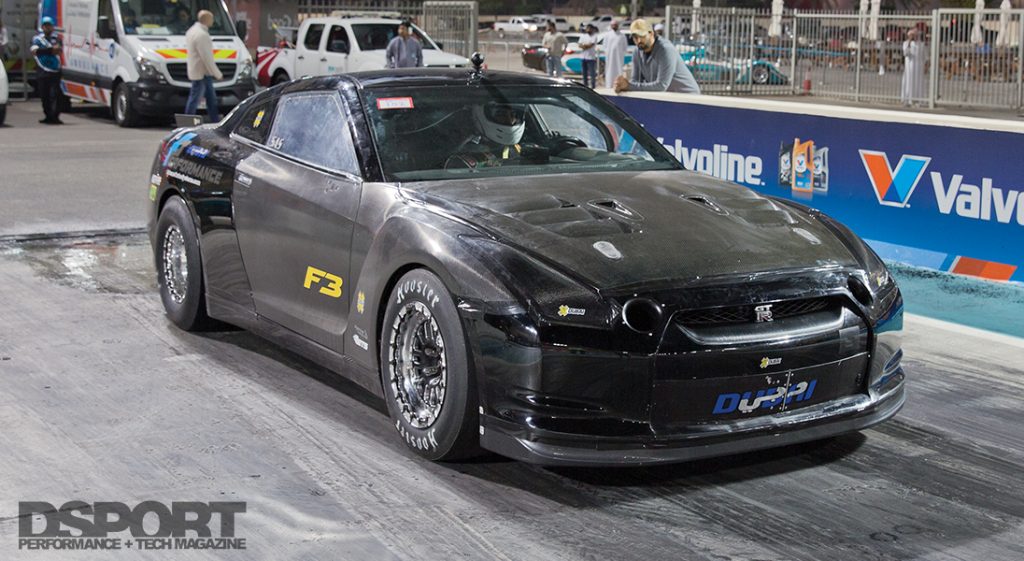 F Performance’s racecar builds demonstrate the shop’s capacities, and the time slips validate them. One customer, Saeed A., wanted his GT-R built to compete in the Yas Marina Super Street Challenge series’ Open Class in Abu Dhabi, UAE. Given F Performance’s knowledge and experience from building its own GT-R to run the first 7-second pass in Dubai, Saeed was confident they could make his GT-R competitive. Little did he know that his build would soon rank among the top seven quickest GT-Rs in the world. 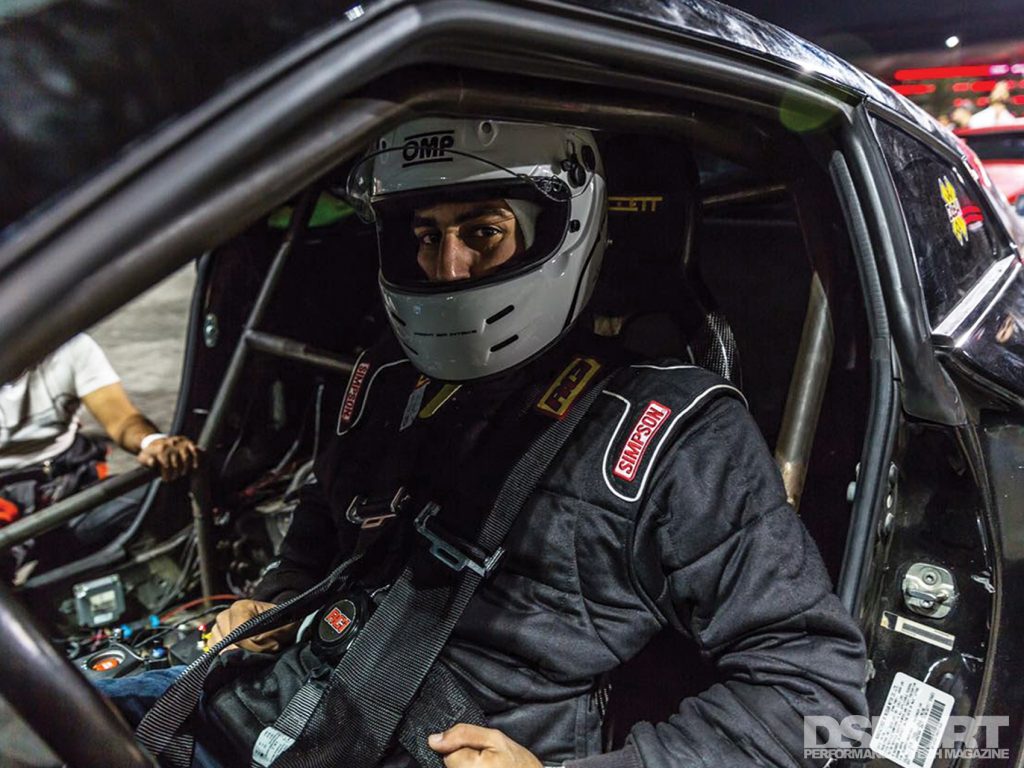 Working within the Rules

The rules for the Open Class have certain requirements that the unlimited GT-Rs competing for the world record are not necessarily bound by. Some key stipulations include the retention of a glass front windshield, a functioning factory dashboard, no alcohol or nitro methane, no billet engine blocks, no cutting of the firewall, no tube frame front ends and no back halfing. Only a single power adder is permitted, exhaust must be routed under the chassis and tire size is restricted to a maximum of 28×10.5×15-inch. Working within these constraints, F Performance went to work on Saeed’s GT-R. 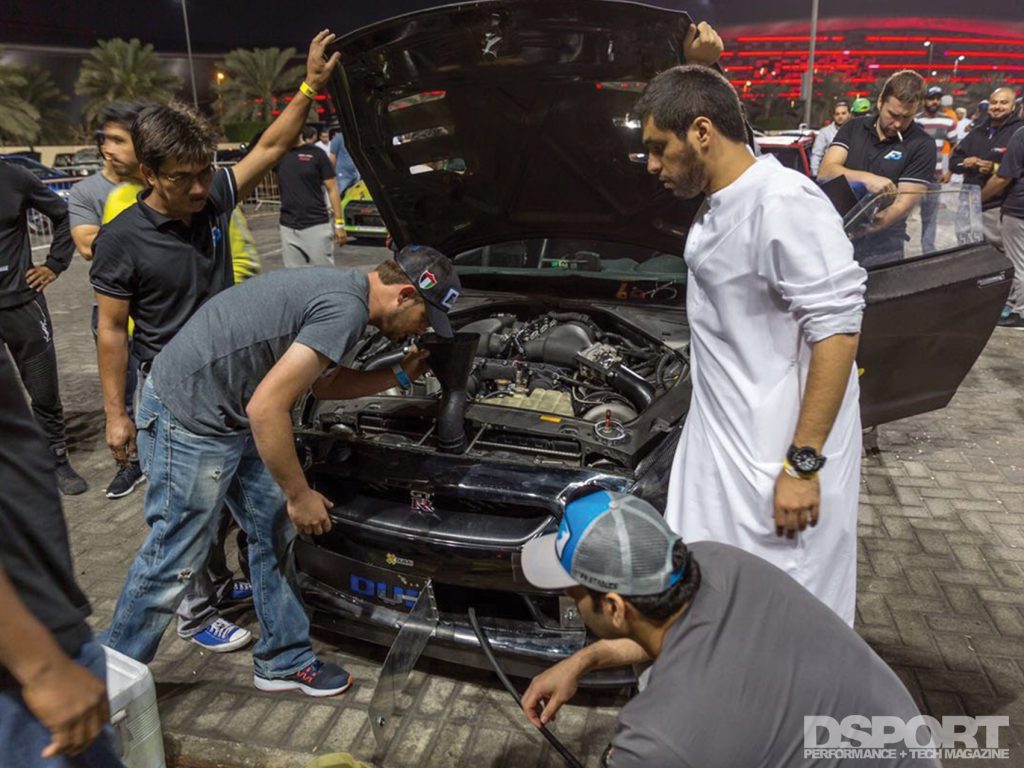 Built for the Open Class

F Performance started by removing weight wherever it could. In addition to deleting anything not essential, extensive use of carbon-fiber body panels further helped with weight reduction, making this GT-R the second lightest among the top seven. Once back on the scales, the GT-R weighed in at 3,520 lbs., a significant improvement compared to the factory curb weight of more than 3,800 lbs. At this point, fabricator Mike Morris welded in a custom cage to strengthen and stiffen the chassis. As fabrication work progressed, machinist Bernard Balagtas built the VR38 engine to the factory bore and stroke dimensions. The upgraded parts that compose the rotating assembly remain undisclosed. To pressurize the cylinders, a pair of Precision Turbo & Engine PT6766 turbochargers supplied boost pressure to the intake ports by way of a Boost Logic intake manifold. With the engine installed, the GT-R engine management system received the necessary calibrations by tuner Boyan Radomirov before spinning the hubs of a Mainline dynamometer into the 1,700 horsepower range. 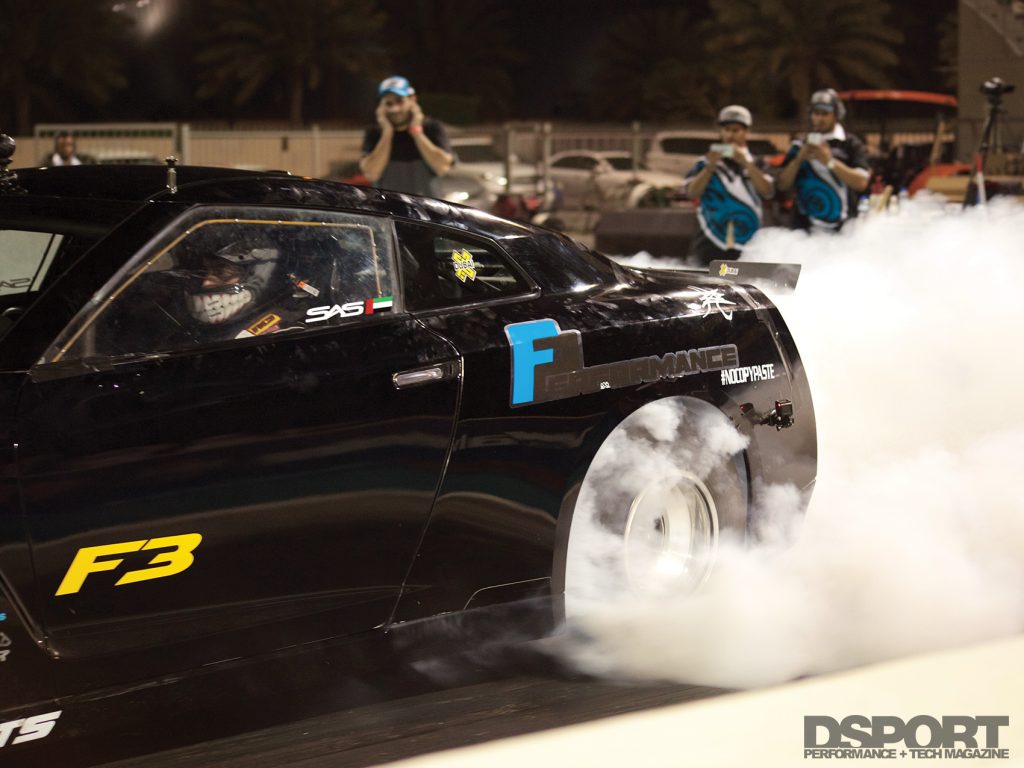 Competing with the World Class

Saeed went to the track and ran consistent 7.9-second passes with this setup at the end of 2015. F Performance produced a competitive GT-R and stepped onto the world stage in the process. Breaking the seven-second barrier set Saeed’s expectations for 2016. Balagtas went back through the engine with new bearings and gaskets and upgraded the camshafts with a set from T1 Race Development. Boost for the refreshed mill comes by way of a pair of Precision Turbo & Engine PT7675 Gen2 turbochargers. ETS top-mount manifolds positions the turbos just behind the headlights, where the inducer inlets draw in ambient air to be compressed and forced into a custom intercooler by Morris. He also made custom downpipes that exit under the chassis, as the rules require. 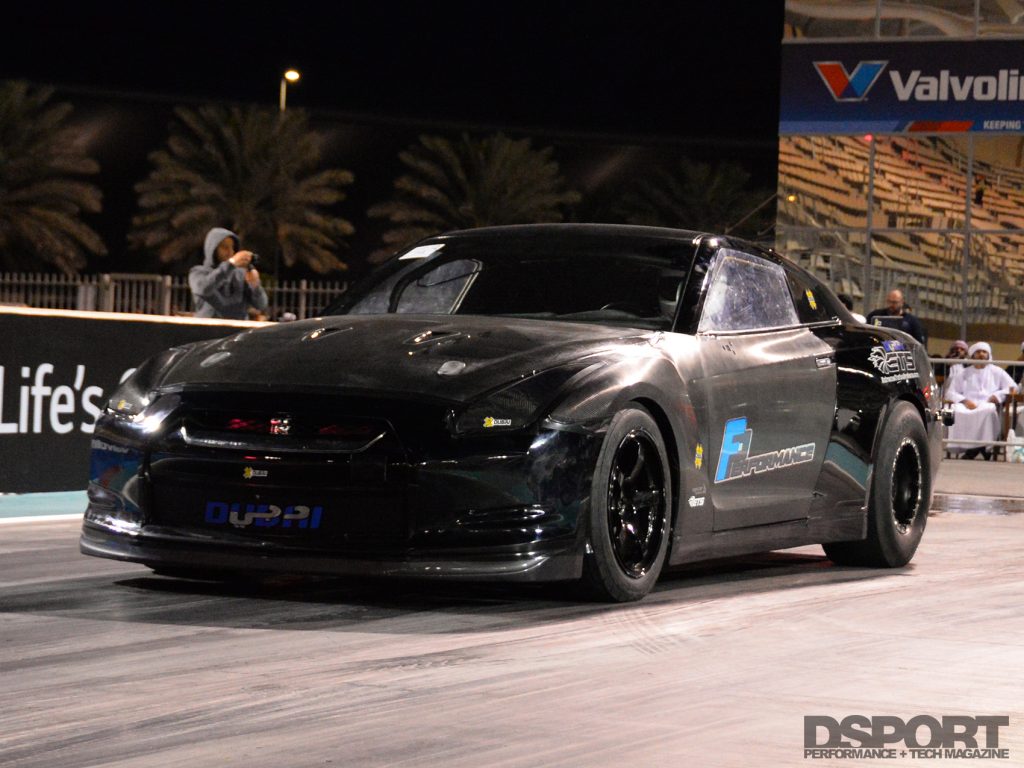 Radomirov and the crew had been working with Syvecs to improve the electronics interface and streamline the staging process through the tuning software. In addition, they’re refining an aggressive engine calibration on Saeed’s R35 that, once developed, would trickle down to F Performance’s customers. With peak boost pressure set to more than 50 psi and the tables optimized for an undisclosed performance fuel, new output figures checked in at 2,107 horsepower and 1,412 lb-ft torque, measured once again on a Mainline hub dynamometer. 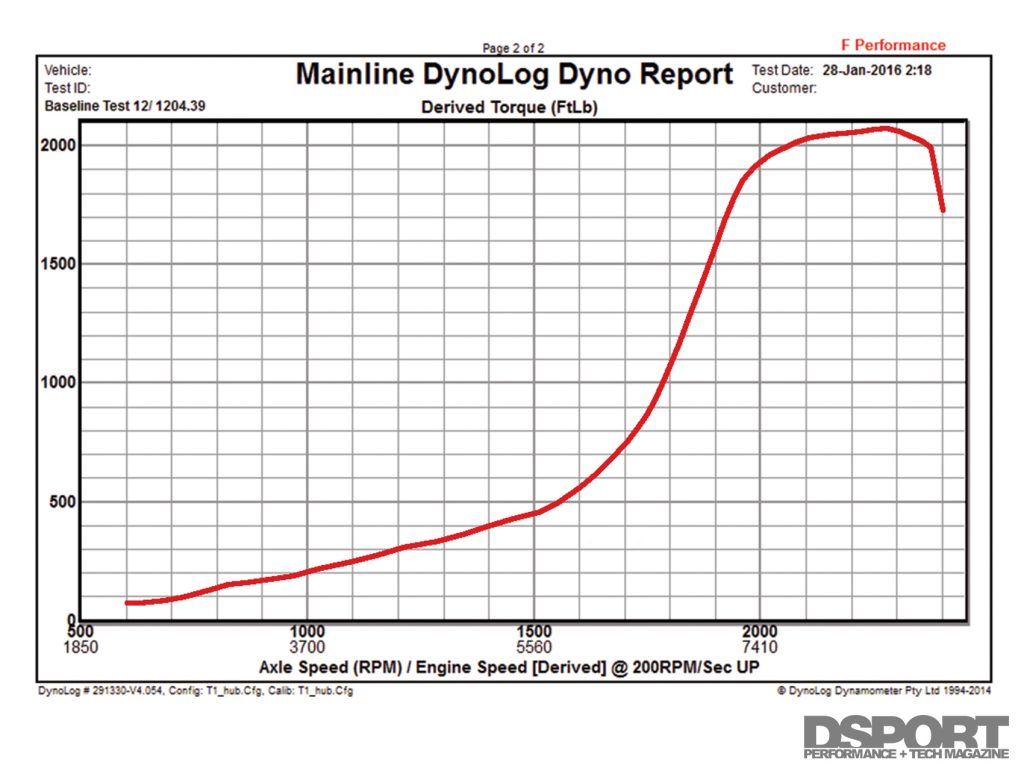 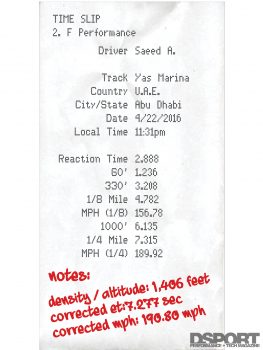 Despite conforming to class restrictions, F Performance went from number seven in the world (as of 4/5/16) to number four (as of 4/15/16) then to number two (as of 4/22/16) when they ran a 7.31-second pass at 189.92 MPH. This series of achievements have demonstrated the shop’s capabilities and mettle. With the World Record only 0.104 seconds away and the six-second barrier another two-tenths of a second beyond that, F Performance looks hungrily forward to its next trip to the track. While the World Record is just over a tenth of a second away, battling into the sixes is their focus and being first to do so is their mission. 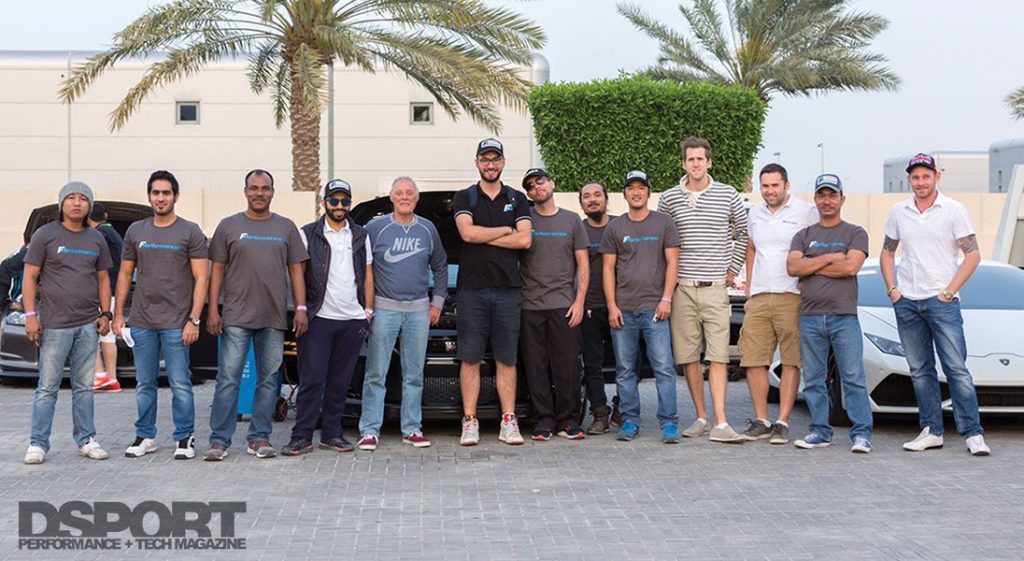