The world exposes the globetrotting to a variety of experiences that can often leave a lasting impression. In the case of Michael Treadway, serving America in the U.S. Army enabled him to visit a number of destinations throughout the world. This worldly experience opened his eyes to places that many can only read or learn about second hand. It was during these deployments that he found a passion for automotive performance. Text and Photos by Richard Fong 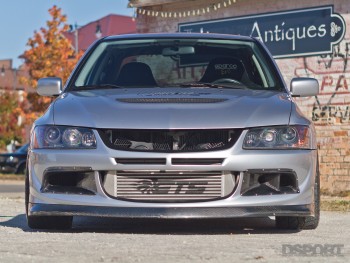 Treadway first fell in love with the Mitsubishi Evolution while in Japan. He recalled, “I chose the EVO after being stationed in Okinawa, Japan in 1999. A friend took me for a ride in his EVO VII. It was mostly stock with exterior modifications, but I remember the rush as the turbo spooled and the boost kicked in. The EVO has all the character of a true grit racecar with an attainable sticker. It’s built with the car enthusiast in mind first. And this exhilaration was achieved in a four-door sedan. I was sold at that point.” When he returned to the USA, Treadway could hardly wait to make his purchase, taking home this EVO VIII off the showroom floor in 2004. 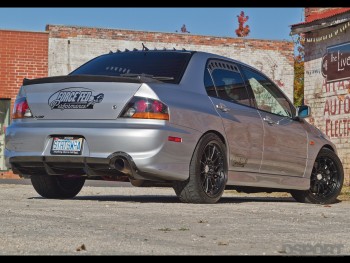 Starting with a brand new platform presents the enthusiast with a variety of paths to choose from. While the EVO has proven a versatile platform capable of impressive performance on the drag strip, on snow, tarmac and gravel rally stages, and on road courses, Treadway focused on street performance and weekend track days. His interest and addiction to twists and turns began on the touge in Japan and grew while he was stationed in Europe. In Germany, he had the opportunity to take a few laps around both the Hockenheimring and the Nürburgring, which further added to his interest in road racing. He stated, “Having the privilege to take a few hot laps around these world famous racetracks really got my attention. I turned an unofficial lap time of 8:10 around the Nürburgring which was a total rush.”
Pages: 1 2 3 4
4G63CT9ADragE85EVO VIIIMitsubishiStreetTurbocharged