In 1954, a monster named Godzilla shook the world when it appeared on big screens around the world. Godzilla went on to make tons of appearances, scaring children from all across the globe and becoming the face of monsters. In 1989, Godzilla returned, this time in the shape of the Nissan Skyline R32. The capabilities of Nissan’s best offering proved to be the true King of the Monsters. By the time the R35 GT-R came onto the scene, Nissan had sacrificed the rawness of their GT-R to compete with super cars around the world in terms of technology, putting an end to the Godzilla nickname and starting a new era in automotive performance evolution. The R33 GT-R is portrayed by many to be the underdog of the GT-R lineup. Under the shadows of this platform lies a little sibling named GT-S-25T. This platform may not be a GT-R, but it’s a capable vehicle worthy of being a little Godzilla of its own. 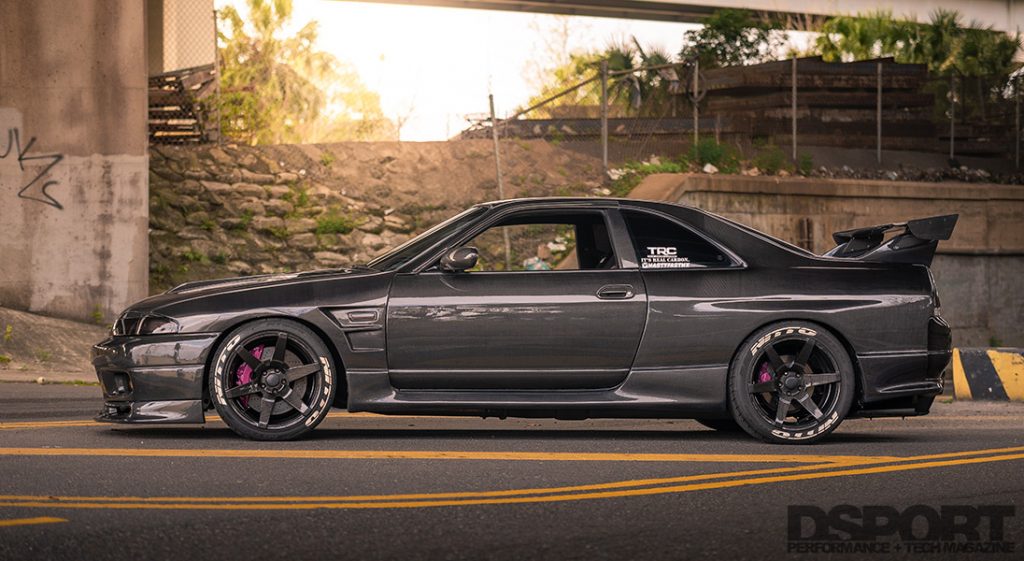 While the R33 GT-R is known for its legendary RB26DETT engine, the GT-S-25T sports a smaller version of the RB-line. The first version of the RB25DET was found in the 1993 Nissan Skyline R33. The turbocharged cast-iron block ran on 7 psi of boost to deliver 250 horsepower and 213 lb-ft of torque. One of the major differences between the RB26 found in the GT-R and the RB25 found in the GT-S is the twin-turbochargers vs the single turbocharger, respectively. While the GT-R is known for its all-wheel drive configuration, the GT-S comes as a rear-wheel drive platform. This sacrifices some of the legendary handling capabilities, but it makes it a fun car if you’re a fan of drifting or just simply fishtailing around corners. Does this mean this car can also be a capable platform that gives its owner the same feelings a GT-R would? Jason Garcia proved that the GT-S can be a vicious beast through his one-of-a-kind build. 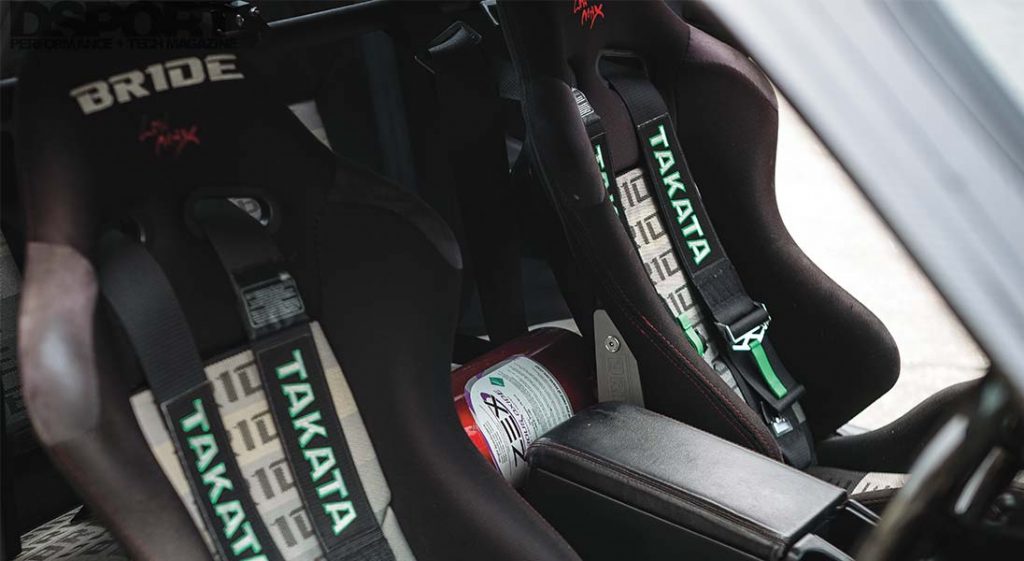 The cabin is complemented with Bride seats and Takata harness, as well as a carbon fiber steering wheel. Soon, the interior will be all carbon fiber to match the exterior.

It’s no secret the R33 Skyline is often overlooked amongst its siblings the R32 and the R34. This was one of the reasons Jason Garcia chose this platform. Being a fan of the underdog, Jason bought his R33 in May of 2013 to fulfill a childhood dream. The goal was to build a 1,000whp Skyline that can handle the corners on the track, as well as stay functional enough for the streets. For this build to be unique, however, Jason wanted to do an all-carbon fiber exterior. Aside from the significant weight cut that the carbon fiber would offer, it would also make it one of the only Skylines with all-carbon exterior.

When Jason first purchased his Skyline, it was bone-stock. With big plans ahead of him, Jason had to not only work around his busy schedule, but the shops he was dealing with as well. The shops made the journey that much harder, making promises they couldn’t keep, not to mention lying about installing certain parts when in fact they didn’t, but the real challenge was getting the car prepared for the 2017 SEMA show where it was set to be debuted. While the engine was being prepared to make the power Jason had as a goal, he was busy searching for carbon-fiber parts. He found the hood, fenders, and trunk, but that wasn’t enough to make it an all-carbon fiber R33. 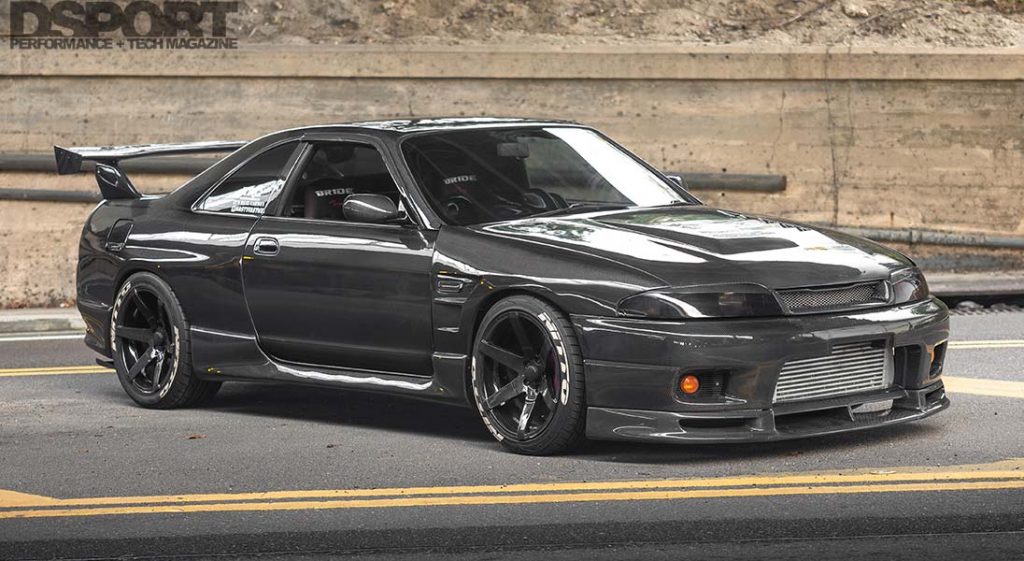 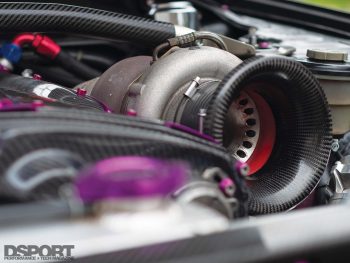 Being a pioneer pays off, but it also means you have to reinvent the wheel. Jason found a company in England that offers some carbon fiber parts for his car. He then found a widebody kit for the rear, so he cut the rear quarters himself to install the wider fiberglass parts. The roof was overlaid with real carbon fiber, and the fiberglass quarter panels were also covered in real carbon fiber. It took a lot of searching and frustration for Jason to find the remaining carbon fiber parts to make this car officially all-carbon, but the results where exactly what he had in mind. Just like that, Garcia became the owner of an all-carbon fiber R33 Skyline. The carbon parts reduced the weight of the car by 400-pounds, resulting in an R33 that weighs just 2,656-pounds. Next on tab was addressing the engine before having to make his way to SEMA. 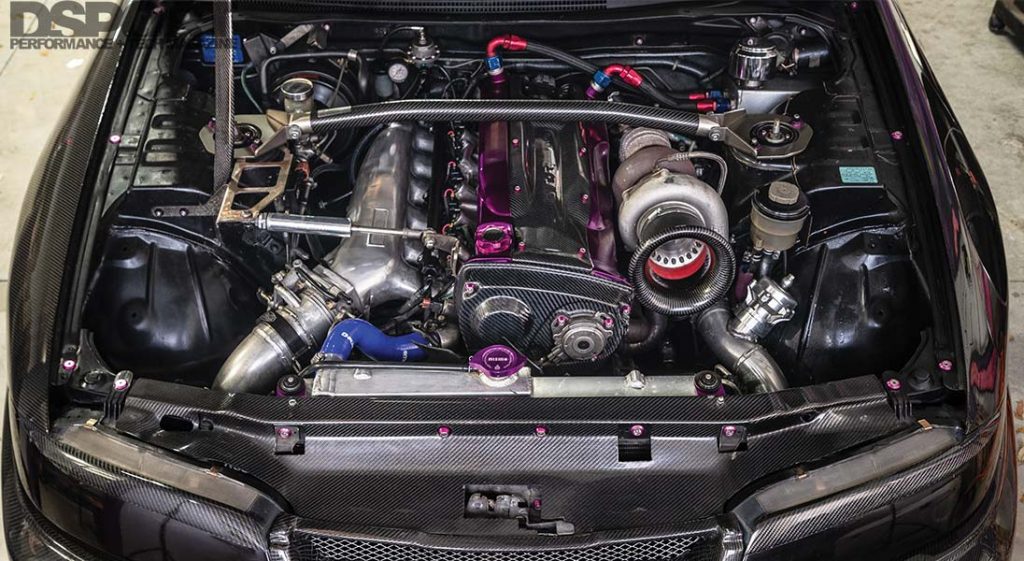 The RB25DET is forced air using a single turbocharger. With the help of the supporting upgrades, this engine delivers 840whp and 672 lb-ft of torque.

The engine was equipped with high performance internals, like Tomei pistons and rods and King Racing bearings. With two fuel pumps feeding 1650cc injectors, and air being forced by a Precision 6466 turbocharger, Jason Garcia’s Skyline made 840whp and 672 lb-ft of torque. To complement the power, Jason equipped the R33 with HKS Hypermax coilovers, Whiteline sway bars, and a full suspension arm kit from KnightRacer. You can’t go quick around the track if you can’t stop fast enough, so Jason replaced the factory brakes with Mercedes AMG 8-piston Brembo brakes. The Skyline was finally able to make the power and support it around the track, but the road to SEMA wasn’t in any way easy.

Between finding all of the carbon fiber parts and doing the turbocharger upgrade and engine build, meeting the SEMA deadline was becoming more and more of a challenge. As Jason worked with some unreliable shops, he entertained the idea of cancelling the R33’s debut at the 2017 SEMA show, but fortunately, he was able to get the car prepared just four days before having to leave to Las Vegas. All of the obstacles and challenges paid off once the Skyline made it to the SEMA floors. Seeing the reaction on the SEMA attendees’ faces, and getting worldwide recognition for all of his hard work and unique vision made every frustration throughout the journey worth it. Jason Garcia plans on going with an all-carbon interior as well. But his next big thing will be doing an all-carbon fiber R34. So if you think you’ve seen everything Jason has to offer, you may want to think again.