Few people truly understand the addiction with the need to go faster. For the auto enthusiasts, the first purchase and install of a simple bolt-on exhaust was the gateway drug to a totally different lifestyle. Before long, the home garage is decked out with tools and shop equipment, and your most beloved car is a living example of your many hours of studying and labor. And no matter how much you’ve put into dressing up your workspace or building up your project car, there’s always room for improvement. Sana Dadabhoy of Los Angeles knows this path of addiction, and picked the perfect drug that has her constantly on the hunt for a little extra – a 2015 Nissan GT-R. 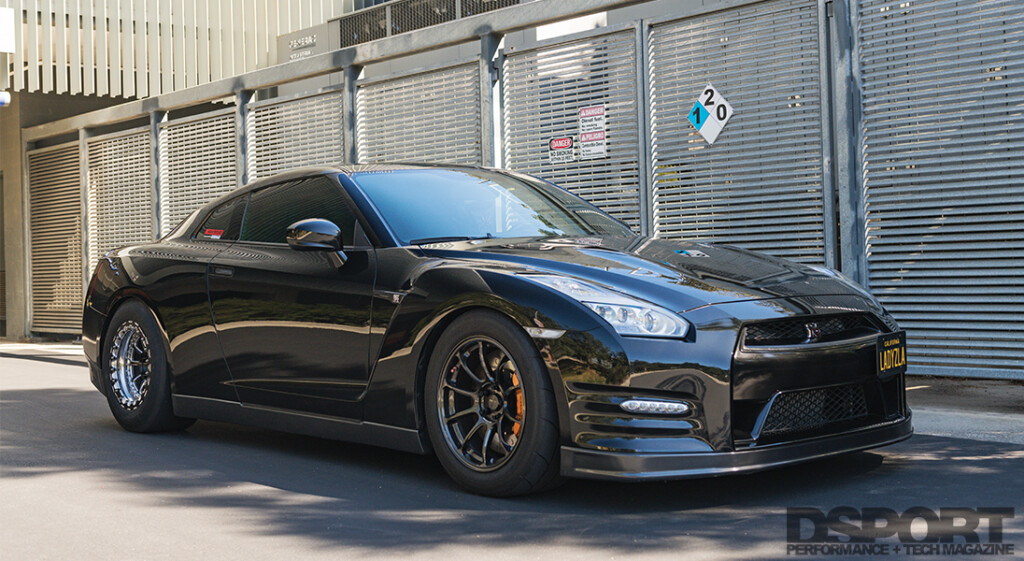 Sana wasn’t new to Nissans when she acquired the R35. Despite graduating Toyota’s Technician Training Program and working as a Lexus technician, her garage housed a 2008 Infiniti G37 followed by a 1991 Nissan 300ZX. The 300ZX served as her first project car, one that expectedly proved to become a major challenge. Doubling as her daily driver and passion project, mechanical and electrical issues eventually made it too difficult to justify keeping. A modest 2011 Lexus IS350 held her over until she took home the 2015 GT-R, which she planned to enjoy as-is.

Sana had no plans to go big with this project, it was the fastest car she had ever driven up to this point. She was impressed by the acceleration and handling, especially when considering the car’s weight. She found little need to make any big changes to the car, until she discovered drag racing. Once she put the car on track, she started small with the basic bolt-ons, which grew to much more significant tasks once she started setting greater goals. 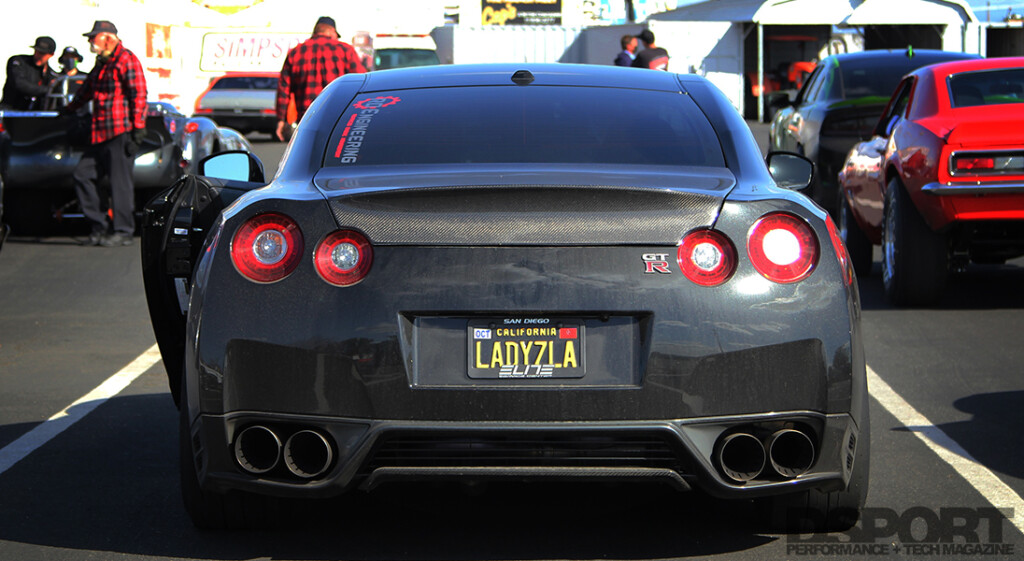 At best, a 2015 GT-R should cover a quarter mile in about 11 and a half seconds. As is the case with any drag or track car, milestones are made at seconds, then tenths of a second, then hundredths. Sana had no interest in turning her R35 into any sort of bright and loud parking lot show car. She had simple goals for this project – keep it streetable and enable it to run a quarter mile in the mid 9s. Any parts used would be in the interest of performance, and nothing would be there just for show. 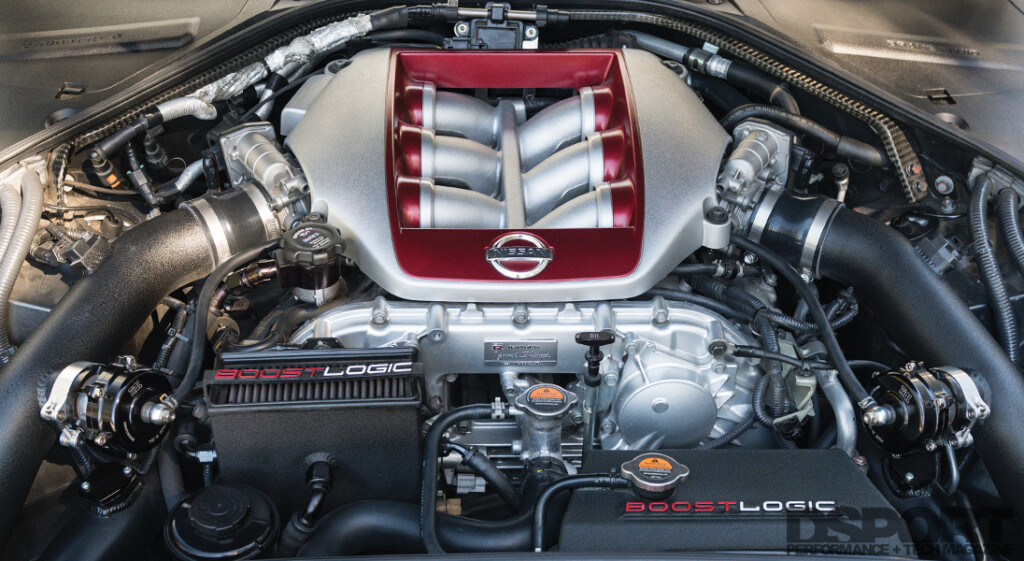 After doing her research on the R35 platform, Sana started small with bolt-on parts and a flex fuel kit. Today, the car flexes significantly more out of the original VR38 engine, running all stock internals. Cobb intake pipes and Boost Logic turbo inlets draw air into a pair of RDE800 turbochargers with TurboSmart wastegates and Tial blow-off valves. A Rampage Fab intercooler brings the intake air temperature down as it heads into the cylinders. Dual Walbro 485 fuel pumps add E85 to the mix by way of Injector Dynamics ID1300x2 injectors. Delicious Tuning’s flex fuel kit manages the ethanol/gasoline ratio for the R35 to burn. With these simple but effective add-ons in place, the VR38 sings its tune out of an AMS downpipe and HKS Spec-R muffler.

The added air and fuel features called for upgraded engine management. In this case, an Ecutek ECU went into the R35 and Ronnie Diaz at RD Engineering took on the task of tuning the car to run a 9.64-second blast at 144mph. This brought the car to a power level that rides along the sweet spot of still being fun to drive without being a chaotic handful. 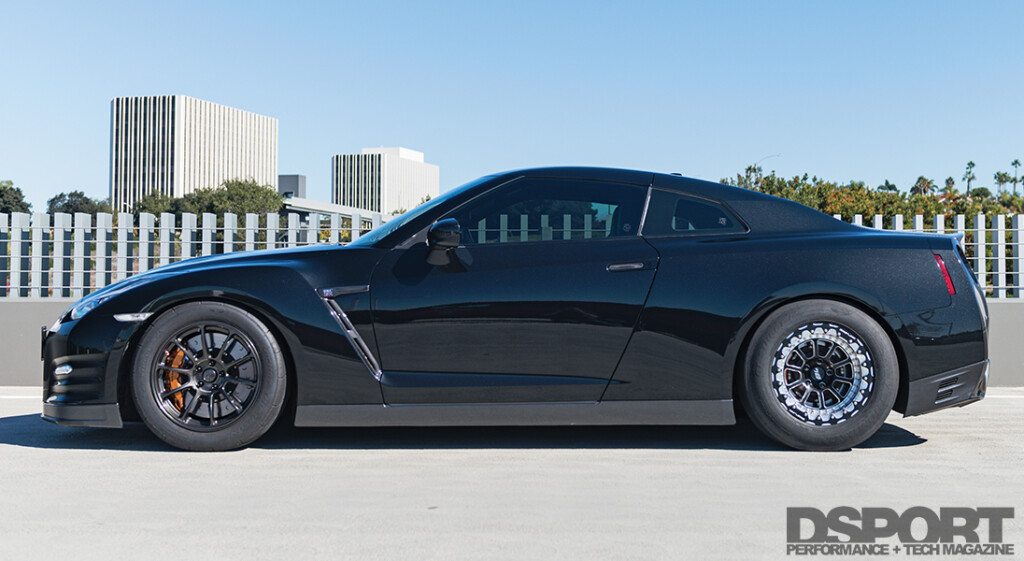 Although Sana loved the extra power, the rest of the drivetrain had a tough time coping. When at the track, she was put up against overheating clutches that started costing her races. Upon learning of the transmission as a potential weak link in the chain, she decided to make more than a few related upgrades for some better peace of mind. A Dodson FWD clutch plate upgrade went in place of the original equipment for better heat toleration and friction, a must-have for her trips to the drag strip. Sana then took it a step further with a ShepTrans Stage 1.5 transmission, utilizing a billet 1st gear and ShepTrans 7-plate clutch for more reliable and better performing launches and gear changes.

When it came to the driving experience of handling and braking, Sana kept in tune with function taking priority, and keeping the car modest enough to enjoy on the street. To this end, she retained the OEM dampers but installed Eibach’s Pro-Kit springs for a better controlled ride and weight transfer. A slight drop of just 0.8-inches at the front and 0.5-inches at the rear keep the car more grounded in the corners, without going overboard or inconvenient for public roads. The OEM brake calipers on the GT-R were plenty capable, so Sana chose to just swap in Alcon brake rotors and Endless MX72 brake pads at all four corners, with tougher AMS stainless steel braided lines feeding the calipers.

Extra power and improved handling components meant a need for some new rubber to stick the car to the ground. Sana aimed for simple but tasteful with the car’s overall appearance, equipping it with Volk ZE40 front wheels, size 18×10. However, performance was priority as she installed 17×11-inch Boost Logic/Belak Industries 10 spoke beadlock drag wheels at the rear. A pair of Mickey Thompson ET Street SS 275/45R18 tires sit up front, while Mickey Thompson Street R Bias Ply 28×11.50-17 tires grab the road at the back. 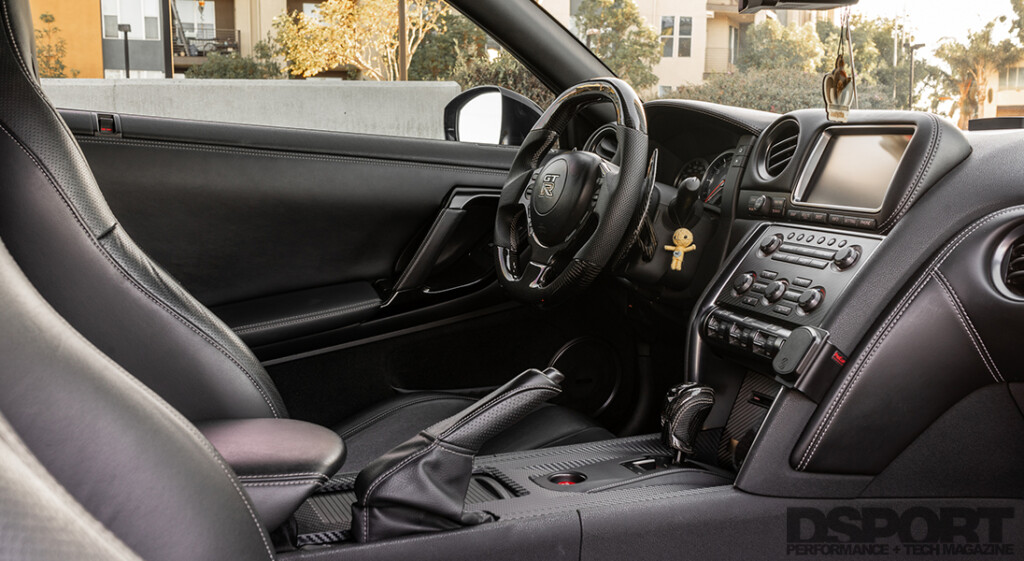 Sana treated this R35 like a wise investment, only putting money and her own time and labor into what will make the car perform better. On the inside and outside, there is little to be found that isn’t simply factory equipment. She traded out the original steering wheel, paddles, and shifter for Carismo Design custom carbon fiber replacements. On the outside, an AMS carbon fiber duckbill trunk lid blends into the factory black aesthetic for downforce and an uprated aggressive appearance. 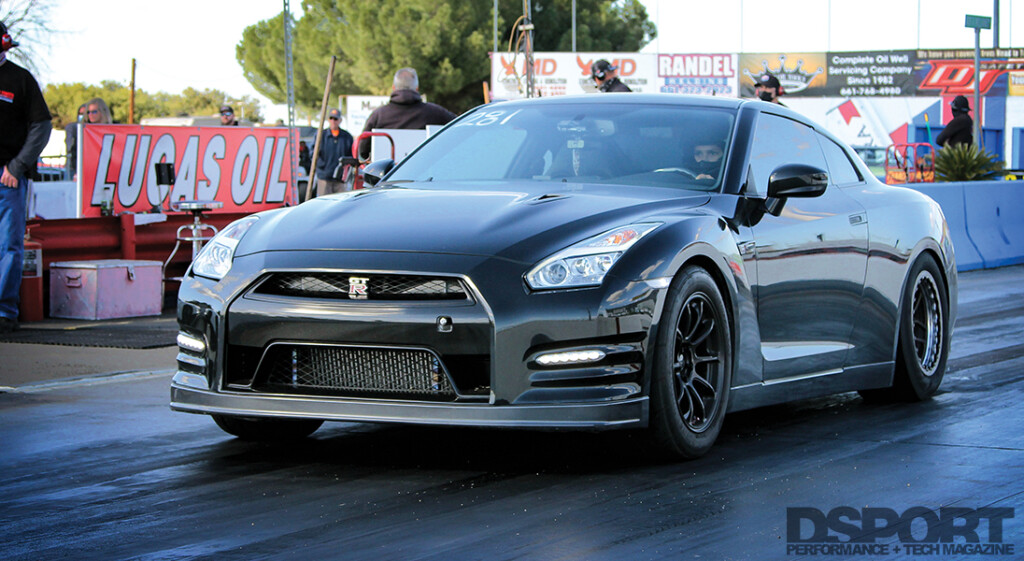 For Sana, this R35 is a never-ending project, but she seems to like it that way. Nearly every modification came just bit by bit, as she identified areas of improvement to dial in the car exactly how she wanted. She managed to achieve her goal of a mid-9 by running a 9.64-second pass at 144.91 MPH in the quarter mile, which she’s happy with for a full weight GT-R still on the stock motor. Further, she managed a 5.2-second run from 60-130 MPH, verified by Dragy. Now that she’s hit her goal, she’s already looking for more. She’s gearing up to retire the stock motor and invest in a fully built engine. With sights set on exceeding 1,000 wheel horsepower and touching the 8s with her R35, there’s no end in sight as she looks to keep having fun tinkering, building, and driving her dream car.

The R35 has no doubt made a massive impact on the tuning community. The platform was introduced as a near impossibly good value for the performance that it delivered from the factory. This was only further benefited by how well it took to modifications, which the aftermarket industry instantly recognized. Sana gets her own hands dirty when it comes to upgrading her GT-R, and is happy to report that the process has been nearly problem-free throughout the journey. Beyond that, she’s found help and support from the GT-R community throughout this build, stating that “the best moments were building my car with all of my friends in the GT-R community. I have met some of the most kind, humble, and all-around amazing people all because we drive the same car and have the same passion. I did most of the work myself, and I’m so glad that I had like-minded people to help me.”