WHAT DO YOU DO WHEN YOU LOSE A STREET BATTLE? If you can’t beat them, do you join them? About 12 years ago, Dusty Womack was on the prowl in his modified 1998 Mitsubishi Eclipse GSX. Tuned to deliver 400 all-wheel horsepower, the GSX broke off Corvettes and Mustangs at will. There were no cars on the streets that could challenge the 4G63 rocket. It was the ultimate street predator. At least that’s what Dusty believed until he attempted to pounce upon a large-winged import on the highway. Positioned broadside to the vehicle, Dusty downshifted and mashed the gas. The Toyota did the same. In a matter of seconds, that shopping-cart wing became smaller and smaller as it pulled away toward the horizon. The predator had become the prey to a JZA80 Supra Turbo. Text and Photos by Richard Fong 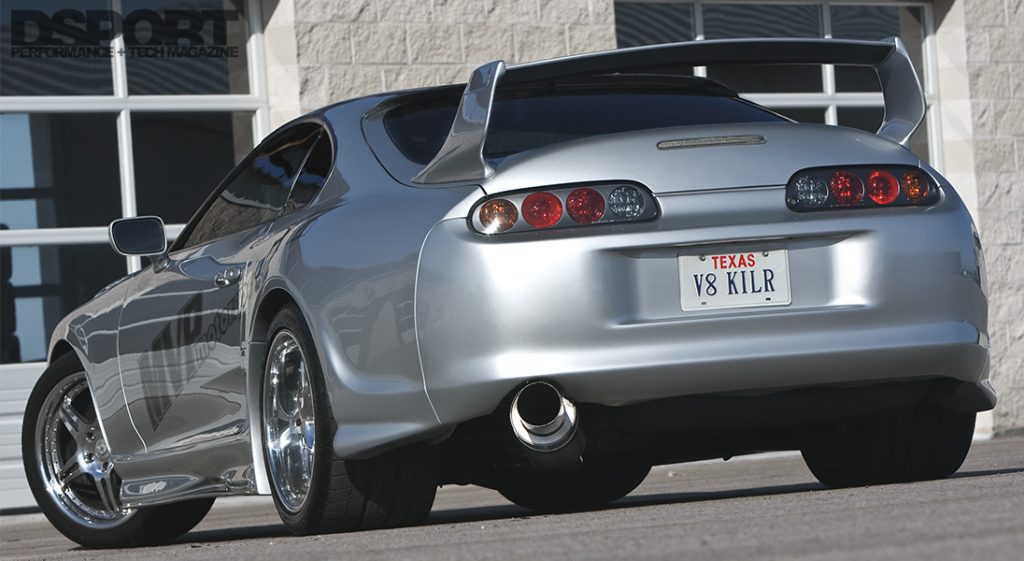 After seeing Jaws, the “we’re gonna need a bigger boat” mentality took over. Dusty located a Supra Turbo less than one week after the incident. Unfortunately, this new project car was nowhere near where Dusty wanted or expected it to be. Perhaps, the red racing stripe and missing exhaust tip were meant to steer performance enthusiasts to another car. To truly dominate the local streets, the Supra would need attention in nearly every department.

While stock-block 2JZ-GTE engines can deliver phenomenal power increases with the proper mix of bolt-on components, increasing the strength and displacement of the engine pays dividends. MVP bored and honed the 2JZ- GTE’s cylinders to 87mm, decked the block to ensure a perfectly-flat mating surface for the cylinder head and line honed the main journals to ensure a perfect axis for the crankshaft to rotate. MVP Motorsports also reworked the oil passages for improved lubrication. For the rotating assembly, HKS 8.75:1 compression forged-aluminum pistons connect to the HKS stroker crankshaft by way of HKS forged-steel connecting rods. The larger bore combined with the longer 94mm stroke increase the total displacement by 3,353cc (an 11-percent increase). The bump in displacement not only increases the torque output of the 2JZ engine, it also increases the mass of high-enthalpy exhaust gasses available to drive the turbocharger for improved response. 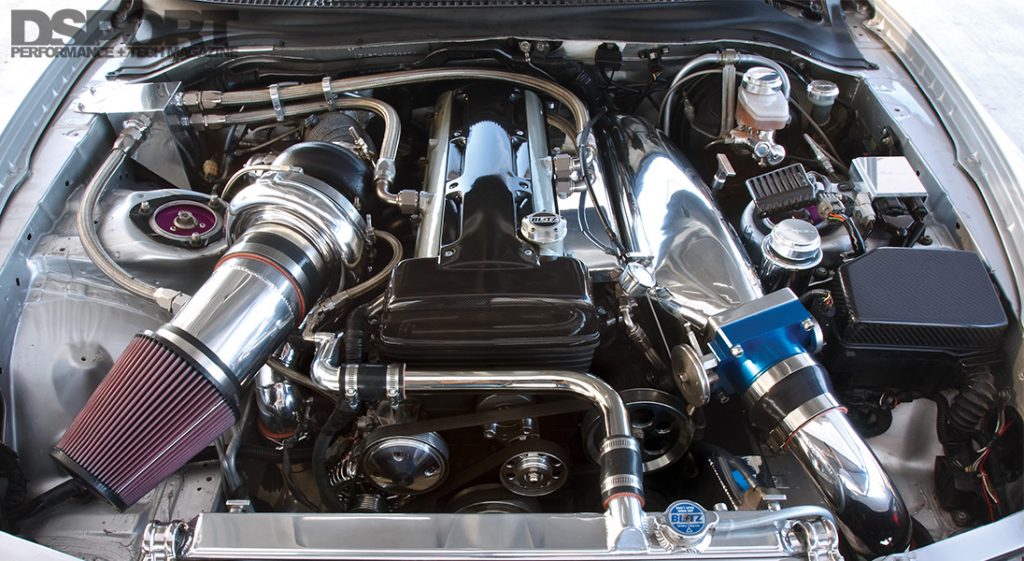 Adding displacement to an engine will increase torque output, but improving an engine’s volumetric efficiency (VE) will help it to produce more power-per- liter of displacement. To enhance the VE of the engine, the cylinder head, valvetrain and camshafts were all addressed. Powerhouse Racing (PR) treated the cylinder head to its CNC-porting program. The CNC-porting process ensures that each and every port is optimized for equal and additional flow. A set of PR +1mm stainless-steel valves supported by dual valve springs and titanium retainers take advantage of the enlarged ports. Custom-ground PR camshafts lift the larger valves higher and longer than the factory bumpsticks. To contain the incredible cylinder pressures that result from 1,000-plus horsepower operation, ARP L19-alloy studs and an HKS 1.6mm head gasket ensure a positive seal between the head and the block. 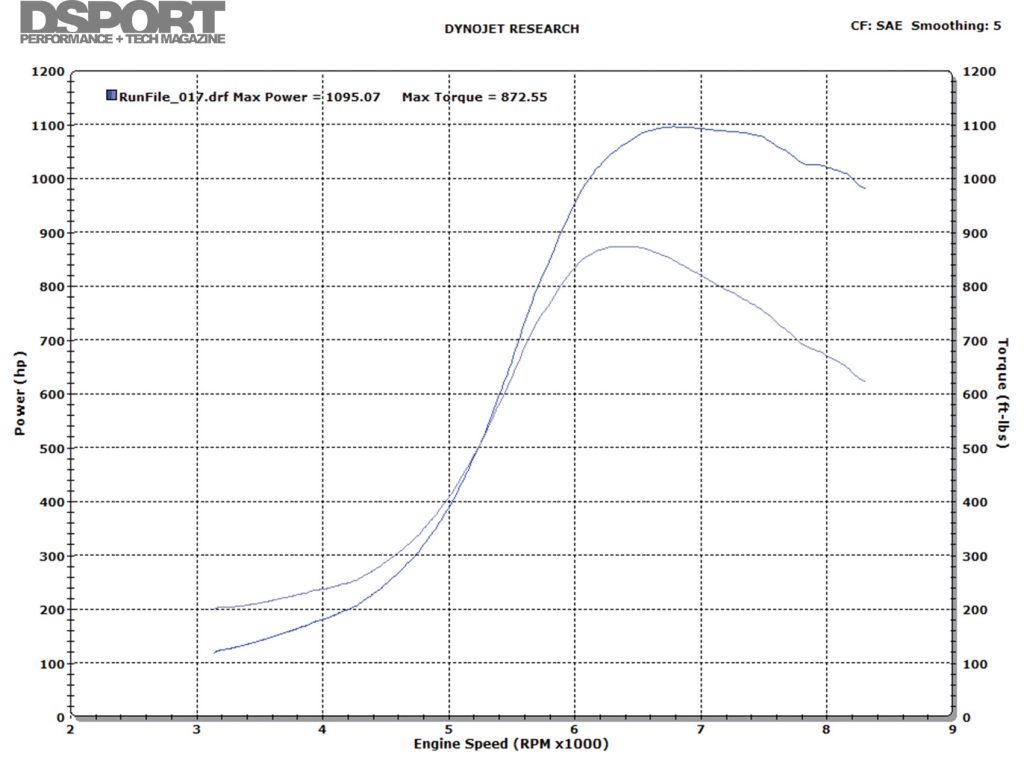 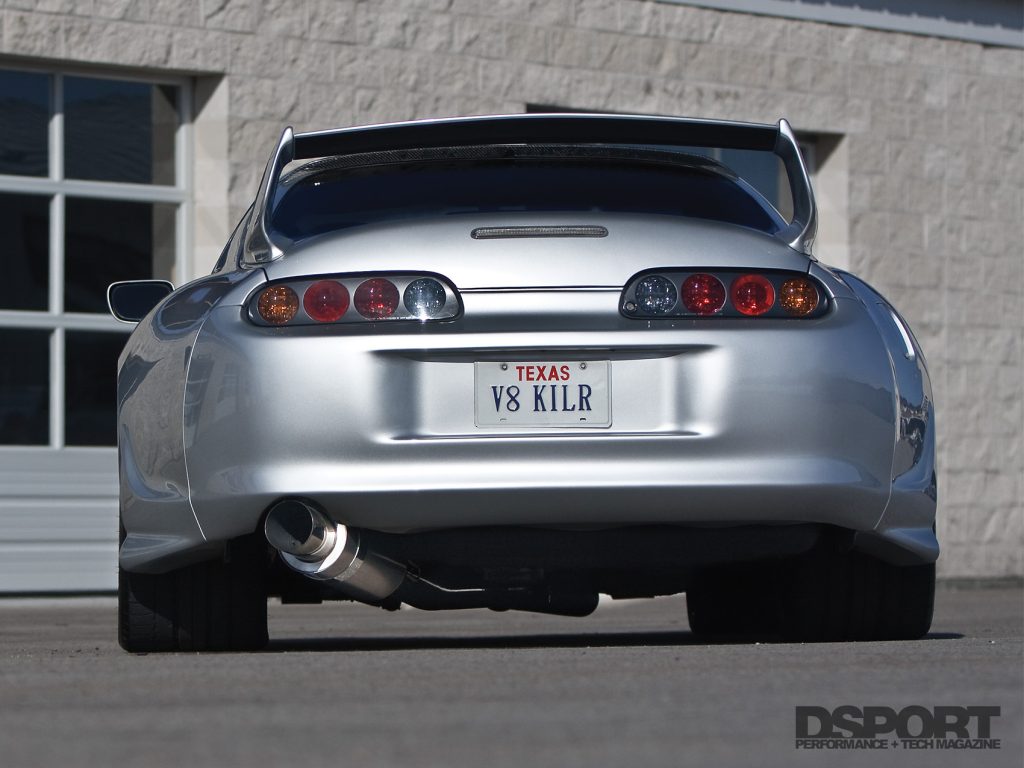 In order to be satisfied with his build, Dusty looked for a unique appearance that would set his Supra apart from all others on the road. He decided on a full Ridox wide-body kit from Japan. Ridox, a brand affiliated with Japanese professional driver and Supraphile Manabu “Max” Orido, set this quicksilver Supra apart while staying true to much of the original factory bodylines. A TOP SECRET hood was customized with a slight bulge to accommodate the large compressor housing of the PR turbocharger. As a finishing touch, a Rod Millen Motorsports carbon-fiber wing replaced the stock unit on the hatch lid, delivering additional downforce over the rear wheels.

Big power requires a big turbo. An equal-length Full Race manifold collects and channels the exhaust gasses into the inlet of the PR GT80 DBB turbocharger. To cool the pressurized charge air generated by the mammoth compressor, a GReddy 4-row front-mount intercooler takes its place in the front bumper. Once chilled, the cooler, denser air reaches the 100mm throttle body of the Veilside intake manifold. The Veilside manifold delivers the air evenly across all six intake ports. 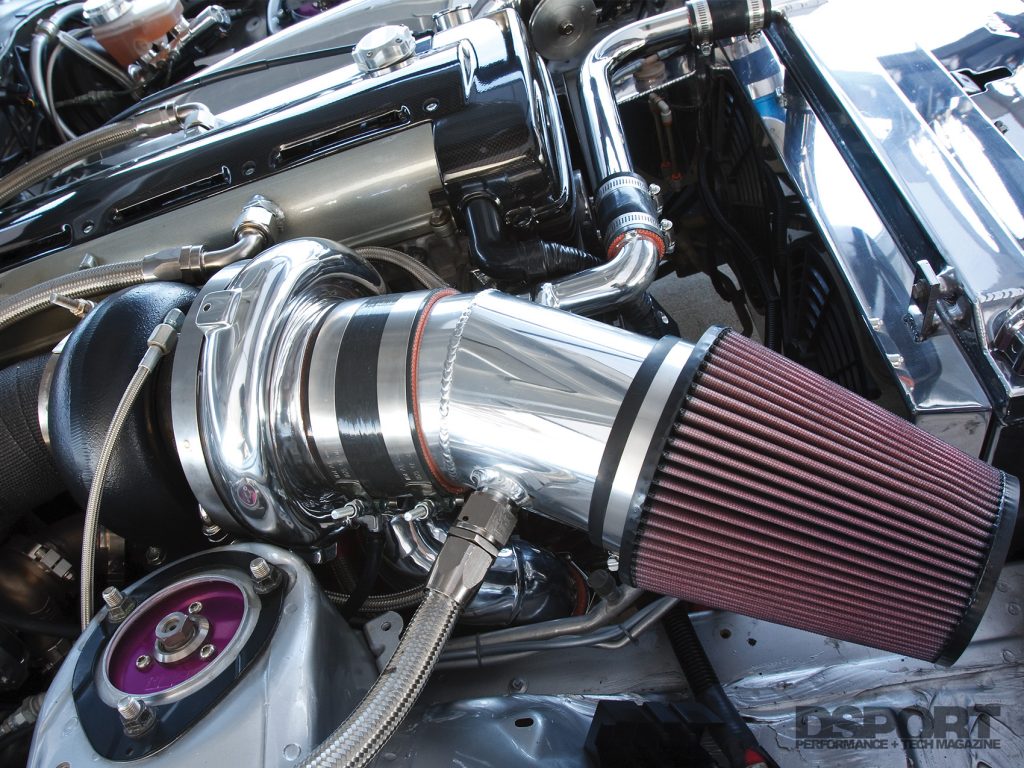 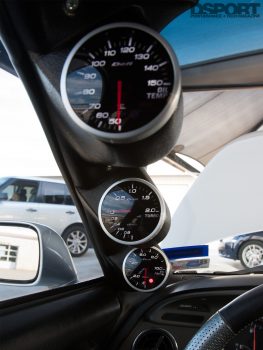 While delivering the airflow required for quad-digit horsepower is the big challenge, not having an adequate fuel supply can wreak havoc. To avoid these issues, this Supra relies upon an in-tank triple-pump system from MVP. The in- tank triple pumps offer an adequate supply of fuel without the noise associated with external fuel pumps. The pumps feed a six-pack of RC Engineering 1,200 cc/min injectors. An HKS F-CON V Pro engine management system was mapped to provide the proper injector pulsewidths based on engine RPM and boost pressure. The V Pro also triggers the ignition system. Since high cylinder pressures dramatically increase the voltage requirements at the spark plug, the factory ignition system wouldn’t be up to spec. Instead, an HKS Twin Power DLI II ignition amplifier charges the MVP coil packs. The coils deliver the high-voltage  energy to the NGK BCPR 7ES spark plugs to ignite the air/fuel mixture. With the HKS EVC EZ boost control regulating the dual 44mm TiAL Sport wastegates to 36 psi, this Supra spun the rollers of the Dynojet dyno to the tune of 1,096 horsepower and 945 lb-ft of torque to the wheels. 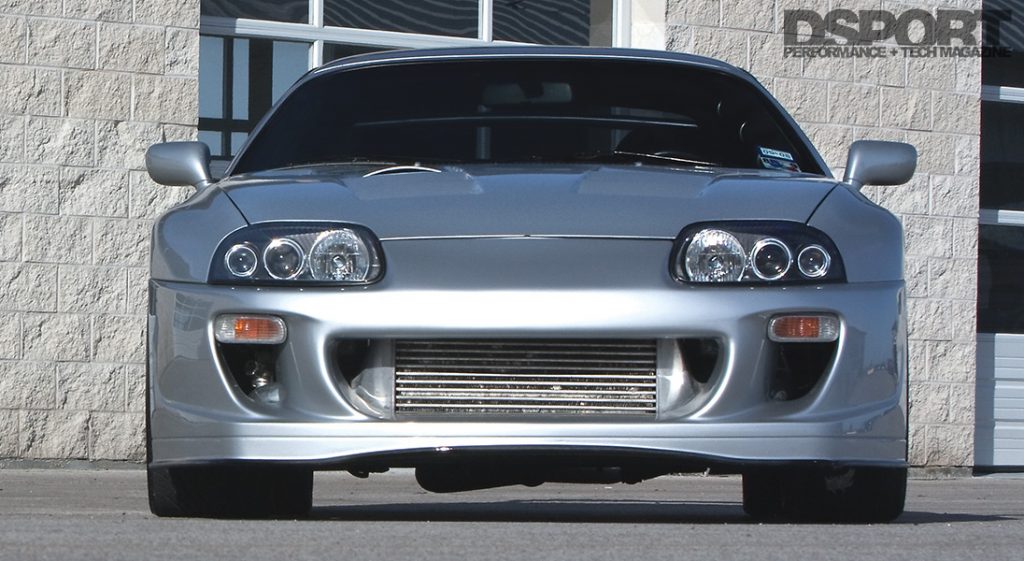 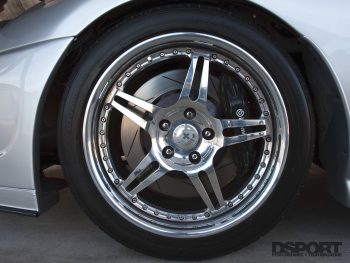 Harnessing nearly 1,100 horsepower requires significant driveline improvements. After testing several different clutch options, an RPS billet triple-carbon clutch proved to deliver the power while offering near-stock drivability. RPS claims that its lightweight billet clutch cover combined with the triple carbon-carbon disc setup can handle 1,200 lb-ft of torque. Once transfered through the clutch, the power is then fed to the factory Getrag transmission. A PR driveshaft links the transmission to the TRD LSD that splits power between the 12.5-inch wide HRE 597 wheels wrapped with 345/30R18 Michelin Pilot Sport tires on the street. 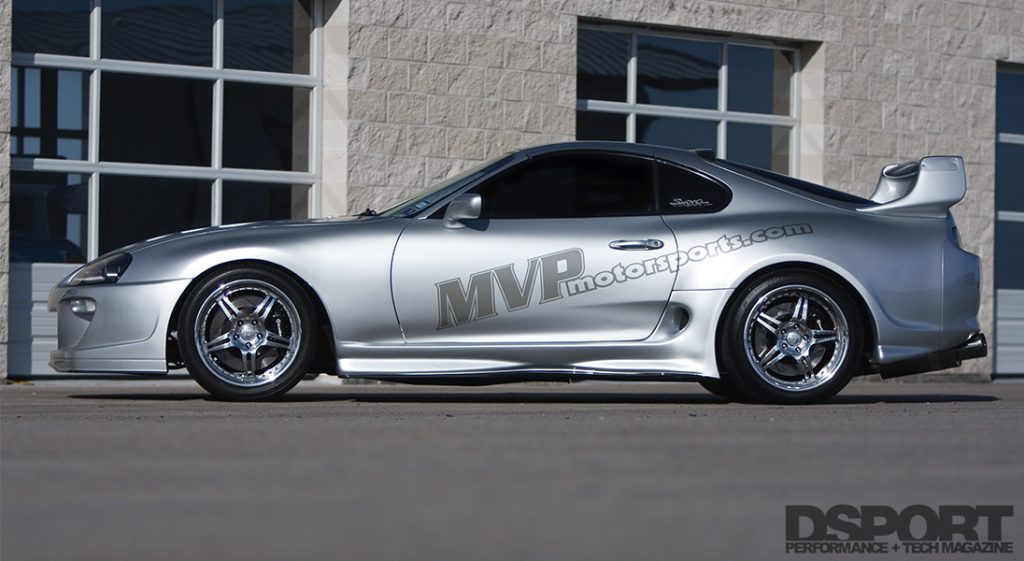 Supra In The 9s

While building a vehicle that rules the street was the objective, a trip to the strip is a must for all street cars that claim to be fast. Best of all, its safer and legal to go as fast as you can. Running on drag slicks and 116-octane leaded race fuel Dusty drove the Supra into the nine’s, collecting a 9.31 @ 152 MPH timeslip at San Antonio Raceway. Dusty comments, “I’ve clocked over 140,000 street miles on this car just commuting and running errands. Even after going through numerous body kits, wheels, gauges, engines and clutches, I’m happy with the outcome of my build. Would I do it again? Absolutely. This truly is a daily driver and a testament to the potential of the Supra.” Taking his worst defeat in stride enabled Dusty to return to the streets with a real MVP.