BUILDING PROJECT CARS IS RARELY A SMOOTH PROCESS, AS THERE ARE INEVITABLE BUMPS IN THE ROAD, unexpected errors and stages of the build that simply don’t go according to plan. Even well-thought-out builds can encounter hardships and adversity. But the reward for perseverance can make it all worth while. Mike Sullivan, the president of Mishimoto Automotive, wanted to build a “show stopper” for the 2008 SEMA Show. In his search for a suitable booth car, he found a JDM Nissan Silvia S13. Mike’s original plan was to build the car simply for show. This plan took a radical turn when Mike decided that this Silvia would also compete in both drift and time-attack events. Raising the goals of the build to a competition level pushed the project over budget and suddenly short of time. Even so, the project had to be completed before the SEMA Show. Text by Richard Fong // Photos by Michael Ferrara 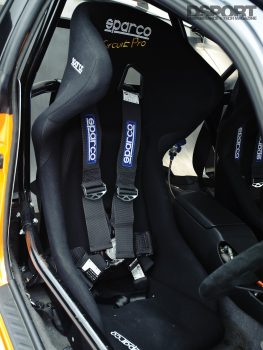 Mike recruited the assistance of Kenny Strickler at Turbochargers.com to get the ball rolling quickly. Kenny’s technicians stripped the S13 down to a bare shell and prepared the chassis for paint. While the prep work was being completed, an AutoPower 6-point cage was test fitted in the cabin. Since this chassis is a right-hand drive variant of the 240SX, the Autopower 240SX cage needed modification to fit the right-hand-drive chassis. Both the cross and diagonal bars under the hoop needed to be modified to fit the cage. 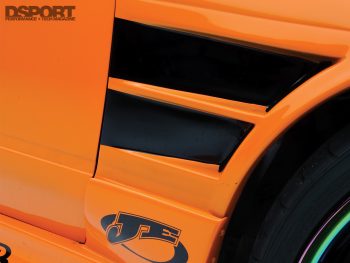 Seeking an aggressive Japanese aerodynamics package to allow for wider tires on aggressively-offset wheels, Mike selected components from Origin Lab. The Origin Lab front and rear bumpers blend seamlessly with the +40mm wide front fenders and the +50mm wide rear fenders. A Seibon vented hood completes the front-end aero tuning while APR Performance’s low-mount carbon-fiber wing finishes the rear. With the body tuning components in place, the shell received a few coats of BASF paint in Mishimoto’s trademark orange and black graphics scheme. Once the shell returned from the paint shop, the cabin was fitted with a pair of Sparco Circuit Pro race buckets and 6-point harnesses. The factory dash went back to its factory position, complemented by a custom carbon-fiber center console that has been cut to accommodate the Ksport hydraulic handbrake assembly. A set of AEM gauges mount neatly to an aluminum switch panel that accents the center console.

The SR20DET engine was removed during the exterior build to be upgraded for significant power increases. Late Model Engines (LME) began by boring out the sleeves to 87mm in preparation for the 8.5:1 compression JE Pistons and Total Seal piston rings. The JE Pistons join the 91mm stroke BC Brian Crower (BC) 4340 billet-steel crankshaft by way of BC forged-steel connecting rods. The crankshaft and connecting rods rely on Clevite bearings to ensure proper bearing tolerance. The stroked-and-poked rotating assembly results in a new displacement of 2,164cc. 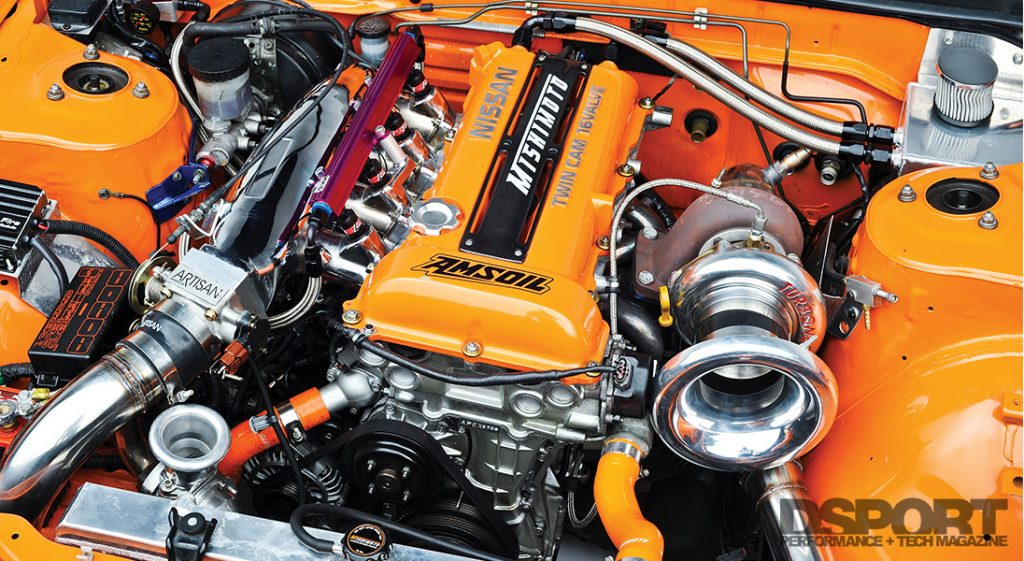 Since the shortblock was capable of moving more air, upgrading the top end was essential. While the SR20 engine is factory equipped with self-adjusting hydraulic lifters for maintenance-free valve adjustment, there is a sacrifice. These hydraulic lifters can limit high-rpm operation. To address this obstacle, TOMEI POWERED solid lifters replaced the factory hydraulic units to enable the use of higher-lift, solid-lifter camshafts. The bumpsticks selected were a pair of BC 272-degree solid-lifter camshafts. These cams are ground to work with the BC dual valve springs and titanium retainers that prevent the valves from floating up to the 9,500 RPM redline. The increased lift and extended duration of these cams allow increased flow in and out of the cylinders. The result is more power at a given boost pressure. To properly position the power curve, HKS adjustable camshaft gears permit even greater fine tuning of the valvetrain timing. Since high horsepower levels require high cylinder pressures, ARP head studs and an A’PEXi head gasket were chosen to provide a good seal. 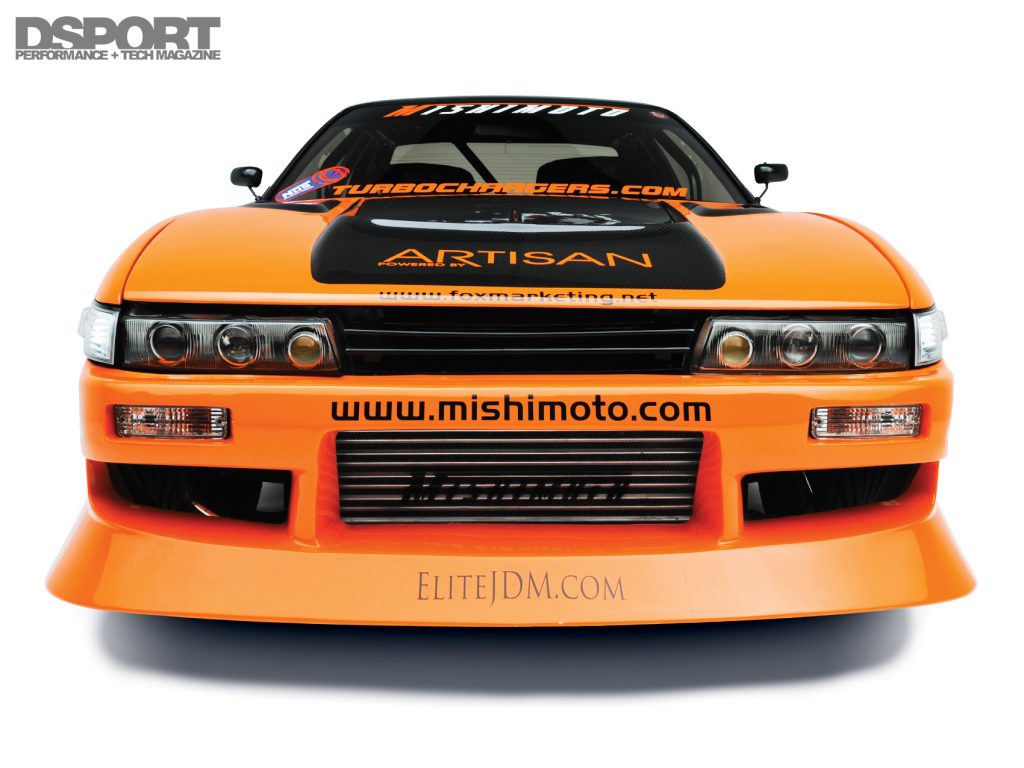 Super Snail With A Nitrous Chill

With the SR20DET longblock reinforced and ready to make serious horsepower, big boost pressure would be essential to achieve big power. To supply the boost pressure needed, a Turbonetics GT-K 650 turbocharger was selected for the task. The turbocharger was mated to the SR20 cylinder head by way of an Artisan top-mount stainless-steel exhaust manifold. Spent gasses leave the turbine housing by way of a custom downpipe and Artisan exhaust system. The GT-K compressor housing mates to custom intercooler piping that joins up with the Mishimoto M Line intercooler. As a supplement, a NOS nitrous-oxide intercooler spray bar was added to drop intercooler temperatures quickly and at the press of a button. Pre-plumbed for fuel, the NOS system is also ready for a single fogger upgrade in the future. Custom hard pipes connect the intercooler to the Artisan throttle body and intake manifold. The Nissan factory intake manifold relied on side-feed injectors for fuel delivery; however, the Artisan manifold uses readily-available top-feed injectors. A set of 810 cc/min Deatchwerks fuel injectors mount to the intake manifold and receive premium pump gas by way of dual Walbro 255-lph fuel pumps and an HKS fuel rail. Once the atomized fuel reaches the combustion chamber, NGK spark plugs ignite the air and fuel mixture. The plugs receive spark energy from an AEM CDI ignition amplifier, while an AEM Engine Management System coordinates fuel delivery and spark timing. With an Artisan manual boost controller maintaining boost pressure at 28 psi, the Silvia was strapped to a Mustang dynamometer. In the hands of Turbochargers.com’s tuner, the fuel and ignition tables were optimized and the Silvia managed to spin the rollers to an incredible 558 horsepower and 387 lb-ft of torque. Compared to the SR20’s baseline of 175 horsepower on this dyno, the modifications more than tripled the original power.

Under the fierce pressure of competition, high-powered SR20 engines run notoriously hot. Therefore, a number of measures were taken to protect the engine from overheating. As the primary point of heat rejection, a higher- capacity Mishimoto aluminum radiator makes the connection to the block by way of Mishimoto silicone radiator hoses. The Mishimoto radiator offers increased fluid capacity and heat rejection over the factory unit. In addition to the radiator, Mishimoto transmission and oil coolers further assist with temperature regulation to defend against heat-related failures. These insurance measures will prove their worth in competition. 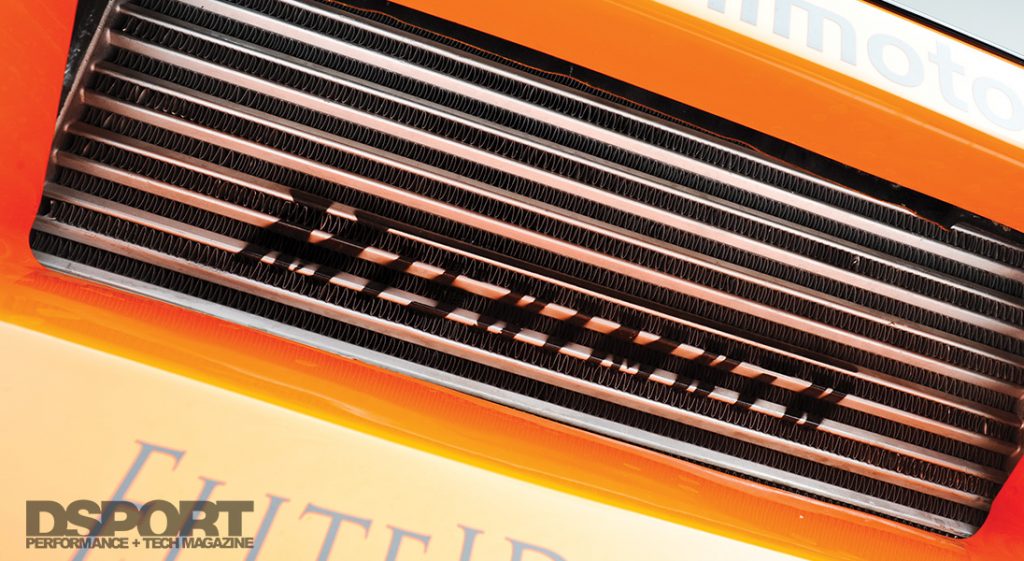 With the powerplant complete, attention turned to harnessing the horsepower under the hood. Although the factory clutch and flywheel combination work well on the stock SR20 engine, it was simply not engineered for horsepower increases of this magnitude. The search for a solution concluded with a Competition Clutch Twin Disk clutch and aluminum flywheel. The new clutch transfers power through a factory 5-speed gearbox before being divided between the drive wheels by a KAAZ 2-way limited-slip differential. The differential turns aggressively offset König Afterburner wheels mounted with Toyo T1R tires in a 235/35R19 offering in the front and 265/30R19 in the rear. 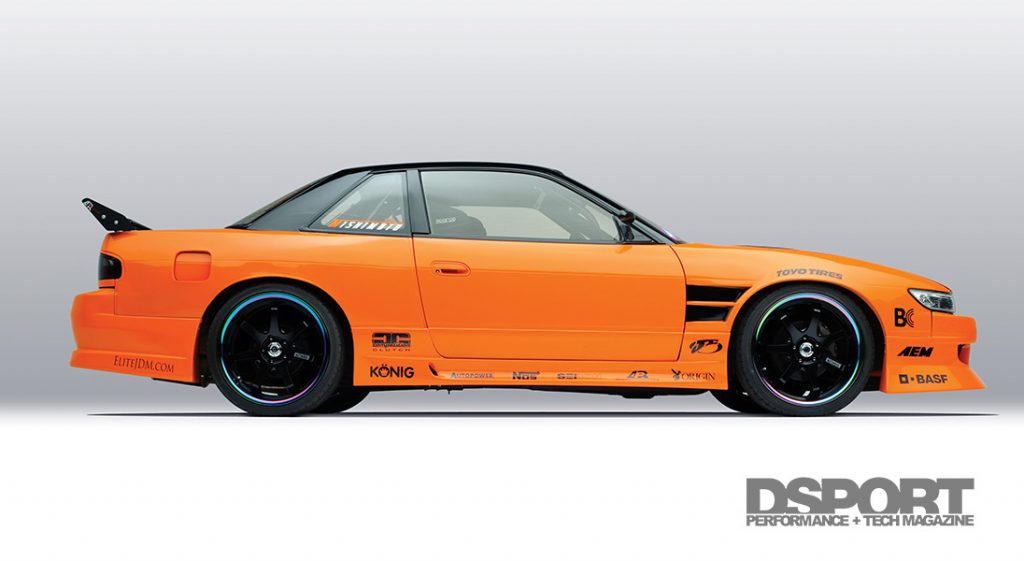 While the Silvia’s wheelwells were full, the stance was too high. Upgrading to a coil-over suspension was a must. Mike selected TEIN FLEX coilovers to drop the ride height and lower the center of gravity. The suspension also ensures that the wider contact patch of the big tires stays planted. With power, aero and suspension upgrades completed, braking was the next area to address. A set of factory Nissan 300ZX four-piston calipers with larger rotors replaced the stock single-piston sliding calipers up front. Anticipating drifting competition as well, the factory hand brake was retired in favor of a Ksport hydraulic hand brake. Since the sport of drifting relies heavily on the hand brake to initiate a drift, the hydraulic hand brake was a logical upgrade. Not only would it apply rear brake pressure with less effort, it would also eliminate the problem of stretched hand brake cables. 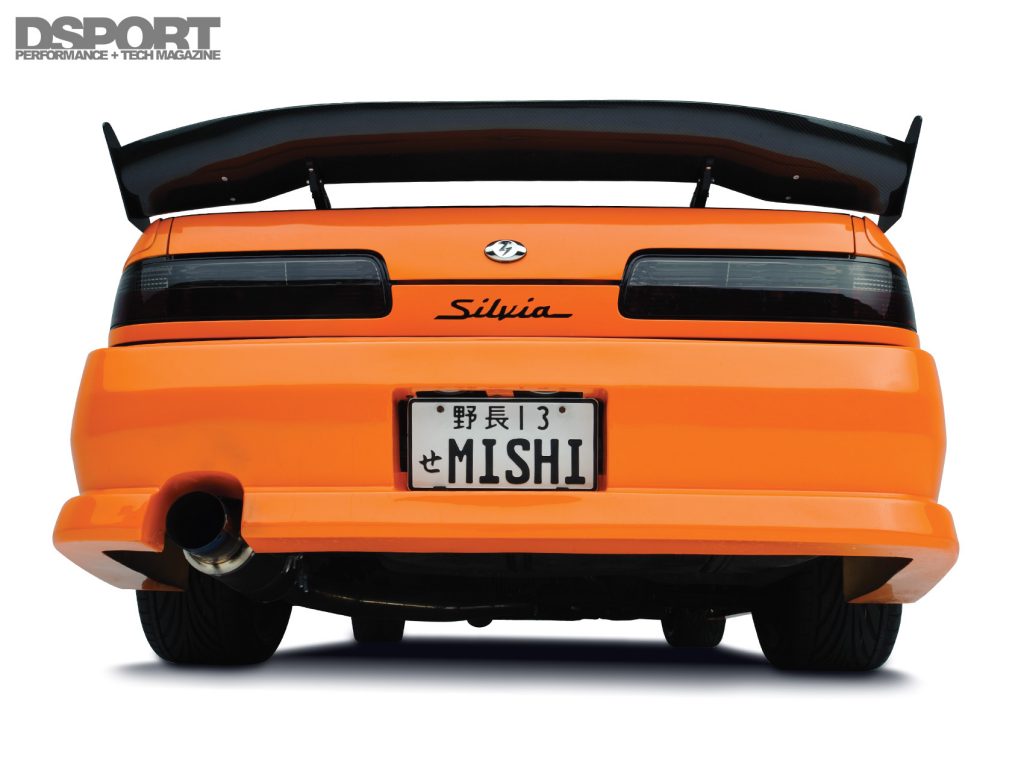 Finished just in time for the 2008 SEMA Show in Las Vegas, NV, Mike could finally breathe a sigh of relief. The Silvia drew plenty of attention at the show, providing the exposure that Mike was hoping. Soon, we will see if the additional work, effort and investment to make this Silvia a competitor will pay off. Mike and Mishimoto Automotive intend to compete with the S13 when the Redline Time Attack series hits the East Coast. If time permits for some further suspension tuning and track time to properly setup the vehicle, the right driver may be able to put this S13 on the podium. Stay tuned.