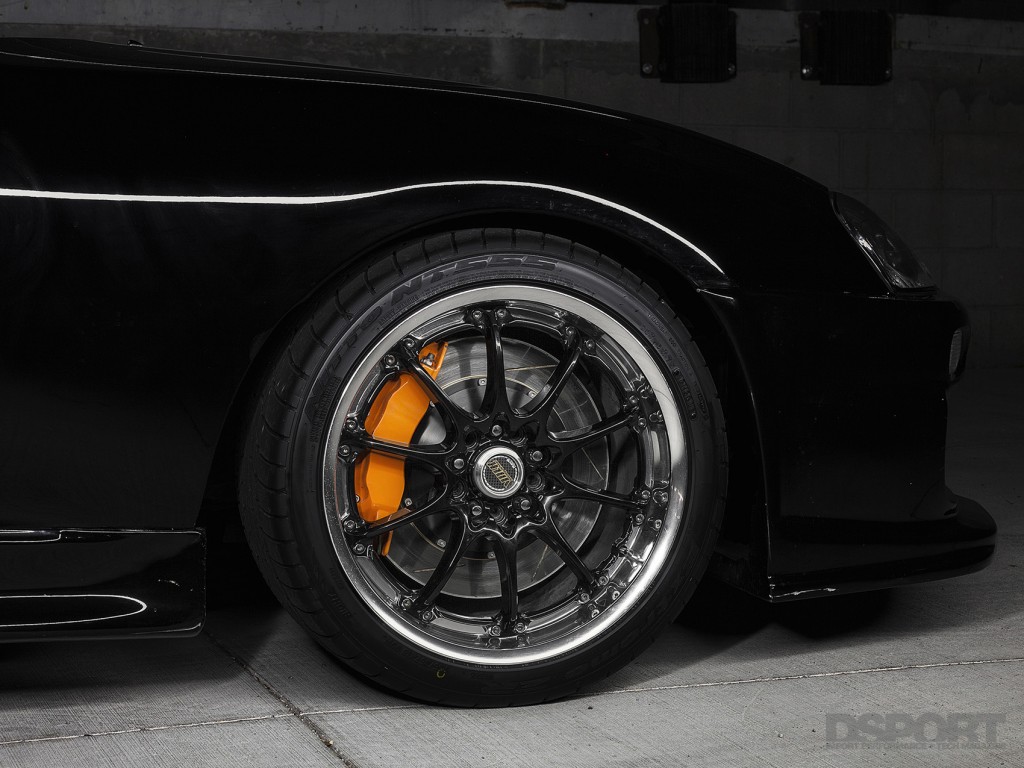 Street Supra Setting up the Supra for the street was an essential part of the plan; thus a mixture of handling, control and appearance needed to be addressed. To this end, KW’s V3 adjustable coil-over dampers were added, lowering the chassis just enough to close the gap between the wheel arches and the Volk GT-N wheels mounted with Nitto 555 tires. To force the Nittos to bite into the asphalt and to shed speed, the brake system was upgraded with a StopTech big brake kit at all four corners. The Lamborghini orange calipers can be seen peeking through the spokes of the GT-Ns. Finally, for an aesthetic touch, a combination of TRD and Do-Luck aero components add width and style to the Supra’s timeless bodylines.

[pullquote]WITH THE RIGHT COMBINATION OF PARTS, THIS PLATFORM CAN BE SET UP TO DO IT ALL[/pullquote]Nearly seven months went by while the Supra progressively came together. At this point, Okawa hadn’t even driven the car when Insane Speed asked a favor of him. He recalled, “When the build was completed, Insane Speed asked if the car could be used for a quick demo ride. For all their effort, I didn’t see any harm in allowing them to take a customer for a quick spin. This customer turned out to be boxing legend Roy Jones Jr., who was kind enough to autograph my radiator diversion panel.” As Insane Speed finishes up a few custom touches before shipping the car to Hawaii, Okawa beams with pride and anticipation. He concluded, “What sets the Supra apart from other cars is that with the right combination of parts, this platform can be set up to do it all. It can make amazing amounts of reliable power, handle amazingly well with an acceptable ride quality, brake as well as any performance car, and it can still be comfortable enough for daily driving.” “When that medical emergency came up,” Okawa admits, “I didn’t hesitate to let go of my first Supra. But I often wondered if I would ever get the chance to build another one to that same caliber. I am so grateful for having the chance to build this car and to build it the right way. It is everything I could have hoped or asked for, and it feels really good to be a part of the Supra community once again.” While second chances don’t always present themselves, Okawa got his second Supra and his second feature in DSPORT at the same time.
Pages: 1 2 3 4
On March 6, 2014