THE UNDERDOG. THE UNDERFUNDED. THE “LIVING ON CREDIT BECAUSE I’M between jobs.” Such is the plight of average Joes everywhere that are bitten by the racing bug. When Daniel O’Donnell was first exposed to time trial competition, he was instantly hooked but his daily-driven EM1 Honda Civic Si and supercharged BMW M3 would require more than he could justify or afford to be a competitive racer. 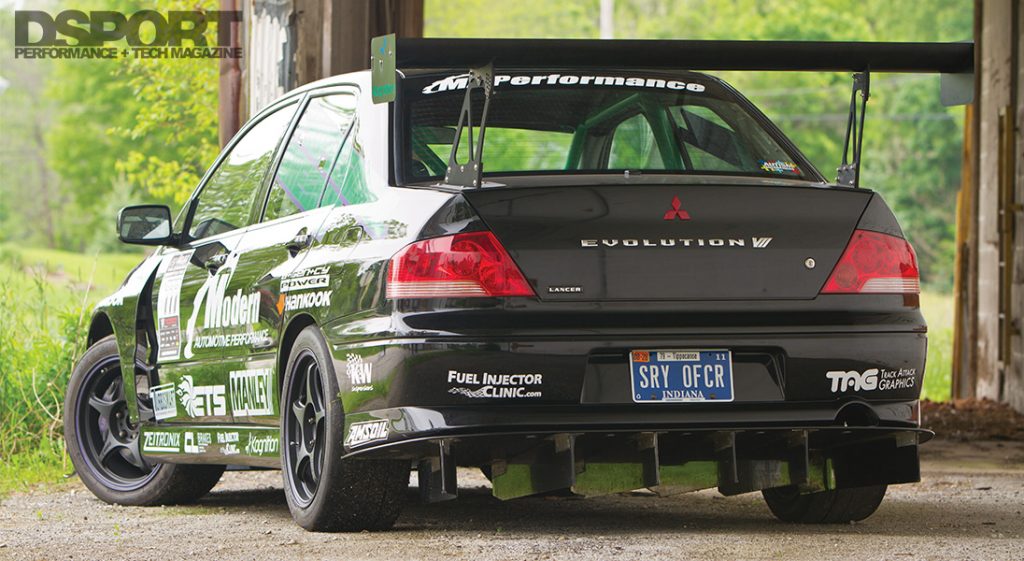 In his quest to stand out from the norm, O’Donnell’s search for a new vehicle had him searching high and low.“I always have to have something different, which had me looking for a Tommi Makinen edition EVO VI. After a long and unsuccessful effort, I managed to find this EVO VII. It turned out to be the perfect choice because many of the parts carry over from the USDM EVO VIII and IX. This made upgrading, maintaining and repairing the platform easier as vast resources supporting the EVO already existed in America.”

Having a dedicated project car in the stables wasn’t possible, so O’Donnell had to sell both the Civic and the M3 to finance the EVO VII RS-II. With only one vehicle for both competition and commuting, O’Donnell intended the EVO to serve double duty and began modifications to the daily-driven racecar. However, after being completely outclassed at a time attack event, O’Donnell set out to convert the EVO to an all-out competition vehicle. 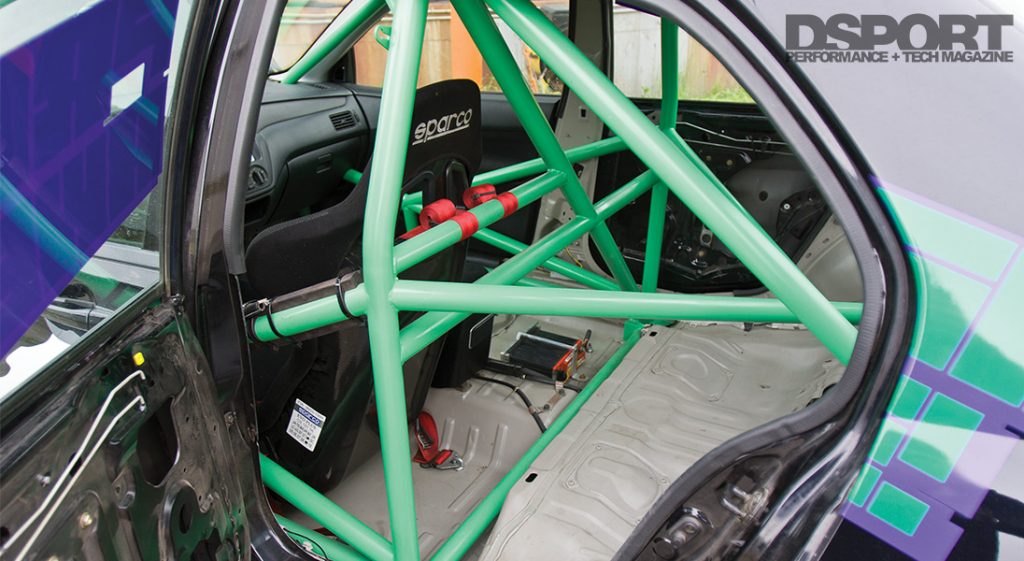 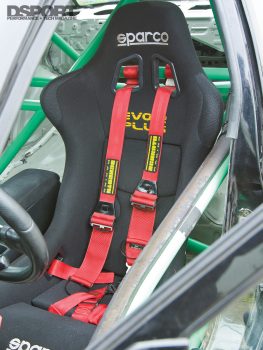 O’Donnell recruited some friends to help him take the EVO to a competitive level. In the three-car garage of a townhouse, Grant Davis and Mike Lewin joined O’Donnell each day after work to plan and execute the build. Starting with the chassis, an SFI-spec Cartel Chassis roll cage was welded into place, adding stiffness and protection for O’Donnell. The spartan interior retains the factory dash fitted with an AIM Sports MXL Pista Display, Zeitronix ZT2 Wideband, EGT and Ethanol Content Analyzer. The remainder of the interior includes the center console, armrest and front door panels to satisfy the minimum requirements for street class competition. To secure O’Donnell behind the wheel, a Sparco EVO II Plus seat and Schroth 6-point harness replaced the stock units on the driver’s side. A fire extinguisher sits shotgun on the passenger floorboard.

Fine-grained control over vehicle handling is essential in road racing. For the EVO, a set of KW Suspension Competition 2-way adjustable coilovers was called to action. Front and rear spring rates are dialed in at 14 kgf/mm and 10 kgf/mm respectively to suspend the chassis and work with the Cusco sway bars to make handling more predictable. Whiteline’s roll-center and steering precision kits were installed to settle the chassis and help maintain front suspension geometry. In the rear, the factory control arms were replaced with Agency Power adjustable units to further optimize alignment on the track. 5Zigen FN01R-C wheels wrapped in Hankook R-S3 rubber provide the EVO’s rolling stock and grip. 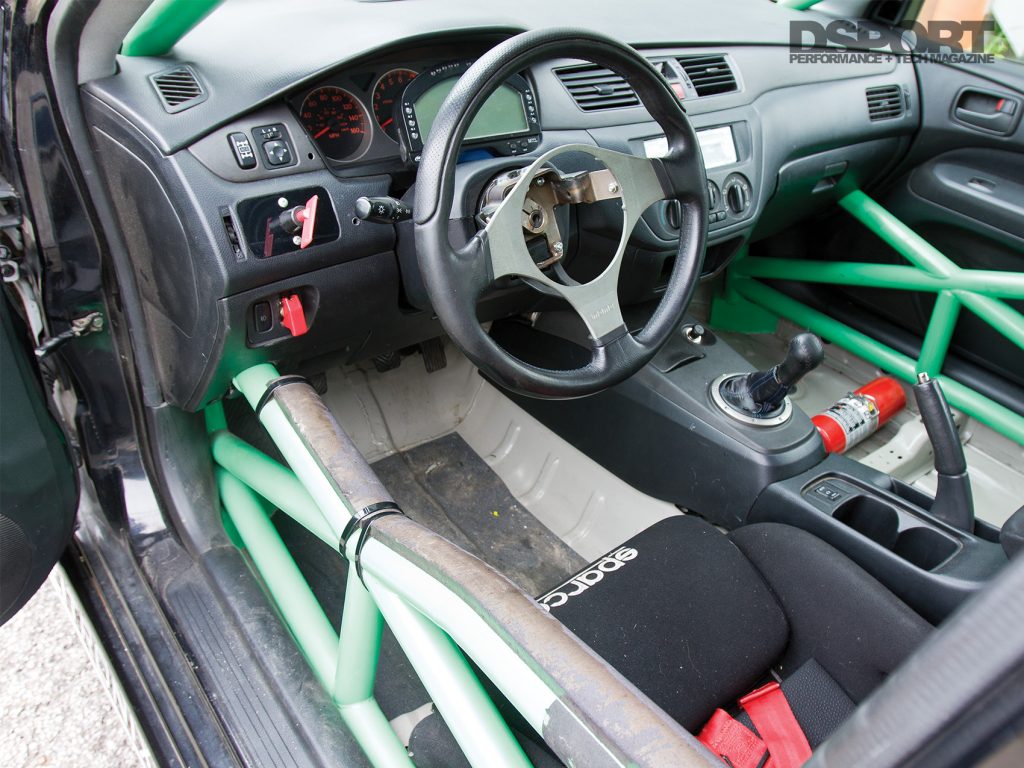 One of the inherent traits of an all-wheel drive chassis is understeer. Changes to the suspension certainly help with handling, but Mitsubishi took it a step further. The EVO VII RS-II came factory equipped with a torque sensing limitedslip differential up front, an active (electronically controlled) center differential and an Active Yaw Control (AYC) rear differential. The AYC system helps to neutralize the EVO’s handling, increase cornering speed and improve chassis rotation in the turns. While Mitsubishi equipped the RS-II model with Active Yaw Control for improved cornering speeds, the crew elected to upgrade to the newer Super Active Yaw Control system from an EVO X. Featuring the latest software and electronic hardware to manage the torque split to the wheels, the Super AYC differential also features a more robust planetary gear system design.

When employing a wider tire and wheel combination to widen the track or increase the front-end grip, sometimes the wheels extend beyond the factory fenders, prompting the use of wide fenders. In order to relieve the pocket of air pressure built up behind the tire in the wheel well, a vented or offset fender is used. 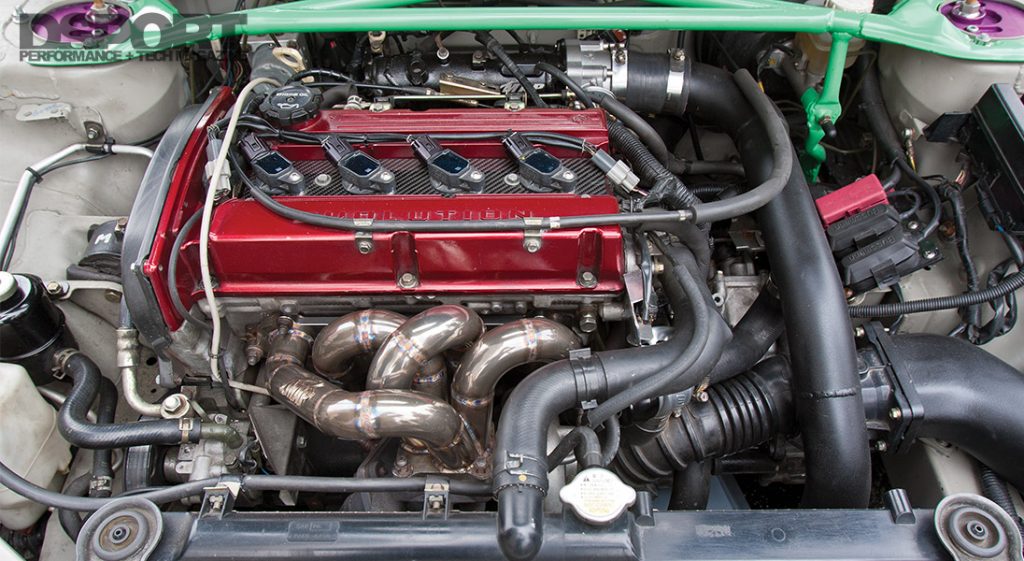 Truly competitive track racers know that increased engine output is equally as important as improved handling capability. Mitsubishi’s iron-block 4G63 has a well-established reputation and has proven more than capable of making power but to generate extra torque in the low-to-mid range engine speeds, increasing the displacement was a must. A 4G64 block was sourced and sent to Modern Automotive Performance (MAP) to be assembled. MAP’s machine shop overbored the cylinders 0.5mm before dropping in 10.5-to-1 compression Manley Platinum series pistons. Manley Turbo-Tuff connecting rods join the pistons to the Manley billet steel crankshaft. Once assembled, the new block displaced 2,378cc, an increase of 380cc over the stock engine. 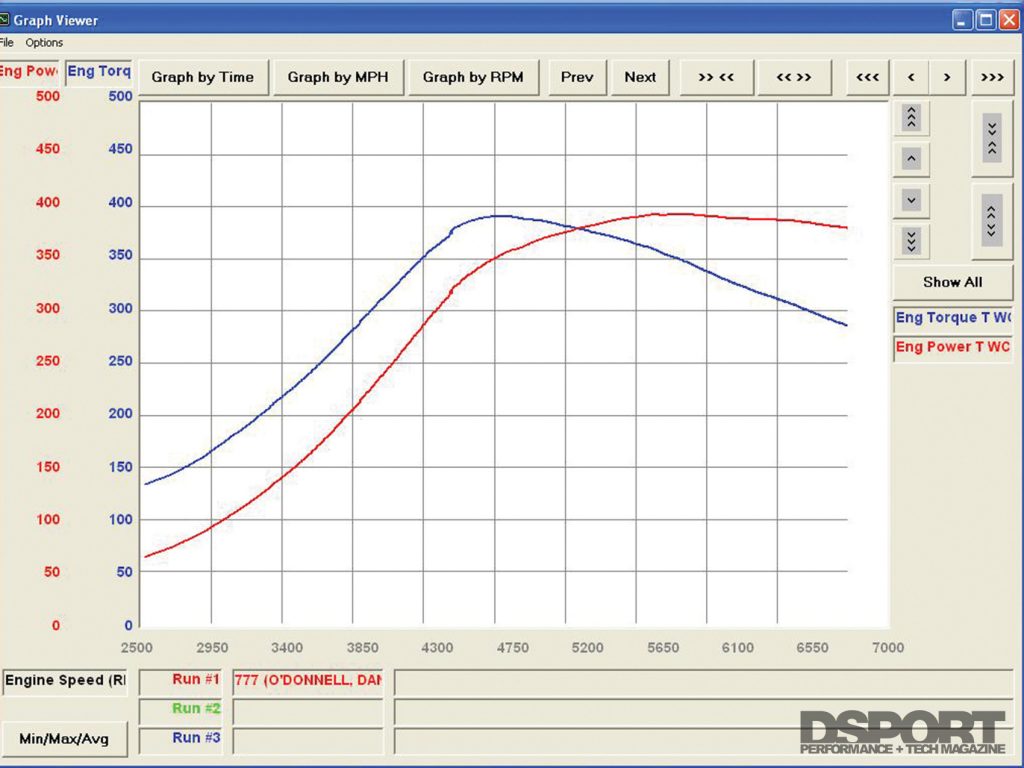 The cylinder head was put through MAP’s CNC cylinder head program before being fitted with Manley Pro Series valves, springs and titanium retainers. To lift the valves, a pair of BC Brian Crower 272-degree camshafts takes its place atop the valvetrain. To ensure a positive seal, a Power Enterprise head gasket was crushed between the head and the block by way of MAP Ultimate Duty head studs, completing the longblock assembly. 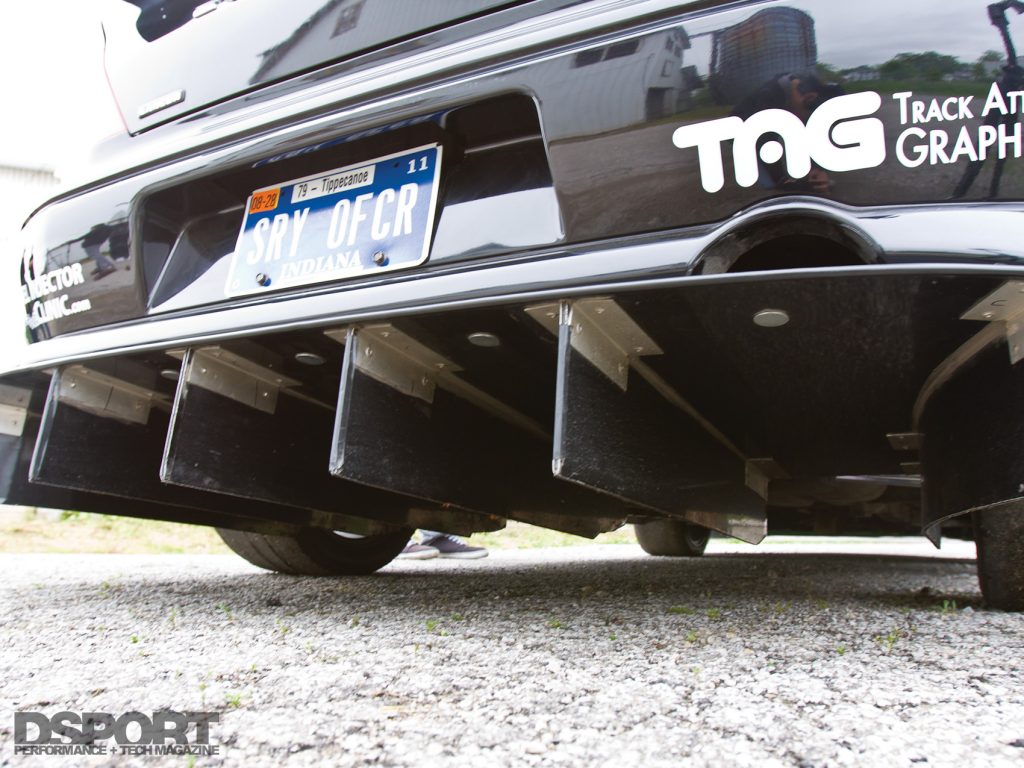 Diffusers help to smooth the flow of air coming out from under the chassis at the rear. This aids in generating down force and improving aerodynamics. The Professional Awesome crew designed and built its one-off diffuser from analysis of DTM, Le Mans, Super GT and even NASCAR and F1 designs. 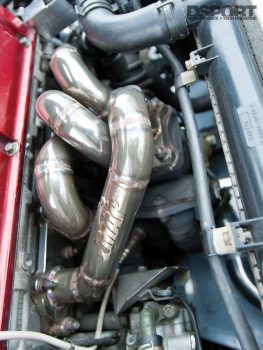 Bigger is not always better, especially in the case of a road racer that needs a responsive turbocharger to begin pressurizing the cylinders at lower engine speeds. MAP’s proprietary 16G turbocharger was chosen for the duty. Exhaust gasses channeled through a MAP long-tube exhaust manifold spin the 16G’s undisclosed-specification turbine wheel to produce boost pressure. The compressed aircharge then flows through an Extreme Turbo Systems intercooler to exchange heat with the atmosphere before entering a Full Blown 70mm throttle body and MAP Rev3- modified intake manifold.

Race gas At The Pump

As the intake charge is divided between the cylinders, Fuel Injector Clinic 2,150cc/min injectors spray E85 into the combustion chambers. To keep the hungry injectors satisfied, a Bosch 044 fuel pump works with a MAP fuel surge tank to ensure an uninterrupted supply of fuel. Since the enormous injectors far exceed the factory units’ capacity, a combination of open source tuning software was employed to tune the fuel and ignition tables. With the chassis strapped to the rollers of Komet Motorsports AWD Mustang Dynamometer, O’Donnell began optimizing the maps for the 34 psi peak boost pressure being regulated by the Turbosmart Comp-Gate 40 wastegate. The final output was 389 horsepower and 404 lb-ft torque to the wheels. For comparison, a stock EVO VIII on this same dyno generates around 220 horsepower, an improvement of 76 percent horsepower over stock. 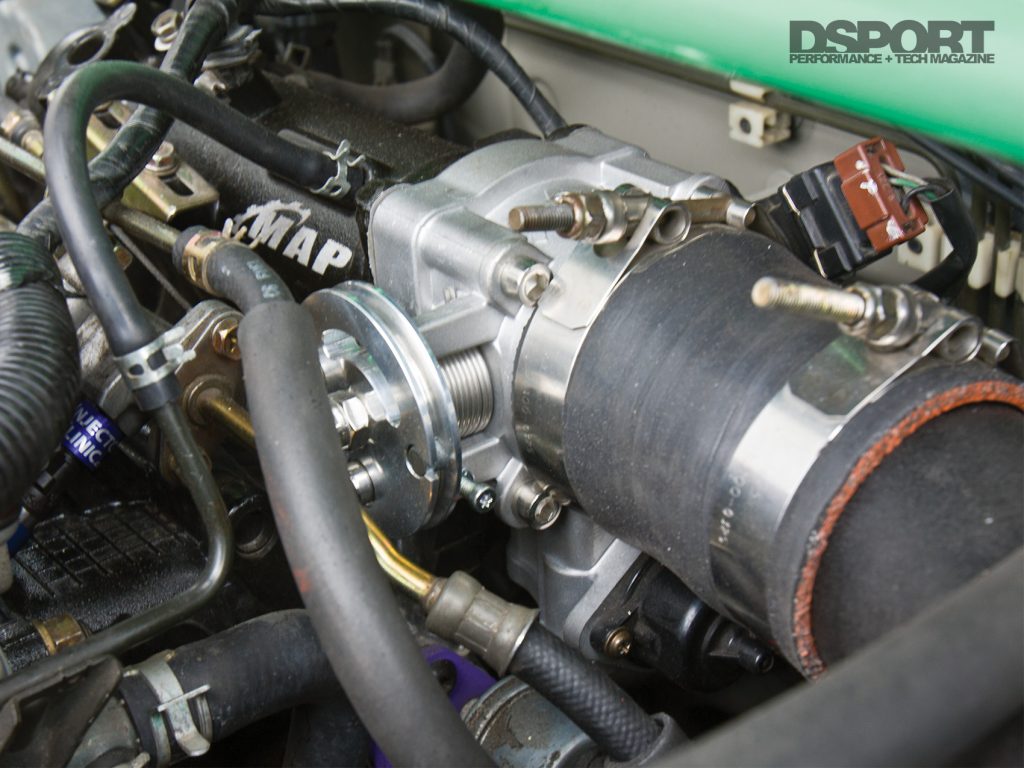 When O’Donnell and his crew of three concentrated their collective efforts into a winning team, three of the four were unemployed in 2010. “When we started our team, ‘Professional Awesome!’ in 2009, we didn’t think that so many of us would be looking for work in 2010. Fortunately, support from our sponsors and the obvious free time made it possible for us to really focus on the vehicle build. This is reflected in our performance in 2010, as we captured podiums at Redline Time Attack events and set the street class records at Auto Club Speedway, Sebring International and Autobahn Country Club in the process. In the Global Time Attack series, we established class records at New Jersey Motorsports Park, Infineon and we broke our 2010 record at Autobahn too. For 2012, we’ve already set one new record at Road Atlanta, and we’re looking forward to the remaining events for 2012.” Watch for O’Donnell and his awesome EVO as they zero in on more class records throughout the season. 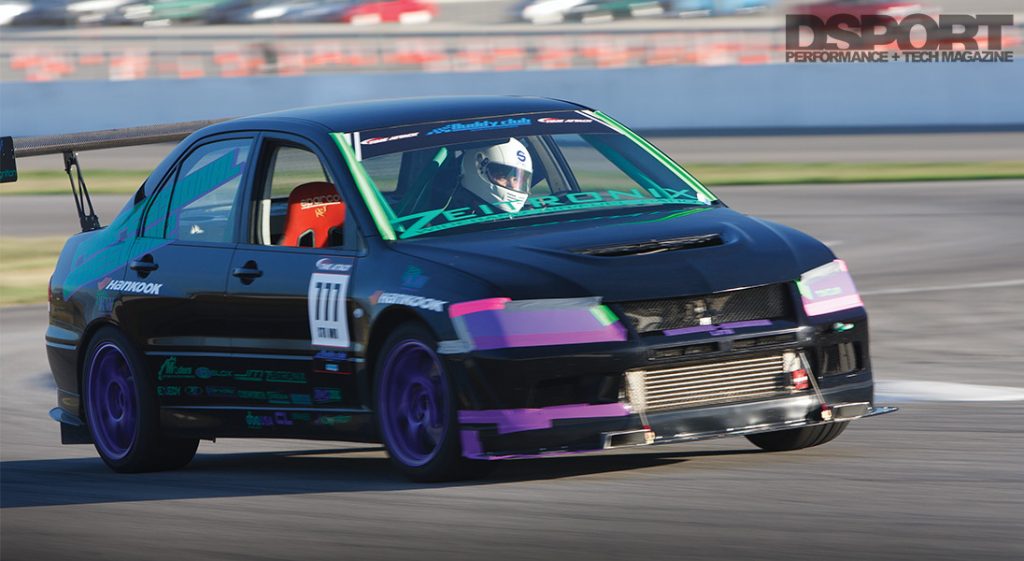