THE RELATIONSHIP BETWEEN THE MANUFACTURERS and the tuners has evolved with the incredible growth seen in the aftermarket tuning segment. In years past, enthusiasts and tuners would anxiously wait for secretive new platforms to be released, and then begin prototyping and testing once they were able to acquire one. Fast forward to today, and one will notice that marketing strategies have radically changed. While the launching of new platforms still warrants a veil of secrecy, Mitsubishi has stepped up with outside-the-box planning. Prior to the release of the Lancer Evolution X, details and specifications remained vague. But Mitsubishi strategically provided the top tuning shops and aftermarket manufacturers with engine components, white papers and specifications regarding the newly designed 4B11 engine and the CZ4A chassis. This “head start” facilitated the research and development process for aftermarket support of the new EVO X. Within a year of its release, a myriad of components were already available for the EVO X. By Richard Fong // Photos by Michael Ferrara 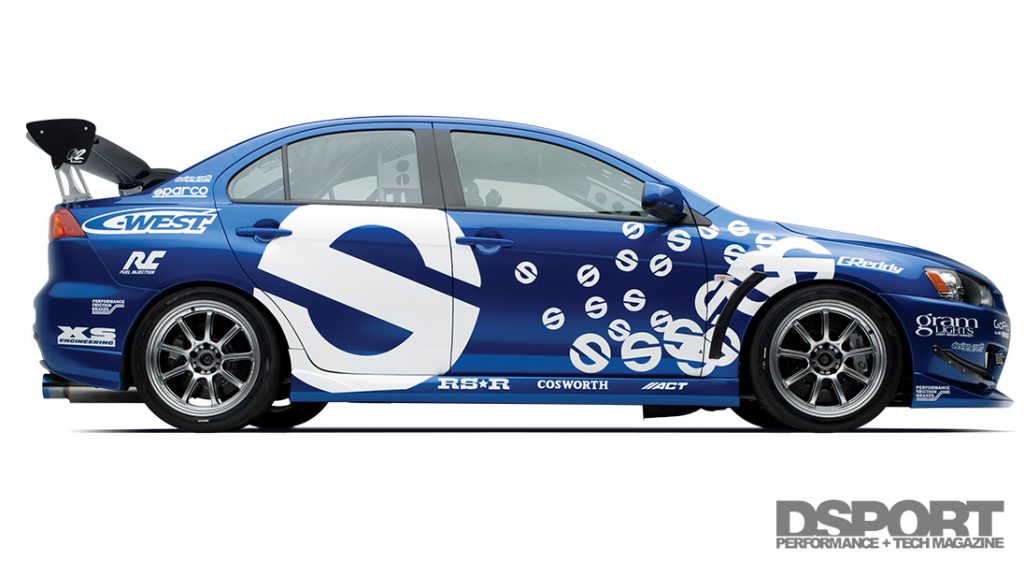 One of the cutting-edge tuners that received not only a preview but a full-fledged project platform was Design Craft Fabrications (DCF). DCF started as a garage project between friends and before long, the shop grew into a respected authority for fabrication and performance design. Gary Castillo leads the DCF team. Gary’s reputation as a fabricator has elevated Design Craft’s status which caught the attention of Mitsubishi Motors North America. Assigned the task of making the EVO X into a track contender, DCF went straight to work on the new CZ4A chassis. 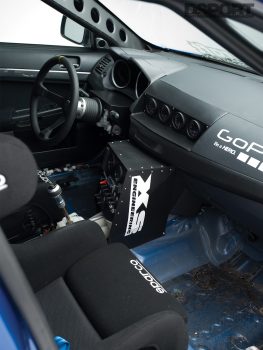 To start, the interior was stripped to lighten the load before being outfitted with a DCF custom 8-point cage. The cage not only provides a degree of safety for the occupants but also acts as a chassis-stiffening device. With the cage in place, a pair of Sparco Pro race buckets and 6- point harnesses were bolted in to hold the driver and passenger securely in place. A Sparco steering wheel replaced the factory unit at the top of the steering column while a bank of GReddy SMI gauges on the dash and in the center-console switch panel relay engine data to the driver. Delivered to DCF in Octane Blue Pearl, the team decided to leave the color intact while enhancing the aerodynamics with body components by C-West. The full aero kit included front and rear bumpers, front fenders, side skirts, front grill and carbon-fiber GT wing. To contrast against a field of blue, racing graphics composed of flying “S’s” in white vinyl complete the exterior adornments. Hidden within the air dam and the unused exhaust-tip cutout in the rear are GoPro Motorsports Hero wireless on-board video cameras. With 5-megapixels and a 170-degree wide-angle lens, the front and rear perspectives that these cameras offer will gather useful footage of each lap of the track. 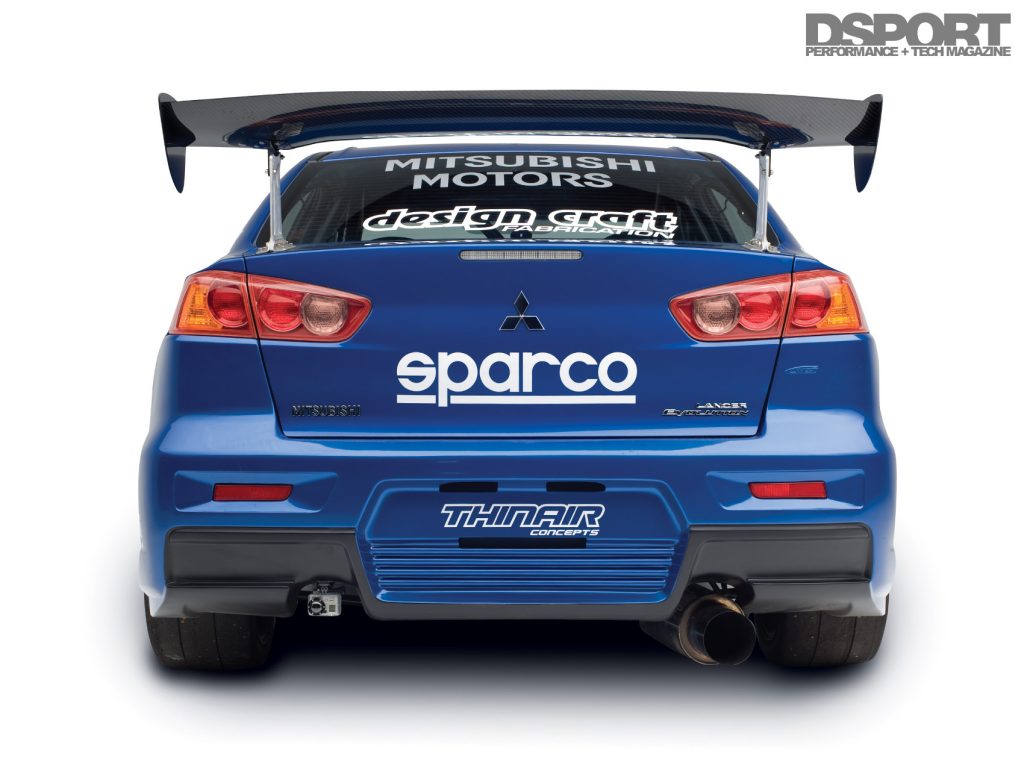 Sprung For The Track

In order to run any track like it is on rails, the EVO X needed refinement inside the wheel wells. To start, iShock 32-way adjustable dampers and RS*R springs drop the ride height and add flexibility to suspension tuning compared to the factory dampers and springs. The iShock dampers feature independent compression and rate of rebound dampening for precise tuning of the suspension. Additional stability is contributed by a set of Hotchkis front and rear sway bars. 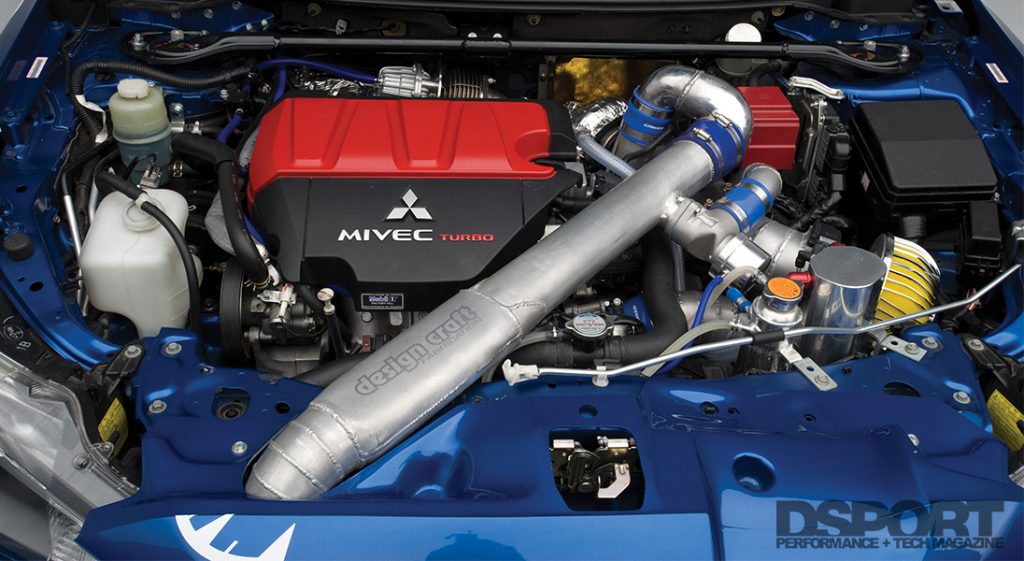 The all-aluminum block of the Mitsubishi 4B11 engine features an 86mm bore and an 86mm stroke. Because of development delays, DCF approached the engine build in two stages. The first stage involved maximizing the potential of the factory longblock. DCF chose a GReddy T67-25G 10cm2 turbocharger as the foundation for the first stage. DCF fabricated an equal-length stainless-steel manifold to position the turbo and channel exhaust gases to the turbine inlet. From the turbo outlet, the spent gases flow through a DCF-fabricated 100mm stainless-steel downpipe on the way to the GReddy Racing Ti-C exhaust system. On the compressor side, ambient air is drawn through a GReddy Airinx filter, compressed and then forced through DCF intercooler piping on the way to the GReddy five-row front-mount intercooler. Once the air has been chilled, the journey concludes at the factory throttle body and intake manifold. A Nippondenso 255-lph in-tank fuel pump supplies the VP Racing C16 race fuel to the factory injectors while Okada Projects Plasma Coils energize NGK spark plugs. Orchestration of the injector duty and spark timing remains in the hands of the factory ECU, thanks to the EcuTek tuning software. With the EVO strapped to XS Engineering’s AWD DTS dynamometer, the 4B11 maxed out at 390 horsepower. 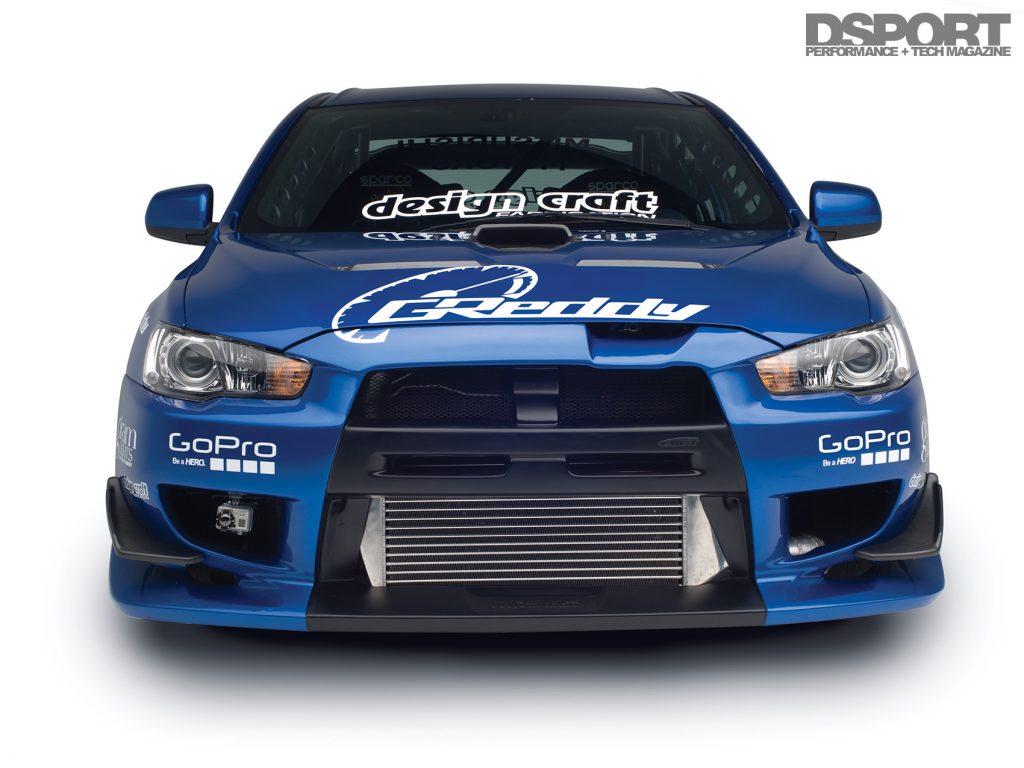 Having explored the limits of the factory setup, it was now time to move on to the second stage, a full engine build. This stage included the assistance of Cosworth Racing. Cosworth, whose reputation as an engine builder is known worldwide, received pre-production 4B11 engines from Mitsubishi in order to get a head start with research and development. With production pieces that had been developed, Cosworth technicians went to work on the engine. The engine was bored and honed before Cosworth 9.0:1 forged-aluminum pistons filled the cylinders. The pistons make the connection to the Cosworth billet- steel stroker crankshaft by way of Cosworth forged-steel H-beam connecting rods. The larger bore and longer stroke increase the displacement of the 4B11 engine to 2,236cc, a displacement increase of 12 percent. Attention now shifted to the cylinder head. Cosworth CNC-ported the head for improved flow before filling it with Cosworth valves, springs and titanium retainers. Cosworth 266-degree MX1 camshafts actuate the valvetrain. The longer duration and higher lift of the MX1 cams take best advantage of the increased flow of the freshly ported head. A Cosworth head gasket ensured a good seal between the head and the block as Cosworth head studs provide the clamping force to secure the longblock together. Anticipating greater horsepower figures, additional fuel was needed to keep the 4B11 pumping. A four-pack of RC Engineering 1,000 cc/min fuel injectors, Cosworth fuel rail and a SARD fuel pressure regulator supplement the fuel delivery system on the way to big power. Gary anticipates that after the engine is broken in, it should be capable of well over 500 wheel horsepower on race gas.

The Ten Relies On Four

With the engine build in place, the factory driveline components were beginning to show their fatigue. Rather than wait for failure, DCF elected to install an ACT heavy-duty clutch and flywheel to harness the crankshaft and transfer power to the transmission. Power is split between the rear wheels by way of a KAAZ limited-slip differential. Turning the power into traction and movement, the factory rolling stock was swapped out in favor of Gram Lights Optimize wheels in an 18×9.5-inch offering. DOT-legal gumballs help to bite into the asphalt while accelerating and braking. Seeking superior braking performance, DCF turned to Performance Friction Corporation for a solution. Performance Friction answered the call with a set of Z-Rated 4-piston calipers up front that squeeze 362mm two-piece rotors with Z-rated Carbon Metallic pads. In the rear, 2-piston Z-Rated calipers and 330mm rotors complete the braking system. 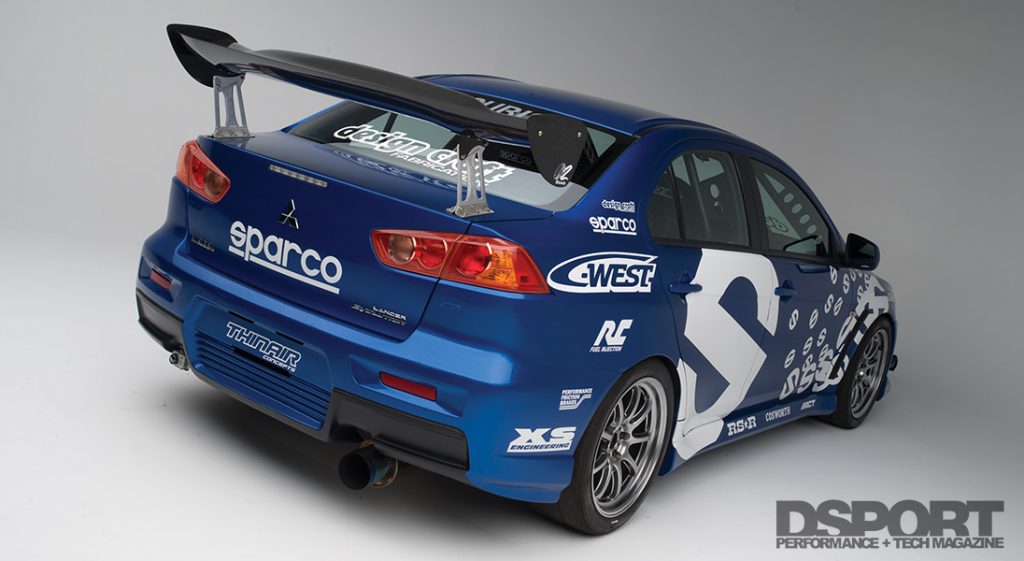 Pushing The Threshold Of Physics

As the Redline Time Attack season rapidly approaches, Mitsubishi and Design Craft Fabrication have their eyes set on the AWD class. In a field dominated by Subarus, EVO VIII’s and IX’s, DCF is coming armed with a track-prepped EVO X and over 500 horsepower under the hood. Watch for this EVO X in the chase for the title at Redline Time Attack events throughout 2009