Power, speed and no fear of defeat. This is the checklist of any warrior going into combat. Since its creation, VeilSide’s R-1 Street DRAG GT-R has faced challengers from around the world and none have been able to better this warrior on the quarter-mile clad in street trim. Bigger engines, more power and bigger bankrolls have not been able to dethrone this king of the street. Instead, the VeilSide R-1 has bettered all in the 1/4-mile confrontations and in challenges to be the quickest 0-300km/h street car in the world. 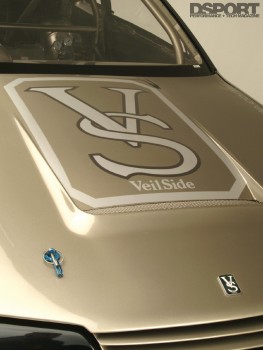 Here in the U.S., the “VeilSide” name conjures up images of some of the most aggressively styled and copied body kits in the world. Our country’s association of VeilSide to pure body styling is ironic when you consider the history of the company and its founder. In 1985, VeilSide’s founder and President Hironao Yokomaku established Yokomaku Racing in the eastern outskirts of Tokyo. Yokomaku Racing excelled at tuning engines for maximum drag racing performance. Five years later, Yokomaku would ask himself, “Is it enough for a car to be fast? Shouldn’t the car be something more?” His answer was that both the styling of the vehicle and the engine could be tuned to perfection. Skilled with either a wrench or pen in hand, Yokomaku founded VeilSide in 1990. The company name being derived directly from the translation of Yokomaku’s name (“Maku” meaning “veil” and “Yoko” meaning “side”).

Getting down the quarter-mile in record time takes a stout combination of traction and power. For the traction part of the equation, Yokomaku chose this 1989 Nissan Skyline GT-R as the platform. The vehicle’s all-wheel-drive configuration would be paramount to providing the traction needed to run deep into the 8s on radial tires. As for power, Nissan’s RB26DETT 2.6-liter in-line six-cylinder engine would be asked to produce over 500-horsepower- per-liter on gasoline. This is an accomplishment that few engines and few tuners have ever accomplished.

Attention first turned to the R26DETT block. The block was fitted with VeilSide’s billet steel main caps and then line bored and line honed. This process ensured that the crankshaft would be dead-center straight and well supported by the seven main caps of the engine. The crankshaft selected for the task of transferring massive amounts of horsepower to the transmission was a HKS fully-counter- weighted billet crankshaft. With the crank in place attention turned to the pistons and rods. Into the freshly bored and honed cylinders, Yokomaku fitted a set of 87mm HKS forged pistons and rings hung on VeilSide titanium connecting rods. To supply an adequate supply of oil to the main and rod bearings, a NISMO N1 high- performance oil pump was called into action. With a capable short-block ready for action, the focus was now on the cylinder head. 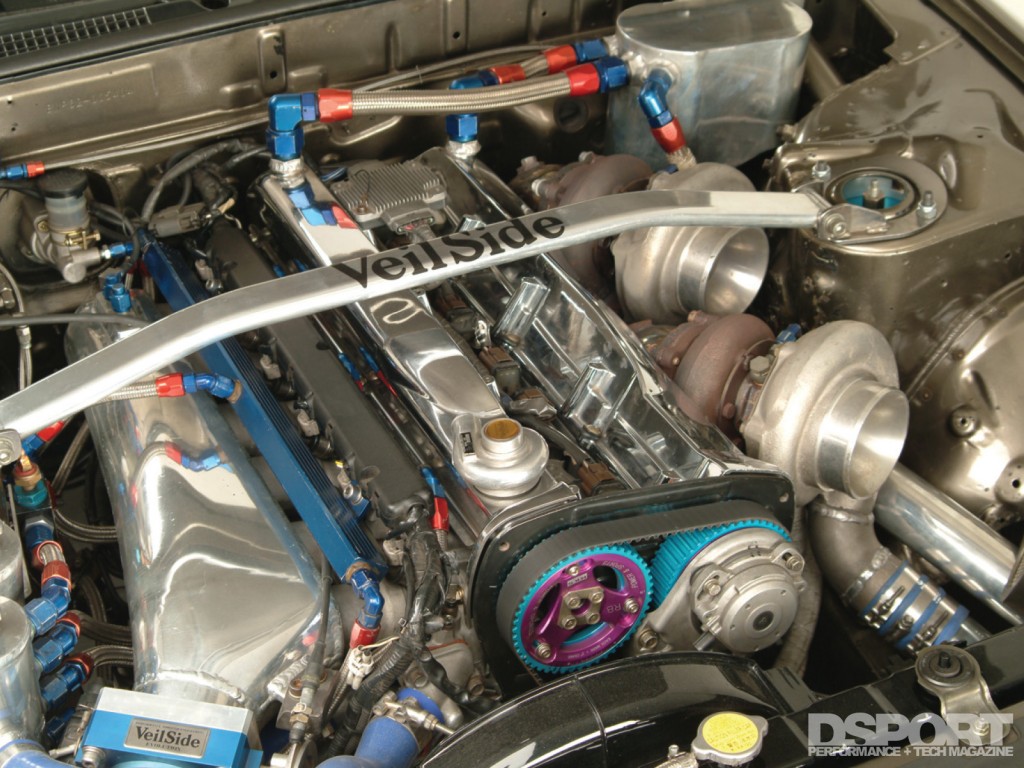 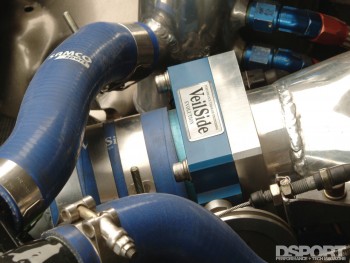 For this application, Yokomaku ported the cylinder head and fitted 1mm-oversized stainless valves into the head. VeilSide’s custom valve guides, valve springs and titanium retainers were matched to the VeilSide custom-ground camshafts. The camshafts feature an 11.6mm lift with 280 degrees of advertised intake and 290 degrees of advertised exhaust duration.

To channel the flow of air into the cylinder head, Yokomaku used a JUN intake manifold mated to a 100mm VeilSide single throttle body. Directing the hot exhaust gases out of the head, VeilSide crafted a set of tubular exhaust manifolds using 45mm (1.75-inch) stainless-steel tubing. Each of the manifolds is fed by three cylinders and each feeds a turbo and wastegate. Once the exhaust has turned the turbine wheels the spent flow is then channeled through a pair of 80mm exhaust pipes.