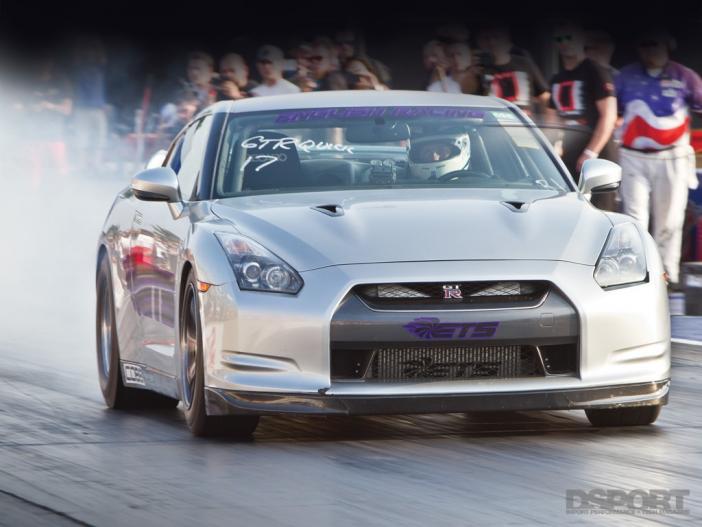 As the Max Effort class made its passes down the drag strip, several test and tune sessions were also conducted, preceding the first round of qualifying. DSM, EVO and GT-R fans who stuck around for the test and tune passes received a real treat that afternoon. They witnessed the world’s quickest GT-R of ETS/English Racing best its own previous world record with a new world record elapsed time of 7.806 seconds. To validate the pass, English Racing’s Lucas English ran another blistering pass at 7.858 seconds in the following session. 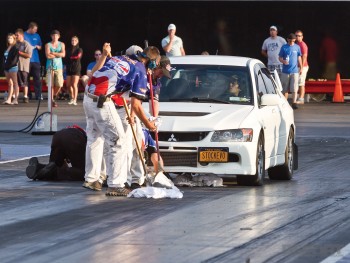 The anticipated precipitation finally arrived Saturday night and, by Sunday morning, left the track soaked. While the staff dried the track, a brief shower came down as the competitors began preparing for the last two qualifying sessions and the eliminations. Fortunately, the skies cleared afterwards and the track was dried and prepped. The drag races proceeded two hours behind schedule, but both remaining qualifying sessions were held as the various classes prepared for the eliminations. Several very time consuming oil/fluid downs delayed the action even further, but the racing action proceeded nonetheless. Pay attention racers, if your car fails, just pull over. Dripping fluid down the 1320 is a waste of time and effort for everyone involved. 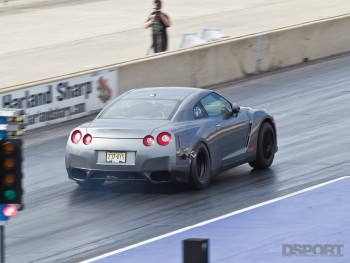 For this Shootout, Buschur Racing revised its class structure, presenting drivers with eight possible heads up classes to participate in. Two of the classes featured an enlarged qualifying field. The Street Eliminator class and the Quick Class increased to an unprecedented 32 qualifiers this year. The quick class was amazing, as there were ten (10) eight-second cars and fifteen (15) nine-second cars in the class. Unfortunately, the finals matchup between Aaron Gregory and Jesse Abele was a complete joke. These competitors (who both happened to be from Kentucky) ended up cruising down the 1320 in 33 seconds in order to “save” the cars and split the prize money. This was a major disappointment, as these guys had everyone wait in anticipation for them to return to the staging lanes, only to find out they were planning to make a half-hearted effort to go down the track. This is the second time Abele had made it to the finals against a friend or relative (the last time was at the 2011 Shootout against his brother, Nick), only to let the crowds, sponsors and event staff down by not making a legitimate, full-tilt pass. Trying to “save the cars”? Please, this is racing. 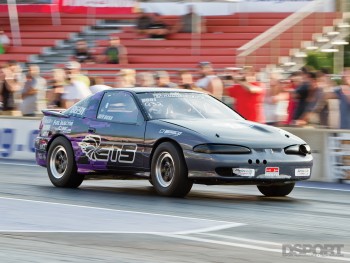 There were a number of contenders that seemed sure to dominate in their classes. Unfortunately, some of these top performers fell victim to failures and mishaps that are ultimately a part of racing. One of the greatest upsets occurred when English, who had been running consistently in the 7.8-second range throughout the weekend, suffered a launch control malfunction in the semi finals, getting off the line well behind Gideon Chamdi, who was the eventual winner of the GT-R Quick class. Kapral and the more powerful STM RS seemed poised to continue into the low eight-second realm until an accessory belt broke, got stuck in the timing belt and caused damage to the engine. This unfortunate event knocked him out of the Quick 32 in Round Three. The top qualifier in the Quick 32 and the only other seven-second racer, Kevin Jewer, also fell out of the running in Round Three, when he suffered a driveline failure. 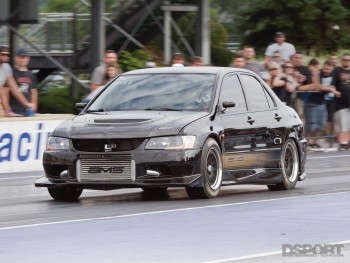 Once the track went cold at 8:30pm, the racers began packing up and preparing to head out. The Shootout keeps growing, with weekend attendance increasing to 5,383, while 240 racers packed the pits. There are talks about turning the event into a three-day racing affair, utilizing both sides of the track property to free up additional parking and vendor space. If you missed out this year or have never been, you won’t want to miss the 23rd Annual Buschur Shootout in August, 2015.
Pages: 1 2 3 4 5 6 7
On November 2, 2014

Headed by Michael T, (a trusted ambassador of American Honda and the past 3 Homecoming events), he delivered a gathering...