If you’re looking for a combination of adventure, thrill, fun, and culture exploration, this tour should be the first on your list. DSPORT Magazine started the new year off with another successful DSPORT Tokyo Auto Salon Tour. The journey was the ultimate experience for car-people, and even a few attendees that had little interest in cars considered it a once-in-a-lifetime experience. From the Nissan Heritage Museum, the Tokyo Auto Salon, to the heart-dropping DSPORT Tuner Challenge, where attendees received ride-alongs with D1 Grand Prix legends like Takahiro Ueno; this was a tour to remember. 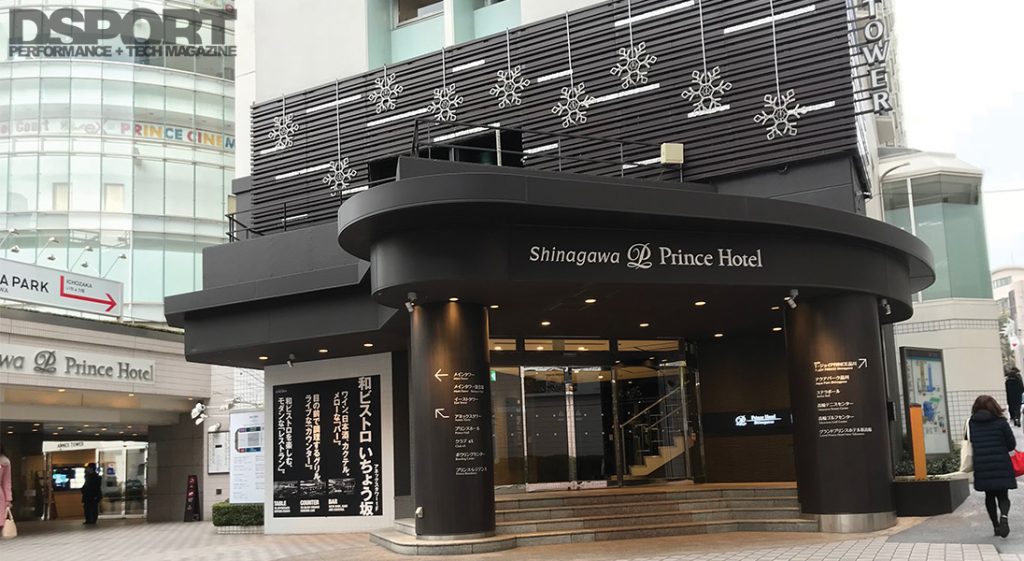 The Shinagawa Prince Hotel was our home for the eight days. Located across the street from one of the bigger train stations, adventures were only a few hundred feet away at all time.

After our direct flight to Tokyo, Japan, attendees gathered in the hotel lobby to start the trip right by exploring the food culture of Japan. The key was to beat the jet lag by staying up until 10:00 PM, and although it sounded like a challenge at first, the never-ending fun made it difficult to even think about sleep. Everyone received their WIFIs, and before you know it, the city of Tokyo was in everyone’s pockets. Attendees and DSPORT staff hit it off within minutes of meeting each other and Japan was quickly swarmed by adventure-hungry people looking to learn about this great country. 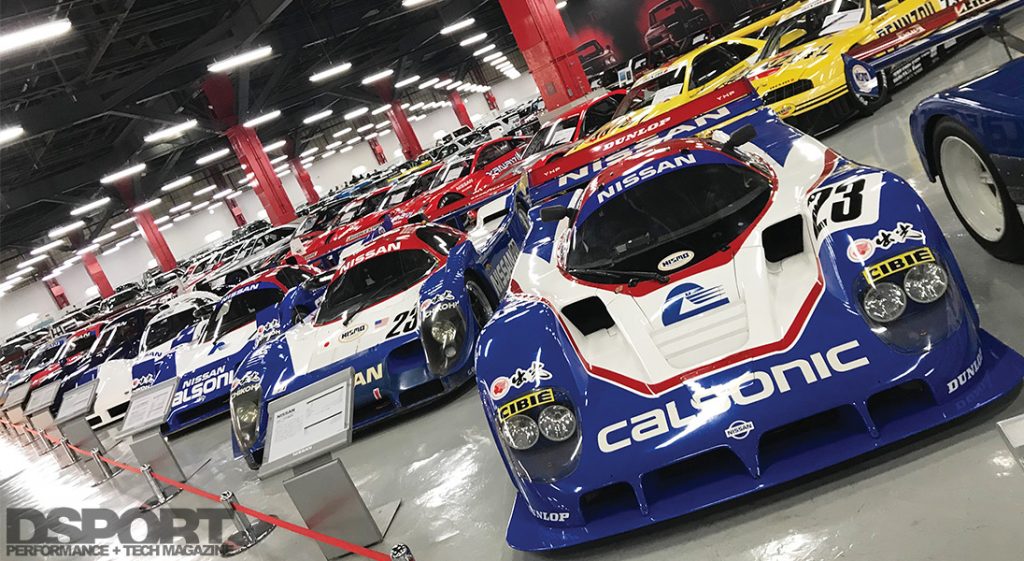 With hotel check-in, WIFI pickups, and the first night in our rearview mirror, it was time for the real adventures to start. Everyone jumped on the private DSPORT bus to head to the Nissan Heritage Museum, where attendees privately walked the museum with the help of tour guides. You can know a lot about the history of Nissan, but this tour-stop will make you rethink your knowledge. The museum displayed decades of historically-relevant cars dating back to 1933.

As we walked through the valuable collection, we learned about the evolution of the company in both street cars and its motorsports heritage. The floors were a shrine to the GT-R that displayed its creation, as well as some of the first Nissan cars to compete in the African Safari, which were preserved in their original post-race conditions; some of the most competitive World Sportcar Championship Nissan cars that competed globally, including the grueling 24 Hours of Le Mans race, and everything in between, even the start of Nissan’s electric cars. After the museum tour, attendees had some time to privately walk around the Nissan collection to take photographs, explore the little details on the cars, and ask questions about their favorite vehicles. The first stop was officially a hit. 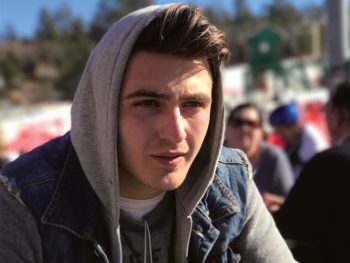 The 2018 TAS with DSPORT was unforgettable to say the least, being any JDM fan’s dream-trip to the motherland! Going to the Nissan Heritage Museum the first day in Tokyo was like candy land! Our tour guides were prior Nissan engineers, and my tour guide even developed the power steering for the Datsun S30 chassis, while another guide I spoke with developed a driveshaft driven AC pump from the wheel hub that would pump directly into the driver’s helmet. It was more than a “point and read the placard” museum, they each had decades of stories on how they contributed to Nissan in their careers.

Drifting at the Mobara circuit was definitely the most fun of the whole trip! Being that I do wheel to wheel circuit racing, I do have some sense of speed, but the turbos and backfires were no match for me screaming like a little school-girl with joy! It seemed like the more I yelled or made some whaling hand-motions, the harder they drove. DSPORT got us hooked-up to get ride alongs with the pro D1 drivers and their 1,000 hp cars, and it felt like the earth was rumbling around you bouncing off redline. The trip was half the fun, and I think the people and the staff really make up the other half. 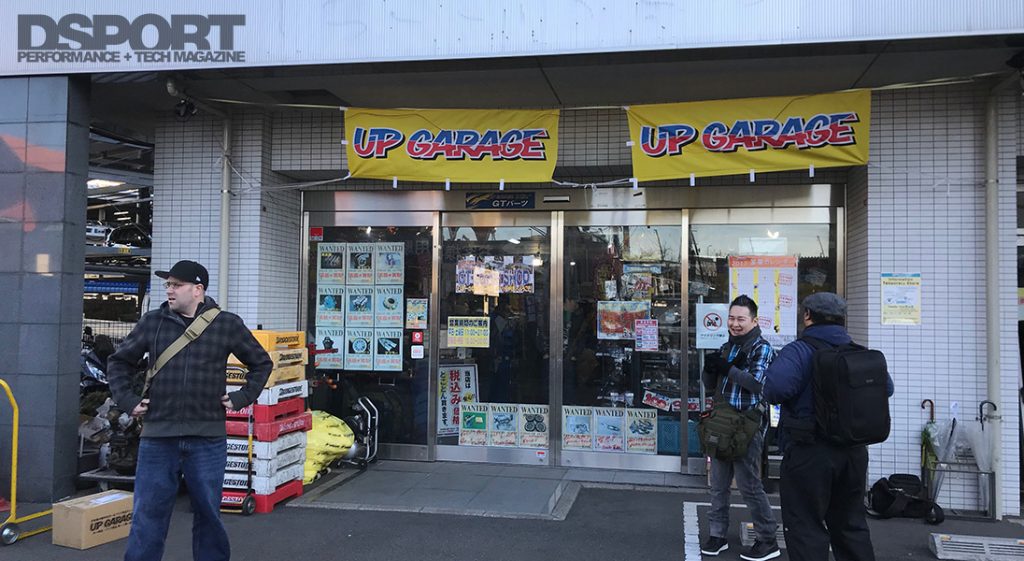 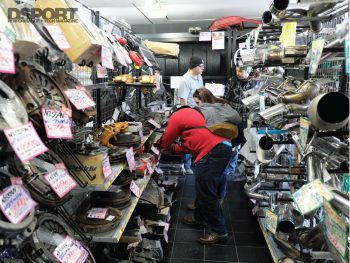 With everyone ready for the next adventure on the itinerary, the Nissan Heritage Museum’s executives walked us to the bus, waving us off to our next stop: Up Garage. If you don’t know what Up Garage is, it is the best place to treasure-hunt for used car parts. One time you could end up with a keychain, and others you could score an S2000 door for $20. The fun began and tour attendees started filling their bags with unique JDM parts. However, for the ones that couldn’t find what they were looking for, we got back on the bus and headed to an even bigger Up Garage, also known as the headquarters. Everyone on the tour got invited to the meeting rooms in their office, where they gave away some gifts and souvenirs, as well as snacks and drinks to keep us refueled. 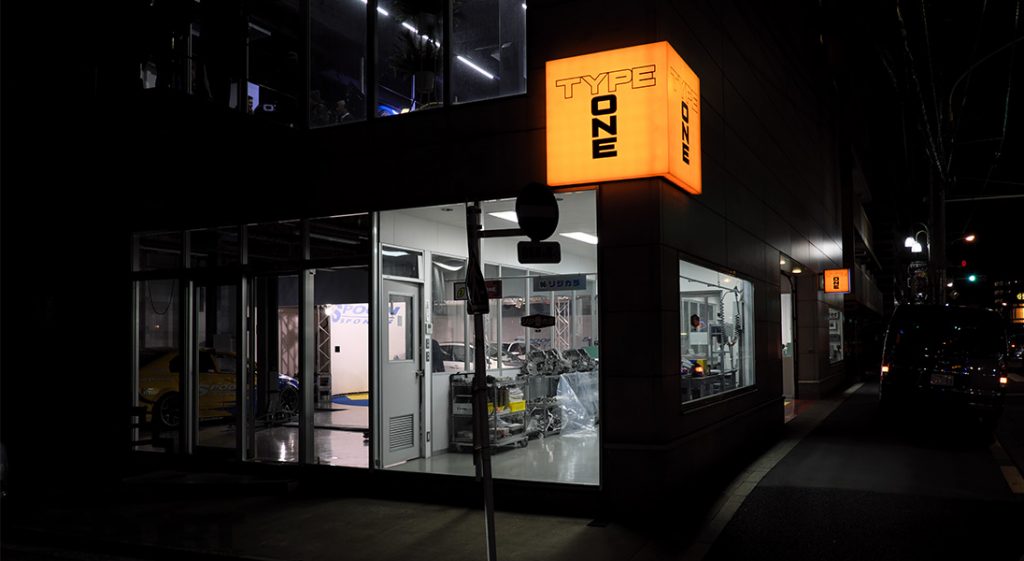 Spoon was the next stop; the place that has been building track cars for over 40 years. After touring the building and listening to the music of Spoon cars’ exhausts, the legendary Tatsuru Ichisima, founder of Spoon, came out and conversed with everyone, offering his opinion on some of the new Honda models and his legendary builds. 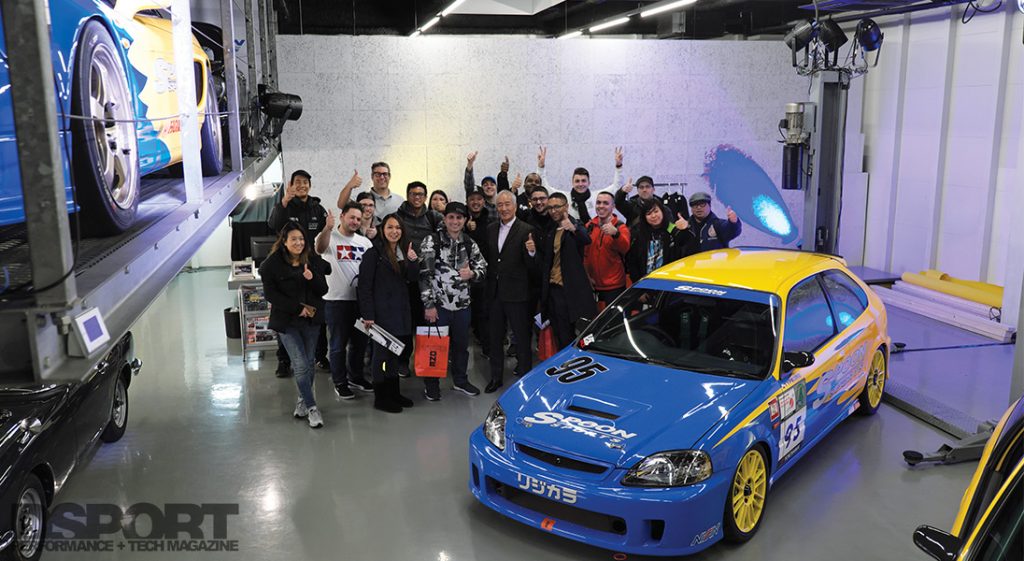 Tour attendees and DSPORT staff gather around with Spoon Sports president Tatsuru Ichishima for a photograph after touring the facility. 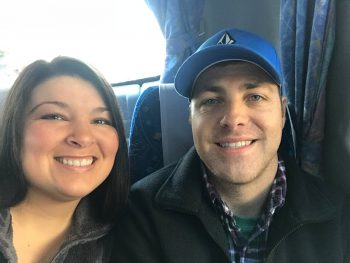 When I found out about the DSPORT Tokyo Auto Salon Tour, I immediately signed my wife and I up for the trip! With so many activities on the itinerary, we knew the trip would be fun, but TAS was the main reason for our trip. From the moment we arrived it was everything we imagined and more! Eleven jam-packed halls full of legendary tuners and cars with unmatched creativity is what we came to see. I even met and took pictures with some of my heroes from the industry.