World Rally Competition demands maximum acceleration and tire grip on all surfaces, including mud holes, snow, ice and perfectly-dry pavement. Not surprisingly, some of the best examples of race-friendly dyno curves are found with the Subaru WRX STI and Mitsubishi EVO X. Below are dyno graphs for a stock examples and tuned examples from Harman Motive. All four examples show easy race controllability when driven as they want to be driven. 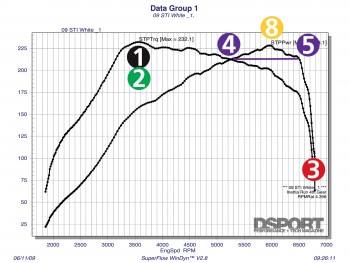 Shows a phenomenally-wide “automagic” traction control range. Points 1 and 2 occur at the same low RPM, and torque drops off controllably to redline. There is a small penalty for this feature. Horsepower at low RPM is down, because at point 4 (the upshift recovery RPM), torque has fallen off a lot from peak. As a result, the powerband from 4 to 5 is fairly narrow, and the area under the horsepower curve from 4 to 5 could be bigger.

Based on only the weight and peak horsepower of these two cars, drag-strip performance should be identical (ET and MPH within a few hundredths). Instead, test results show advantage to the Mitsubishi power-band and 6-speed TC-SST gaining almost 0.3 sec and 2 MPH. 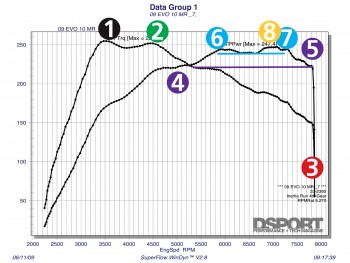 The EVO X has a wide powerband from 4 to 5, with more area under the curve than the STI. The factory close-ratio gear set allows you to drive between points 6 and 7. Between 6 and 7, you put more horsepower on the track, can shift as necessary without upsetting tire grip, and increase engine durability by reduced peak RPM (point 7 verus point 5).Pretty neat, but there is no free lunch. All the above happens thanks to a secondary torque peak at point 2. Since there is a saddle shape between 1 and 2, it might be tricky to drive when accelerating off a corner or launching on the drag strip in this RPM range. However, “automagic” traction control is very friendly between 2 and 3 because it falls off even faster than the STI’s curve. 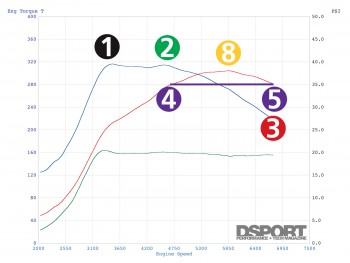 Now, let’s look into Harman Motive’s 2008 Subaru STI and Mitsu EVO X. Dan Harman upgraded the performance of both engines to nearly identical levels, and added point 2, the secondary torque peak into the STI power band. Harman’s STI torque curve has a little saddle between point 1 and 2, but it is so small that the driver’s control should not be challenged. Harman Motive also put point 2 and point 4 at the same RPM, which widens the rev range between shift points to almost 2,000 RPM and achieves excellent “automagic” traction control throughout that range. 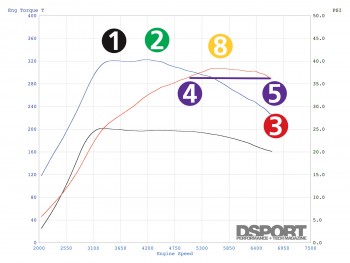 Harman Motive’s EVO X torque curve places the secondary torque peak (2) closer to the primary peak (1), with no saddle between. The result is a narrower rev range between shift points, about 1,600 RPM, with a 200- to-300 RPM wider range of “automagic” traction control. The differences are small enough that driver skill makes greater difference than engine power, torque or power band.