This dyno chart illustrates an engine with exceptional cylinder head-flow capacity teamed with a centrifugal supercharger. Since a centrifugal supercharger increases its output as the engine’s RPM increases, it’s entirely possible for the horsepower curve to always be climbing until redline. This occurs if neither the exhaust flow of the cylinder head or the flow-potential of the supercharger are realized before redline. Although this produces high peak horsepower numbers, the lack of a hump in the power curve means that “automagic” traction control will not be present and that the vehicle will always experience a difference in horsepower, before and after the shift. This makes for a vehicle that is considerably more difficult to race.

Peak horsepower and torque both occur at the same RPM, which is also the engine’s redline. Without automagic traction control, the driver must feather the throttle below maximum grip and back off faster than RPM rises (if possible) when grip is lost. Similarly, there is no rev range (Points 4 & 5, or 6 & 7) for seamless upshifting. Every upshift reduces acceleration instantly, which upsets tire grip when launching at the strip or when accelerating off a corner.

To make this engine produce a more race-friendly dyno curve, one could:

1) Increase the displacement of the engine as much as possible. This will absorb available airflow, increase port and valve curtain velocities and reduce the RPM where peak horsepower and peak torque occur. 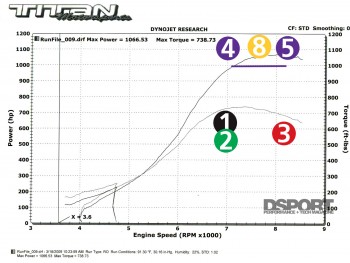 This awesome, 3.4-liter Supra has “automagic” traction control after points 1 and 2 at 7,200 RPM. However, the powerband is only 1,300 RPM wide. Dyno testing should be extended from 8,500 to 9,000 RPM, to find the shape of HP and torque curves on overrun. Of course, the engine must have been built properly to not encounter breakage at 9,000 RPM.

The ideal upshift recovery RPM (point 4) is also 7,200 RPM. The problem is that this point 4 is just 1,300 RPM away from point 5. With a close-ratio six speed, the RPM drop between gears is likely to be at least 2,000 RPM. This means that the actual upshift recovery RPM will be below 7,000 RPM. This means no “automagic” traction control on gear shifts. To remedy this, the next phase of engine development should focus on shifting peak torque down to 6,500~6,800 RPM, while building the engine to rev to 9,000 RPM. 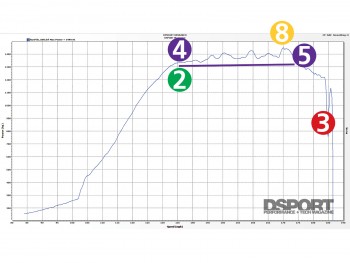 This dyno graph does not show torque, nor RPM. So, it is not very useful for race planning. However, the curve does reveal a remarkably flat HP shelf which must extend across 1,800 or 1,900 RPM. Horsepower is almost constant from 135 to 175 MPH. Therefore torque must fall off at the same rate as RPM increases in this range. From this, we know two things:

1) There is “automagic” traction control across the race rev range.

2) The driver can upshift or downshift anywhere in the race rev range without upsetting tire grip very much.

The bottom line is that this is a remarkable power curve, easy and forgiving to drive smooth and fast..

About The Author: Allan Lockheed

Allan Lockheed Jr. is the son of aviation pioneer Allan Lockheed [Loughead]. His uncles, Malcolm and Victor, invented hydraulic brakes and co-founded the SAE, respectively. Allan holds a degree in engineering with studies in math and systems analysis.