Imagine accelerating from a dead stop up to a average velocity approaching 5,000 feet-per- minute and back down to a dead stop 125 times every second. Now, imagine doing this in an environment seeing combustion gasses in excess of 1,400 degrees Fahrenheit. Sounds like Hell and that’s exactly what each piston in your engine must endure when you are buzzing at 8,000 RPM (with a 95mm stroke engine). Now imagine converting the linear motion from the pistons in the cylinders to a rotating motion while being subjected to 600, 700 or 800 lb-feet of torque. That’s the job of the connecting rods and crankshaft. Obviously, the pistons, rods and crankshaft need the strength to survive the power levels that will be explored. However, minimizing the weight of the rotating assembly along with selecting the appropriate design technologies can result in additional performance and reliability.

The factory rotating assembly is made under the mantra of keeping production costs as low as possible. As a result, the majority of pistons found in today’s engines are of the cast variety while rods are generally engineered with just a small factor of safety to survive the rigors of power increases of no more than 30-percent in many cases. As for the crankshaft, the majority of Japanese-engine crankshafts are high-quality forged steel and can generally handle just about any power level at moderate RPM levels. 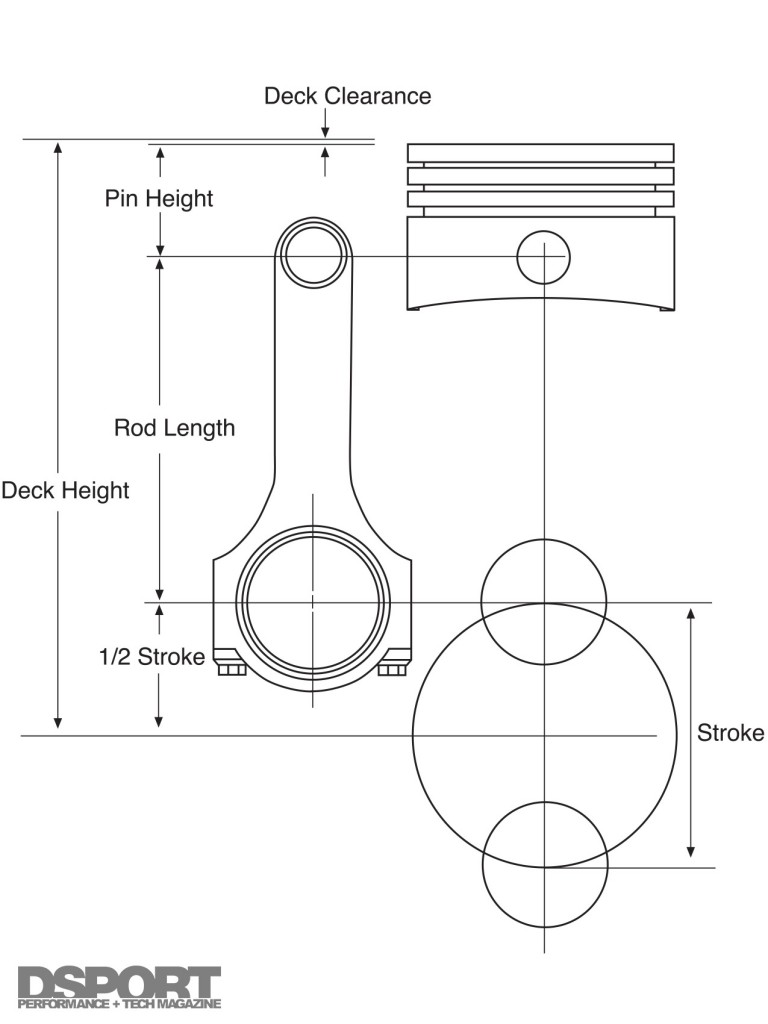 However, when more displacement is wanted for a particular application, a high-quality “stroker” crankshaft can add some CCs to the mix to increase torque output and low-speed response.

Calculating your piston, rod, and crankshaft specs prior to your engine build will help you determine how your engine will run post-build. 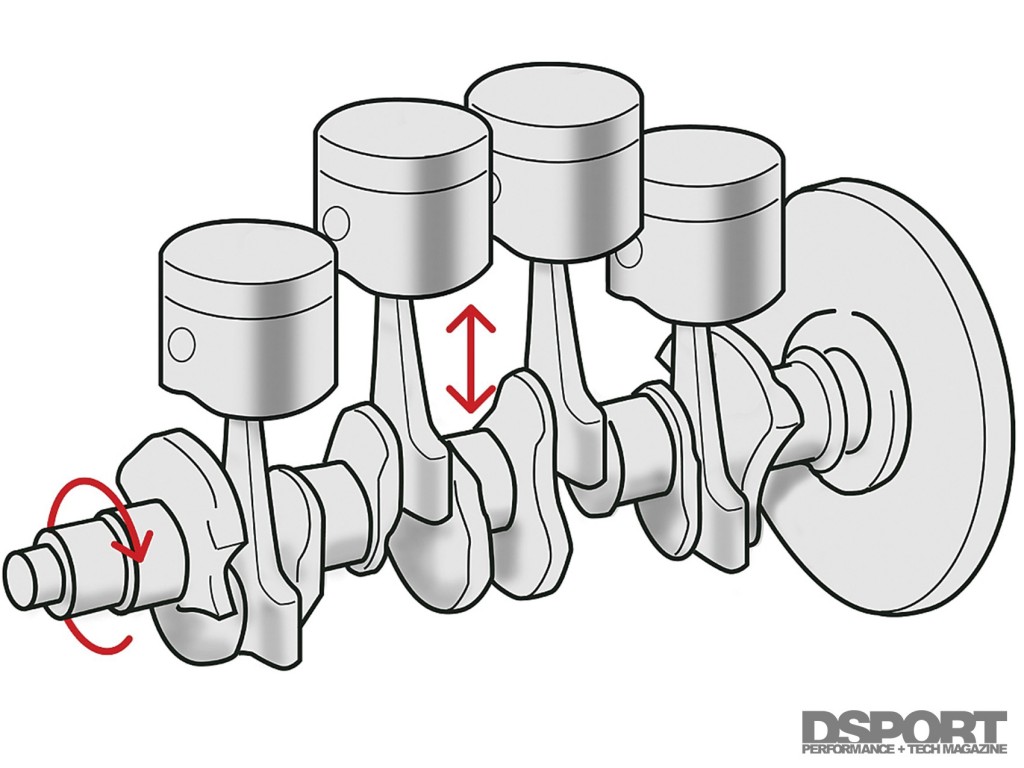 A high-performance aftermarket piston can increase performance in six different ways. First, the forged performance piston can be made in a variety of bore sizes to increase the displacement of the engine. As a rule of thumb, the percentage increase in displacement will deliver an equal percentage increase in torque and horsepower. Second, aftermarket performance pistons can be ordered in a higher compression ratio than the original piston. The higher compression ratio improves the thermal efficiency of the engine. This allows the engine to produce more power while reducing exhaust gas temperatures. For most applications, an increase of a full-point in compression ratio generally results in a four percent increase in horsepower and torque. Third, aftermarket forged pistons, when combined with a quality set of piston rings, will generally deliver an improved ring seal. This improved ring seal means that the pressure stays in the cylinder instead of escaping to the crankcase. As a result, the engine once again delivers more power and runs more efficiently. Fourth, a well-designed aftermarket performance piston will free up some additional horsepower by reducing the friction in the cylinder. Many times, the forged pistons will use thinner ring sets and have a skirt profile which dramatically reduces cylinder-to-piston contact. Some manufacturers take the technology even further and apply a dry-film lubricant to the piston skirts to further minimize friction. Fifth, the stronger alloy used in forged pistons can handle more boost pressure on force-induction engines. Increased boost pressure combined with the right amount of fuel and ignition timing will lead to more power. Finally, since the material and manufacturing process used to make a forged piston are superior to cast pistons, weight can often times be removed from the piston. A piston can also be designed to use a shorter piston pin to further reduce the overall weight. A lighter weight piston allows the engine to run more comfortably at higher RPMs while making it more responsive.

In addition to providing at least six opportunities to improve power output, an aftermarket forged performance piston can also deliver six ways to improve strength and reliability. First, forged pistons are available in either a 4032 (low-silicon) or 2618 (zero-silicon) material. Both of these materials have superior physical characteristics compared to the aluminum alloy used in most cast pistons. This means you are starting with a superior material. Second, an aftermarket performance forged piston can reposition the rings grooves to lower the ring package away from the heat or increase the size of a ring land that’s susceptible to damage from detonation. Third, through finite element analysis and computer modeling; a piston manufacturer can redesign a piston’s structure to provide the highest ratio of strength to weight. Fourth, along these same lines a performance piston manufacturer can increase the thickness of the material in critical areas like the crown and pin boss areas of the piston. Fifth, a piston manufacturer can apply a thermal barrier on the crown of the piston to limit heat transfer through the piston. Finally, the piston designer can employ bigger diameter or thicker-wall piston pins to carry the high stress and strain of increased horsepower demands.