Increasing the stroke of an engine also has its tradeoffs. First, the piston and/or connecting rods must be matched to work with the increase in stroke. Normally this requires moving the piston pin to a higher location in the piston and/or reducing the center-to-center length of the connecting rod. Second, many stroker crankshafts require “relieving” of the block to accommodate the longer stroke. This process involves grinding away at the block to make clearance for the counterweights or connecting rods that would otherwise interfere at the elongated stroke. Third, peak engine RPM, as limited by maximum-desired mean piston speeds, will be reduced.

If 9,000 RPM produces 5,000 feet-per-minute maximum mean piston speeds on a 86.4mm stroke, increasing the stroke by 10-percent to 95mm will reduce the redline to 8,000 RPM (for the same 5,000 feet-per-minute mean piston speed). Fourth, an increase in stroke also increases the side loading of the pistons against the bores during the crankshaft’s rotation. As a result, cylinder bore wear increases too. Based on the pros and cons, a stroker crankshaft may or may not be the right choice for you. 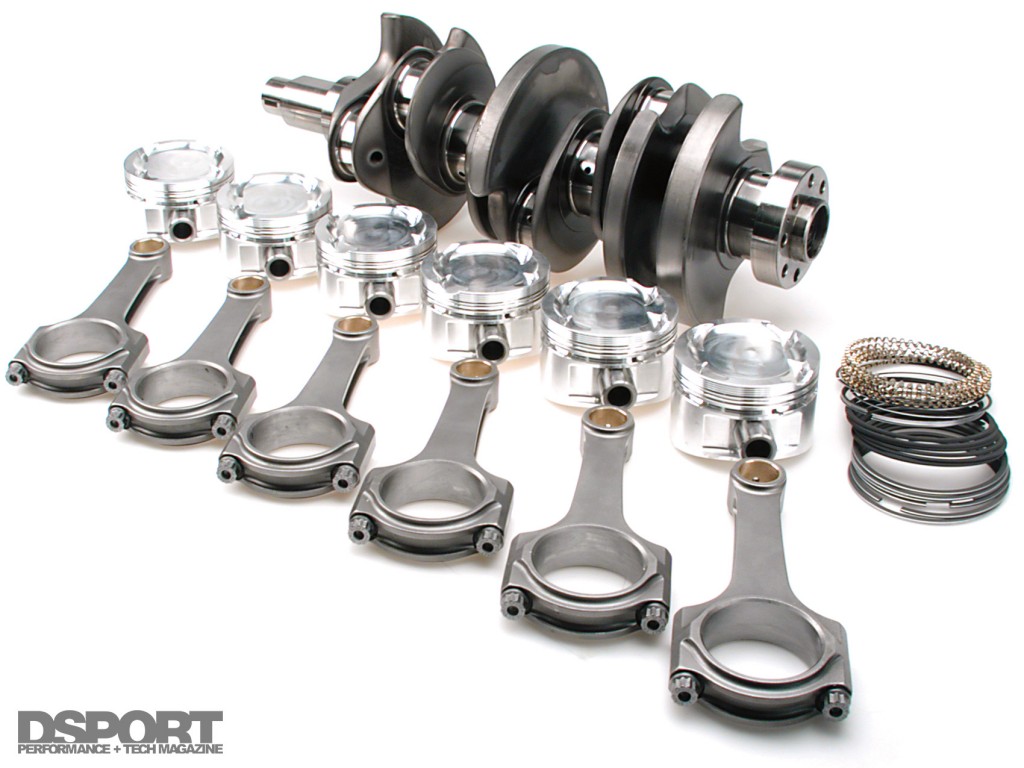 Stroking your engine involves a piston, rod and crankshaft selection that will work together the way you intend it to. Many manufacturers make complete drop-in stroker kits.

When an engine’s power output is increased, the supporting systems also need to be enhanced to avoid engine failure. Aside from the obvious lubrication and cooling needs, an engine also relies on a harmonic damper bolted to the crankshaft in order to provide reliability and longevity. 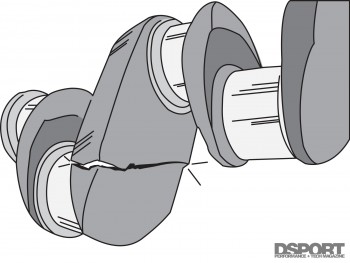 If no crankshaft is safe from vibrations, how is it that engines don’t fail shortly after construction? The answer is because every automotive manufacturer incorporates a form of harmonics damper on the crank pulley. These units typically utilize an inertia ring sandwiching an elastomer tuned to neutralize vibrations at the engine’s natural frequency. As a crankshaft transmits vibrations to the inner hub of the damper, the inertia of the spinning outer ring suspended by the elastomer counteracts the vibrations. Factory- equipped harmonic dampers do a fine job of eliminating engine-damaging frequencies when the engine is stock. 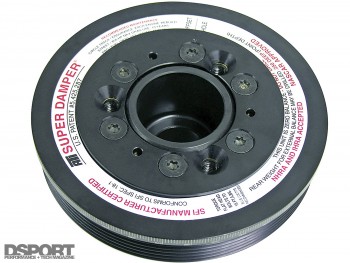 However, if a rotating assembly’s properties change or power output is increased, the factory-installed harmonic damper becomes insufficient at neutralizing harmonic buildup. This has prompted a handful of manufacturers to engineer crank dampers designed for performance engines.

Aftermarket import-performance damper manufacturers produce two different types of damping technology: elastomer and viscous fluid. Much like OEM dampers, elastomer units utilize a specifically-tuned rubber (or other similar material) to hold an outer inertia ring. The lag produced by the flexing elastomer between the inner hub and inertia ring produces counteracting torque to crankshaft vibrations. While a viscous-type damper produces similar vibration-counteracting torque, it relies on an inertia ring suspended by gel inside the unit. DSPORT experienced both technologies with its project cars and both succeeded in preventing failures from harmonics.