Mitsubishi’s 4G63 engine is arguably one of the best four-cylinder engines ever built. While the early variants set records powering DSMs, later versions of the engine propelled the EVO VIII and EVO IX. In terms of strength, power potential and ease of service, the 4G63 engine simply has no equal. When DSPORT set out to conduct an extensive camshaft showcase, the 4G63 EVO VIII engine was the obvious choice. Thanks to the Volumetric Efficicency (VE)-based technology in the latest-generation of aftermarket ECUs, DSPORT is able to conduct the most comprehensive, accurate and repeatable “cam-paro” ever. 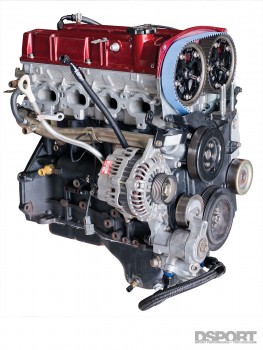 The 4G63 has a number of design features that make it ideal for high-performance upgrades. The 4G63’s cast iron block doesn’t require sleeving to support extreme cylinder pressures and power output. The factory crankshaft is also capable of handling in excess of 1,000 horsepower. Simply upgrading the rods and pistons allows the power handling of the short block assembly to eclipse the 1,000-pony mark. The cylinder head is also a capable performer that supports the flow necessary for big power. When it comes to serviceability, the 4G63 is on par with none in terms of camshaft upgrades. Mitsubishi designed the hydraulic valvetrain and timing belt tensioning system to allow for quick and painless camshaft swaps. With the right set of tools, swapping a set of cams in under an hour can be a reality. 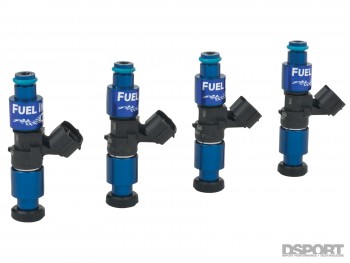 In the past, a camshaft change required a complete recalibration of the ECU’s fuel maps. This process not only added additional time to a test, it also opened the door for another possible source of error. After all, what if the fuel curve was roughly set on the factory cams and then ultra refined on Set A of the aftermarket cams? The better tune might show a higher power gain and skew the results. Fortunately, AEM’s Infinity Engine Management System (EMS) allowed us to completely remove this source of error. By setting up the Infinity EMS to use its closed-loop lambda feedback along with its VE fuel tables, we were able to minimize the air/fuel (A/F) variance from run to run. As cams were changed, we didn’t have to touch the maps at all. Instead, the Infinity simply delivered the target A/F ratios that we requested. Best of all, the datalogs let us know how much the VE of the engine changed as we ran different camshafts. 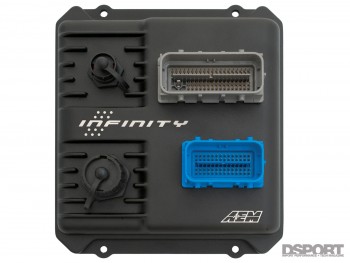 We had used this red EVO a while back, while testing the AEM Water/Meth Failsafe system, and it seemed like a good candidate. Even though the engine had over 100K miles on it, there was already a healthy-sized FP GTA FT3586R turbo in place on a JM Fabrications tubular manifold. This 62mm inducer turbocharger is capable of providing airflow to support in excess of 700 hp. Set up to run on E85 fuel, we didn’t expect to run into any issues. Of course, we would not be so lucky.
On Day One of the testing, the clutch started slipping after installing our first set of aftermarket cams. The EVO owner apologized, took the car back and returned it a couple days later with a fresh clutch. While the new clutch held the power, the install created an issue that would take out two engines before being identified. In the process of changing the clutch, the owner had bent the oil pan under the pickup. The pickup couldn’t get enough flow at high engine speeds, and oil pressure was insufficient. This led to spun rod bearings. 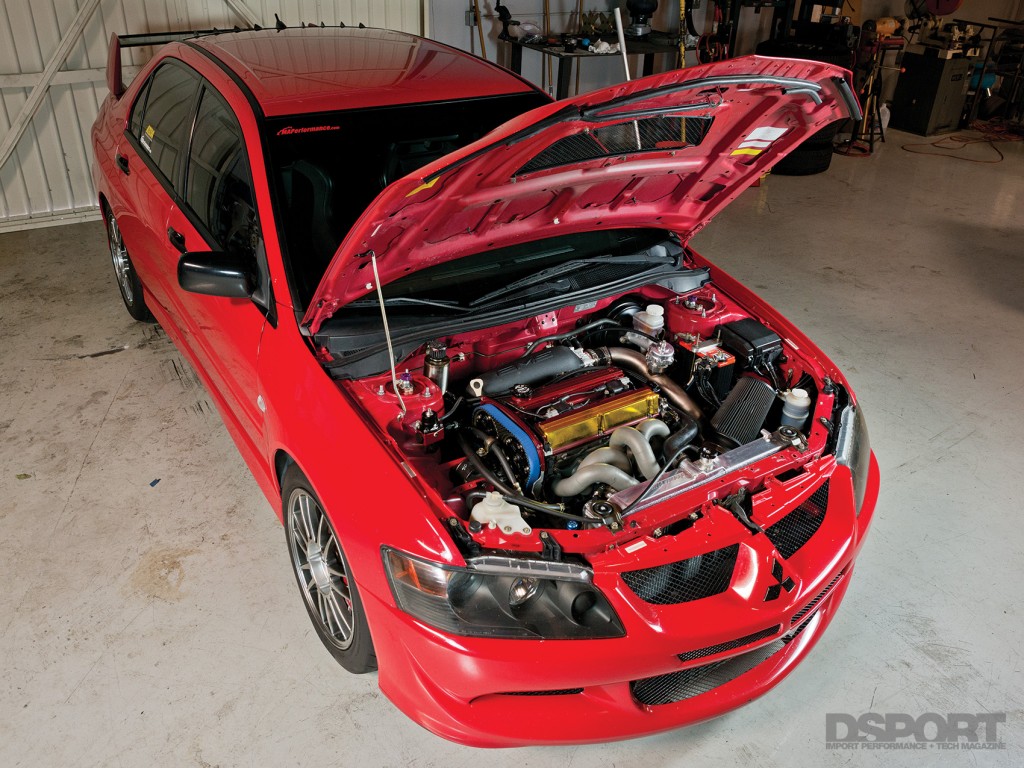 Fortunately, DSPORT had the facility, staff and capabilities to build a new dyno mule engine that would not fail during 100 dyno pulls. This would allow us to test the 18 different camshaft grinds that we had on hand. A set of 2,150 cc/min injectors from Fuel Injector Clinic delivered the additional fuel volume required when using E85. The upgrades consisted of forged CP Pistons, Carrillo connecting rods and a Port Flow Design-prepped cylinder head, featuring a Supertech valvetrain. A set of ARP main studs and CA625+ alloy head studs were selected to keep the crank and head in place. 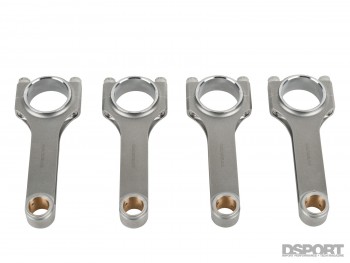 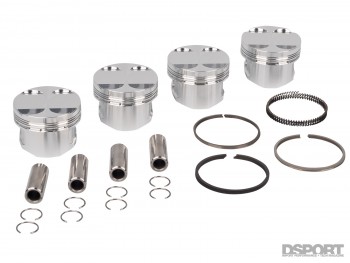 After establishing a baseline with the factory camshafts, we decided to run an assortment of camshaft sets from the same manufacturer. In this way, we could ensure that the results were following the proper trend. A selection of camshafts from Kelford Cams was chosen: Kelford’s 264, 272 and 280 camshaft sets would hopefully show the expected progression from a mild to a wild camshaft.

All of the camshafts evaluated in our showcase were spun up on our Cam Pro Plus analyzer (from Audie Technology) to get exact lift and duration figures. All of the camshafts were installed “straight up” on the AEM camshaft sprockets, which were double checked for zero to the factory sprockets. Boost was regulated by a simple manual controller and not manipulated in any way from run to run.

The linked pages (right) showcase the specs and performance from the factory cams, as well as the three offerings from Kelford Cams. As expected, the camshafts showed an improvement in top-end power as we moved from milder to wilder grinds. There was also a slight tradeoff in bottom-end power, also as expected. The one “X-factor” in the results had to do with some midrange power differences that were not as anticipated. In our opinion, the massive AMS intake manifold likely affected the results. A factory intake manifold may have traded off some top-end power, but it would have likely delivered more predictable results in the mid range rpm band. Next month, we’ll feature the other 14 camshaft sets that were also tested.