How refreshing it is to have our Project EVO in the magazine for two consecutive issues. Things rarely go as planned in the world of magazine project cars, but last month things finally started to come together for our Project EVO. To top it off, we finally managed to get over the 300-wheel-horsepower hurdle on XS Engineering’s 4WD dyno.

DSPORT Issue #21 In the beginning of our Project EVO, we had outlined breaking our buildup into three distinct levels of tune. Level One would seek to maximize power with the factory turbocharger. Level Two would look for maximum performance with the factory short block and an aftermarket turbo system. Finally, Level Three would extract the additional power and reliability of a built bottom end. This installment represents part three of our Level One buildup. We have made tremendous progress, but we’re not yet finished maximizing performance on the factory turbocharger.

Our part three players would include a Helix/Gruppe-S cat-delete pipe, an XS Engineering intercooler upgrade and an XS Engineering intercooler hard pipe kit. As we have done in the past with this project, all three parts were installed and then the HKS FCON-V Pro engine management system was tuned to be sure that safe air-fuel ratios and knock counts were maintained while performance was maximized. 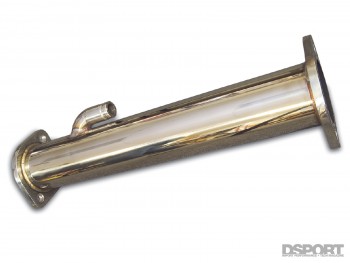 The Helix cat delete pipe from Gruppe S let us eliminate the last big restriction in the exhaust flow. With the cat removed and the Helix pipe in place, a little more ignition timing (plus 1 degree) could be safely run in some parts of the ignition map. More fuel needed to be added as airflow through the engine improved. Eric Hsu of XS Engineering found that a 10.7-to-1 airfuel ratio still slowed the combustion enough to limit knock. With the cat in place, the air-fuel ratio needed to be run at a richer 10.5-to-1 ratio to eliminate knock. 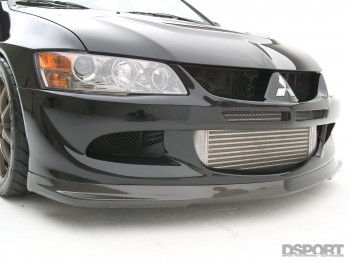 The XS intercooler Power I/C cores utilize state of the art tube & fin type construction. The XS Power intercoolers offer a high density of fins inside of the tubes for quick and efficient heat dissipation while utilizing a slightly less dense outer fin setup to provide excellent flow to the radiator. The Power intercooler system for the EVO-VIII uses a two-row design to maximum performance in streetperformance vehicles. It’s recommended for any EVO making less than 600 wheel horsepower. Above this level, custom XS Engineering three and four-row intercoolers can be made. We had the opportunity to look at the before and after improvements in heat rejection with the XS intercooler compared to the factory Mitsubishi unit. During our datalog, outlet temperatures from the turbocharger were 187 degrees. This was the temperature going into the intercooler. The outside or ambient air temperature was 89 degrees. The temperature of the air coming out of the intercooler was measured at 151 degrees with the stock core (much of this due to heat soak of the small factory intercooler) and just 102 degrees with the XS intercooler in place. This drop of 49 degrees was substantial. The efficiency of the XS intercooler at this boost level (21psi) and horsepower level (300-350 whp) checked in at an excellent 86.7- percent. This compares to an efficiency for the factory intercooler of less than 40 percent at this boost pressure and horsepower level. Don’t be fooled because it looks big. The factory intercooler is a proven restriction to performance on even mildly-modified EVOs. From a tuning standpoint, the drop in temperature allows a number of benefits. First, air density is increased. With this benefit, the rule of thumb is that every 11 degree of temperature drop should allow a 1-percent increase in power. Based on the 49 degree drop, this alone should account for a 4.5% increase in horsepower. Second, from a tuning standpoint reduced intake air temperatures will generally allow for additional ignition advance. The XS Power I/C Intercooler allowed the ignition timing to be safely advanced two to three degrees in some areas of the ignition map. Power increases resulted from the addition of the intercooler with very minimal additional fuel. 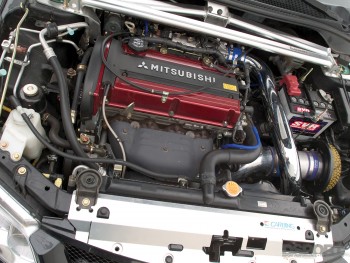 The XS Engineering hard-pipe kit for the EVO required that we also replace the factory battery with a smaller unit. The pipe kit features 70mm piping (stock is 60mm) and it eliminates a number of bends and length compared to the factory routing. The larger volume of the intercooler pipes means that peak boost comes in 150 to 200rpm later in the lower gears, however boost pressure holds more consistently since no energy is wasted to swell the factory pipes. Once again, timing could be advanced one to two degrees with the addition of the pipe kit.
Pages: 1 2 3
On September 1, 2004