In the world of time attack in Japan, one of the most venerable tracks and benchmarked venues is Tsukuba Circuit. This famous racetrack could arguably be the birthplace of time attack competition. Although Tsukuba opened in the late 1960s, tuning shops didn’t start to actively compete in time attack-style venues until the Rev Speed Tsukuba Super Battles of the early 1990s. The Super Battles pitted together shop project cars and high-profile customer vehicles in competition for the quickest lap. At the first event, Tarzan Yamada piloted the Mine’s R32 GT-R to victory with a lap time of 1:00.85. While there have been plenty of sub-one minute lap times since then, this inaugural lap time has made the minute a benchmark target for all competitors. 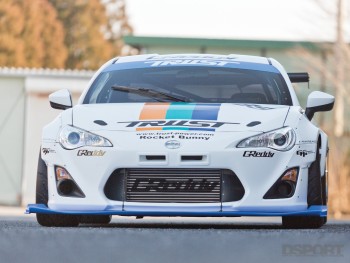 GReddy Performance Products and its parent company in Japan, TRUST Co., Ltd., have been closely monitoring the pulse of the industry. They were quick to work with high-profile partners like Ben Sopra and 6666 Customs/TRA Kyoto on projects involving the R35 GT-R and the Toyota 86. These platforms have led the import performance market since the global recession began its recovery. Even two years after its initial release, the Toyota 86/Scion FRS/ Subaru BRZ continues to be the go-to platform for enthusiasts and the aftermarket. According to Toru Kawashima of TRUST Co. “We brought over a USDM Scion FR-S initially to serve as a test bed and prototyping platform to develop products for the left-hand-drive markets like the USA. Once we were satisfied with the parts development program, we decided to pull out all the stops and unlock the potential of the FR-S by developing it for time attack competition.” TRUST Co. set out to build the FR-S to break the one-minute barrier at Tsukuba. Since stock 86s and BRZs have recorded times around one minute and 10 seconds, achieving this goal would require a balanced combination of power, suspension and aerodynamics.

GOING FURTHER WITH THE FA20 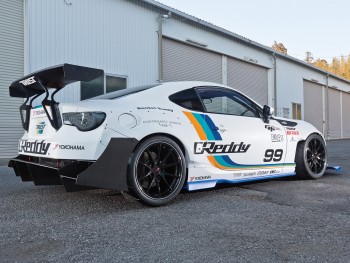 Producing the power needed to reach their goal would require a significant increase over the 200 ponies that the stock engine makes at the crank. With this in mind, forced induction offered the best solution. However, reinforcing the bottom end was a must to ensure reliability under boost. The Toyota 4UGSE boxer engine, essentially a Subaru FA20, is still a fairly new mill with limited aftermarket development. This left the TRUST Racing Team with few choices. After breaking down the engine, the cylinders were filled with a set of prototype 9.0-to-1 GReddy pistons that join the stock crank by way of Carrillo connecting rods. At each end of the shortblock, the cylinder heads received some light port work before being reunited with the block. A pair of prototype head gaskets ensures a proper seal between the heads and the block halves. According to TRUST/GReddy, aftermarket FA20 camshaft blanks have yet to reach production; therefore, no aftermarket cam options were available for the build. Thus, the factory bumpsticks continued to actuate the valvetrain.

AFTER PLUMBING A NITROUS OXIDE SYSTEMS WET FOGGER INTO THE CHARGE PIPE… THE FR-S SPUN THE HUBS TO 506.7 HORSEPOWER
With the FA20 engine fortified for forced induction, it was time to put some boost into the boxer. A custom equal-length exhaust manifold positions a GReddy TD06S L2 20G turbocharger at the front of the engine bay. Spent gasses leave the turbine housing and channel to the rear of the chassis by way of custom piping and a one-off GReddy Tsukuba SPL titanium exhaust. The 20G compressor forces the intake charge through a GReddy Spec-R HG Type 28 front-mount intercooler en route to the factory throttle body and intake manifold. Utilizing EcuTek’s reflash software, the fuel and ignition tables were adjusted to compensate for the 19.6 psi boost pressure filling the cylinders. With the chassis mated to the pods of a Dynapack chassis dynamometer, the FR-S produced 405.5 horsepower to the hubs. While 405.5 horsepower put the FR-S into a competitive position for racing, the TRUST Racing Team decided to add some laughing gas to the mix to see what the engine could hold. After plumbing a Nitrous Oxide Systems single-shot wet fogger into the charge pipe and retuning the ECU for 23.2 psi, the FR-S spun the hubs to 506.7 horsepower.
1 2 3
4U-GSE Circuit FR-S Scion Turbocharged ZN6
Share. Twitter Facebook Google+ Pinterest LinkedIn Tumblr Email
Previous ArticleRevyou Supercharged Nissan 370Z
Next Article First Drive | 2015 Subaru WRX STI