Boost is Best. If you disagree, find a 1,000WHP 2.0-liter, four-cylinder engine without a turbocharger. On turbocharged engines, the turbo(s) takes center stage in determining the ultimate power output. If a turbo lacks the capacity to hit the power goal, the goal will not be realized. If a turbo is “too big,” the powerband on the engine will be extremely narrow. An absence of low-end and mid-range power results when a poorly matched turbocharger is selected. Text by Michael Ferrara // Photos by Jun Chen 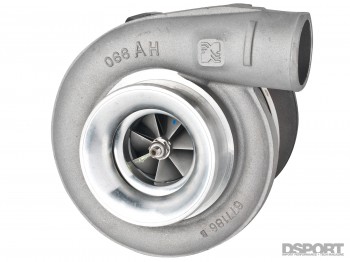 TAKING IT TO THE LIMIT

While you may be more familiar with the newest-generation of EFR turbochargers from BorgWarner Turbo Systems, there are offerings in BorgWarner’s AirWerks lineup that have been setting records for nearly a decade. Back in 2004, the AirWerks team developed its S400SX line of turbochargers. This line went on to dominate in the top classes of import and sport compact drag racing. For 2013, the prototype division of BorgWarner Turbo System (BWTS) developed the “72mm Class Limit Turbo.” This AirWerks S400SX descendent delivers peak response and performance in racing categories that limit compressor inducer diameter to 72mm. Despite this limitation, the BWTS 72mm Class Limit Turbo (CLT) can support the airflow necessary to produce over 1,000whp. The turbocharger’s 57-trim compressor wheel features a 95.7mm major diameter, extended tip height (7.5mm) technology and cutting edge aerodynamics for exceptional efficiency. Available with either a billet (FMW, Forged Mill Wheel) or cast comp wheel, the performance is said to be identical. Since some sanctioning bodies apply a weight penalty for billet compressor wheels, we opted for the cast version. Matched to a “race cover” compressor housing, a forgiving surge line allows small displacement engines to use this massive compressor. To drive the compressor, the 72mm CLT uses an 87.5-trim, 87mm OD Inconel turbine wheel designed to extract maximum energy from the engine’s exhaust. A “T4” divided footprint turbine housing in a 1.25 A/R features a 4.0-inch V-band discharge. Pairing the divided inlet turbine housing to a manifold constructed with a divided outlet improves boost response. 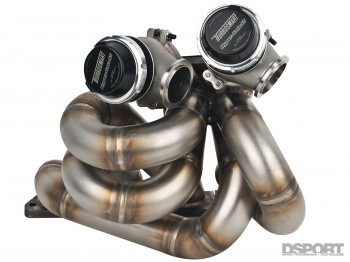 To position and feed the turbine, we selected a Full-Race Twin Scroll Top Mount PRO-AM turbo manifold with dual 44mm wastegate V-band connections. A pair of Turbosmart 45mm Hyper-Gates were selected for boost control. This latest generation of Hyper-Gate features a smaller body for better fitment while delivering the same killer flow rate. Since we wanted to be able to run a wide range of boost levels, we will be using a 4-port boost solenoid to allow us the ability to regulate boost pressure over four times the spring pressure. 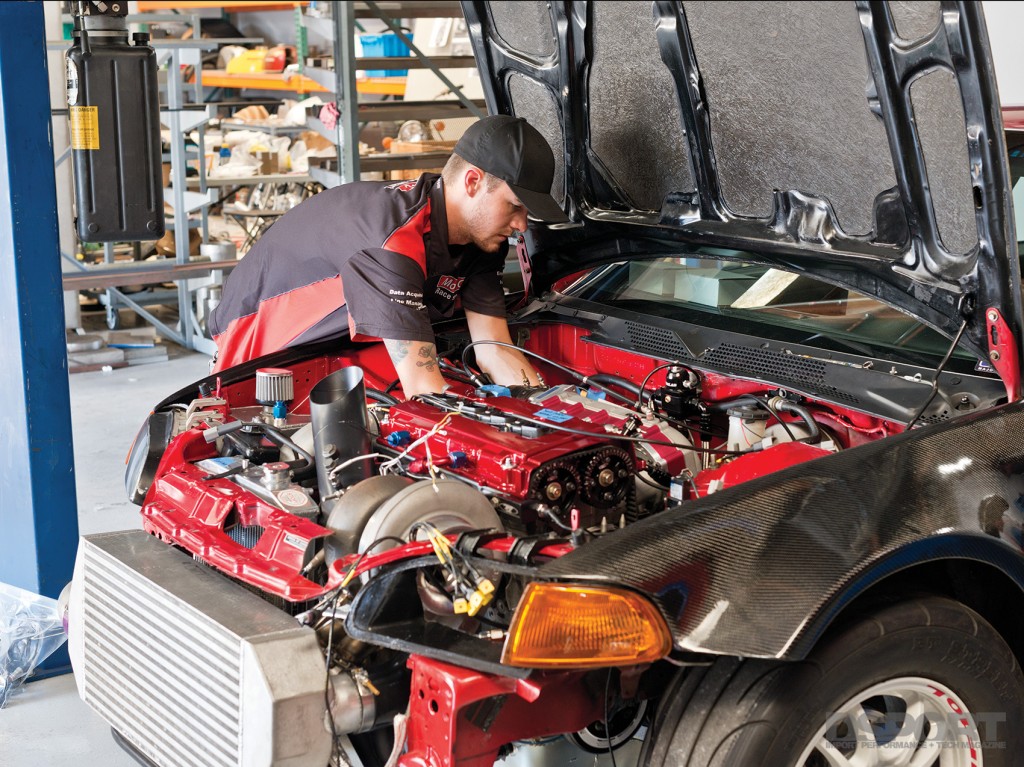 While any 1,000 horsepower engine project has a serious degree of excitement, this project has to be our hands-down favorite. Why? There are simply so many things that we can learn with this engine. Having a DOHC engine with adjustable cam timing gears, an intake manifold with three different plenum volume configurations (3.5-, 4.5- or 5.5-liters) and an engine management solution that provides superior control and datalogging opens the door for serious engine development. 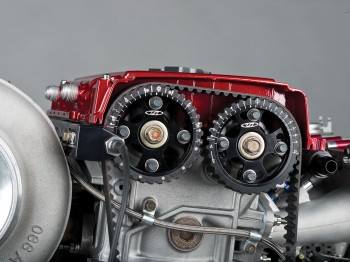 A pair of adjustable timing gears, like our set from T1 Race Development, allows for serious manipulation of the size and shape of a DOHC engine’s torque and power curves. On a twin-cam four-cylinder engine, all valve-timing events can be advanced or retarded by moving the gears in unison. These changes result in shifting the torque and power curves lower or higher in the RPM band, while maintaining the same shape. However, the real fun occurs when the two cams are not moved in unison. This results in changing the lobe separation angle and the amount of overlap. To do this properly requires a mastery of the valve timing events of a four-cycle engine. These valve timing changes will not only shift the torque and power curves, they will also change the curve to be more flat or more peaky. 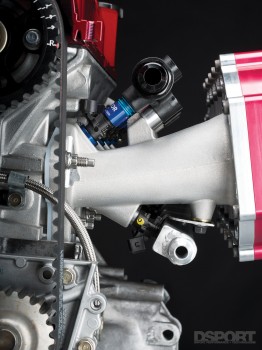 The Skunk Ultra-Series Race Intake manifold also brings a tuning option to the mix. This modular manifold can be set up to provide three different plenum volumes. In nearly all cases, increasing the plenum volume adds torque and power. To what degree, depends on the engine combination. Increasing plenum volume usually increases power and torque without shifting or changing the shape of the power curve. However, there is a drawback. Larger plenums can dull throttle response when the throttle is mashed from a fully-closed to fully-open position. Of course, this engine will start and finish its races at full throttle so a decrease in throttle response should be a non-factor. Sensors for sensors, and then some more sensors. As we work with MoTeC on instrumenting and setting up the engine for the M800 system, we look forward to the degree of control and logging we’ll have at our disposal. When every performance parameter is being logged, a great deal of the guesswork is taken out of the engine development equation. If we were handicapped by a system that couldn’t record so many channels at such a high frequency, we would likely have to subject the engine to more pulls or runs to get the data we needed. Once we have dialed in the cam timing, plenum volume and engine calibration to deliver the power and torque curves we desire, the MoTeC will be ready to show off its other features and controls. The M800 will provide traction control, nitrous control (if we decide to add the giggle gas), boost control, anti-lag and flat shift strategies. These controls will allow the vehicle to maximize its power delivery on launch, limit driveline shock on shifts and provide a boost curve that is RPM, speed and/or time dependent for quicker elapsed times. 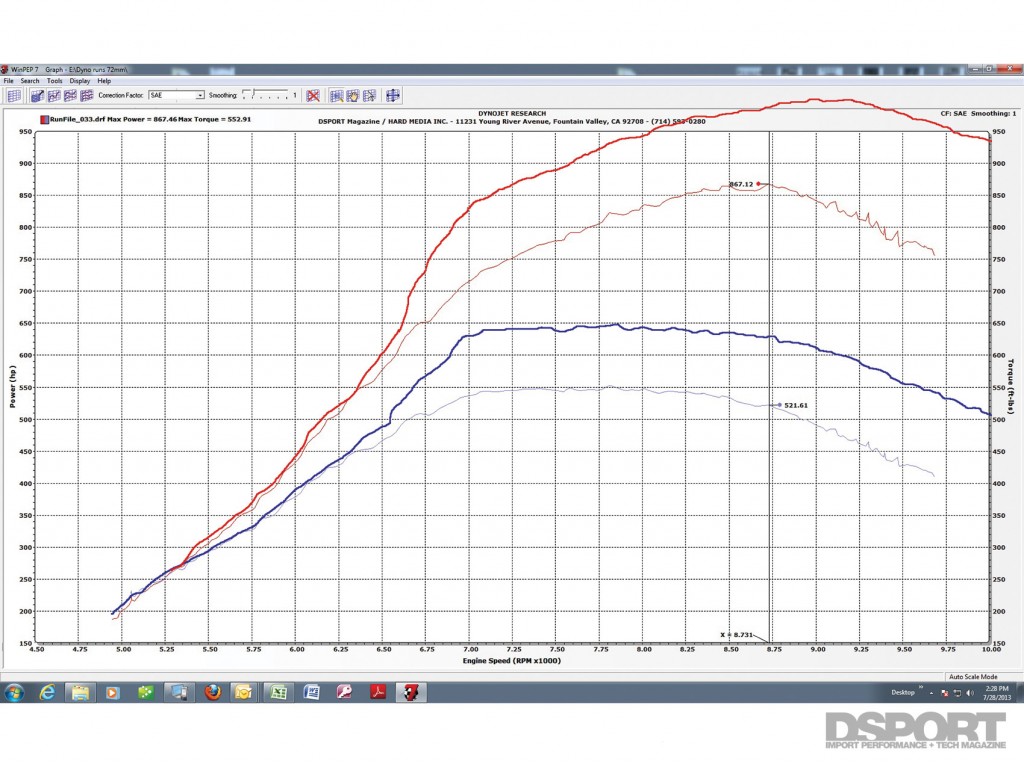 We need to increase power output over the previous engine/turbo combination by just over 15 percent. The thick red line shows our targeted horsepower curve, while the thick blue line represented our targeted torque curve. Thin lines represent the former combination.

To the Dyno and Beyond

[pullquote]WILL THIS CIVIC GET INTO THE 8s?[/pullquote]As we wrap up this issue, a team from MoTeC is completing the hookup of the motorsports harness to the engine and the MoTeC ECU. Tomorrow, the engine will be fired to life for the first time. The day after, the Civic will meet the dyno for its first round of calibration. Only two days after that, the Civic will head to its first Test-n-Tune session at the strip for a shakedown and setup session. Will the engine make its power goal? How much will cam timing and plenum volume affect the power curve? Will this Civic get into the 8s? Subscribe to DSPORT, like our Facebook page, join our YouTube channel and follow our Instagram, so you’ll know everything about the FAME Civic Project in D’GARAGE.