Jesus was forced to resort to resurrection before being able to convince billions he is the real deal. Of course, even God has only been able to convince one third of the population that he is legit (according to Christian math). Today, nearly 15 percent of the world population isn’t sure or doesn’t believe that God exists. Convincing the world of even the most important truth is no easy task. For DSPORT, we’re simply trying to convince millions of Honda performance enthusiasts that what they’ve read on their favorite forum may not be the Gospel. While we haven’t turned water into wine or walked on water, some may believe that we have performed some minor miracles with our Project FAME Civic build and its 1,000+whp B-series engine. Text by Michael Ferrara // Photos by Jun Chen, Michael Ferrara and Richard Fong

TAKING IT TO THE STRIP 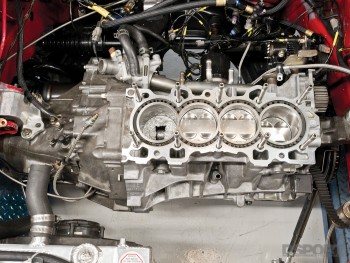 While chassis dynamometers are invaluable tools to gauge performance, the dragstrip has no equal. A dragstrip determines not only which car makes more power, but also which car puts the power to the ground more efficiently. When trap speeds aren’t artificially inflated by excessive wheel spin, one can determine the horsepower of the vehicle based on vehicle weight and trap speed. In the case of a 1,000whp Honda at a 2,450 pound competition weight, a trap speed in the neighborhood of 170 mph is to be expected. With the DSPORT Project FAME Civic, we expected to see trap speeds in the neighborhood of 170-180mph based on its power and weight. [pullquote]THE TRAP INDICATED THAT THE CAR WAS ONLY DELIVERING ABOUT 600 OF IT’S 1,000+ HORSEPOWER[/pullquote]The first pass was a high 9-second pass that only managed mid-130s in the mph department. The car felt like it was blowing off the tires in First and Second gear and coasted the rest of the run. After making some adjustments to boost targets for first and second gear, we made another pass that showed some improvement. The vehicle managed an almost-respectable 1.581-second 60-foot time while delivering only a 9.571-second effort at a trap speed of 146.26mph. It felt as if the engine was still overpowering the tires in First and Second, but was now way off on power in Third and Fourth. The trap indicated that the car was only delivering about 600 of its 1,000+ horsepower to the ground. What was the problem? 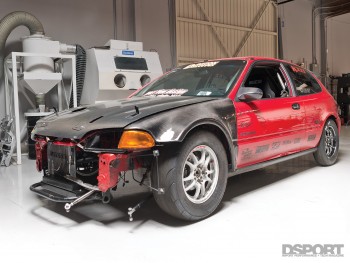 After reviewing the MoTeC M800 datalogs, two problems were soon identified. One problem was causing an excessive amount of power to be delivered in First and Second gear, another problem was causing the power to be severely limited in Third and Fourth gear. Our first problem was the result of the MoTeC ECU not correctly establishing the gear in use. Apparently the factory wheel speed sensors that provided the ECU the driven wheel and non-driven wheels speeds wasn’t able to provide good data to the ECU. As a result, the ECU believed that we were in third gear when we were only in first or second gear. This would cause the M800 to deliver more boost in first and second gear which caused the overpowering issue. Unfortunately, the fix for this would require wiring in the vehicle speed sensor (a hall sensor driver from the ring and pinion inside the transmission) and we simply weren’t equipped to do this properly at the track. [pullquote]THE BOOST TARGET WAS SET TO 55 PSI, NOT 40 PSI AS IT SHOULD HAVE BEEN[/pullquote]The second problem was a bit harder to identify. On turbo engines, it’s generally accepted that an engine making boost is an engine making power. In looking at our datalog from the earlier run, our engine was definitely making boost. In fact, too much boost. We had calibrated the engine up to 42psi on the dyno and now we were seeing up to 55psi in Third and Fourth. Yet, the car was accelerating like boost was only at 20psi. What had happened? After some closer examination of the logs and calibration files, we discovered the problem. The boost target was set to 55psi, not 40psi as it should have been. So wouldn’t that make more power? In our case, “No.” From 45psi and above on our fuel map and ignition map was purposely set “pig rich” while the ignition timing was retarded back to 5 degrees. This was done as a safety measure in case boost pressure went into this danger zone. On one hand, it was nice that we were able to confirm that this “safety zone” worked properly. On the other hand, we couldn’t wait to see what the DSPORT Project FAME Civic could do with all 1,000+whp at the ready. This was to be answered on the next run. Based on the conditions and the data we had from previous runs, an 8.85-second pass at 175mph was our expectation. 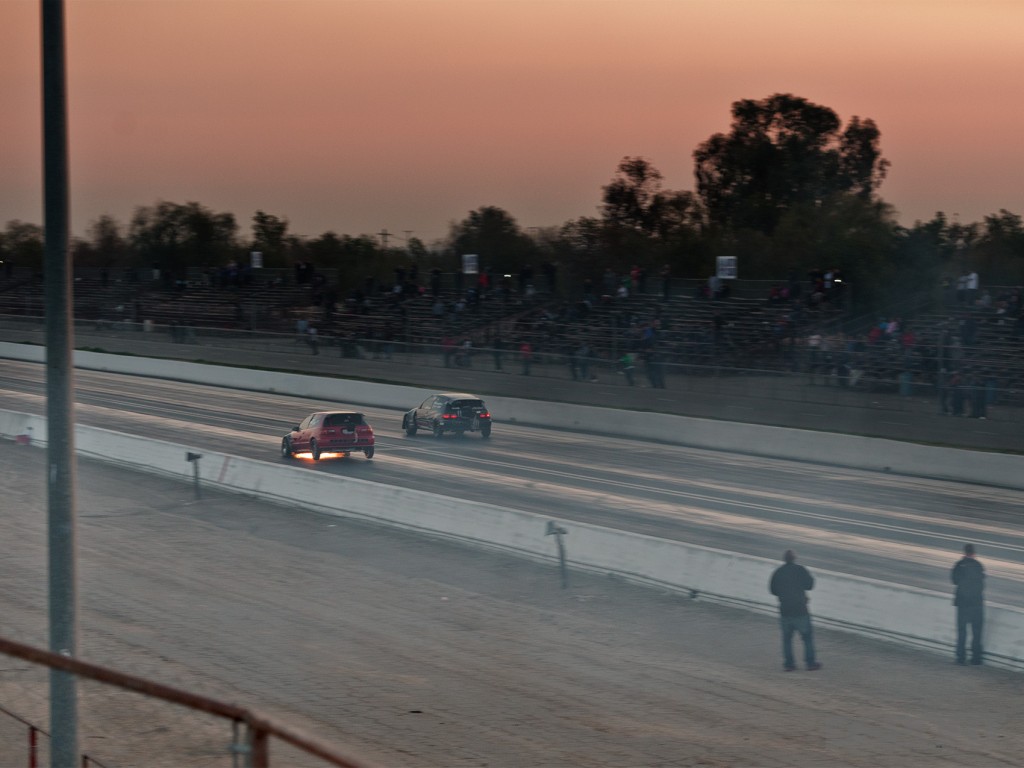 While the car and engine were now programmed and ready to deliver the number, our driver was not. In one of those “what the Hell did I just do moments,” the driver missed the 2-3 shift and instead shifted the car back into First after reaching 10,700RPM in Second. The world’s most unwelcomed downshift forced the B-series to 16,000 RPM as the entire vehicle literally endo’d. The rear tires lifted off the track as the front bar of the car made contact with the pavement. Sparks in the form of 12-foot rooster tails scintillated from under the vehicle. Fortunately, nothing exploded (externally) and no one was hurt. The engine was not so lucky. It was time to teardown the engine to assess the degree of the damage. 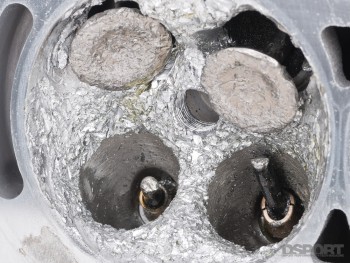 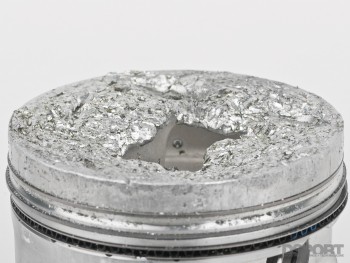 The insane engine speed destroyed the valvetrain first in cylinder number four. This damage caused foreign objects to make their way into all four of the other cylinders and the exhaust manifold. The Port Flow Design ported cylinder head and its accompanying Supertech valvetrain were a total loss, as were the pistons, one connecting rod and one of the sleeves. The crankshaft was also slightly bent. On a positive note, the design of the Darton M.I.D. sleeve meant cylinder repair would be easy (see sidebar, next page).

Currently, we’ve put further development on the DART-based shortblock on the back burner. This decision was made after excessive bearing wear issues plagued our DART development engine. At one point this led to a spun number-four rod bearing. While this is a very early-production DART block, we cannot find a visual clue as to why the block is consistently producing accelerated bearing wear. We hope to find an answer soon, as we would love to use the tall-deck versions of the DART B-series for some 2.1-liter stroker performance. For those following the build from the start, we did test the valve sealing issue on the closed-deck DART block. It was believed that the closed-deck design of the DART block would minimize the pressure and distortion that causes the number-one cylinder valves to leak when the head is torqued to 100 lb-ft. In actuality, the closed-deck of the DART block didn’t eliminate the issue. The issue is inherent in the factory Honda Bseries cylinder heads themselves (both GS-R and B16 variants). 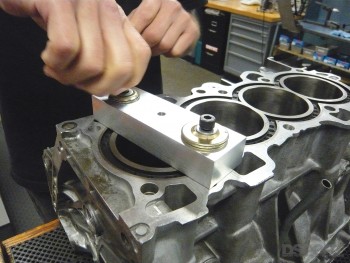 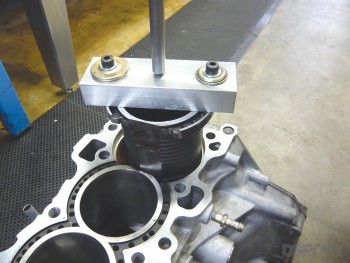 While we are working on determining the cause of the unidentified oiling issues on the DART engines, we opted to move over to an OEM Honda B18C block fitted with Darton M.I.D. sleeves. To date, this combination is surviving the power levels without any signs of accelerated bearing wear. In addition to thriving and surviving, we are now benefiting from the serviceability of the M.I.D. design. 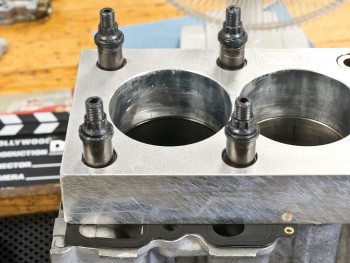 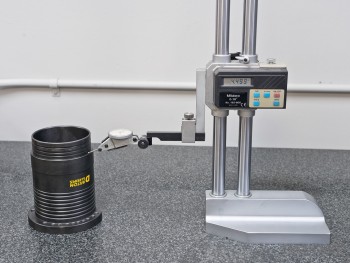 When most engines are destroyed, additional upgrades are typically made in addition to the required repair. In the case of our B-series, there is nothing to indicate that we should change anything with our performance combination. When kept within its operating parameters (under 45 psi of boost pressure and under 10,800 rpm), the Darton M.I.D. sleeved block, ARP fasteners, CP Pistons, Carrillo rods, SCAT crankshaft, Supertech valvetrain, Web Cams, Full-Race andd BorgWarner turbo combination has done everything we asked and more. Simply getting it back together and ready to go will make it a force in the 72mm turbo class limited IDRC Pro FWD class. Now the only question is which DSPORT project will run 8s first? Project RH8 R33 GT-R or Project FAME Civic?