You are at:Home»The Cars»Features»Twincharged Power on a Carbon-fiber Widebody Exige

Addressing fuel delivery became the next focus of the build. Expecting to make over 400 horsepower to the wheels while carving canyons and switchbacks would require larger injectors and an improved fuel-delivery system. 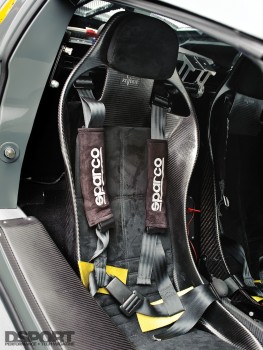 A Walbro 255-lph in-tank pump supplies fuel to a custom Ronin/SF fuel surge tank. The surge tank acts as a fuel-supply buffer, defending against fuel starvation while taking hard corners when the fuel usually sloshes away from the fuel pump. A SF custom fuel rail with fuel return ensures even fuel distribution to the quartet of Siemens 750 cc/min fuel injectors.

Proper tuning for higher boost pressures and larger injectors proved to be a challenge, as there were few engine management solutions available. Unwilling to employ a piggy-back fuel computer, Frank called up his friend Charlie Wallace (CharlieX) for assistance with the factory Lotus ECU. In only two months, CharlieX had cracked the ECU and wrote reflash software for the Elise.

Tested on a DynaPack dynamometer, the Exige delivered 413 horsepower and 302 lb-ft of torque to the hubs at 17 psi on 91-octane unleaded fuel. Compared to a stock Elise with 172 horsepower at the hubs, the compound-charged 2ZZ engine generated 140-percent more horsepower. But that may just be the tip of the iceberg, as CharlieX has already street tuned the Exige at 32 psi on 100- octane unleaded gas. At that boost level, Frank believes that 500~550 horsepower should be going to the wheels. 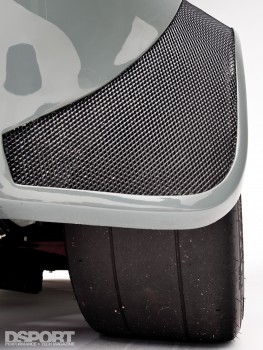 Poor luck and horrible road conditions forced the evolution of the Elise into an Exige. A big rig rear ended the Elise shortly after the initial supercharger installation. This was the perfect excuse to install an Exige rear clam, which gave more room for the chargecooler atop the engine. Later on, uneven road conditions damaged the front end, prompting the installation of a matching Exige front clam. Once horsepower levels exceeded 400, traction became an issue, leading to the implementation of larger tires. But fitting 285/30R18 tires under the rear clam would require more than a facelift. The Lotus went to Specialty Car Craft for some cosmetic surgery. With styling cues from Frank, a custom carbon-fiber wide-body kit added valuable inches to the sleek skin of the Lotus. Mesh screen behind the rear tires relieves the drag-inducing pressure that usually builds up behind the rear tires. 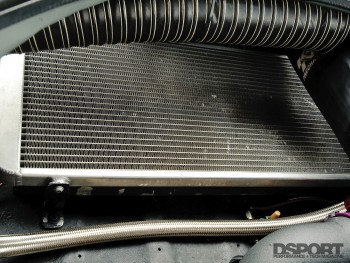 Typical front-engine layouts easily accommodate front- mount intercooler options to make best use of the front of the car for heat exchange. However, in the case of a mid-engine layout, running charge piping the length of the car from the engine to the front bumper is not a viable option. One alternative is an air-to-liquid intercooler. This system uses one heat exchanger to cool the charge air with the liquid while a second heat exchanger uses the ambient air to cool the water. While these system add some complexity and weight, they eliminate the need for 20-feet of charge piping.

Aiming for the Record

A reactive approach to tuning proved to deliver the goods, as Frank enjoys the Lotus each day. Reaching a level of satisfaction for a perfectionist is no easy task, but a rewarding one when achieved. Frank comments, “I didn’t really set any goals when I first purchased the Elise other than to take it up to the canyons like I did with my old Group B rally cars. Now that the car has evolved into a unique and capable performer, it’s probably one of the fastest cars that everybody said wouldn’t work. With the carbon wide-body in place, there’s a bit of aero work that needs to be completed before we go Willow Springs Raceway to turn a lap time that no other Lotus will probably ever match. Making the naysayers eat their words is a satisfaction that’s second to none.”