As the S2000 continued to improve on track, the naturally-aspirated F22C engine simply could not keep up with higher-powered cars on the straight sections. Therefore, Tang dropped the car off to CT Engineering for a forced induction solution. But first, the block needed to be fortified. Starting in the block, the cylinders were honed before a set of Supertech pistons took their place in the block. With the shortblock completed, attention shifted to the cylinder head. The head received a complete Supertech valvetrain lifted with BC Brian Crower Stage-2 camshafts. The longblock was then assembled with ARP head studs. 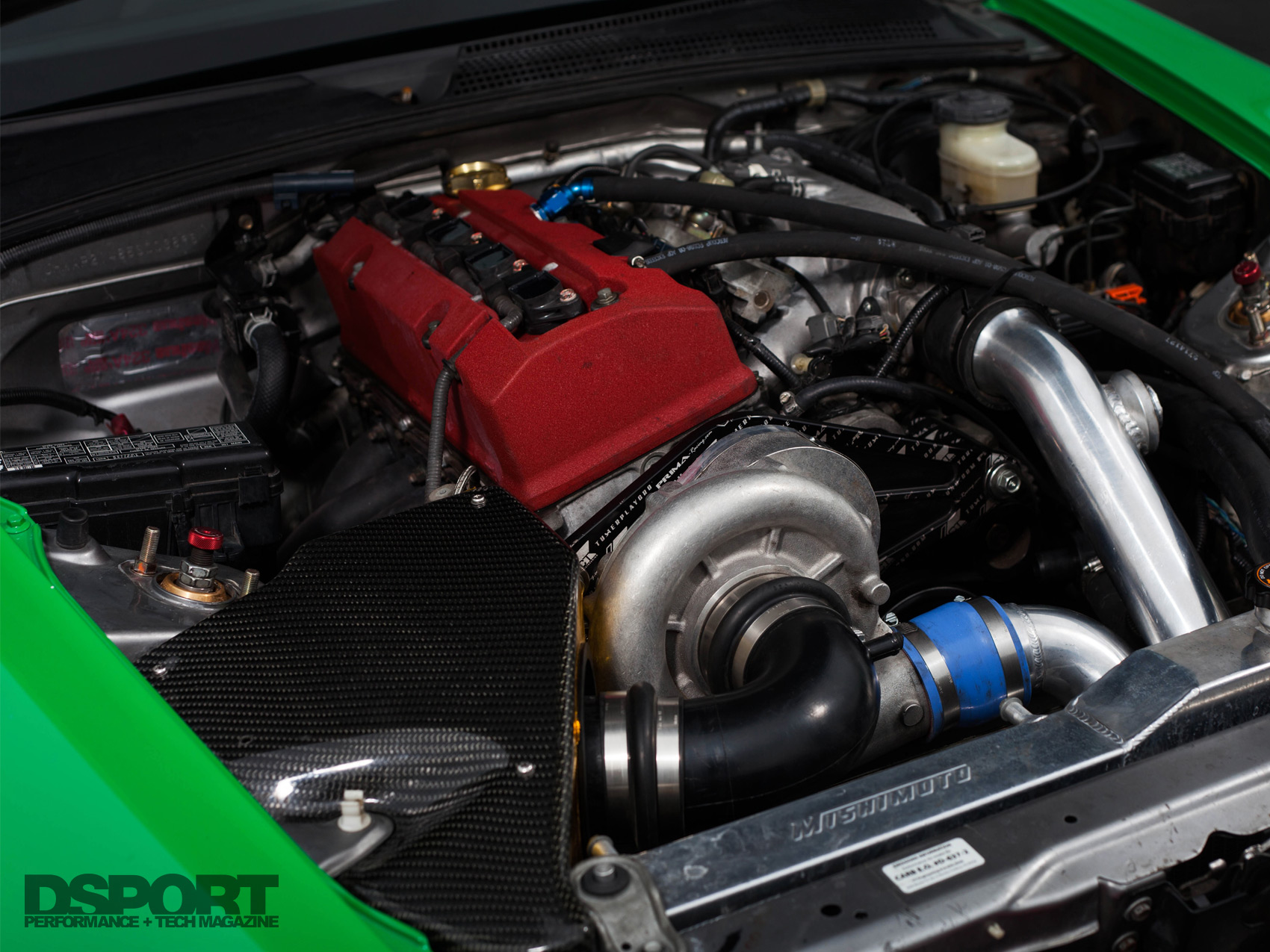 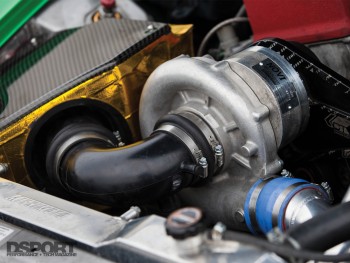 The fortified longblock was finally ready for boost pressure. CT Engineering installed its supercharger solution, based on a Paxton Novi 1220 centrifugal supercharger. The air charge leaving the compressor flows through a Primaintercooler before being distributed to the intake ports. As the charge enters the combustion chambers, DeatschWerks 1,000 cc/min injectors atomize VP Racing 100 octane unleaded fuel into the air stream. To regulate the injectors, a Hondata K-Pro engine management solution was selected for the duty. With Blacktrax Performance’s Jei Chang making adjustments to the fuel and ignition tables, the S2000 generated 400 horsepower and 253 lb-ft torque to the hubs of a Dynapack dynamometer. 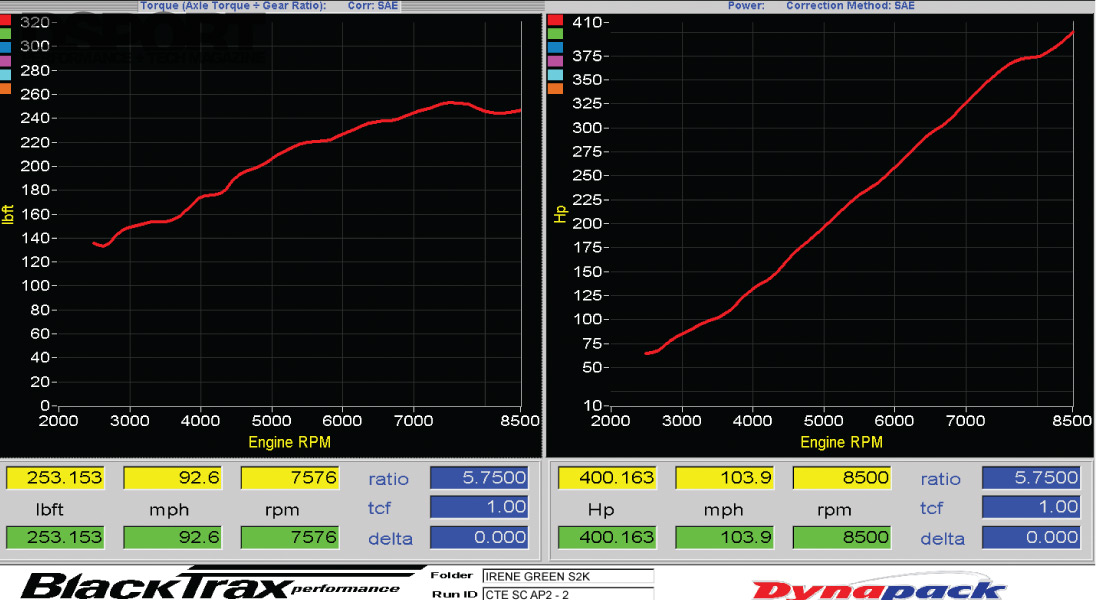 With additional horsepower come increased speeds. But carrying higher entry speeds into the turns also requires improved braking. Having taxed the capacity of the factory stoppers, Tom turned to Wilwood for a performance solution. That solution came in the form of a set of Wilwood FNSL6R four piston calipers squeezing Carbotech XP12 pads against 12.88-inch slotted rotors. The increased heat capacity of the rotors combined with the Wilwood calipers and XP12 pads helped to shed speed quickly, permitting later braking and subsequently, quicker lap times.

Now ready to take on the competition, Tang wanted to put Irene to the test atthe 2012 Global Time Attack Finals at Buttonwillow International Raceway. Having made dramatic improvements to the car, the track testing leading up to race day seemed promising. Tang recalled, “With Andrie at the wheel, the morning practice looked to validate everything that we’d worked hard for, but then our transmission blew on the first hot lap and we lost 4th gear. This failure prevented us from recording an official lap time when it counted, which would have been in the low 1:53 to high 1:52 range based on the sector times that Andrie put down while warming the car up and becoming familiar with track conditions. It was truly heartbreaking for all of us, since the tight competition schedule didn’t allow enough time to really do anything about the problem. We were done for the day before it had even truly begun. But hey, that’s racing right?” 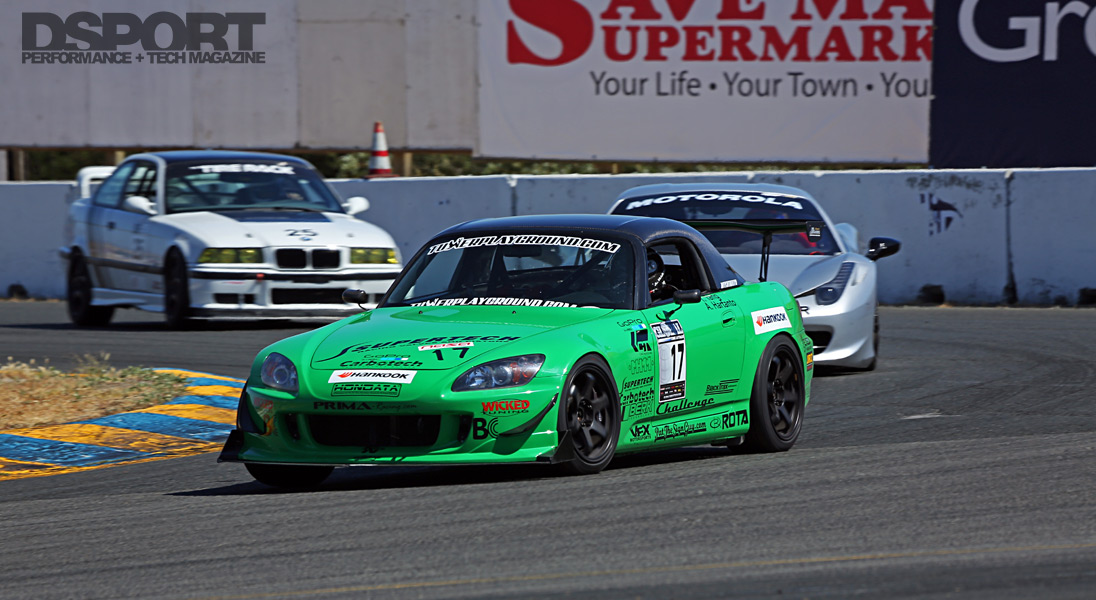 Although Irene never got to demonstrate her full potential, Tang is back in the garage seeking a transmission solution to get her back on track. When asked what his future plans were for the car, Tang responded, “I’m still undecided as to what direction I want to take with my S2000 in 2013. But so far, transmission notwithstanding, the car worked well because everything on the car functioned in unison. I will definitely be campaigning the S2000 in time attack, I’m just unsure as to which class(es) at the moment.” With nothing but the correct parts and proper guidance, Tang should effectively move forward in his racing endeavors. 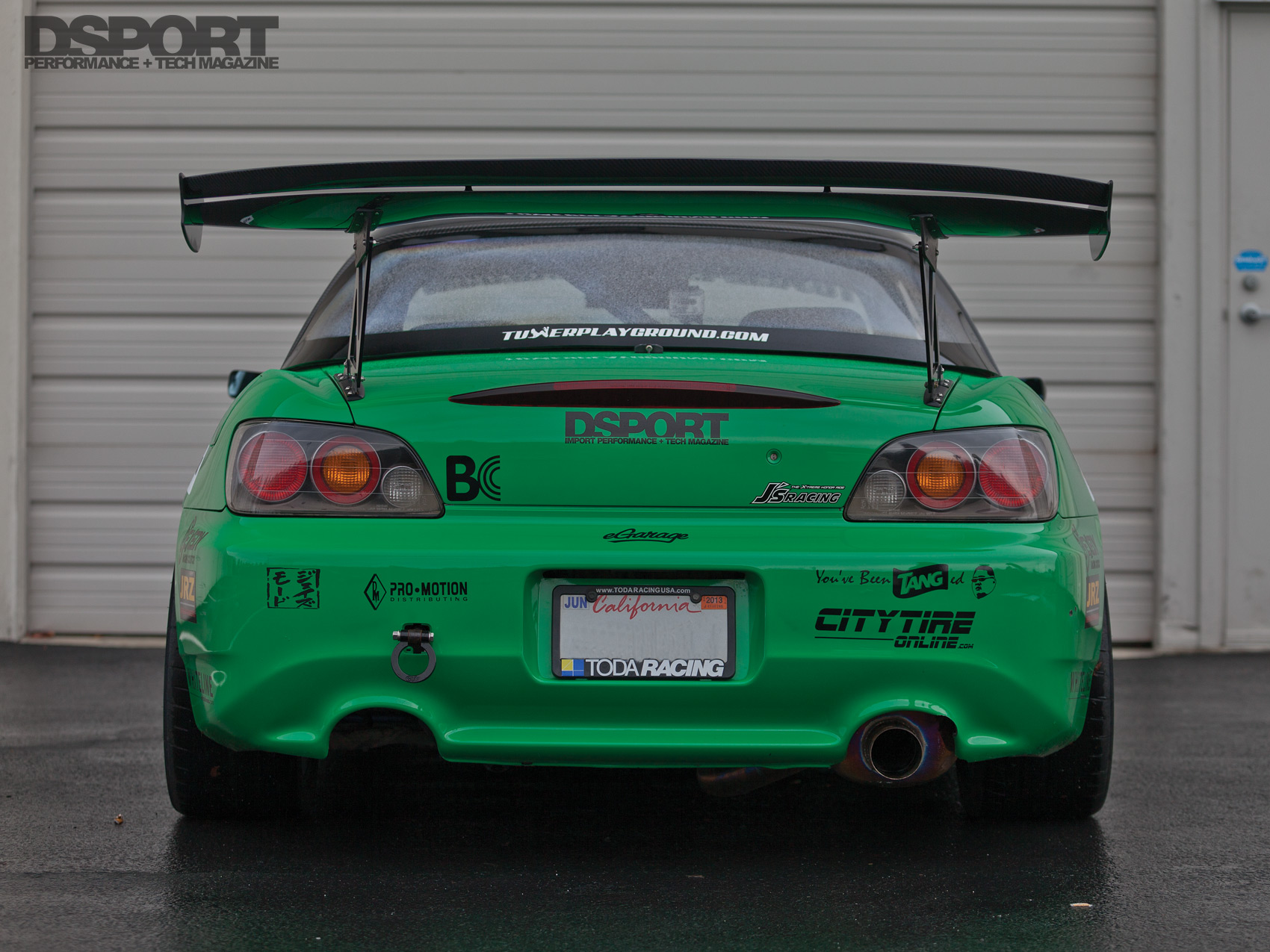