Your average internal combustion engine may sound smooth and composed from the outside, yet the internals work constantly to generate a series of explosions that set metal components into motion at a high rate of speed. Sure, an engine must be tough in order to produce hundreds or even thousands of horsepower. Yet the smallest inconsistency in timed motions, materials or fluids can reveal that engines are more delicate than you might think.

Before digging into the fuel system, it is best to gain a basic understanding of fuel itself. Although plenty of manufacturers have developed a countless number of fuel options for motorsports, your basic and most accessible fuel is found right at the pump. These fuels may not be some leaded concoction of magic potions only sold in expensive pails and drums, but these gasoline and ethanol options can deliver plenty of performance to a properly tuned vehicle. Gas pumps may encourage you to believe that the available options range from “regular” to “premium,” but these are not the labels to base your purchasing decisions on. Instead, look to the octane ratings for direction. These ratings specify the fuel’s resistance to spontaneously igniting or knocking. Despite what you may hear, filling up with a higher octane fuel than recommended provides little benefit. Running a lower octane than recommended, however, can lead to knocking and potential damage to your engine. For this reason, use only what is recommended by the manufacturer or by your tuner. 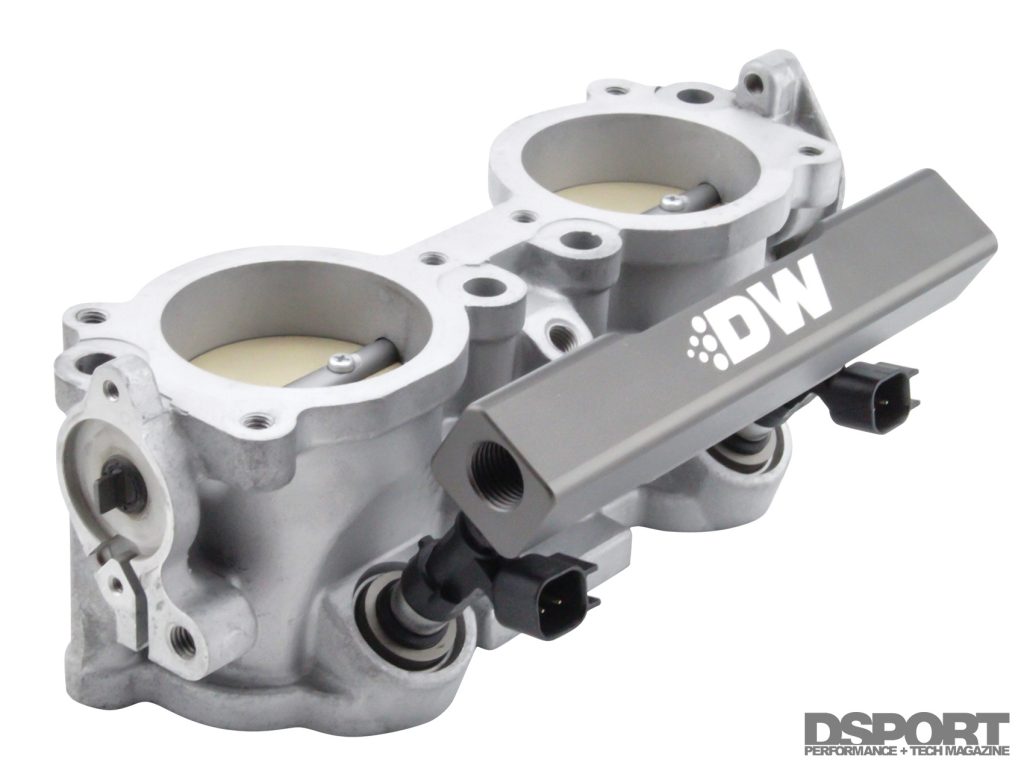 Fuel rails come in many shapes and sizes, however, it’s typically best to stick with the same or similar configuration as factory equipment to ensure fitment.

E85: Not for Everyone

If you’ve ever visited a racetrack, there’s a good chance you’ve taken a whiff of the sweet scent that is burnt ethanol. On the street, ethanol has gained traction toward becoming a highly popular alternative to gasoline. Under the label of E85, which represents the fuel’s 85-percent denatured ethanol and 15-percent gasoline blend, this option delivers lower emissions and potentially more potential for power than gasoline, depending on the vehicle and its tuning. This extra power can be found due to E85’s higher octane equivalent. Although E85 comes with some great benefits, this fuel type isn’t for everyone. First, higher concentrations of ethanol such as in E85 corrode materials like aluminum and rubber, both of which are found in a majority of factory fuel systems. Once your injectors, lines, pumps and other components are converted to ethanol-friendly counterparts, you still may have trouble finding a fuel station that sells E85. Some flex fuel kits and vehicles can run on any ratio of ethanol to gasoline, but it may be hard to justify converting your car to flex fuel if the nearest E85 station is 500 miles away. Once you’ve established what sort of fuel to feed your engine, it’s up to the vehicle’s fuel system to deliver it properly. 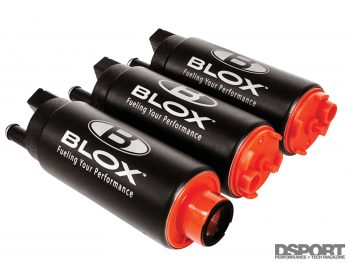 Two factors are charged with moving fuel from the tank all the way to the combustion chamber: pressure and volume. The fuel pump makes this delivery possible, sending pressurized fuel to the injectors. Selecting which pump best fits your needs depends on how much power your car makes and how much you might want it to make in the future. First, you have the option of an in-tank pump or an external pump. Although external pumps are more accessible and can potentially support greater volume and pressure, in-tank pumps generally run quieter, stay cooler and last longer. Next, account for how much fuel is needed to properly satiate the target horsepower. Sizing up fuel pump demands requires calculating the “total horsepower” of the engine itself. This number represents the flywheel horsepower plus the parasitic horsepower used by the vehicle, including items like the air conditioner compressor, alternator, water pump, power steering pump and other engine-driven accessories. This is performed by the following equations.

For Naturally-Aspirated and Turbocharged Engines:

With the total horsepower known, be on the lookout for a fuel pump designed to support a minimum of that calculated number. Keep in mind that E85 and ethanol blends demand approximately 1.5-times more fuel volume than gasoline, and methanol applications ask for twice what gasoline requires. While most tuners assume a base pressure of 43.5psi or 45psi, forced-induction applications require additional pressure proportionally to boost pressure. For every 1psi increase in boost pressure, assume the need for 1psi more in peak operating fuel pressure. Although electric fuel pumps dominate most of the automotive world today, mechanical pumps aren’t completely left behind as a thing of the past. Electric pumps typically deliver a wider variety of flow rates and pressure outputs, but some tuners prefer mechanical pumps as long as they can still meet fuel demands. In this sort of situation, a mechanical pump can prove more beneficial due to its simpler functionality and the extra reliability that comes as a result. 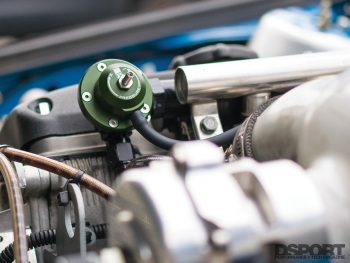 Inside a Fuel Pressure Regulator 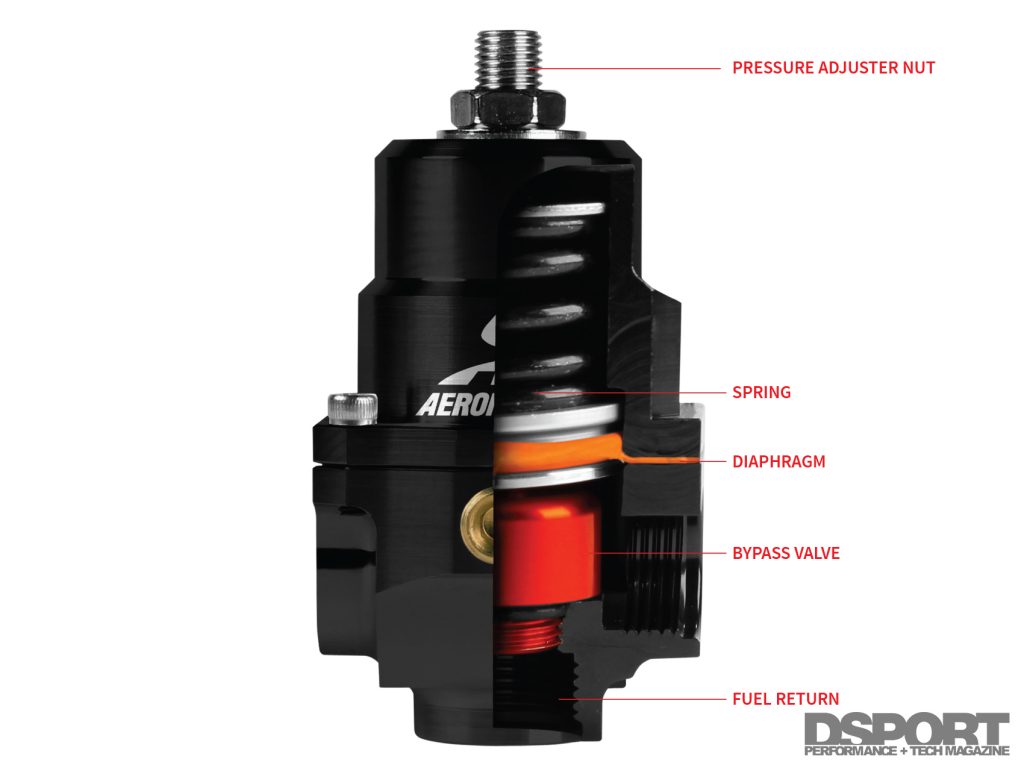 A fuel pressure regulator is a mechanical component that works with the help of vacuum to control a spring, diaphragm and check ball in order to regulate fuel flow. For return-type fuel systems, the regulator allows excess fuel to bypass back to the tank.

Once the fuel leaves the tank through the pump, sifts through the filter and flows through the lines and regulator, it needs a way to reach the combustion chamber. This process starts with the fuel rail. This component, maintaining a constant pressure via the regulator, distributes fuel to each of the injectors. Before digging too deep into flow rates and impedance, determine the fitment requirements. Injectors are available in top-feed and side-feed configurations, top-feed being the most common in factory setups. However, not all aftermarket top-feed injectors can replace the factory ones, nor will all side-feed injectors fit in place of the original components. Lengths, diameters and clips are not universal, so always ensure beforehand that the upgraded injectors you saved up for will fit properly. 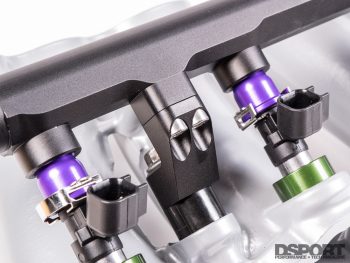 These injectors are the final step before the fuel reaches the combustion chamber, placing perfect timing and fuel volume high on their design priority list. Most OEMs utilize high-impedance injectors, also known as saturated fuel injectors. These require a 1A to 1.5A current signal in order to open, and remain open until the signal stops. This low amperage ensures lower operating temperatures and as an end result, better reliability. Low impedance injectors, also known as peak-and-hold injectors, receive a 5A to 6A signal in order to open. Once the injector opens, the current drops approximately 2-3A. Low impedance injectors open and close more quickly but also run hotter, hurting their reliability in the long run. Using one injector type in place of the other can potentially cause a failure in the injector drivers or in the injectors, so check their resistance before purchasing.

Like fuel rails, fuel injectors are available in many different configurations. Always make sure that your injectors not only meet fuel demands, but that they also physically fit properly.

With an effective fuel pump and pressure regulator supplying appropriate pressure, a set of injectors to match will ensure that the system doesn’t bottleneck before fuel reaches the combustion chamber. Since different fuels carry different weights, the volumetric flow rate (measured in cubic centimeters per minute, cc/min) is the ideal method for calculating the needed flow rate. Some manufacturers rate their injectors based on a mass flow rate (measured in gasoline per hour, lbs/hr), so you may need to get that calculator and notepad back out for some more math. In order to convert from mass flow rate to volumetric flow rate, use the following equation.

In order to determine the desired flow rate, you can use the following for a starting point. Determine brake-specific fuel consumption, or BSFC, which is typically 0.45 for unmodified high-compression engines, to 0.55 for highly modified engines. BSFC may sit higher at 0.55 to 0.65 for modified forced-induction engines. Determine safe duty cycle, which is 0.80 for most factory engines, 0.85 for modified engines.

Plug in the numbers

Inside a Fuel Injector 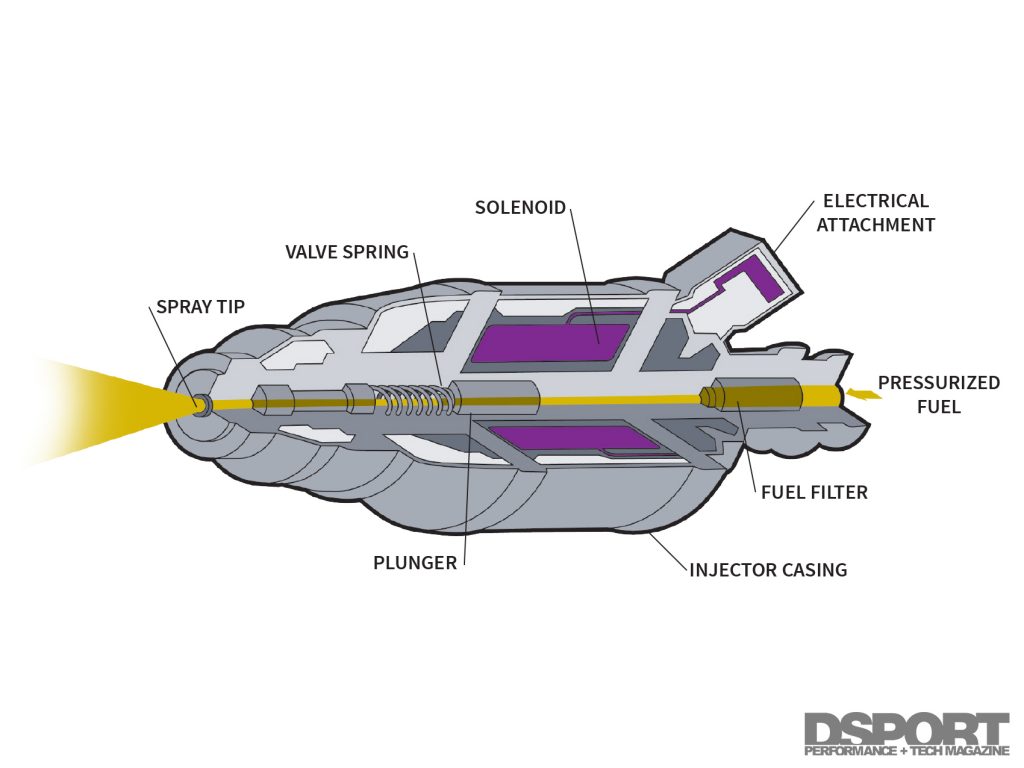 A well-functioning fuel injector ensures that just the right amount of fuel is delivered at just the right time. This is accomplished by an electrical signal sent by the ECU to send current to the solenoid, controlling the opening of the plunger. The pressurized fuel then flows through and out the spray tip, where the fuel is then atomized for combustion.

Selecting components to fill out your vehicle’s fuel system comes down to simply delivering enough fuel to meet the engine’s demands. Pumping more fuel and higher pressures than necessary won’t do you any good. However, starving the engine will surely result in reduced power and potentially damage it. In this system, every component is just as important as the other, as a single bottleneck anywhere in the chain of fuel delivery will choke out the engine. Sure, there’s some math, time and effort required in order to select the right parts. But with a little number crunching and proper planning for future modifications, you’ll be on your way to more power and a healthy running engine. 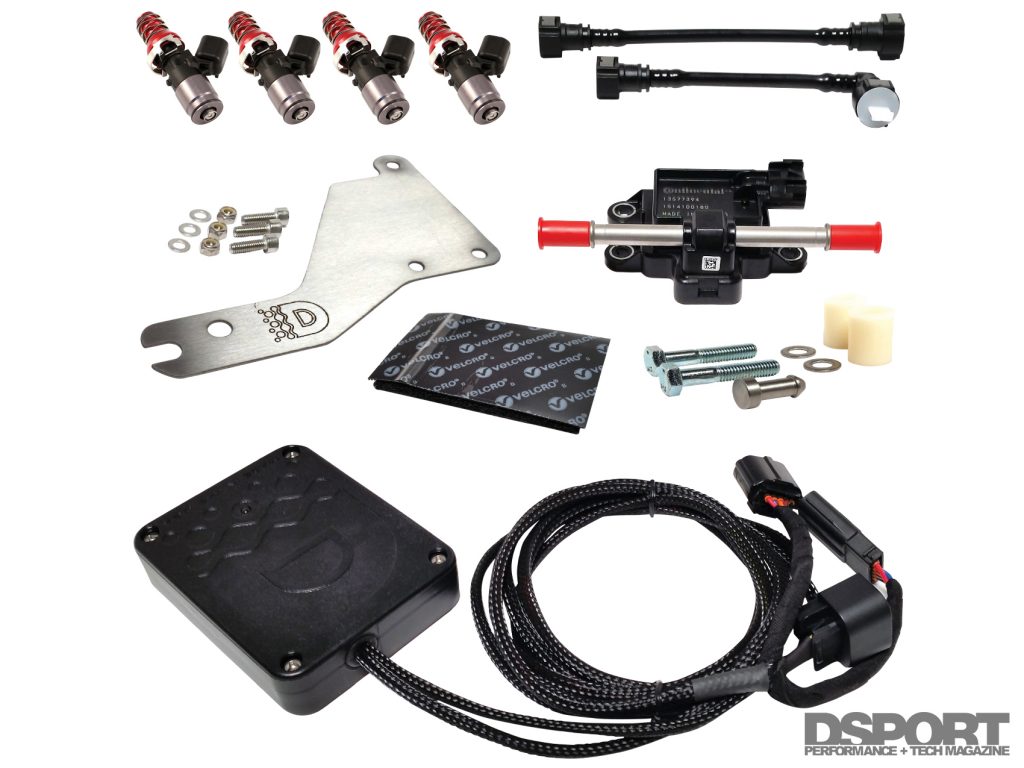 Some manufacturers and tuners offer flex fuel kits, providing a relatively simple means to make your car capable of utilizing the benefits of ethanol. 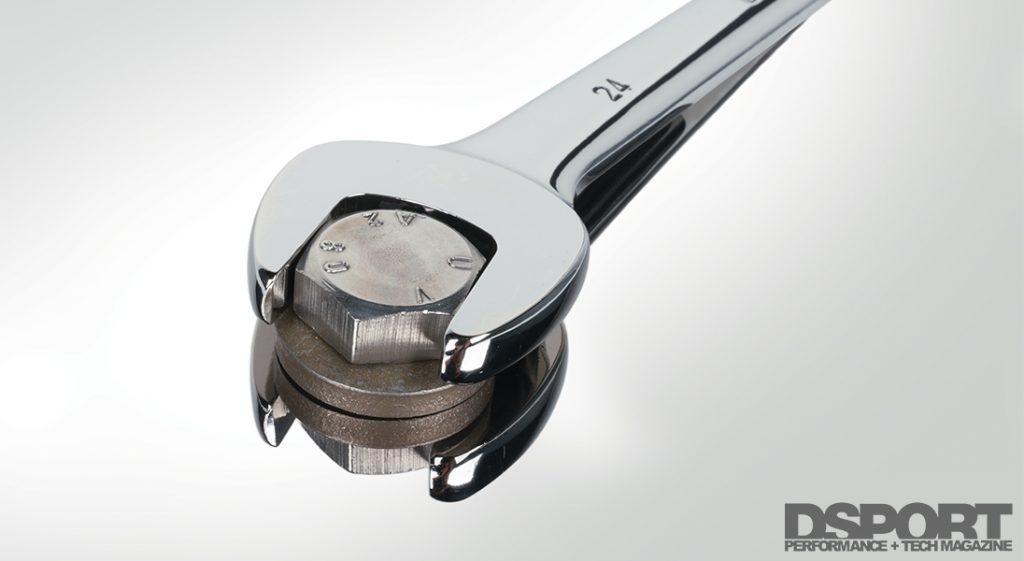