Is factory turbocharged performance superior? Can an aluminum block deliver the goods? Making the most of the SR20DET engine has been the focus of the D’Garage Silvia S15 project car from day one. With the introduction of our KA vs. SR Challenge, taking the head start that the SR20-powered S15 has and ramping up to further distance it from the KA- powered 240SX is now top priority. After four Test & Tunes and water/methanol injection, the SR20DET last generated 403 horsepower to the wheels. In addition, a JIC Magic suspension setup by Jon at Ziel Motorsports helped to improve the S15’s footwork. As the last of Nissan’s factory-turbocharged, four-cylinder engines, the SR20DET offered good horsepower capability and extensive aftermarket support. As for strength, some stock block examples have eclipsed the 500 whp mark with only a head gasket upgrade and the right turbo, fuel system and cam upgrades. Of course, reliability at these power levels and beyond can be addressed with the proper selection of upgraded internals. With this game plan nearly all of the Silvia SR20DET’s deficiencies can easily be addressed. Text and Photos by Richard Fong

Many SR20 tuners never go beyond an 87mm cylinder bore. This avoids the cost of re-sleeving of the block with aftermarket ductile-iron sleeves. However, it also means that the displacement increase is just about 47cc. Due to its generous cylinder bore spacing, an SR20DET when properly re-sleeved can support bore sizes up to 92mm (94mm for naturally-aspirated applications) with reliable performance. A 92mm bore SR20 will gain 289cc in displace- ment. When teamed with a 91mm stroker crank, the SR20DET can tip the scales at a 2,420cc displacement (more than a stock KA24 and just 23cc shy of a +1mm-bore KA24DET). Benson’s Performance Engine & Machine will resleeve the SR20 block with Benson Signature Gapless Sleeves bored to 92mm. A custom set of Mahle forged-aluminum pistons will fill the cylinders while Carrillo forged connecting rods will link the pistons and the TOMEI POWERED 91mm stroker crankshaft. This new displacement of 2,420cc is an increase of 422cc (21%). Soon, our SR24DET will no longer have a displacement complex as it will be within one percent of Jeren’s KA24DE. 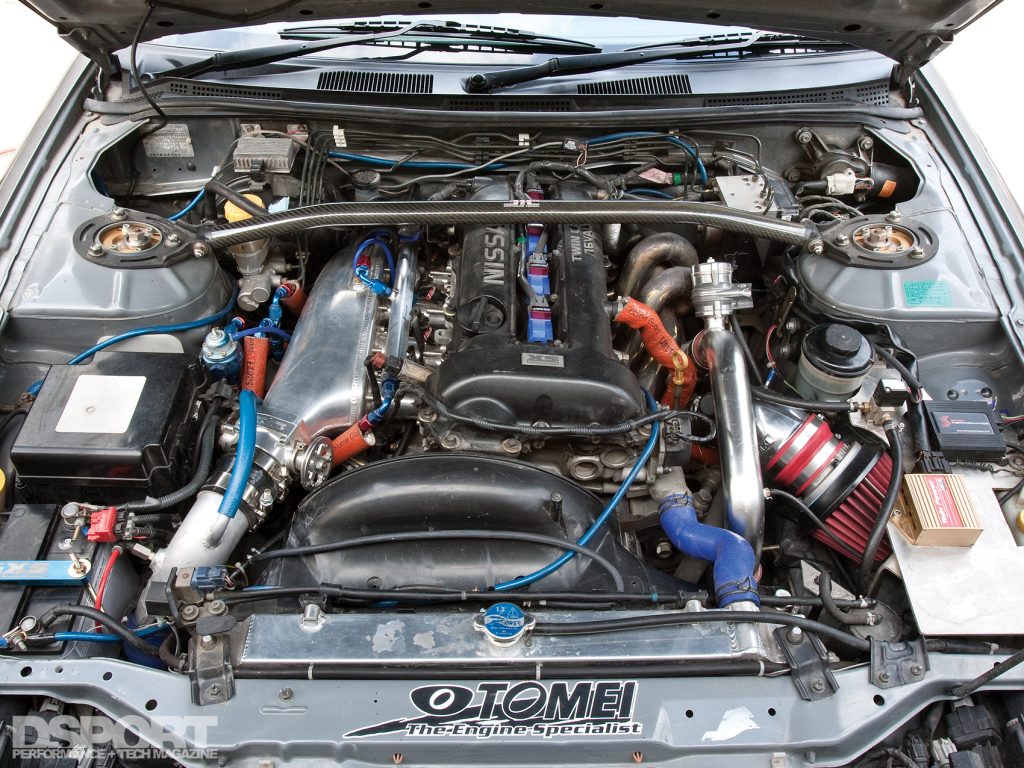 The later variants of the SR20DET (1995 and up) featured a revised cylinder-head design with variable cam timing on the intake side. This improved low- to mid- range torque production, adding power where the SR20 was lacking. To further improve airflow in and out of the cylinders, higher-lift, longer-duration camshafts must be employed along with valvetrain improvements. Our cylinder head will be hand ported and the combustion chambers reshaped for the 92mm bore by TOMEI POWERED before receiving a full complement of TOMEI POWERED valves, springs, retainers and solid lifters. Since the factory valvetrain relies on rocker arms with self-adjusting hydraulic lifters, there is no need to adjust for valve clearance when used with mild cams. But the shortcoming of this valvetrain is the potential for the rocker arm to be thrown from its position on the lifter, leading to catastrophic engine damage. For high-lift/long-duration camshafts and a higher redline, the solution is to switch from hydraulic lifters to solid lifters. This requires shimming of the rockers in order to attain proper valve clearance. But the reward is well worth the effort, as maximum engine speed will now be limited by the rotating assembly and not the valvetrain. TOMEI POWERED 270- degree camshafts with 12.5mm lift will actuate the valvetrain and facilitate increased airflow in and out of the cylinders. 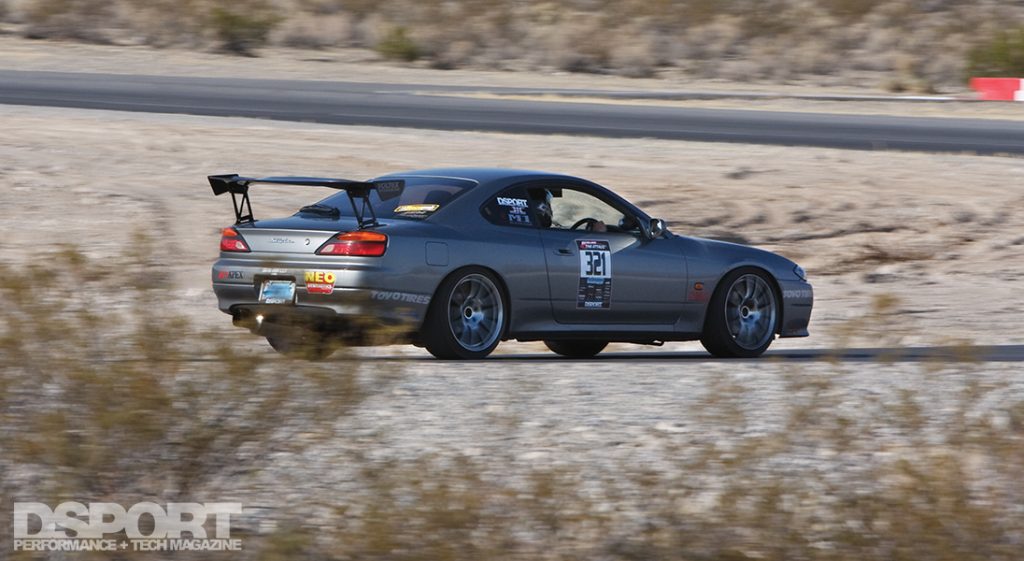 The best complement to the increased displacement is a larger turbocharger. A Peak Boost top-mount turbocharger manifold will channel the exhaust gasses to the turbine inlet of the new turbocharger. Since the horsepower targets for the KA24 vs. SR20 competition are in the range of 550 horsepower, a yet- to-be-chosen T3-frame turbocharger will be the spec power-adder for the engines. With additional displacement and improved volumetric efficiency, the SR24 should easily generate the enthalpy necessary to drive the turbo efficiently to the target horsepower levels.

Gearing Up For Battle

The anticipated horsepower and torque levels that will be generated will require additional clamping force at the flywheel in order to effectively convert power at the crank to power at the wheels. A twin-plate racing clutch will take its place within the transmission bell housing to ensure reliable power transfer. Knowing that both circuit and drag competitions is around the corner, getting the power to the rear tires reliably is a must. Stay tuned as the saga continues in this heated battle of the brothers. 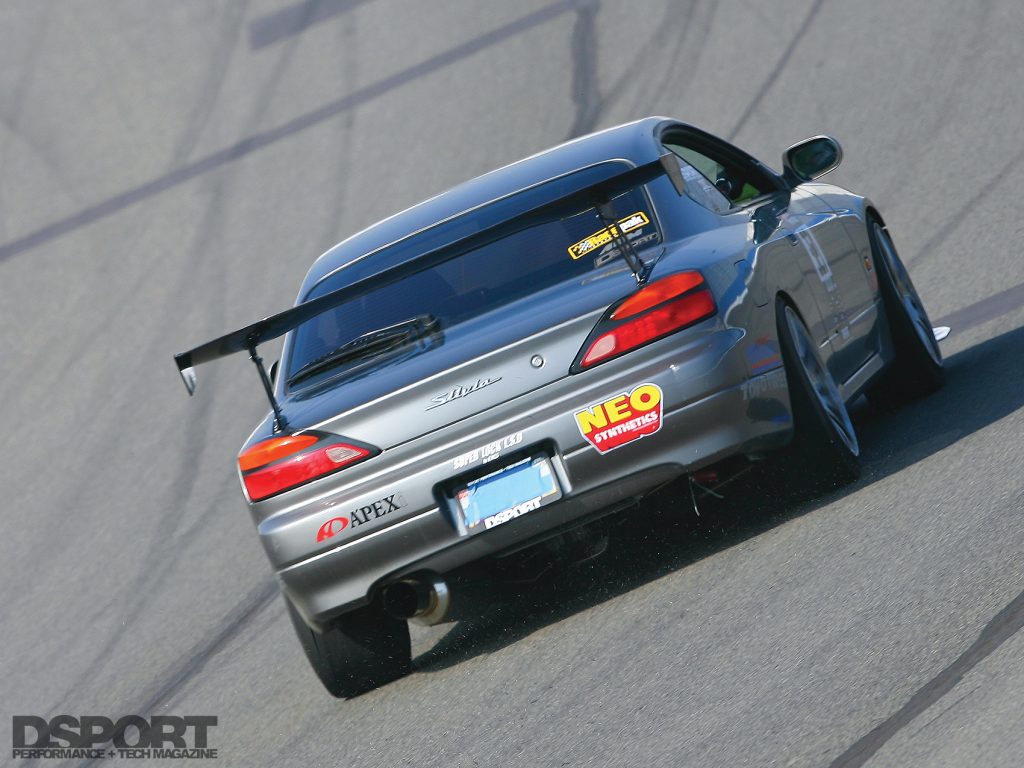 Whiteline adjustable sway bars replaced the factory units and help to reduce body roll despite the stiffer springs. When the Silvia received a complete suspension upgrade composed of JIC Magic coilovers and adjustable links, the handling improved dramatically. While the stiffer springs (10 kgf/mm-F, 12 kgf/mm-R) do a great job of keeping the tires planted and limiting body roll, they now overpower the factory sway bars, practically neutralizing their effect on the suspension. Sway bars reduce body roll during hard cornering to keep all four tires planted through each turn. By reducing body roll, weight shift can be better controlled and traction in the turns can also be improved. We turned to Whiteline Automotive for a performance solution. Whiteline recommended its heavy duty 27mm front sway bar and 22mm rear sway bar for the job. These sway bars add adjustments for stiffness to tailor and refine the S15’s suspension. 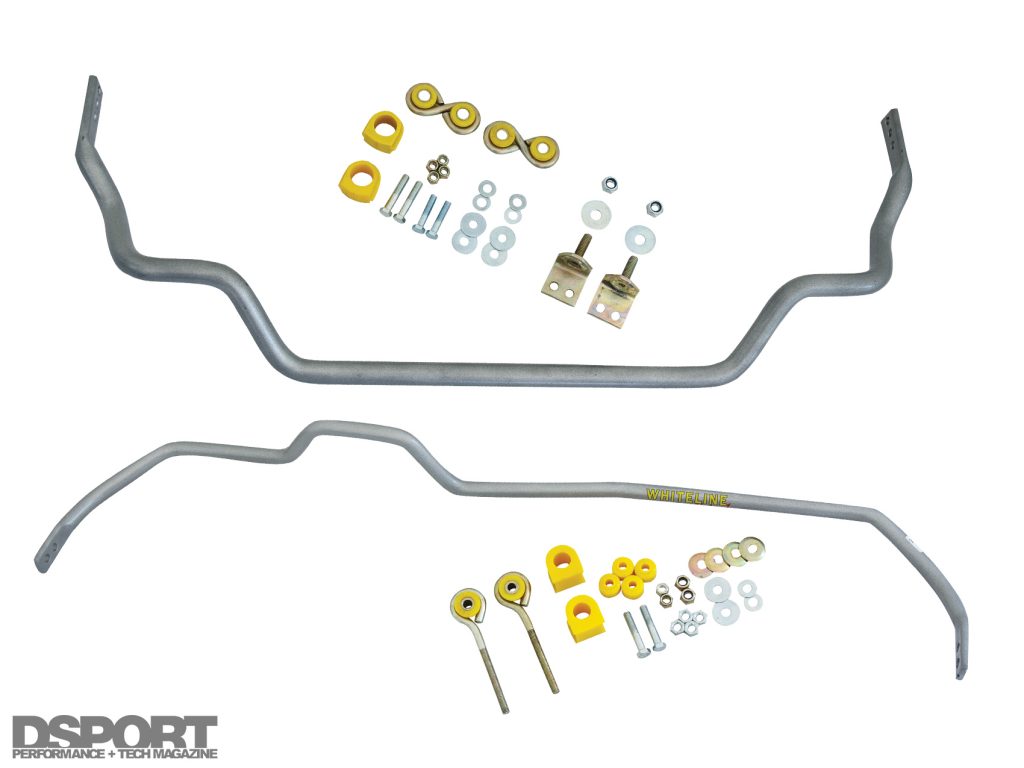 An often misunderstood area of performance is aerodynamics. Some think that simply adding a wing will magically create the downforce necessary to plant the entire chassis around a racetrack. This is far from the truth. Too much rear downforce can be as detrimental to performance as too little. Proper tuning requires a balance in both the front and the rear. While spoilers and wings are nothing new, the evolution of front-end aero has benefitted from technology to increase frontal downforce. Splitters, lip spoilers and canards (or winglets) significantly increase the downforce over the front tires while three-dimensional carbon- fiber wings take full advantage of the air flowing over the roof to generate additional downforce over the rear tires. When combined, the extra downforce over all four tires can improve handling, power delivery and ultimately lap times. To add downforce over the rear tires, a Voltex Racing Type- 2 carbon-fiber wing was mounted atop the trunk lid. This wing features a variety of wing-angle adjustments to increase or decrease the amount of downforce applied. Utilizing APR Performance support rods, we cut a sheet of Alumalite and mounted it to the front bumper to act as a splitter. Together, these components increase downforce over the tires and balance the handling of the S15. 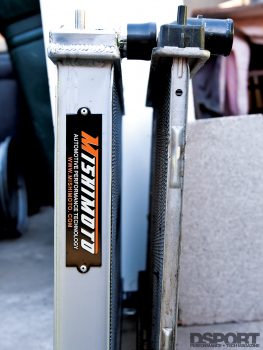 After participating in several track days, it became apparent that the Silvia’s cooling system needed help. Watching the temperature gauge climbing higher with each lap, a quick check of the Power FC Commander verified the temperature: 108- degrees Celsius. For the SR20, this is very close to critical temperatures, proving the stock radiator inadequate for the rigors of the track. To upgrade the system, a larger-capacity Mishimoto aluminum radiator and a GReddy air separator tank were teamed to increase the transfer of waste heat from the coolant. (Right) The Mishimoto radiator is clearly thicker than the stock unit for increased capacity and features aluminum end tanks.

(Left) A Mishimoto universal oil cooler kit was incorporated, providing another means of heat dissipation from the engine.  (Right) GReddy’s air separator tank helps to purge the pockets of air that inhibit heat transfer from the engine to the coolant.

Is a Diff Just a Diff?

All cars rely on differentials, but not all differentials are the same. Typical factory differentials are “open” or non-limited-slip differentials. These are generally adequate for a street car, allowing left and right drive wheels to turn at different speeds when making turns. However, the weakness of the open differential is apparent when drag racers have a “peg-legged” launch, where only one tire is gripping and the other is just spinning. A similar phenomenon occurs for the track driver that is trying to shave seconds off the clock but power delivery to the ground is inconsistent and feels a little “lazy”. For the drifter, initiating and holding drift becomes virtually impossible since the tire with the least resistance will get all the power and the other wheel will simply try to grip. 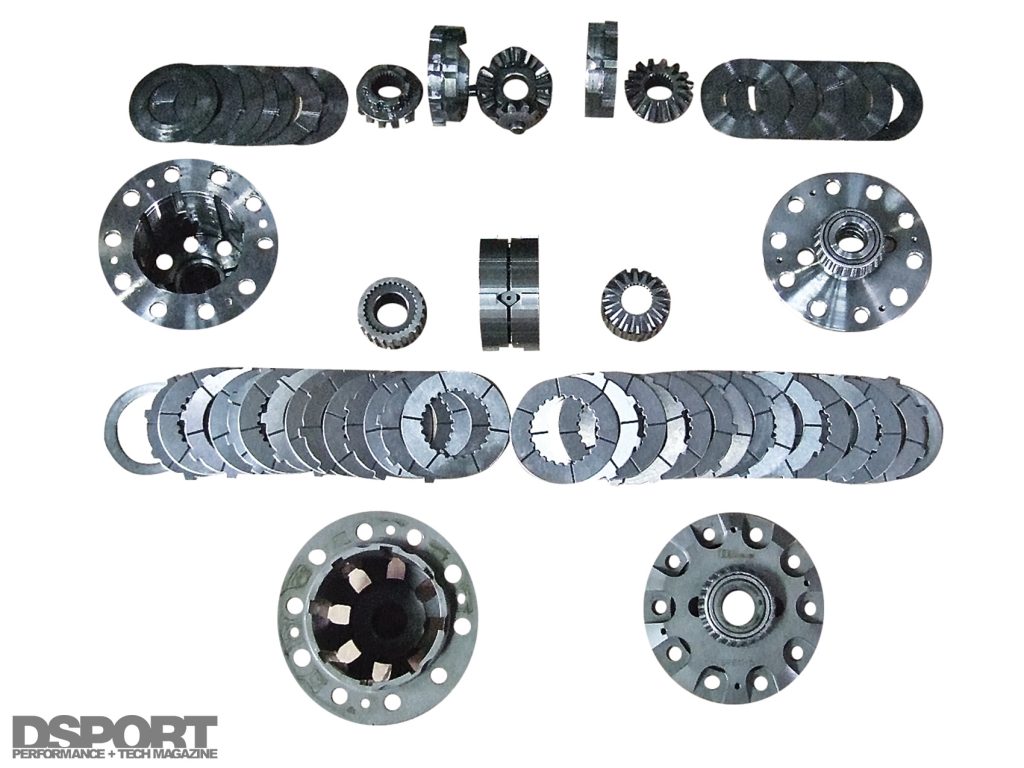 OS Giken in Okayama, Japan engineered its own differential design, addressing the known short- comings and producing the Super Lock LSD. OS Giken states that the clutch pack-style Super Lock LSD incorporates more discs than any other LSD on the market, making this differential a true 100-percent locking LSD. Because of the fully- locking design, less heat is generated as well. In addition, this design allows for customizable lock timing to suit any driving style in any motorsports arena. The Super Lock LSD features a pressure control ring which facilitates a smooth response to the initial application of torque. Peter Yeung at XS Engineering installed the new differential and adjusted the lash. The differential carrier was reassembled with a high-capacity GReddy differential cover and then filled with OS Giken’s OS- 250R 80W-250 gear oil. 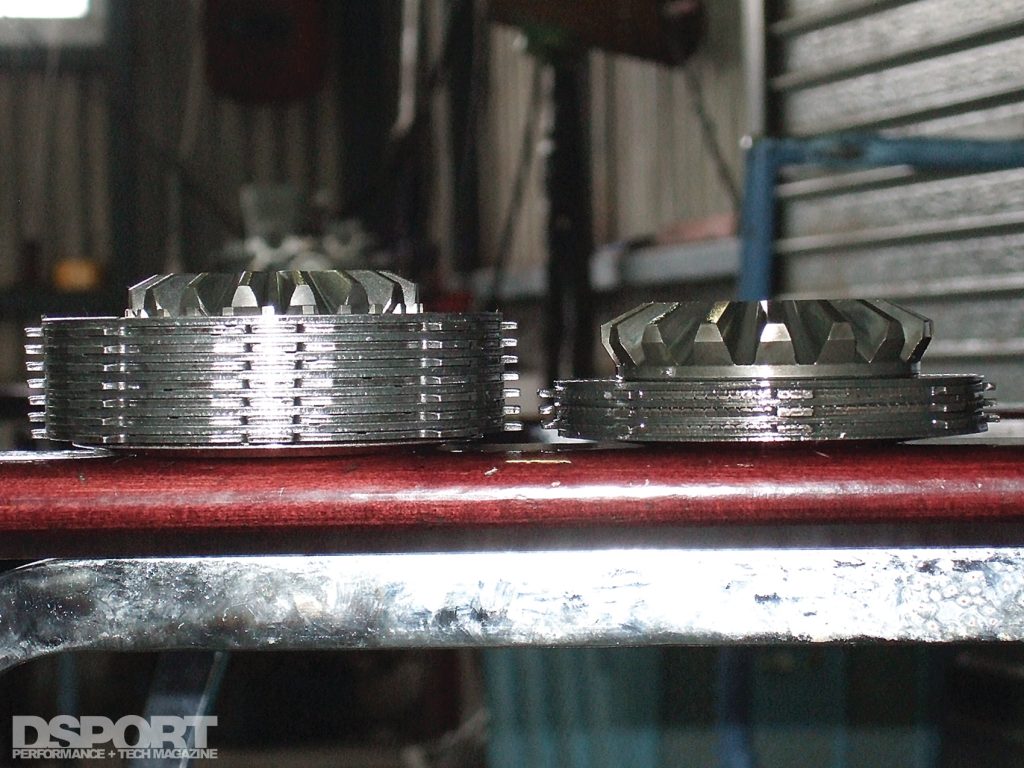 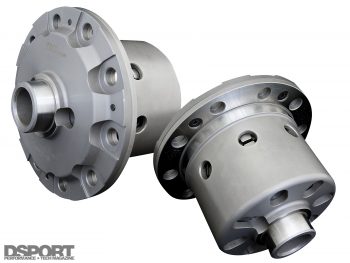 The road manners of the Super Lock LSD became apparent while testing the car. The first noticeable trait was the absence of “popping” and “clunking” through turns, a welcome improvement compared to other aftermarket differentials. Since the Super Lock required no break in, we put the Silvia immediately onto the track. At the Streets of Willow road course, exiting the decreasing radius turn at the top of the straightaway (clockwise) on cold tires and rolling onto the throttle too aggressively resulted in immediate lock and a loose back end. With the factory helical LSD, this didn’t happened. After properly warming up the tires, we noticed that acceleration through the turns was much more positive. Traction was dramatically improved, with our seat-of-the-pants dyno telling us that the application of power to the tarmac was much more efficient. The factory differential felt sluggish, as if it were not applying all of the available power to the drive wheels.