Ugly! There’s no other word to describe the performance of the KA24DE engine in stock form. Nissan tunes the KA24’s 2.4-liters of displacement to deliver just 155 horsepower at 5,600 RPM. Take the KA24DE under the knife and add a turbocharger system and you’ll see the “ugly” transforms into a knockout. With the KA24DE, Nissan accidently built a awesome foundation for a turbocharged four- cylinder engine. The engine’s large displacment drives turbos into boost quickly. The KA24DE’s connecting rods and crankshaft are also quite strong. With proper tuning and a well-engineered turbo system, 300 horsepower can be realized on the stock internals. Beyond 300 horsepower, the factory pistons often experience cracks on the ring lands and fail when a hint of detonation is encountered. For our KA24DE build, we’ll eliminate the weak links and add in some additional strength and reliability with Eagle connecting rods, JE Pistons, Clevite bearings and ARP fasteners. To maximize efficiency and produce more power per pound of boost pressure, we’ll also address the cylinder head and valvetrain to improve the engine’s volumetric efficiency. Staff Report • Photos By Michael Ferrara and Robert Choo Originally Published in Issue #89 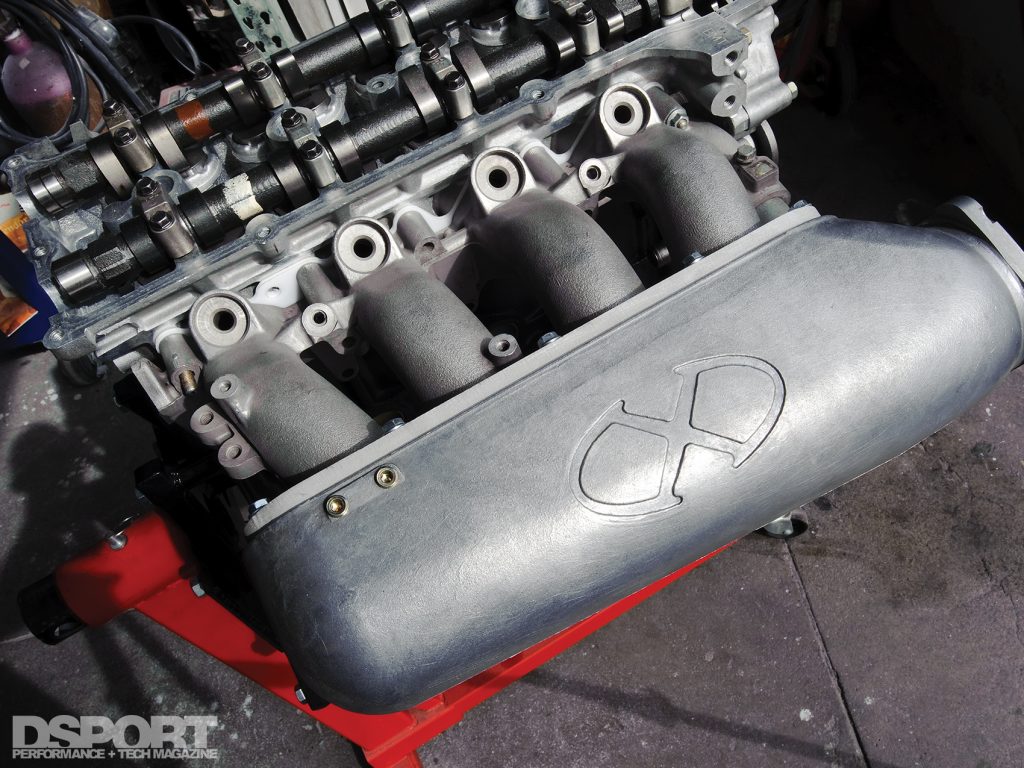 One of the biggest advantages the KA24DE engine has over the SR20DET is its iron block. Iron is significantly stronger than aluminum although it suffers a significant weight penalty. For the purpose of containing the extreme pressures in the combustion chamber, there is nothing better than a strong cast-iron block. Our KA24DE shortblock was sent to Cosworth USA for preparation. The block was resurfaced prior to assembling the BHJ deck plate with ARP fasteners. The BHJ deck plate simulates the distortion the piston bores exhibit when the cylinder head is secured to the block. This ensures the cylinder bores are absolutely perfect circles when the pistons are installed. The KA24DE was only overbored to 89.5mm, leaving plenty of material remaining between the bores. We selected 9.5:1 JE Pistons with the optional thermal barrier crown and anti-friction skirt coatings. The reduction in heat transfer from the thermal-barrier coating helps increase the engine’s performance by utilizing all of the combustion gasses to push down on the piston during the power stroke. The anti-friction coating on the piston skirts also reduces power loss as the piston moves up and down the cylinder bore. The pistons connect to the factory crankshaft by way of Eagle forged connecting rods. Cosworth performed a high-speed balance on the entire rotating assembly (pistons, rods, crankshaft, crank pulley and clutch/flywheel) for smooth operation. 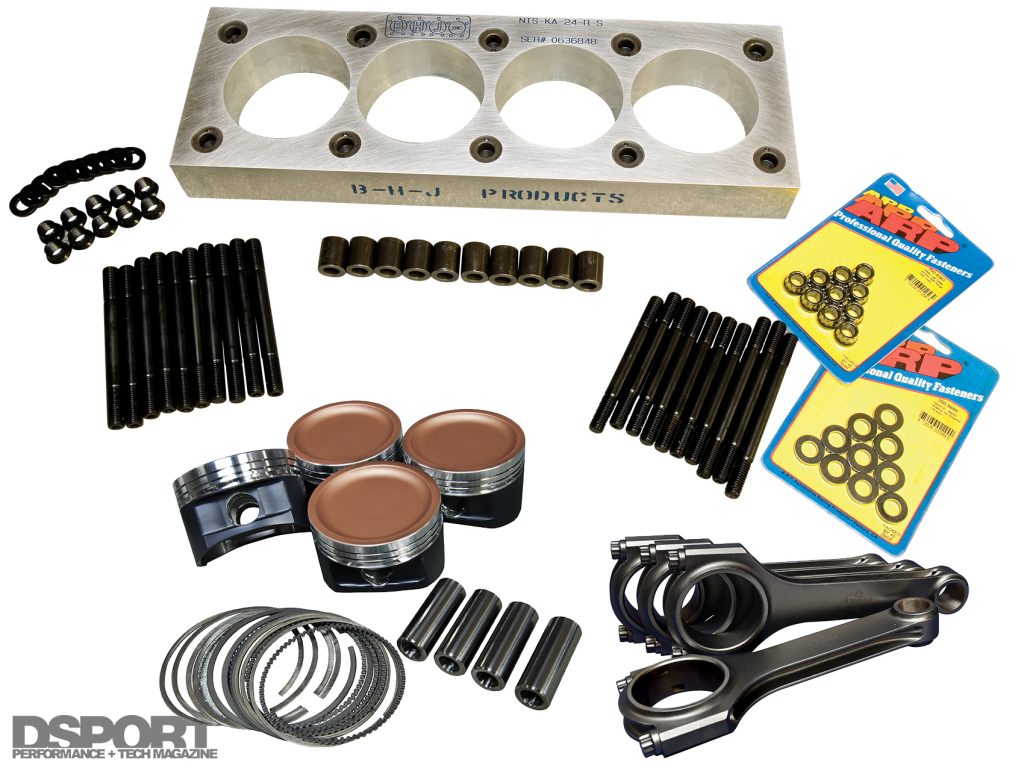 The factory KA24DE engine relies on a composite head gasket. Head gaskets made from composite materials are great at sealing imper- fections on the head and block surfaces. Unfortunately, the composite material often degrades over time, eventually leading to a blown head gasket. A Multi-Layer Steel head gasket is constructed from stamped or laser-cut sheets of steel thinly coated in Nitrile. The MLS gaskets do not degrade like their composite counterpart. When properly engineered, the MLSgasket is capable of containing higher cylinder pressures under boosted condition. The drawback of a MLS gasket is that the surface finish on both the cylinder head and block needs to be flat and smooth for the gasket to work properly. Surface imperfections can lead to cooling system leaks or combustion chamber gasses escaping under pressure. 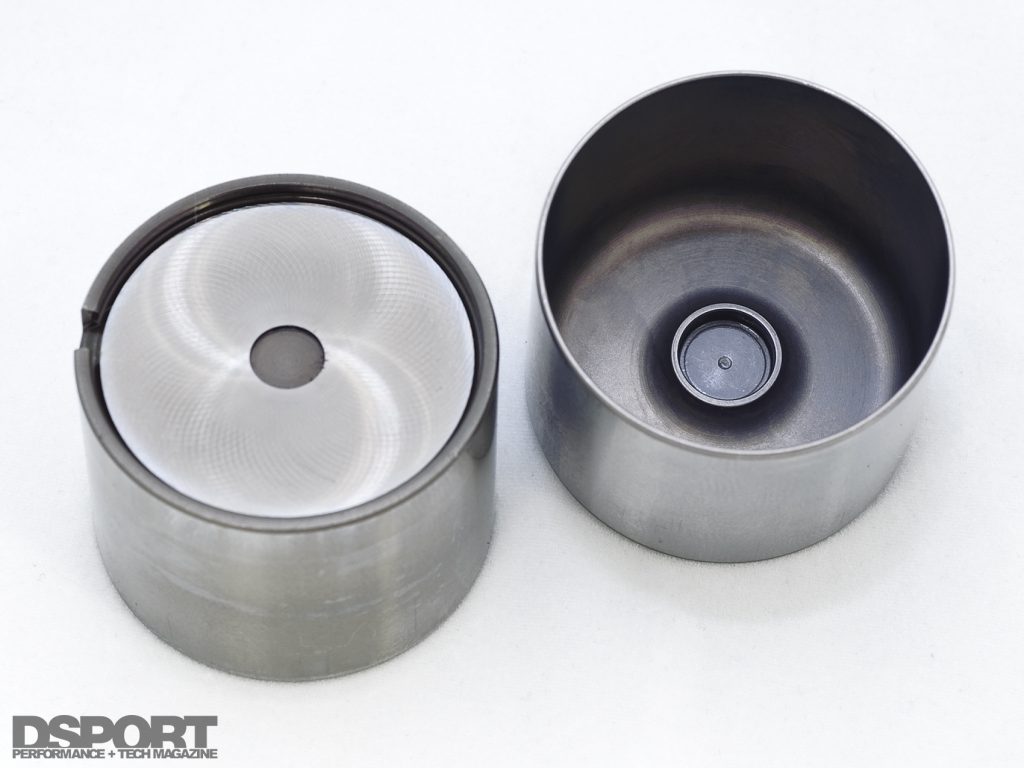 Unlike the SR20DET engine, which uses a rocker arm and hydraulic lifter to actuate the valves, the KA24DE engine incorporates a shim-over-bucket cam follower. The KA24’s bucket-type system is a superior design eliminating the chances of rocker arm or lifter failures at high-RPM. However, the factory KA24DE buckets incorporate heavy shims. During high-RPM operation, the valve springs not only have to combat the weight of the valve but also the weight of the bucket and shim. In some extreme cases, the KA24DE shims can dislodge at high-RPM. The Supertech-designed bucket-over-shim cam followers place the shims underneath the bucket. The design saves weight and eliminates the possibility of the shim becoming displaced. The Supertech buckets are also CNC- machined from heat-treated billet steel for increased rigidity and reduced weight. 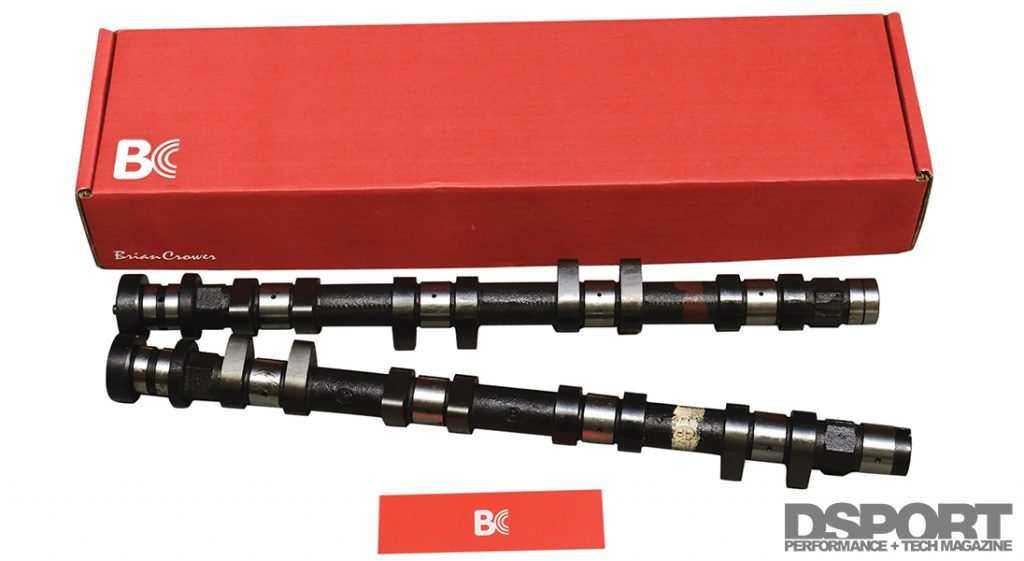 From looking at the specification of both camshafts it is clearly evident that the Brian Crower (BC) Stage 3 camshafts is significantly larger than the factory counterpart. The longer duration and increased valve lift will move the engine’s powerband higher in the RPM range. The BC Stage-3 camshafts are intended for fully-built engines and requires aftermarket springs and retainers. Some cylinder heads may require clearancing for the camshaft to operate properly.

Port Flow Design treated our KA24DE head to a port-and-polish before fitting the oversized Supertech stainless-steel valves and complementary valvetrain. Higher-tension Supertech valve springs and titanium retainers keep the valves on the seat. A pair of BC Brian Crower Stage-3 camshafts were selected to increase lift and duration for more power in the mid-to-high RPM range. Proper cam-to-bucket clearances were set by Port Flow Design after installation of the Supertech bucket-over-shim conversion kit. 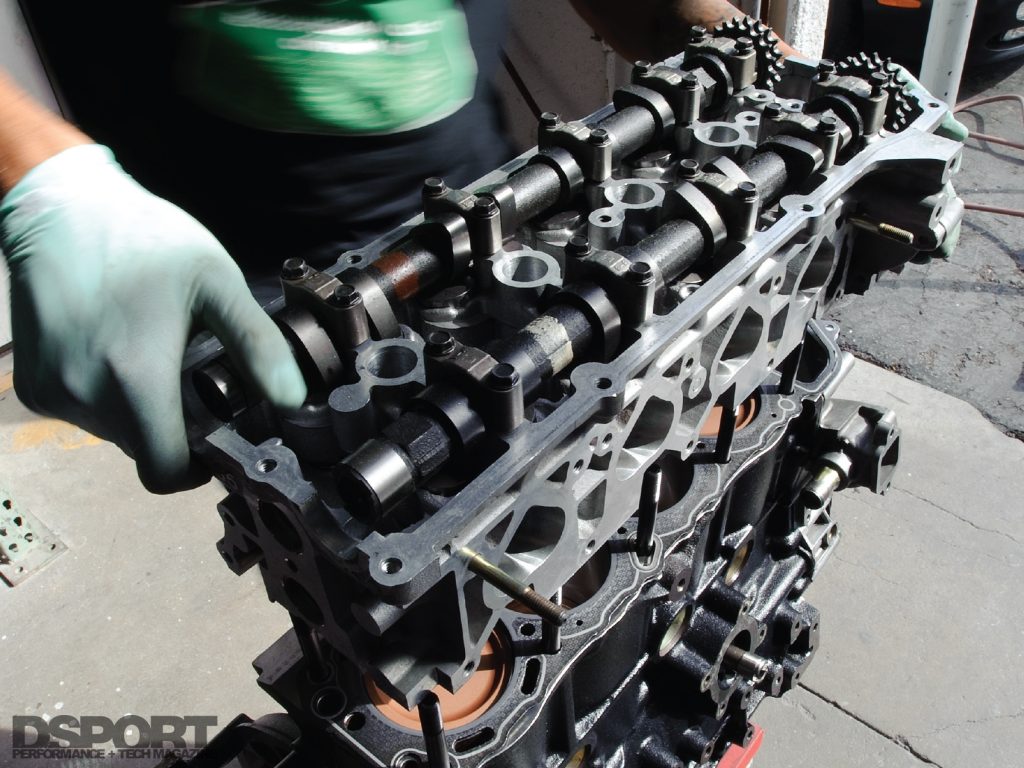 Pain is the Name of the Game

As we cinch the Cometic MLS head gasket between our built bottom end and upgraded cylinder head, there’ are just a few more hours of work that need to be completed to have the engine ready to drop in our 240SX. According to Jeren, he’s getting ready to deliver a heap of hurt to Richard’s SR20.

1. Wash and  2. Dry Prior to assembly, the block was thoroughly cleaned using a nylon brush and hot water with Simple Green solution. Clean the block thoroughly as dirt can score engine bearings causing premature failure. Once cleaned the block was dried using compress air and a heat gun. 3. Wipe The final step of the cleaning process is to wipe down the cylinder walls using automatic transmission fluid (ATF). Continue wiping with fresh paper towels and ATF until the towel stays clean. 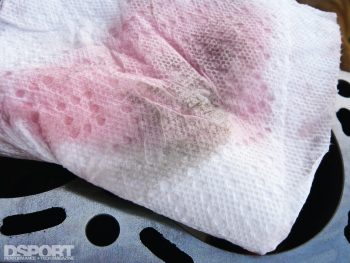 4. Install Bearings Clevite 77 bearings were used instead of the factory bearings. The Clevite bearings feature a tri-metal design for superior strength and durability. 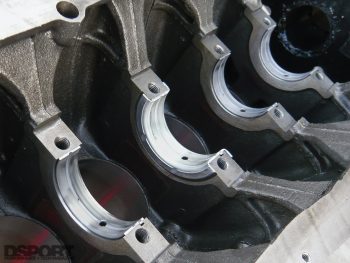 5. Measure Each piston ring end gap was measured and filed for proper clearance before being installed onto the pistons. 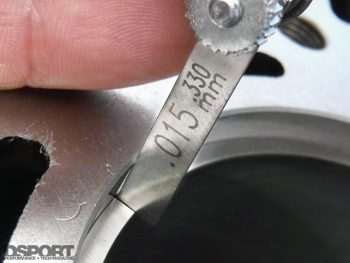 6. Use Plastiguage As a precaution, each and every bearing clearance was checked with Plastigauge. A small strip of Plastigauge was placed onto eaach journal and then the main cap was torqued to specification. The thickness of the crushed Plastigauge determines the clearance of the bearing. 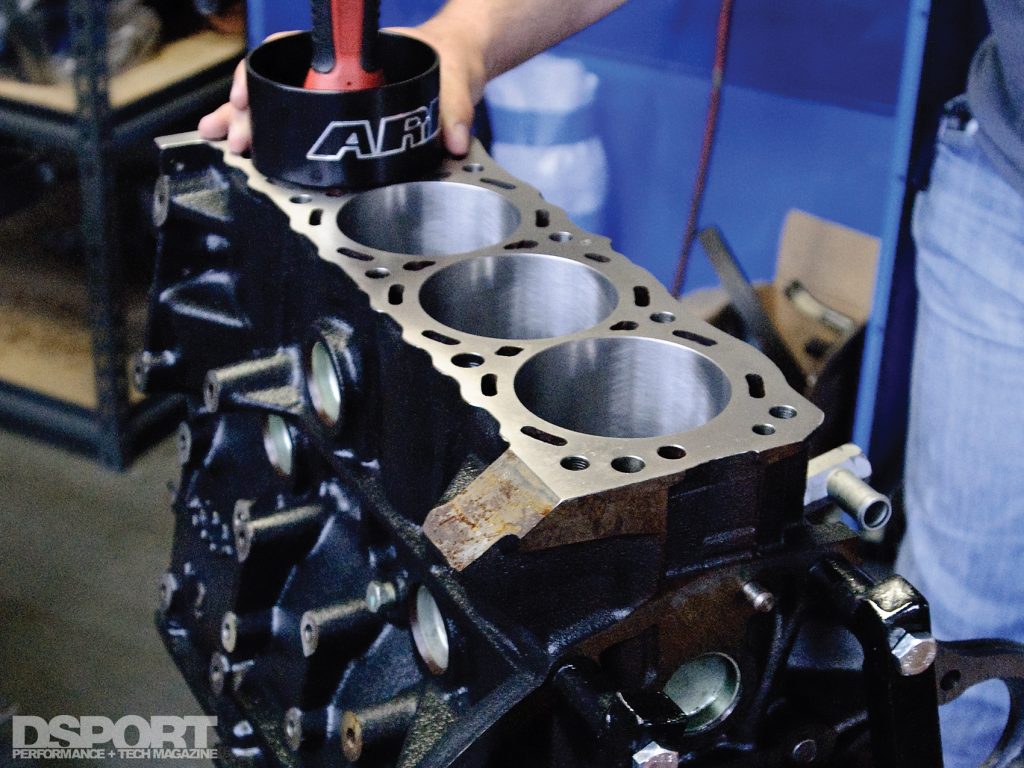