One of the hottest cars for the tuner market is arguably the Mitsubishi Lancer Evolution VIII. Its high-output turbocharged four-cylinder engine and all-wheel-drive configuration make it an ideal platform for performance upgrades. In our September issue, we demonstrated some of the performance potential of this vehicle when we evaluated the Buschur Racing Stage 1 performance package. Since that article, we’ve been fortunate to get another EVO-VIII in our stable of performance vehicles. With this EVO, it will be our goal to show case the entire HKS performance parts lineup for the EVO-VIII as we gain first-hand product knowledge and direct dyno experience with the parts. The end product should be a very reliable, daily driver that can run deep into the 11s.

The Good, the Bad & the Ugly 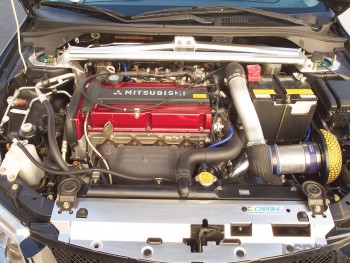 First, the Good. The EVO-VIII 4G63T engine has proven its prowess in earlier generation versions that powered the first and second-generation DSMs. This version of the 4G63T shares many of the same strengths and some additional performance benefits. The 4G63T engine featured a high-rigidity cast-iron block. The OEM crank is just about indestructible while the factory rods and pistons are generally good to the 400-horsepower range. The turbocharger on the EVO-VIII is a Mitsubishi TD05H-16G. This turbo offers great response and performance up to the 320-350 wheel horsepower range. With race gas in the tank, some have even pushed the factory turbo to the 380 horsepower range. From a mechanical standpoint, the EVO’s engine is ready to rock. Now, the Bad. The factory ECU that controls the fuel, boost and spark delivery to the engine is configured to be uncooperative with performance modifications. When performance parts are installed on an EVO-VIII and airflow into the engine is increased (as read through the vehicle’s mass airflow sensor), the factory ECU will try to “fix” this by reducing the boost pressure to get back to the “expected” mass air reading with a factory engine. As you have probably guessed, power gains are minimal or sometimes not seen at all when the factory ECU reduces the boost pressure. While the high-performance exhaust may have provided the “potential” to make an additional 10 horsepower, the factory ECU will often adjust the boost pressure to a lower setting so that little or no horsepower gain is realized. The simplest solution to this performance obstacle from the factory ECU is to take away the boost control from the ECU. Buschur Racing’s Stage 1 package we tested in our September issue used a simple, yet effective manual boost controller. We decided to invest a few more dollars in our boost control solution to have the advantage of making exact and accurate changes to the boost pressure whenever we decide to push a little harder or run some race gas instead of pump gas. Our HKS electronic boost controller will allow us to make boost changes at the push of a button. Finally, the Ugly. In addition to adversely affecting performance by the reduction of boost control, the factory ECU can prove to be very bad at providing repeatable results on the dyno. The reason for this can be traced to how the factory ECU controls ignition timing. The factory ECU contains a number of different timing maps that provide ignition timing based on load (as determined by the mass air sensor readings) and by engine speed (rpm). Some of these maps have aggressive spark timing for high-quality gasoline and high-altitude operation. Other ignition maps in the factory ECU as configured for low-quality fuel and ultrahigh load operation. The ECU chooses which map to run depending on how much knock is recorded by the factory knock sensor. In practice, the factory ECU will generally try to run a moreaggressive map first and then when knock is encountered; it will switch back to a less-aggressive map. One way to avoid this during testing is to switch to a high-enough octane fuel so that the timing can always stay on the mostaggressive map. With 91-octane gasoline in the tank, we experienced that the timing and power output would be very inconsistent from one dyno run to the next. Some 100-octane unleaded would have been the perfect band-aid in the short run for our tests. However, we needed a long-term solution as we plan to have this EVO project ongoing over the course of the next 12 months. To this end, we needed to source some type of stand-alone engine management solution.
Pages: 1 2 3 4
On April 13, 2004