Exhaust systems serve as one of the most important upgrade decisions you’ll make for your car. This hardware determines in part how your car will look, sound and perform. It makes a statement on what type of enthusiast you are, as car owners look for different benefits and characteristics. But how do you determine which exhaust best fits your needs? We decided to do the dirty work for you, as we selected 12 currently available exhaust systems for the 2015+ Subaru WRX and STI, and thoroughly evaluated their sound, appearance, build quality and performance on our D’Garage 2017 Subaru WRX STI. 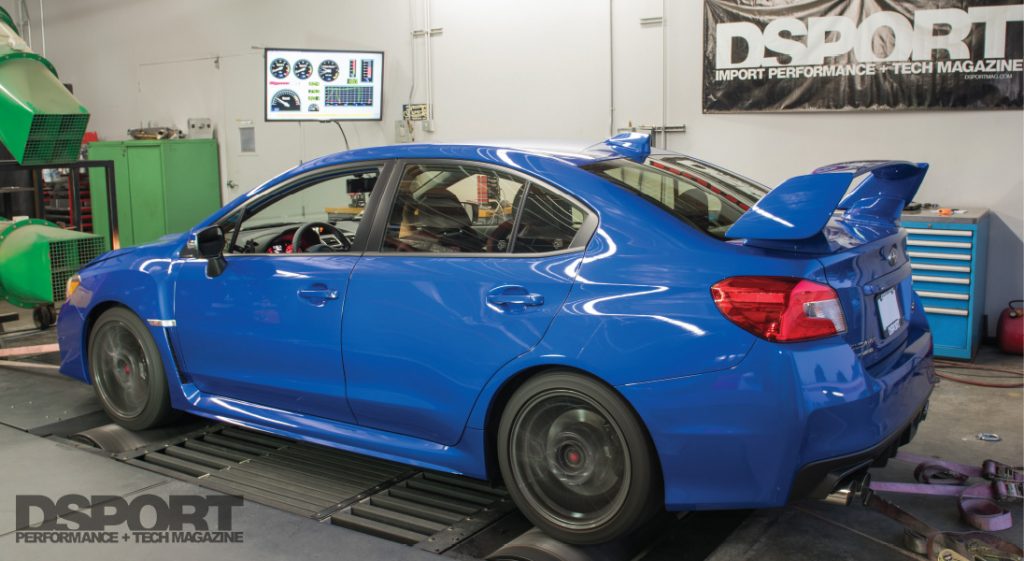 In order to achieve the best and most consistent results in our test, we evaluated each exhaust system on the same vehicle with the same testing equipment. This begins with the Dynojet 424xLC2 Linx AWD dynamometer, which we used to prove the horsepower and torque across the RPM range. To capture sound levels, we placed a Radio Shack Sound Level Meter (33-2055) 20 inches from the exhaust tips at a 45-degree angle, and revved the engine to select RPMs. This method complies with California’s Vehicle Code, Section 27151, which states a maximum legal sound level of 95 decibels. For our WRX STI, the legal limit of 95 decibels applies specifically at 4,500 RPM. Adding to the sound tests, we test drove the car with each exhaust installed, measuring peak sound levels from the cabin when idling, cruising at 2,500 RPM in fourth gear, and flooring the accelerator from first to fourth gear. We also weighed each system, drawing comparisons against the 40.8-lb factory exhaust. Based on collected opinions from the DSPORT staff, we rated the different characteristics of each exhaust system on a one-to-five scale, five being the most favored (most power, quietest, lowest weight, most affordable). Each exhaust carries its own share of unique benefits that appeal to different users, so explore our findings and scan the QR codes to see and hear the exhausts in action to determine your personal favorite. 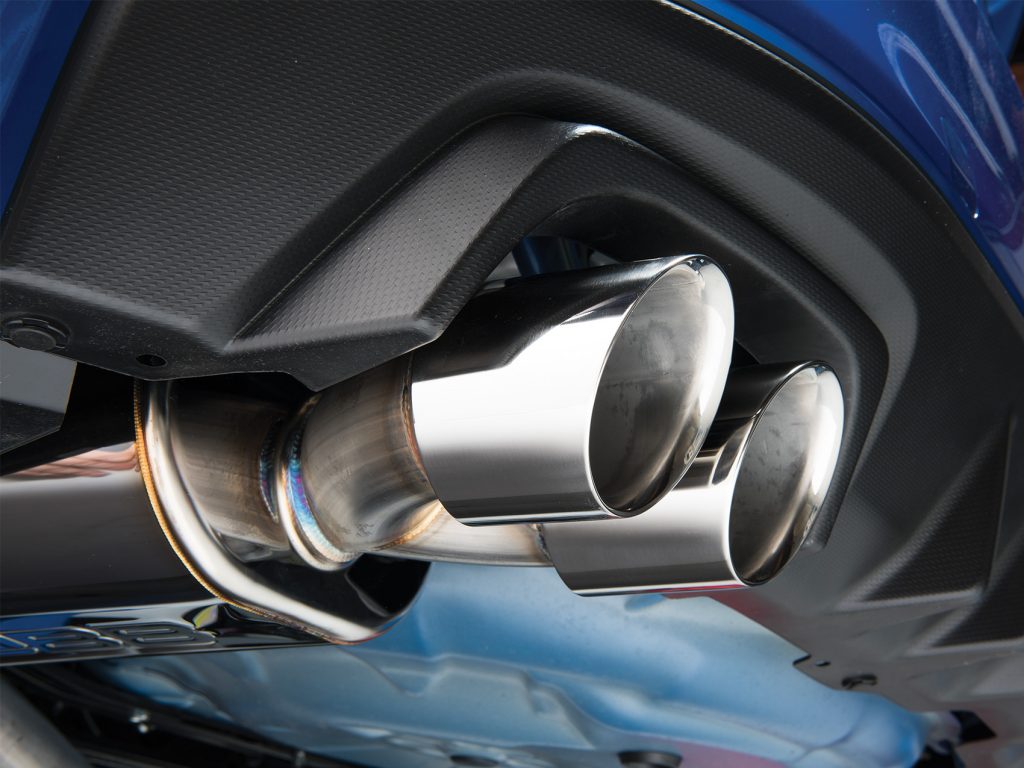 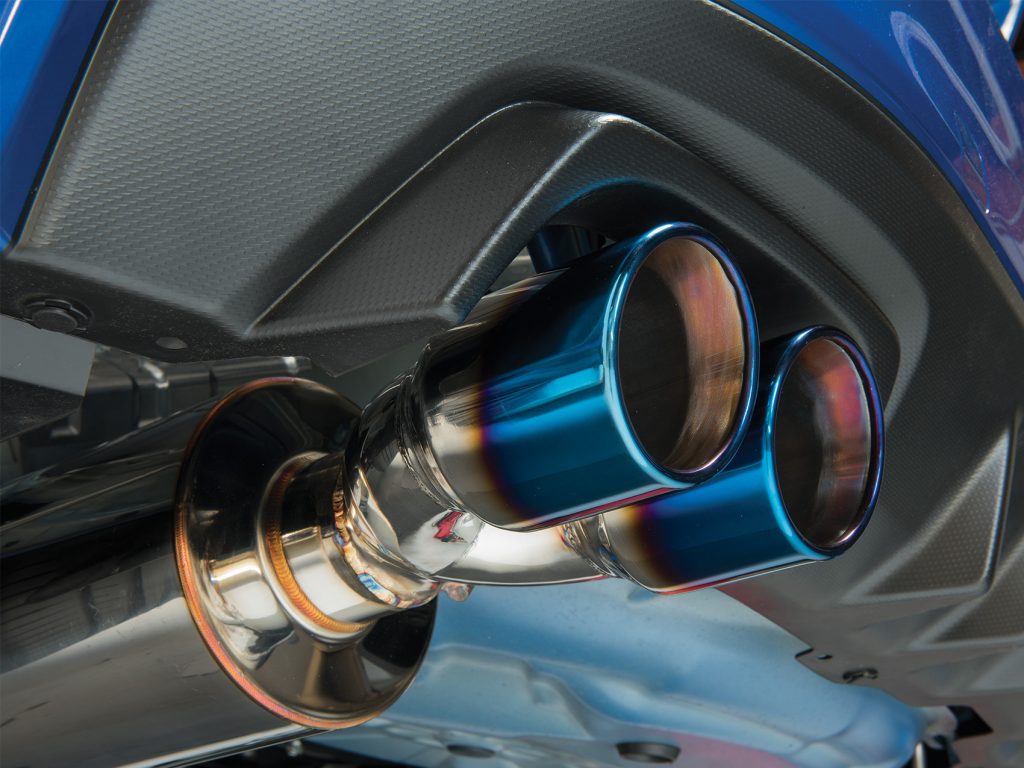 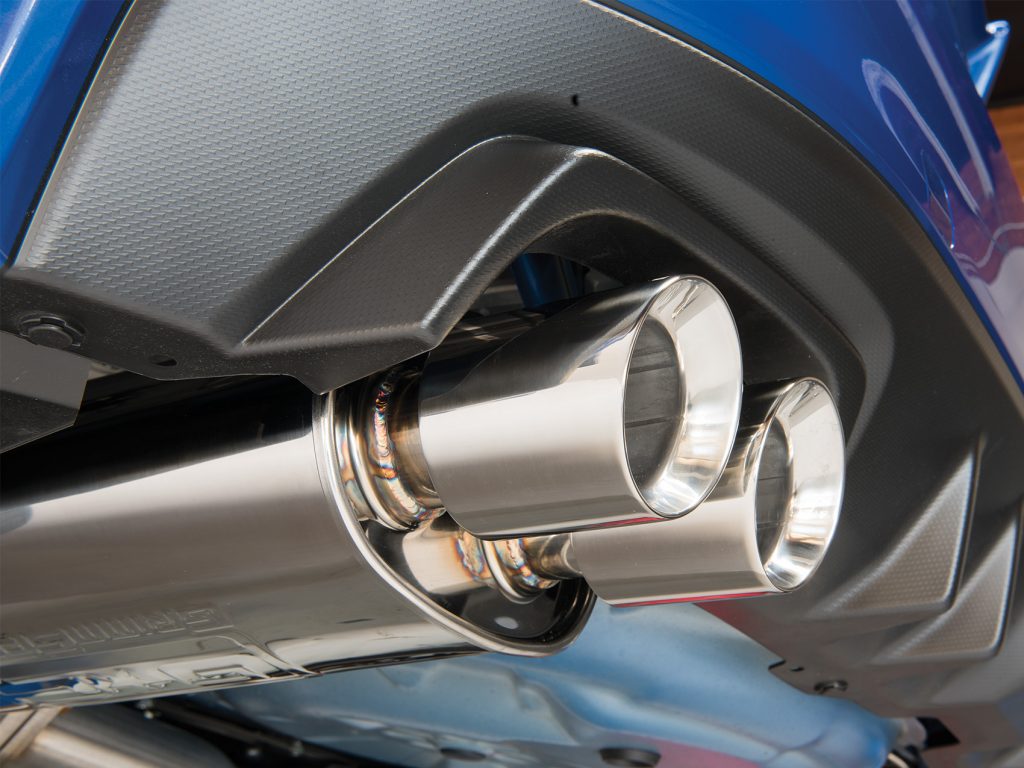 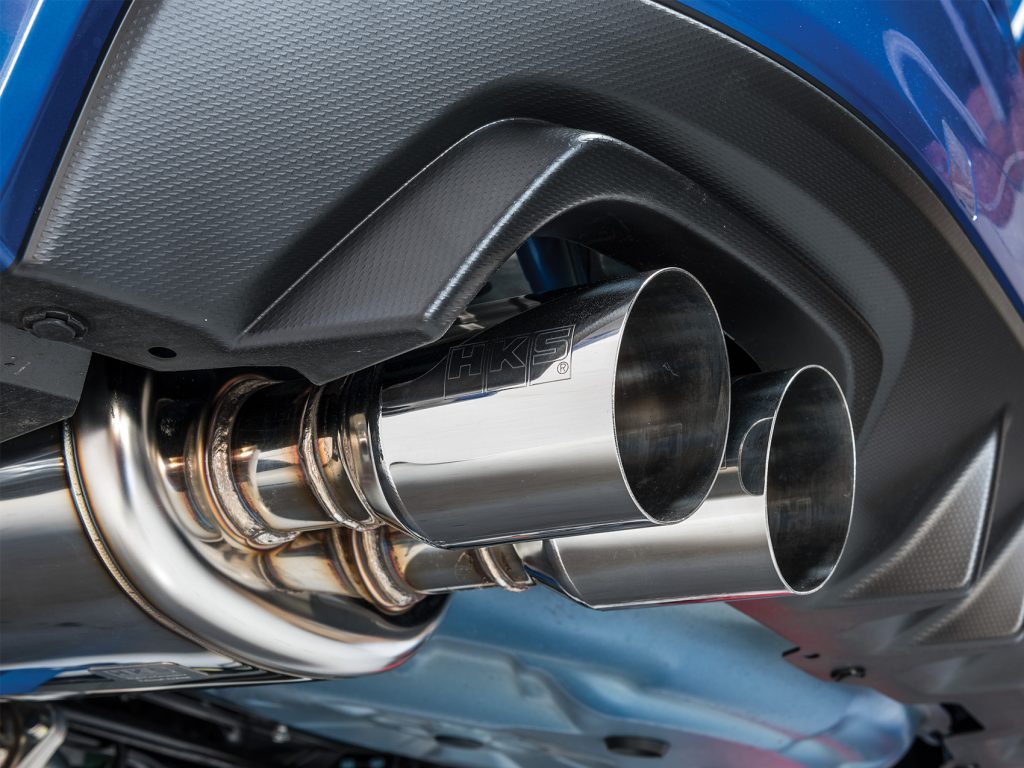 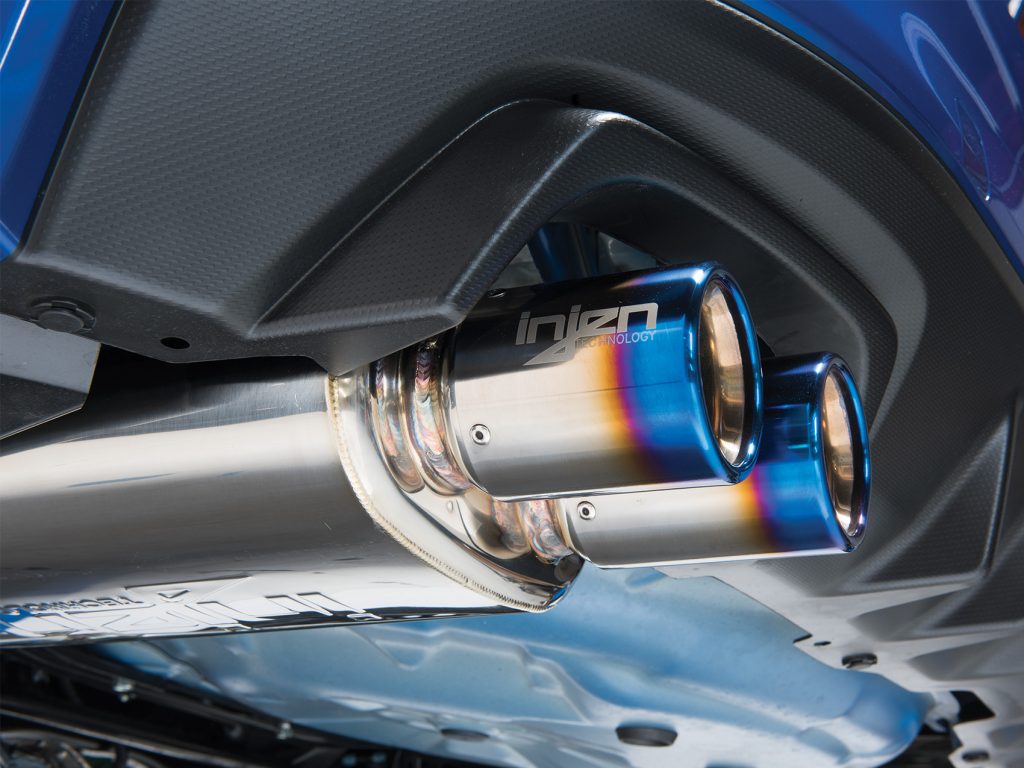 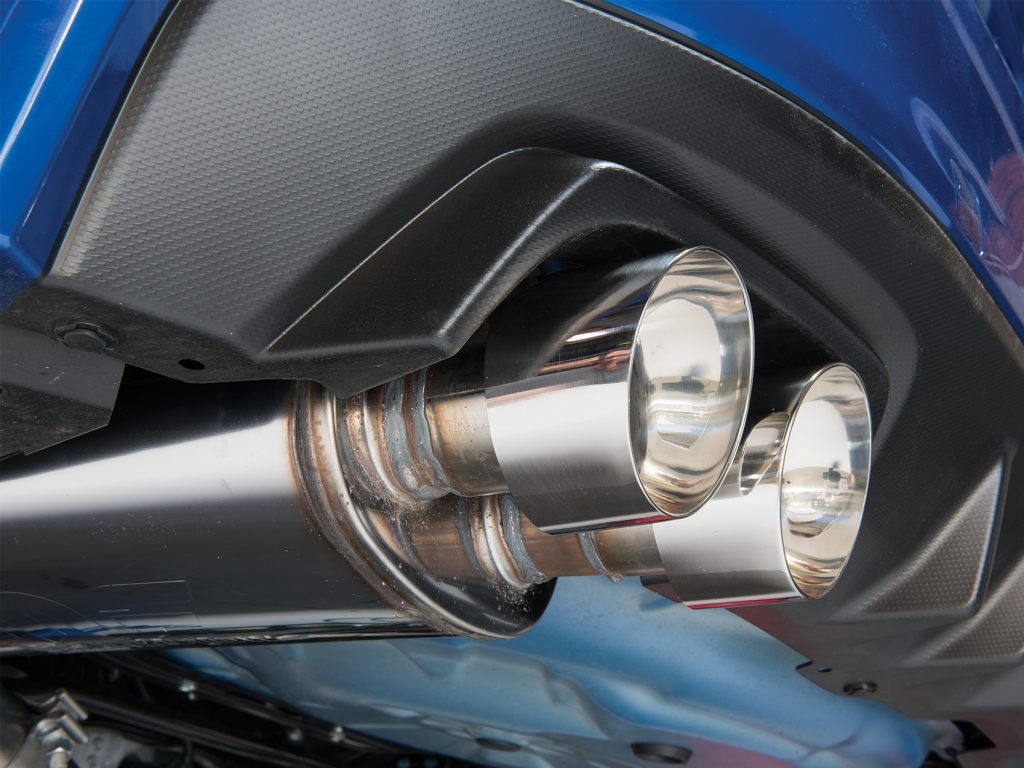 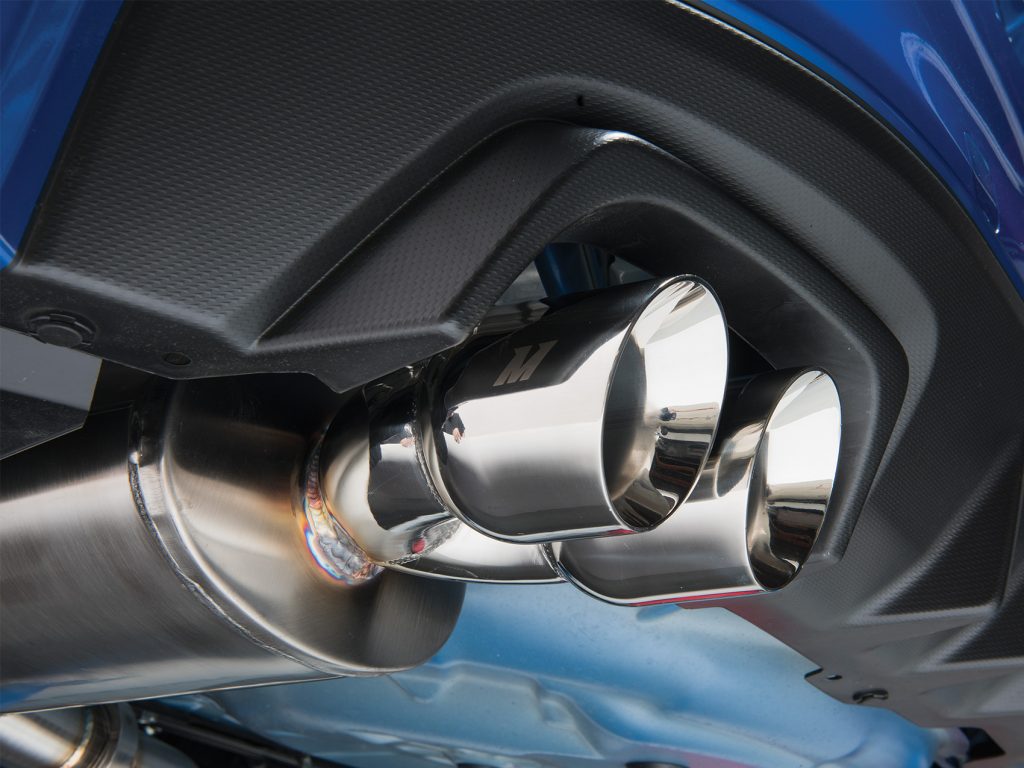 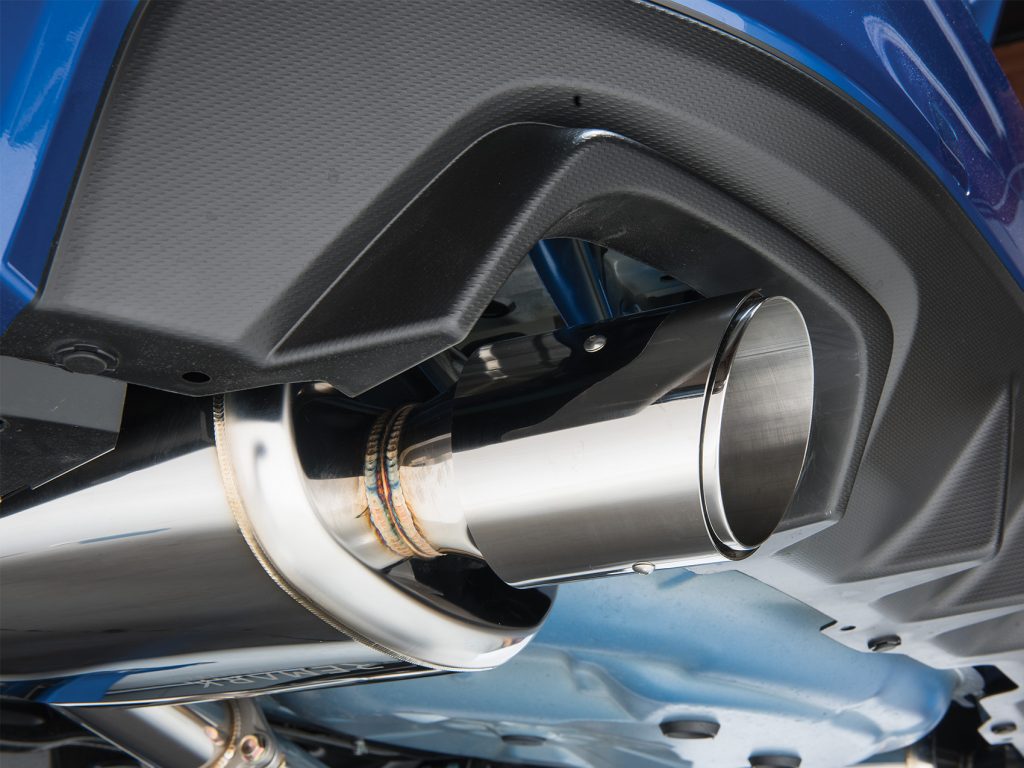 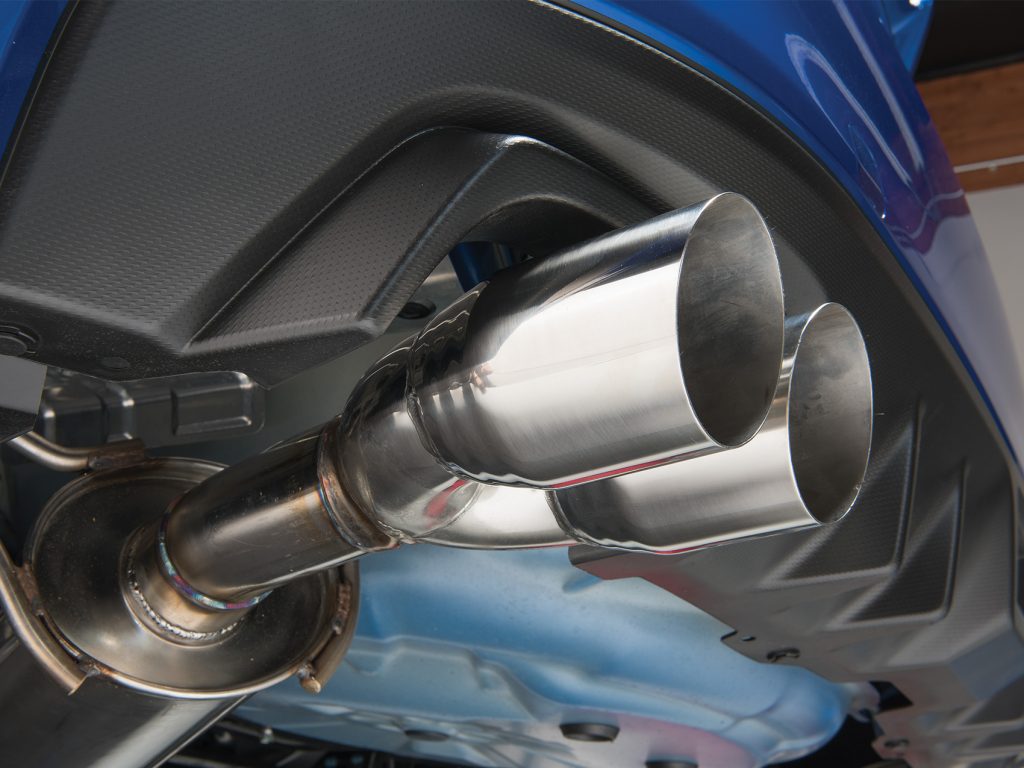 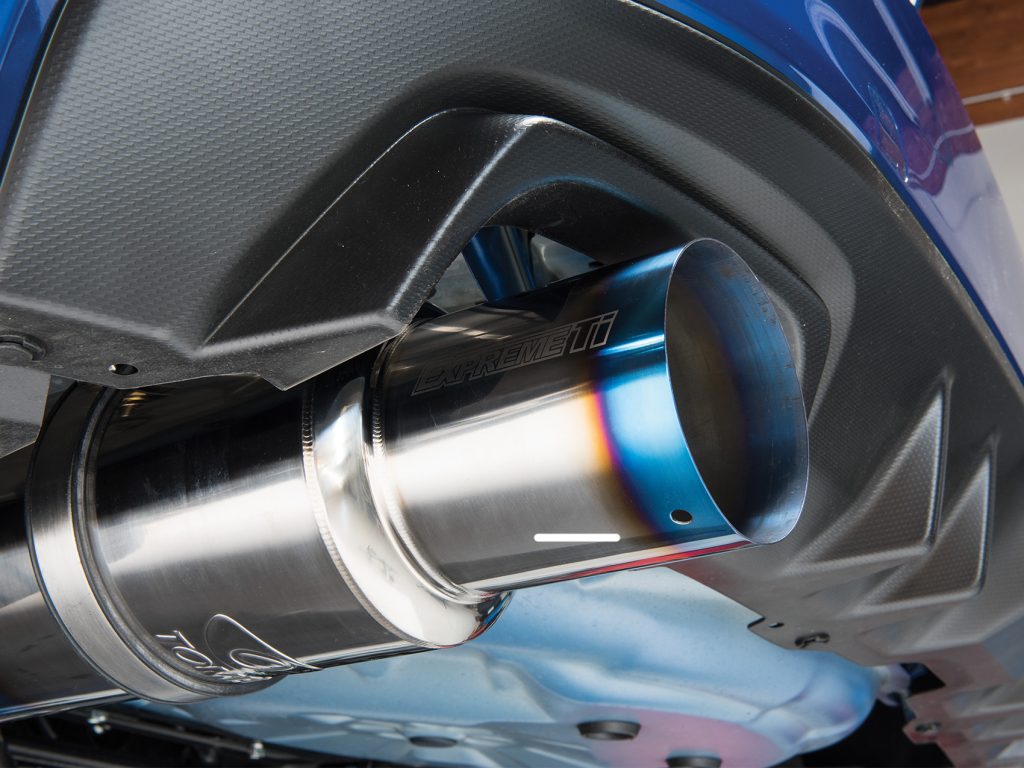 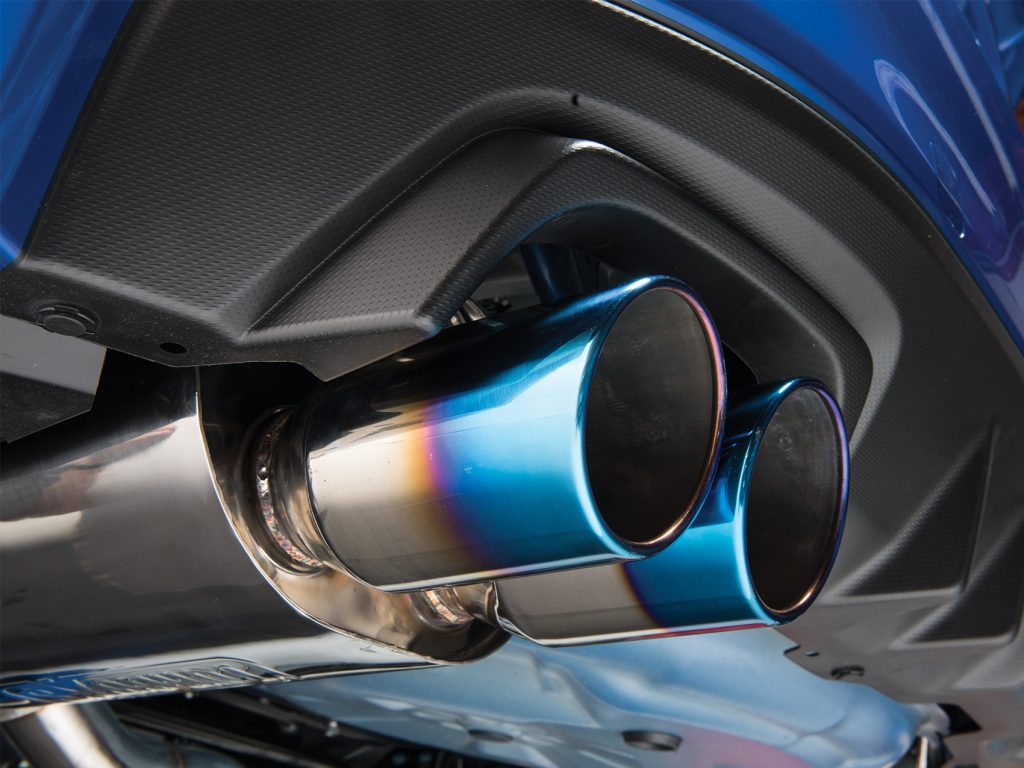 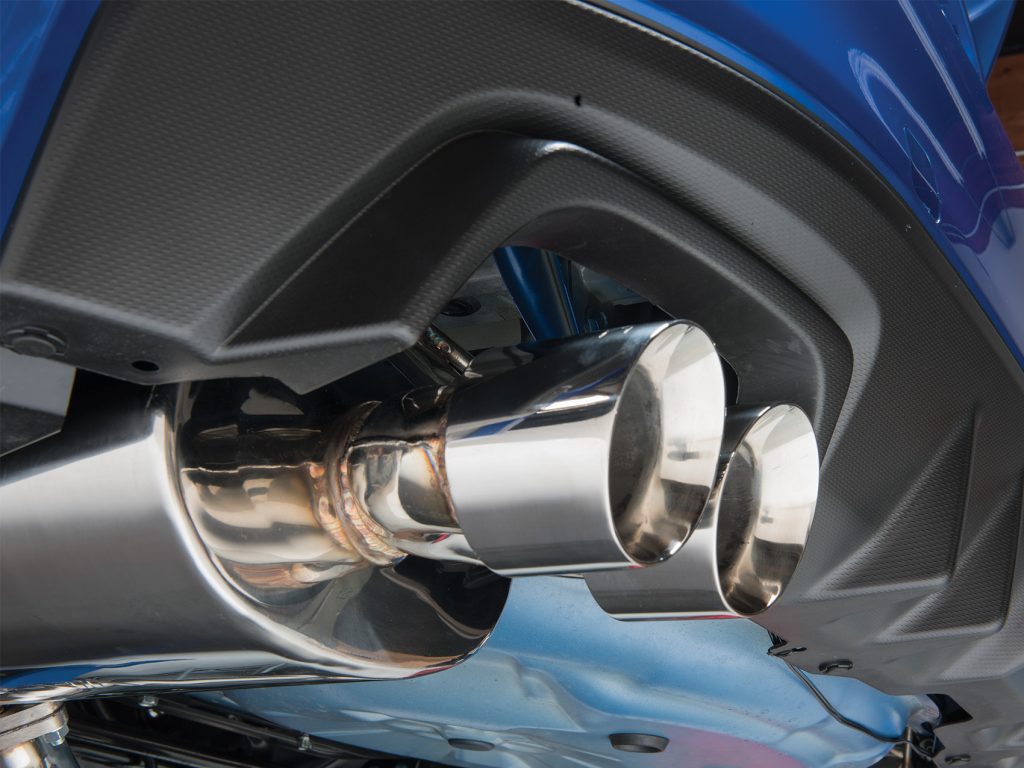 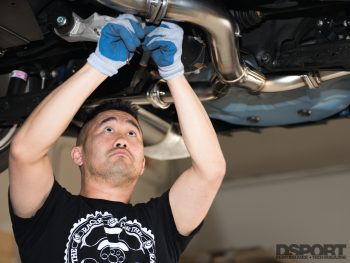 After days of installations and testing, we evaluated a range of exhaust options for the VA-chassis Subaru WRX STI with some notable findings. It turns out the factory exhaust on the STI is lighter-weight than we expected, measuring at 40.8 lbs. This means that only five of the 12 tested exhausts helped reduced weight, while the remaining seven either maintained roughly the same weight or even added 10 to 12 pounds. Tomei won in this department, with its titanium configuration bringing the Expreme Ti exhaust down to just 14 lbs. total, 26 lbs. lighter than stock. Remark deserves mention, as it produced the lightest stainless-steel exhaust at 34.5 lbs., 6.3 lbs. under the factory setup.

In terms of sound, each exhaust differed greatly from the other during our tests. While XForce’s system with Varex mufflers was by far the quietest, our staff enjoyed the growling exhaust notes played by the Extreme Turbo Systems and Injen exhausts. Manufacturers like HKS and TurboXS managed to maintain the trademark EJ rumble, while maintaining composed, low volumes below 90 decibels at all RPMs. On the opposite end, enthusiasts who enjoy making a loud statement with their exhausts would take a liking to the Tomei, Magnaflow, SubiSpeed and Injen productions. 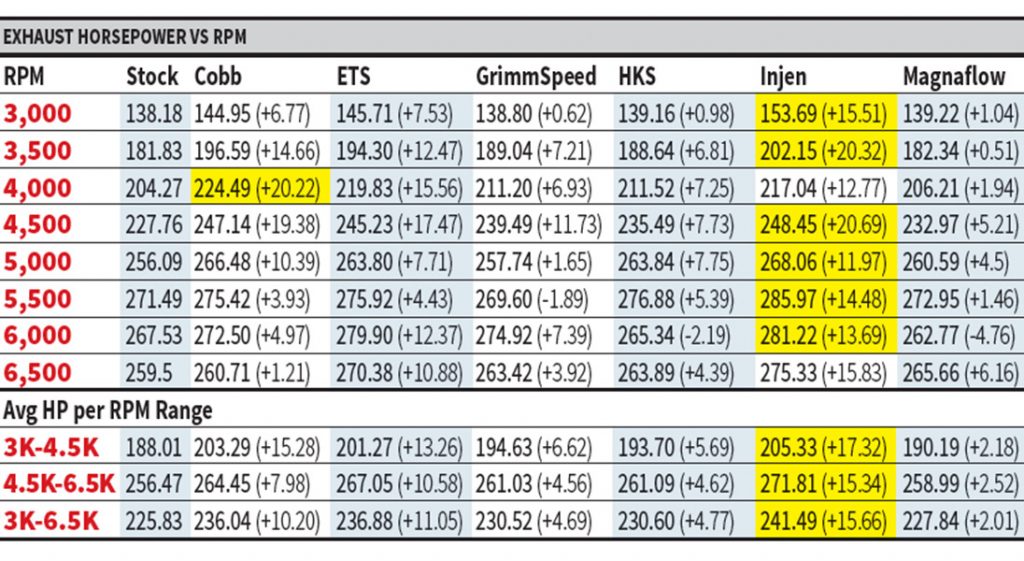 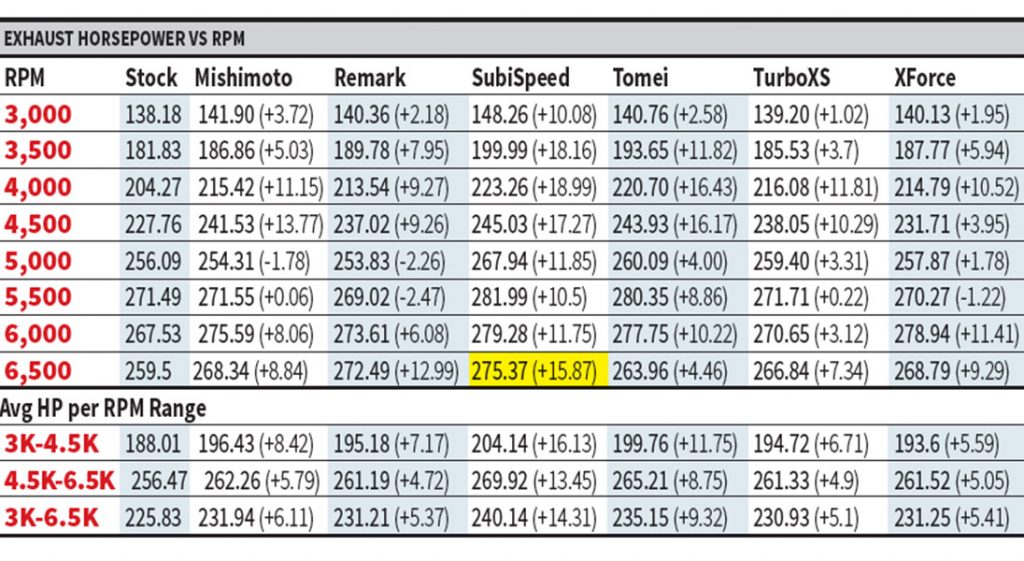 After testing each product on the dyno, we found different exhausts carrying strengths in different areas. SubiSpeed offered the greatest peak power numbers with steady gains across the power band, with Cobb coming in not far behind. GrimmSpeed, Mishimoto and Remark performed exceptionally well at keeping horsepower up beyond the 6,000 RPM mark, where the factory exhaust normally quickly dropped off. All 12 exhausts showed power and torque improvements, some greater than others and at different RPMs. The gains made from these exhaust systems made the car much more enjoyable to drive, as it was able to pull through the RPMs without hitting a significant power wall. 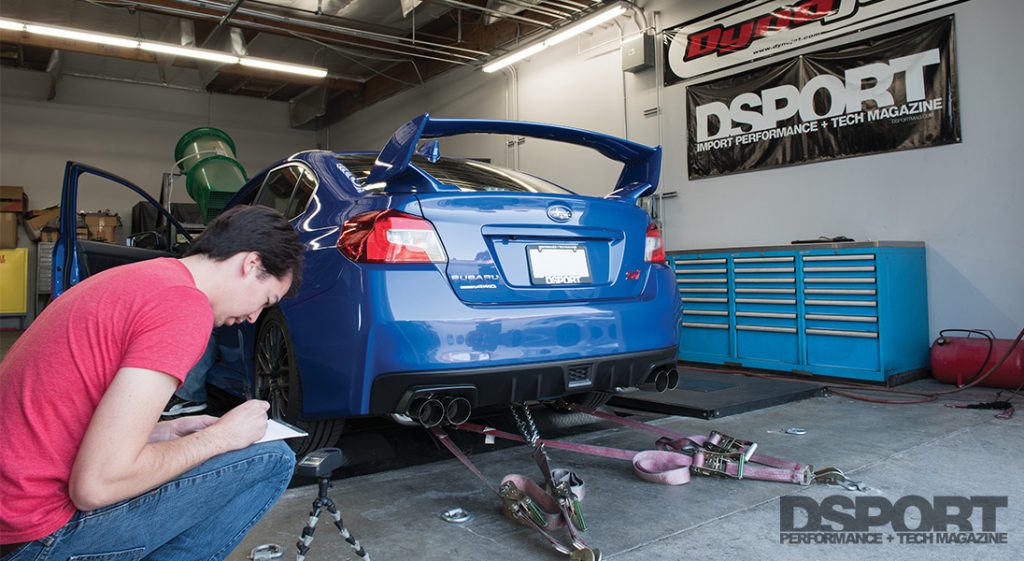 We found different strengths in each of the 12 exhaust systems but at the end of the day, the choice is yours to make. Fortunately, each exhaust holds unique advantages in sound, power, craftsmanship and affordability so that owners can select an exhaust system best fit for their needs.